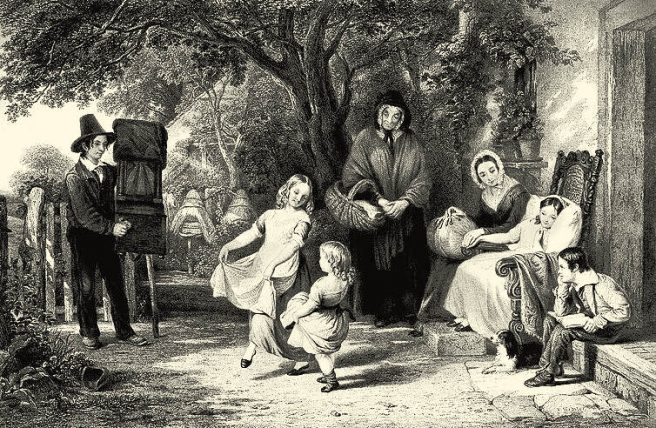 Noise nuisance, it would appear, is not a modern problem.  The soundscape of Victorian London was redolent with the clatter of horse-drawn vehicles, bustling railway stations, cries of costermongers, barking stray dogs and incessant street music—all of which, particularly the last, could drive Londoners, such as Mr Thomas James Rawlins, to distraction.

In 1861 Henry Mayhew estimated that there were approximately 1,000 street musicians plying their trade in London.  Given that there were said to be about 10,500 streets and lanes in the capital, this works out as 10.5 streets per musician—which might explain why there were so many complaints about noise pollution.  Books, newspapers articles and letters on the subject, mostly from the moneyed middle and upper classes, make uncomfortable reading to a modern sensibility, with their open hostility to the working classes for playing or encouraging street music, and evident xenophobia, as many of street musicians were from Italy, France and Germany escaping poverty, war and social upheaval.1 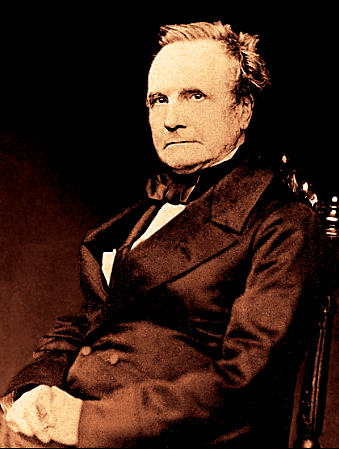 Photograph of Charles Babbage in 1860.

However unpleasantly such sentiments are expressed, it can’t be denied that some people found street music very inconvenient and distressing: the mathematician Charles Babbage of Dorset Square declaring that this noise deprived him of a quarter of his working time; John Leech, illustrator of A Christmas Carol, leaving Bloomsbury for Kensington in the hope of finding peace – he didn’t – and noise nuisance was said to have contributed to his death; Thomas Carlyle hiding in his (not very effective) sound-proof room; Anthony Trollope battling with a German band when living in Montagu Square.

Let’s see how the noise nuisance affected an ordinary resident of Bloomsbury.  Mr Thomas James Rawlins lived at 38 University Street, a thoroughfare running between Tottenham Court Road and Gower Street only a stone’s throw from University College London.  Not then quite as salubrious an area as it is today: to the south was Mortimer Market, “a low neighbourhood an area not much frequented by respectable folk” (to quote Mr Rawlins).  He also said that some houses opposite his were remarkable for the number of women who lived there, and who could be seen at the windows at all hours of the day.  Presumably he is suggesting it was a brothel.

Thomas, born in Lambeth in 1802, had a varied career path.  Records show that after being in the employ of the East India Company in Calcutta he variously worked as an artist for a lithographer, as a professor of drawing at St Mark’s College in Chelsea, as Professor of Drawing and Fortification at the splendidly named College of Agriculture and Chemistry and of General and Practical Science at 38-39 Kennington Lane, as an army examinations tutor, as a civil engineer, as an architect, and as co-illustrator of a book by Nimrod, namely The Life of John Mytton Esq, and maybe of more.

His married life was equally complicated.  In India he was both married and widowed before he was thirty.  He and his second wife, Martha, had two children who died young.  This may have contributed to their marital breakdown: in 1851 a Thomas James Bailey Rawlins bigamously married Susanna Jefferson at St Pancras Church.  I can find no records of an ecclesiastical divorce, and civil divorce was only possible after 1857.

Thomas’s first recorded legal skirmish with a street musician takes place in November 1857.  After Felice Onzi was told to move away with his organ from Number 38, a neighbour invited him to come and play the instrument in their house across the street, leaving the door open so the music was still audible.  When Onzi left the house, he was arrested for ignoring the original request to leave by Rawlins.  Two female neighbours attended the police court, disrupting proceedings and complaining that Rawlins deprived them of music, as he was always sending organ grinders away.  On being told that if he repeated the offence he’d be fined forty shillings, Onzi grinned and declared he had no money.  He was less cheerful when told that the alternative would be a sojourn in prison

In November1859 Rawlins is again in court. 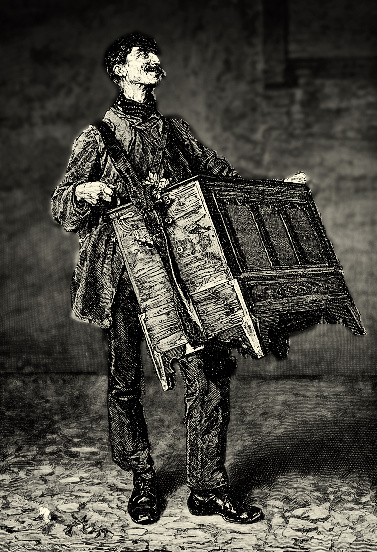 In 1860 an organ grinder called Facinelli Giovanni had frequented University Street every Saturday for four months—at the invitations of the neighbours—his stated aim being “to have a bit of fun.”  He is described as a “truculent-looking organ grinder” by the London Evening Standard.  On a Saturday in mid-July Rawlins’s maid went to send the man away using the Italian for “Go away!” and “Somebody’s sick!”—the phrases she had been taught precisely for that purpose.  Facinelli responded by telling her to go away herself.  When an angry Mr Rawlins appeared, Facinelli rushed into the hallway of 38 and roundly abused the householder, calling him a villain, a robber and hellish heretic (in English and Italian).  A sixty-strong crowd watched him being taken into custody.

In court Mr Rawlins explained that he suffered from a “… chronic determination of blood to the head, only relieved by copious bleeding as a result of having brain fever in India.”  He explained that he wasn’t the only sufferer in his house, it being home to an invalid lady who was “rendered both speechless and senseless” by the incessant music.  Facinelli was fined twenty shillings.

Five months later in December 1860 Giuseppe Mersiani, a native of Parma who had been in London for four weeks, was taken to court.  Rawlins explained pitifully that he had already taken twelve organ grinders to court, and that his only desire was to be left alone.  When it was known that there were invalids in his house, up to twenty men a day were sent to play, expecting payment before they would leave.  His neighbours supported him in his campaign against the organ grinders, all, that is, except for one group—presumably the good-time girls in the house across the road.

On Monday 24 June 1861 Mr Rawlins was ill in bed, his rest having been disturbed for a period of two hours by a steady trickle of organ grinders.  Martha Dockerell, his sixteen-year-old maid, was sent to chase them away in her rudimentary Italian.  Giuseppe Biuccharin refused to leave and continued grinding.  There was obviously nothing for it, so Mr Rawlins dragged himself from his sick bed, got dressed and ordered the man to leave.  When arrested and taken to court, Biuccharin said, through an interpreter, that he hadn’t understood that he was being asked to leave, as he did not speak English.  His linguistic abilities miraculously improved when asked to pay a five shilling fine.  He explained, in English, that he did not have the money,  but managed to find some when the magistrate explained that his organ would be sold to pay the fine.

In September 1862 Louis Pini finds himself brought to court by Mr Rawlins for organ grinding. 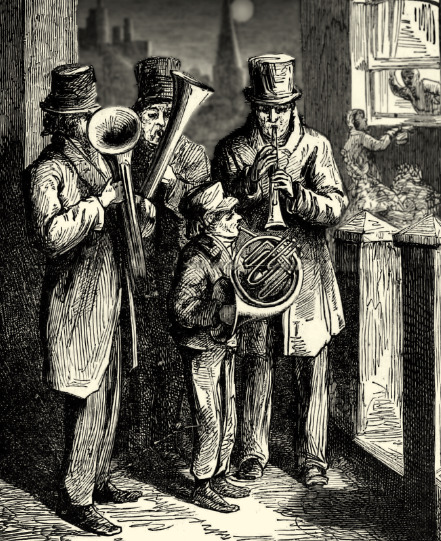 A month later, on his way to yet another court appearance, Rawlins is accosted by his neighbour, who declares: “We have made up our minds to annoy you.  I will go on getting these men to play in front of my house.”  In court Giuseppe Francisco’s padrone—his boss or master—was summoned by the magistrate and ordered to stop the musicians annoying Mr Rawlins.  He paid the fine of ten shillings for Giuseppe.

Perhaps one might imagine Mr Rawlins’s luck would change after an Act was passed in 1864 to improve the regulation of street music.  But it was not to be—perhaps skip the rest of this paragraph if you are of a queasy disposition.  In 1865 he had an accident with a cab horse resulting in a ruptured bladder, abscesses, leakage and a twice-burst stomach.  He spent the rest of his days an incurable invalid, but his miseries didn’t end there.

In August 1867 Guillaume Dubois and his twelve-year-old son arrived in University Street.  With them were a barrel organ, for the father, and a large drum in a wheeled frame, which, when beaten by the son, caused a wooden figure to jiggle up and down to the (noisy) delight of the neighbourhood children.  They were fined five shillings.

Thomas continued to live in the house until his death in 1873, when he was buried in a common, or pauper’s, grave in Brompton Cemetery.

1See for instance London Physician (1869) The Nuisance of Street Music: a plea for the Sick, the Sensitive and the Studious; Smith, Charles Manby (1857) Curiosities of London Life; Bass, Michael T. (1864) Street Music in the Metropolis: correspondence and observations on the existing law and proposed amendments.

SOURCES
Other sources consulted were nineteenth century newspapers and census returns.  The text of a talk given by Dr Paul Simpson (2015) The History of Street Performance ‘Music by handle’ and the Silencing of Street Musicians gives an interesting overview of the street music problem.