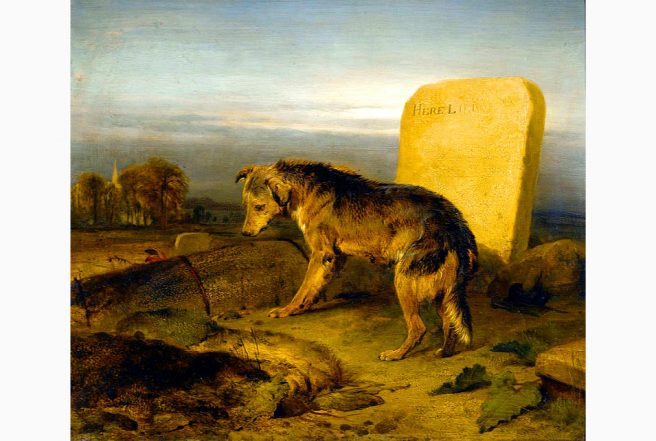 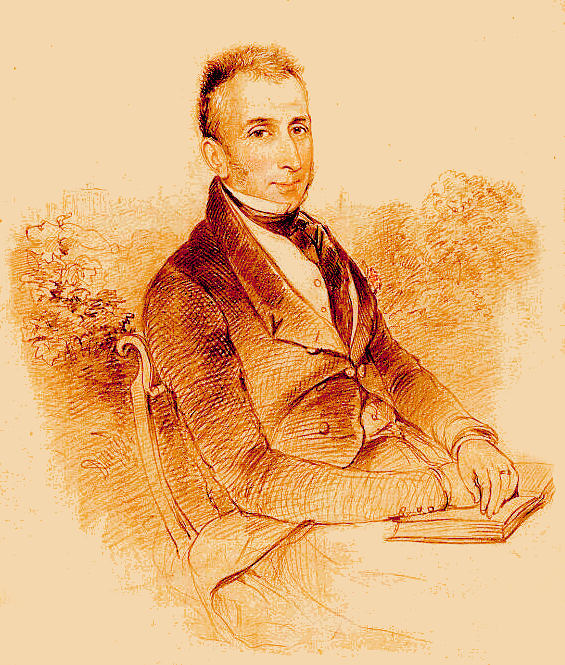 Readers of London Overlooked may find that Edward Jesse is a name that rings a bell.  Jesse was a man of many parts, and his varied career, which spanned the first half of the nineteenth century, embraced such diverse employments as government clerk, secretary to a president of the Board of Control, and commissioner of hackney coaches.  He also published books of natural history, and his literary activities enabled him to indulge a particular passion for dogs.  He collected anecdotes about dogs in the way one might collect stamps, or beer mats, and two of these delightful items have already provided material for articles on this website, which can be accessed here and here.

Well, we have a third Edward Jesse offering, and a charming—and rather poignant—little story it is too.  We will come to it in due course.  First, though, some background information, beginning with the fact that Jesse was drawn to the story because it has canine loyalty as its theme.  This, he suggests, is one way in which dogs come close to humans.  In fact he goes as far as to argue that this attachment is felt more deeply towards owners who are poor than those who are rich.  “Their fidelity appears greater,” he declares, “and more lasting.”

He goes on to explain that shared misery would seem to “tighten the cord of affection”, and, lest the reader doubt this, he quotes some fine lines from Walter Scott’s poem Helvellyn, in which the corpse of Charles Gough, a painter of the romantic school who dies after a fall in the Lake District, is guarded by Foxie, his small brown terrier:

Dark green was the spot ’mid the brown mountain heather,
Where the pilgrim of nature lay stretch’d in decay;
Like the corpse of an outcast abandon’d to weather,
’Till the mountain winds wasted the tenantless clay,

Nor yet quite deserted, tho’ lonely extended,
For faithful in death his mute fav’rite attended,
The much lov’d remains of his master defended,
And chas’d the hill fox and the raven away. 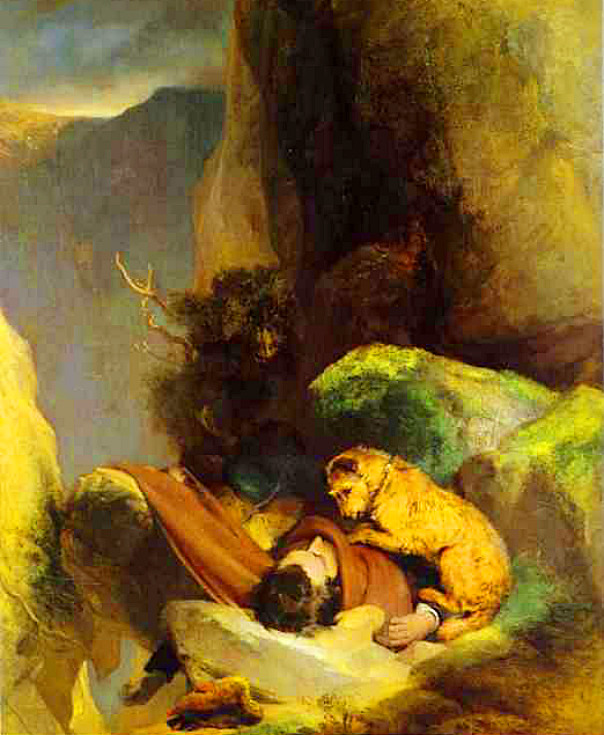 The combination of rugged landscape and noble sentiment inspired Edwin Landseer, who produced a remarkable painting in which the forlorn Foxie gazes tenderly at the motionless features of his beloved master.

AFFECTION AND LOYALTY
A second curious fact about Jesse’s story is that he lifted it, pretty well word for word, from another written source.  That source is a work by William Youatt, published in 1839, with the sonorous title The Obligation and Extent of Humanity to Brutes, Principally Considered with Reference to the Domesticated Animals.  Youatt is an interesting man.  He was a veterinary surgeon who not only excelled as a practitioner but also argued for important changes to the scope and structure of the profession.  He was a prolific writer, and, though not everyone agreed with his views on the management of animals, his general contribution to the development of the science did not go unnoticed.

Youatt’s personal life was less successful.  He had five daughters of disputed legitimacy, and towards the end of his life he suffered from depression, the cause of which may well have been financial embarrassment, and the result of which was certainly his suicide in 1847 at the age of seventy.  Apparently his lifeless body was found in his study by his eldest daughter, Mary Ann.  In his pocket was a small sum of money—one shilling and sixpence—and on a table by his side was a half-eaten bun sprinkled with prussic acid. 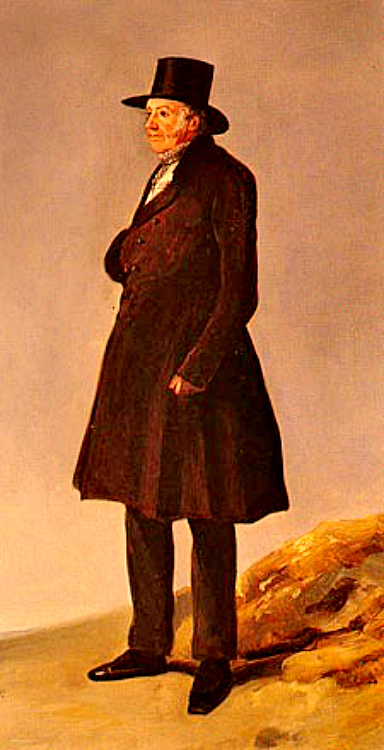 Youatt originally wrote the Obligation as an entry in an essay competition run for the benefit of the Society for the Prevention of Cruelty to Animals, and his sympathy with the aims of that enlightened organisation had a profound effect on his views.  His principal argument was that our dependence on animals does not in the slightest degree entitle us to treat them as mere machines.  Animals think and feel, just as we do.  They develop bonds with us—bonds of affection and loyalty—and nothing demonstrates this fact more powerfully than our relationship with dogs.

THEIR SINCERE ATTACHMENT
Interestingly, just as Jesse found his story in Youatt, so did Youatt himself find it in an earlier source, and that source was a book by a certain Joseph Taylor, which appeared in 1804 with the expansive title The General Character of the Dog: Illustrated by a Variety of Original and Interesting Anecdotes of that Beautiful and Useful Animal, in Prose and Verse.  Taylor the man is something of a mystery, and just about the only biographical fact we have about him is that he lived in Newington Butts in Southwark.  We know more about his work as an author, for he published a number of books with fascinating titles, though this is not the place to list them all.  Suffice it to say that his treatise on the canine character was followed by other animal publications, such as The Wonders of the Horse and Anecdotes of Remarkable Insects, whereas other topics were treated in such bizarre works as Apparitions; or, The Mystery of Ghosts, Hobgoblins, and Haunted Houses and The Danger of Premature Interment.

Taylor, like the two gentleman who followed him, was moved by the “sincere attachment” of dogs to humans, which he illustrated not only in the story I have long been promising to tell, but also in a rather sweet anecdote concerning a Mr Langford of Bolsover in Derbyshire, who, when death was approaching,

amongst other eccentric provisions in his will, left three shillings per week for the maintenance of a favourite little dog, with an express desire, that on the day of his interment it might be clothed with a sable mantle, and attend his remains as one of the chief mourners, which was accordingly done with the greatest pomp and solemnity. 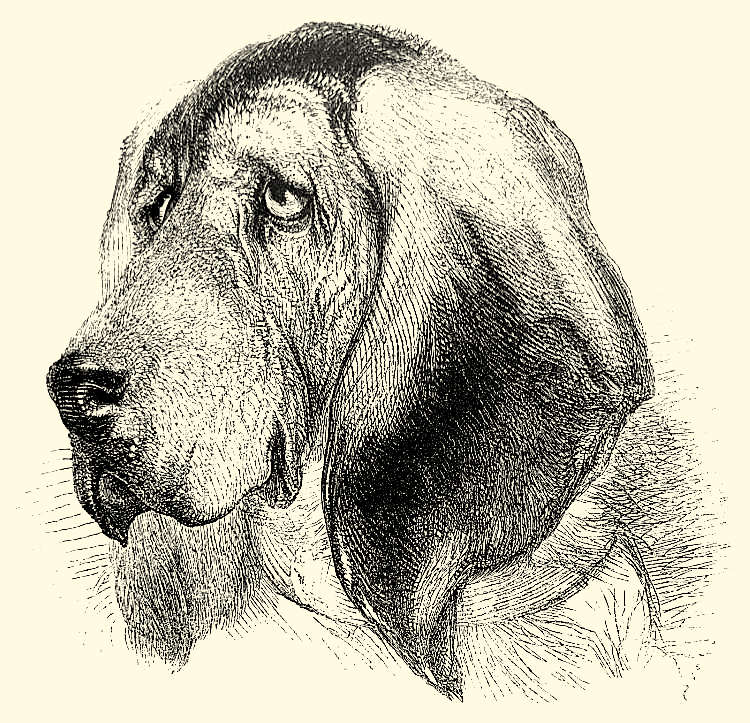 Portrait of a bloodhound by Abraham John Mason.  Image in William Youatt The Dog (1845) title page

THOSE SUBTERRANEAN RUINS
So let the main story begin!  The setting is the church of St Olave in Tooley Street in Southwark, and the cast of characters consists quite simply of a dog and its beloved master.  Sadly, the master does not have a name.  Actually, in Taylor’s original narrative, the dog has neither a name nor a breed, although Youatt thought it might have been a cur.  More often than not, of course, to call a dog a cur is simply to insult it, but Youatt knew better.  A cur, he pointed out, is a sheep-dog crossed with a terrier.

St Olave’s no longer stands, but at the time of the story, which in Taylor’s original form cannot have been later than 1804, it was a substantial building with a square tower and round and arched windows.  That, though, was a rebuilt version of its former self, for in 1736 it succumbed to the combined effects of subsidence and neglect, and suffered a partial collapse.  Even so, it was a handsome pile, and an image of the south side of Old London Bridge dated 1820 shows it dominating the skyline, rivalled only by a tower where small shot was manufactured by dropping molten lead from a great height into a cistern of water. 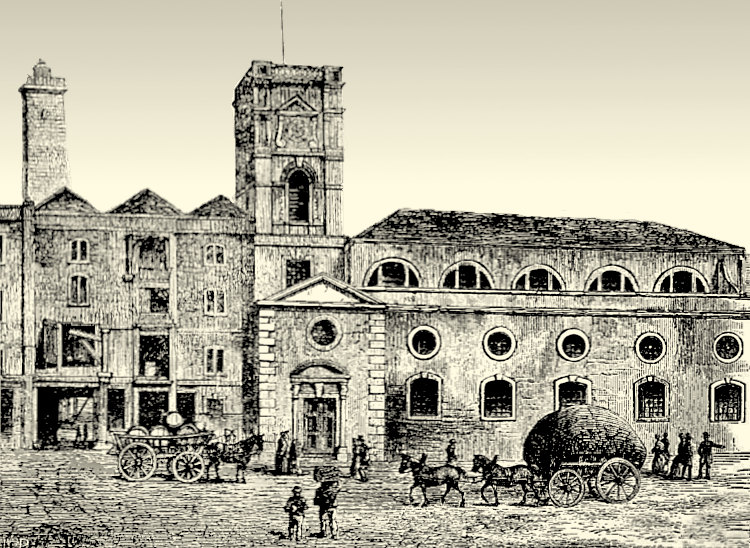 Now, the churchyard belonging to St Olave’s was as dilapidated as the building itself, so much so that a small hole had appeared that led down into the crypt.  The hole was hard of access, for it ran through rough stonework, but still large enough to admit a small and determined creature, such as a dog.  And there was a dog who did just that, worming his way through the gap in the stone and into the underground vault.  He was a mournful dog, for his beloved master had died, and in all the time that his master had lain dead he had been visiting those subterranean ruins, snuffling sadly through the dark until instinct told him that he had found the coffin wherein lay the object of his love.

THE SACRED DUST
At this point in his narrative Taylor penned a magnificent account of the heartbroken dog.  He shunned all contact with other dogs, avoided the company of humans, and only emerged from his gloomy cavern in the churchyard to satisfy a natural craving for food.  By this craving he was inevitably driven up into the daylight:

he, however, endures it no longer than just to eat the morsel sufficient to keep alive the lamp of life; which he probably takes, because he would not wish to shorten his sorrows over the sacred dust, of which he is now the generous sentinel. 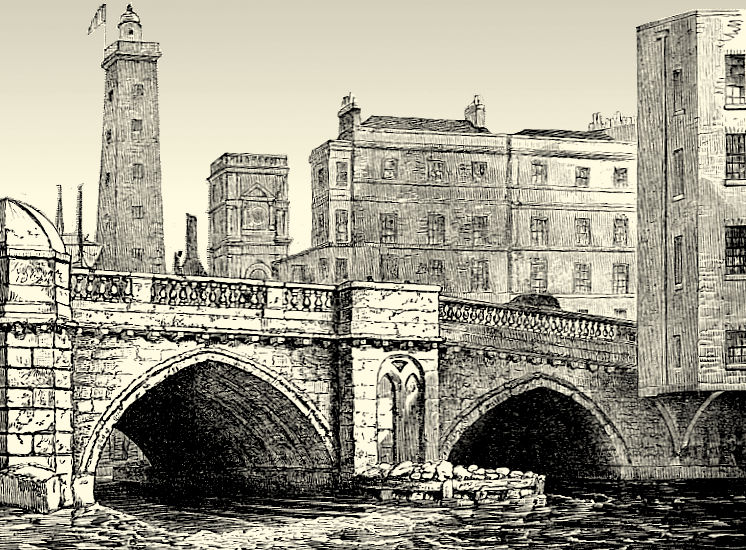 The south side of Old London Bridge, with the shot-tower and St Olave’s Church dominating the skyline.  Image in Edward Walford Old and New London volume 6 (1878) page 6.

But where did he get his food?  Neither Youatt nor Jesse could explain how the dog fed himself for the two or three months following the funeral of his master, on which sombre occasion he had made his first descent down into the vault, where there was no obvious source of sustenance.  However, in due course he attracted the attention of a gentleman who had his home opposite the churchyard.  The gentleman, having observed the dog making his lonely excursions down to his master’s Stygian abode, felt pity, and ordered his servant to put food out for the faithful mourner, which the servant did, frequently.

A BROKEN HEART
How did the unhappy dog respond to such kindness?  Although he did not always take what was on offer, he did on occasion, with a melancholy air that the gentleman would never forget.  And

as soon as he had finished his hasty meal, he would gaze for a moment on his benefactor.  It was an expressive look, but one which could not be misunderstood.  It conveyed all the thanks that a broken heart could give.

He would then return to his sepulchral cavern, joining again the company of the one whom he loved above all others.  Another three or four days would pass, and more food would be put out by the gentleman’s trusty servant.  And the dog might crawl out through the hole, with sunken eyes and dishevelled coat, to avail himself of what was on offer. 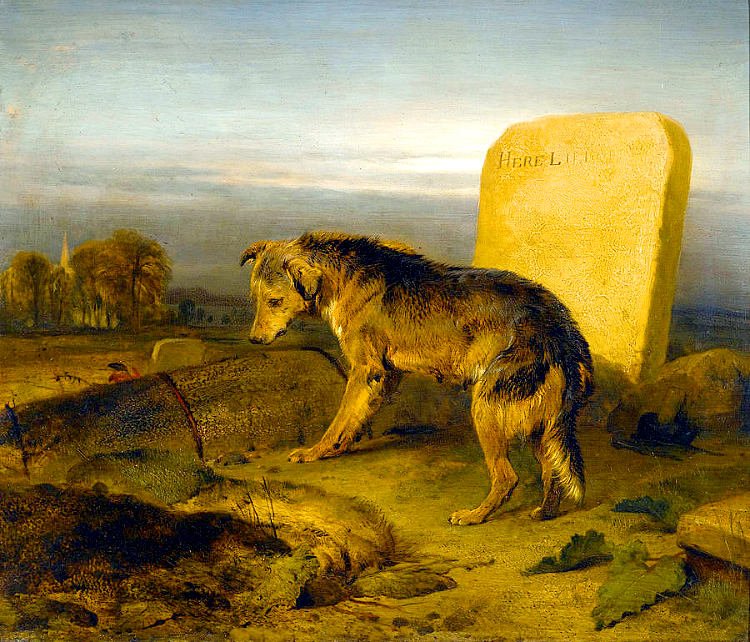 The Poor Dog, or, The Shepherd’s Grave.  With only a few changes this oil painting by Edwin Landseer would be the perfect illustration for the story of the churchyard cur.

For two years the dog remained faithful to his master in the manner described.  For two years he performed the same touching ritual, entombing himself for several days, emerging “lean and emaciated” to partake of a scanty meal, then entombing himself again.  But at the end of those two years he appeared no more, and was found lying dead at his master’s side, where he would lie devotedly and loyally for all time.