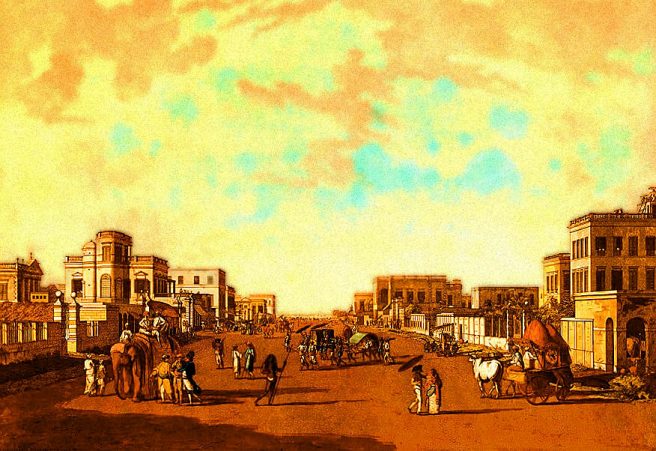 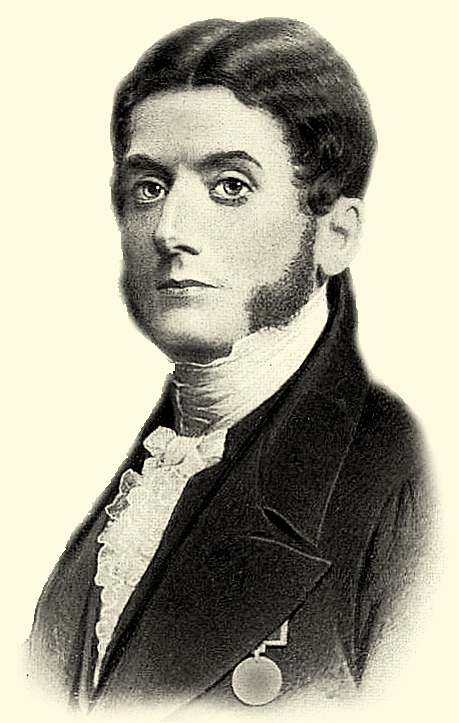 George Evelyn, veteran of Waterloo, from a miniature.  Image in Helen Evelyn The History of the Evelyn Family (1915) between pages 246 and 247.

On the 12th of July 1821 at the church of St Marylebone, just south of Regent’s Park, a George Evelyn married a Mary Jane Massy-Dawson.

Evelyn was a remarkable man.  He had fought at Waterloo, receiving a severe wound during the defence of the Château d’Hougoumont, when a shot fired through a hole in an old gate hit his left arm.  He had been born in Ireland, educated in England, and was now marrying the daughter of another Irish family.  The groom and his bride were cousins.  He was twenty-nine years old, and still suffered pain from his shattered arm.  She was twenty years old, and was small and pretty, with dark hair and blue eyes.

However, we are concerned not with the veteran of 1815 but with another George, who at the time was living barely four miles from Marylebone in the City of London, and who was his half-brother, and was a son of the same father, even though his name was not Evelyn but Nyleve.  George Nyleve.  He was cut from a very different cloth, and his story, which now follows, is certainly a strange one. 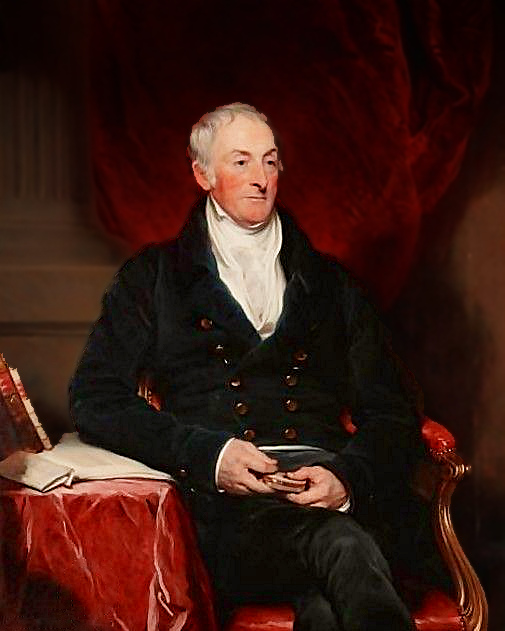 Portrait of John Evelyn of Wotton by Martin Archer Shee.

JOHN EVELYN
The father of the two Georges was John Evelyn, a namesake and cousin several times removed of the seventeenth-century diarist.  Starting in 1770 at the age of twenty-seven he worked for twenty years for the Honourable East India Company, holding various offices in what were then Calcutta and Dacca but are now Kolkata and Dhaka respectively.

At first glance Evelyn’s life in India was conventional enough.  He was introduced to a young Irish girl by the name of Anne Shee, who had been sent out to Dacca to find a suitable husband, and he married her, aged sixteen, in 1787.  Three years later the Evelyns sold their horses and carriages and left Bengal for England.  By this time they had two children, and another two were born after their return, of whom the elder was the George who would one day distinguish himself fighting in Wellington’s army.  But whereas Anne Evelyn née Shee was a mother of four, John Evelyn was a father of five.  For he also had an illegitimate child—a son—whose arrival in the world requires a word or two of explanation. 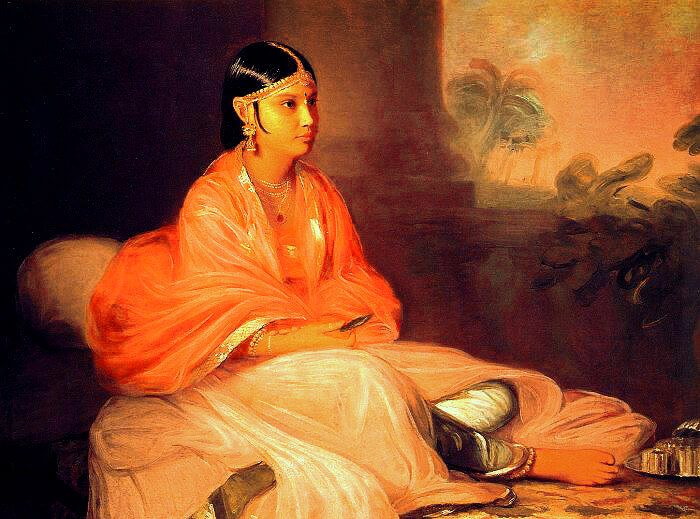 THE TWO GEORGES
In a way, the fact that Evelyn had an illegitimate son should not surprise us, given that Company men in Calcutta freely consorted with Bengali women.  Thomas Williamson’s East India Vade-Mecum, published in 1810 as a “complete guide to gentlemen” heading out from Europe, openly discusses the business of “concubinage in the East”.  Williamson reckoned that keeping a mistress drawn from the local population would set his reader back only about forty rupees a month—equivalent to sixty pounds sterling a year—an outlay that “must certainly be considered no great price for a bosom friend, when compared with the sums laid out upon some British damsels”.  However, the identity of Evelyn’s mistress remains a mystery.  Family tradition has it that she was the daughter of a similar European-Bengali partnership.  But beyond that nothing of her survives.  No name, no age.  She has been written out of history.

The boy was born in about 1785, that is to say two years before Evelyn’s marriage to Anne Shee.  He was called George, which was the name that the Evelyns would give their third son when he was born in 1791 in Galway.  However, there was never any confusion between the two Georges, because in spite of having the same father they had different surnames.  The legitimate George was naturally an Evelyn.  But his illegitimate half-brother was the Nyleve referred to earlier.

The Esplanade at Sidmouth in Regency times.  Engraving by Kershaw & Son.

We do not know with any degree of certainty why Evelyn gave his first-born son this odd pseudonym, which is, incidentally, nothing more than “Evelyn” written backwards.  Probably he was anxious to keep his liaison secret, in which he was certainly successful, as no record of a baptism has come to light.  At the same time he did not simply abandon the boy, who came back with him—or at least was sent back by him—from Calcutta.  And years later, in 1827, he would make provision in his will for his “natural”—illegitimate—“son George Nyleve”, leaving him the freehold on a property in Sidmouth in Devon called Cannister House, a brick-built pile complete with a stable, a coach-house and a cottage.  When Nyleve died, the property was auctioned off as The Marine Hotel, an enterprise that had been managed for many years by a man called Daniel Pearcy.  There is no evidence that he ever actually lived there himself.

NYLEVE IN LONDON
Nyleve first appears in the records living and working in Wood Street, which runs north from Cheapside in the City of London.  In 1797, when he was still a boy, he had been apprenticed to a joiner by the name of Thomas Smith, and the indenture, which survives, surprisingly identifies him as the son not of John Evelyn but of John Nyleve.  Even more surprisingly, this John Nyleve was a “gentleman deceased”!  We must assume that Evelyn, who was very much alive, wanted to distance himself from his Calcutta family to avoid complications in his new life in Ireland and England. 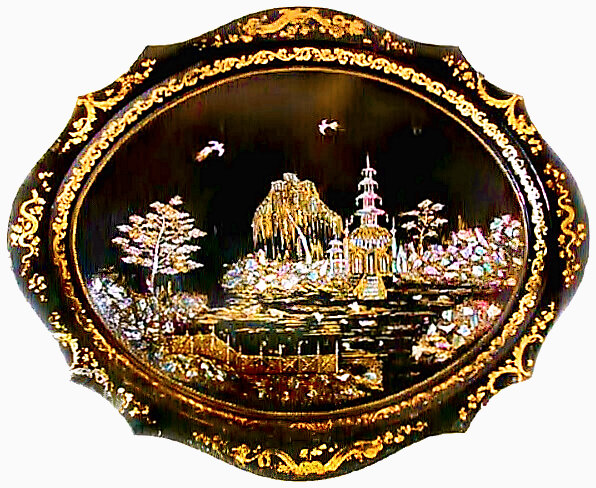 An example of japanning, not by George Nyleve, sadly, but by George Wallis.  Dated 1850.

Nyleve entered into a partnership with Smith as japanners, and, although the joint enterprise eventually folded in 1806, he continued in this line of work for some time.  In 1811 he was listed in the London and Country Directory as an “ornamental, transparent and decorative painter”.  A Sun Fire Office policy dating from 1815 shows that he entered into a second partnership, this time with a William Roberts.  He would remain in his Wood Street premises until at least 1825, and during this time he married twice—his first wife, Keziah, died in 1823—and fathered five daughters.

By the year 1829 he had moved from the City to Charing Cross, and it was there that his second wife, Elizabeth, bore him his sixth daughter.  However, at the time of the 1841 census he was living not with Elizabeth but with a woman by the name of Matilda Gatrill.  His married life was evidently no more straightforward than his father’s had been.

Matilda must have meant a great deal to him, for in his will, which he drew up in 1840, he left her a third of his freehold and leasehold property and a half of his goods and chattels.  To Elizabeth, on the other hand, he left five shillings.  But all that we know about Matilda is that she was the daughter of a carpenter from Hampshire, and that she married a labourer, John Stratton, on Christmas Day in 1843, the year of George’s death.  Stratton was more than twenty years her senior, and had once served in the 66th Regiment of Foot.  She was a spinster, according to the marriage certificate—her relationship with George had never been formalised.

The Royal Menagerie at Exeter ‘Change in the Strand.  The exotic painted backdrop is clearly visible above the cages ranged along the right-hand wall of the apartment.  Illustration in Rudolph Ackermann The Repository of Arts volume 8 (1812).

THE SURREY ZOOLOGICAL GARDENS
Another name of great significance in Nyleve’s will is that of Edward Cross, the owner of the menagerie at Exeter Change in the Strand.  Nyleve left no money to Cross, but there must have been a close connection, as he appointed him his executor alongside his executrix, who was almost inevitably Matilda Gatrill.  Quite how Nyleve and Cross were connected is a bit of a mystery.  In Cross’s ledger of expenses there is reference to a shawl that Nyleve, for some unspecified reason, had cleaned and repaired for him.  Beyond this we can only guess.  A delightful possibility is that Nyleve had painted the exuberant scenery—a distant memory of the Bengal of his early childhood—that gave Cross’s caged animals a suitably exotic backdrop.

Nyleve died of chronic bowel disease at the age of 58.  At the time of his death he was living in Amelia Street in Walworth, only doors away from Edward Cross, who had long ago left the Strand to found the Surrey Zoological Gardens.  There may be nothing in it, of course, but it is at least possible that Nyleve worked for Cross at the Gardens in some capacity, maybe again as an artist painting the backdrops to the “entertainments” that were so popular with the public.  So many unanswered questions! 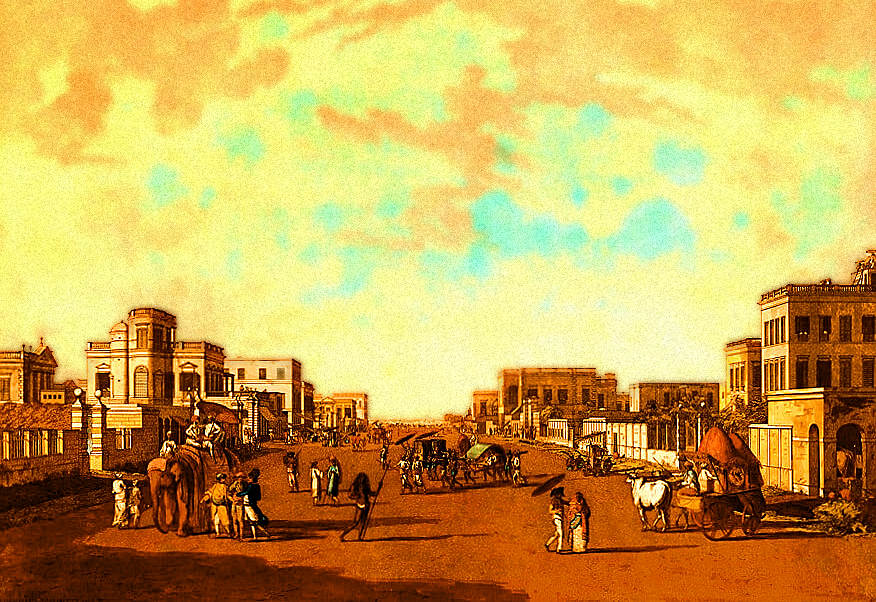 A street in Calcutta in 1788.  Print by Thomas Daniell.

But in a way these only add to the aura of mystery that already surrounds George Nyleve.  He was indeed something of an enigma.  He had one foot in the East, the other in the West.  His name was almost but not quite that of his father.  He had an Anglo-Indian mother, of whom no record survives.  He lived most of his life in London, and yet he never entirely forgot his native Bengal.  After all he knew—or thought he knew!—how to deal with elephants when they got out of hand.