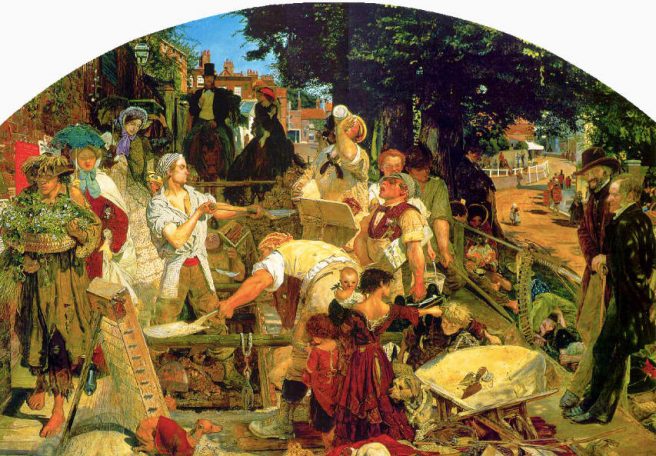 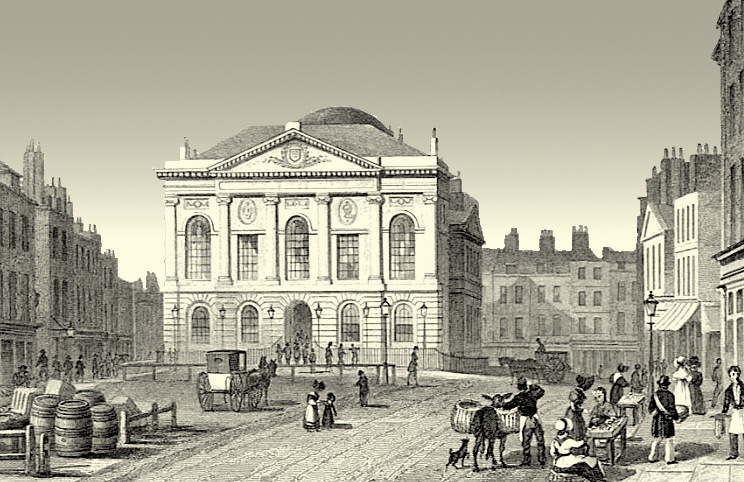 View of the Middlesex Sessions House on Clerkenwell Green.  Image by Thomas Hosmer Shepherd in London and its Environs in the Nineteenth Century (1829) plate 112.

Monday the 17th of January 1848 was a busy day at the sessions house on Clerkenwell Green.  The sessions house was, and would be for the best part of the nineteenth century, the principal judicial centre for the county of Middlesex.  In this imposing classical edifice, with its Ionic columns and pilasters, its ornate pediment and its rusticated basement, the quarter sessions were held.  One might have thought that there would be four quarter sessions, but crime in the county of Middlesex was rife, and the justices of the peace were required to sit in judgement on many more occasions than this modest figure might suggest.

WORLDS APART
The cases on that Monday were heard by a bench of magistrates chaired by Francis Pearson Walesby.  He was about fifty years of age, and a man of many parts.  He was educated at Oxford, where he studied both Classics and Law.  He maintained his links with the university throughout his life, serving as Rawlinsonian Professor of Anglo-Saxon in his thirties, and as an examiner in Law and Modern History in 1857, which was the year before his death.  He edited a reprint of Boswell’s Life of Samuel Johnson, and, on a very different tack, contributed memoirs of distinguished sheep breeders to Baxter’s Library of Practical Agriculture.  But alongside this varied scholarly activity he was pursuing a legal career, and in 1826, when he was in his late twenties, he began practising as a barrister at Gray’s Inn. 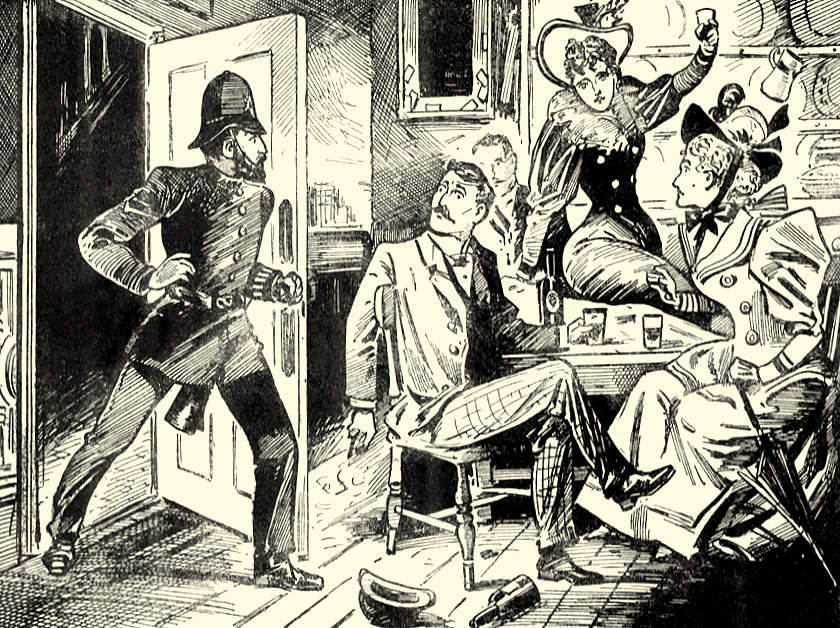 Police raid on a “disorderly house” near the Strand.  Image in The Illustrated Police News 24 October 1896.

How strikingly different were the educational attainments of the ninety odd prisoners who came before Walesby and his bench of magistrates!  In the criminal register of the Middlesex sessions it was recorded that only two of those unhappy individuals could read and write well.  Fifteen others could read but not write.  A further thirty-nine could do one or both up to a point, and the final thirty-eight were completely unable to do either.  The charges brought against them were mostly related to theft, but there were also cases of fraud and assault, and a Harriet Wilson, who was twenty-three and well educated, was accused of “keeping a disorderly house”.  Some of the prisoners were found not guilty—Harriet Wilson for one—but most were given custodial sentences ranging from one month in prison to transportation for ten years.

ENTER THE NAVVIES
The story I am about to tell is concerned with six particular prisoners, all of whom were men.  Five of the six were in their twenties.  The sixth was only eighteen.  They were all navvies, they were all out of work, and they were all facing the magistrates on the same charge, which was theft. 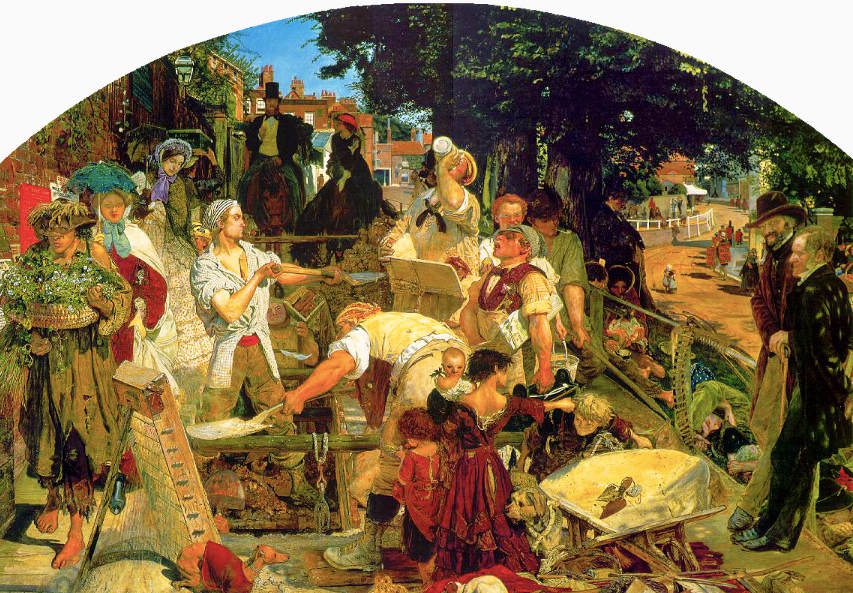 The navvy was one of the most mythologised members of the Victorian labouring classes.  He derived his name from the digging of the “navigations”, that is to say the canals, although as the nineteenth century wore on he was more likely to be employed in the building of railways, or, as in the case of the men depicted by Ford Madox Brown in his majestic Work, in the excavating of sewers.  His work was heavy, and, where recourse was had to explosives, dangerous.  His place in the social hierarchy was low, and, given that he moved from one area to another in pursuit of employment, his accommodation was likely to be makeshift, squalid and mean.

EXPERTS IN THEIR FIELD
An important element of the mythology was the enormous value of the navvy’s hard-won experience.  The reformist campaigner Samuel Smiles praised the men who toiled on Robert Stephenson’s London and Birmingham Railway for

their expertness in all sorts of earthwork, in embanking, boring and well-sinking—their practical knowledge of the nature of soils and rocks, the tenacity of clays, and the porosity of certain stratifications—were very great; and, rough-looking though they were, many of them were as important in their own department as the contractor or the engineer. 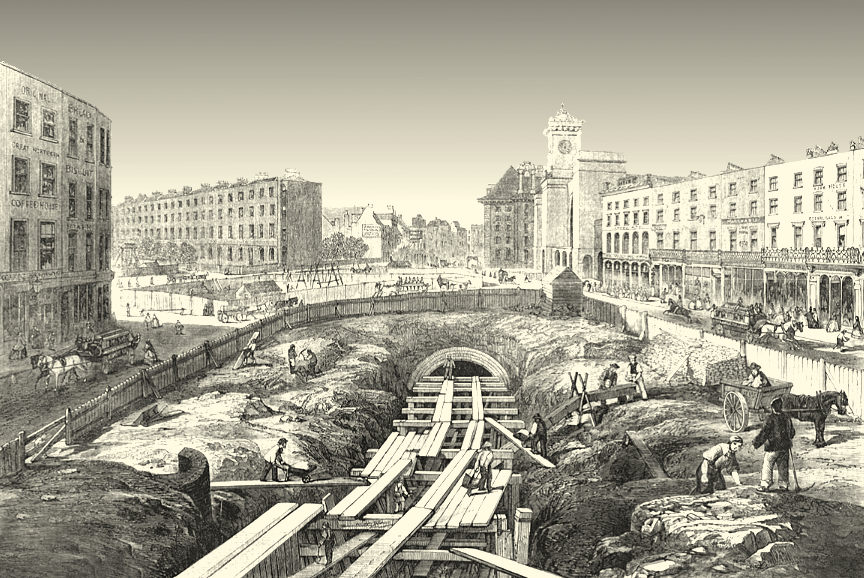 Navvies working on the Metropolitan Railway at King’s Cross.  Image in The Illustrated London News 2 February 1861.

The navvy wore what was almost a uniform consisting of

a white felt hat with the brim turned up, a velveteen or jean square-tailed coat, a scarlet plush waistcoat with little black spots, and a bright-coloured kerchief round his herculean neck, when, as often happened, it was not left entirely bare.  His corduroy breeches were retained in position by a leathern strap round the waist, and were tied and buttoned at the knee, displaying beneath a solid calf and foot encased in strong high-laced boots.

He displayed remarkable powers of endurance, working, if necessary, for twelve hours or more with only short breaks for meals.  He disregarded danger, and even courted it, regarding injury as a badge of honour.

However, as Smiles pointed out, the railway navvies lived as hard as they worked.  Relegated to the fringes of society, and unsoftened by its manners and morals, they spent their leisure time in wild and unrestrained behaviour.  They drank heavily, and alienated the inhabitants of the villages along the route of the new railway works.  Smiles thought that they were in general good at heart—“frank and open-handed with their comrades” and “ready to share their last penny with those in distress”—but brutalised by the conditions in which they were forced to toil.

THE STREETS OF MARYLEBONE
But to return to the story of the six London navvies who found themselves facing Francis Pearson Walesby and his fellow magistrates on that Monday morning in January 1848.  On the evening of the previous Thursday two of the men, John Poole and John Smith, made an unexpected appearance in the shop of a Mr Charles Butler in Marylebone Lane.

On a map of the time we are talking about—say Cross’s 1844 or 1851 London Guide—we see the Lane snaking down from Marylebone High Street towards Oxford Street.  The area has strong associations with Charles Dickens, who was then living at the New Road end of the High Street in Devonshire Terrace, where he kept pet ravens.  His father, the feckless John Dickens, had been born in Marylebone, as had Wilkie Collins, his fellow writer and close friend.  In January 1848 he was bringing out chapters 49 to 51 of Dombey and Son.  The final instalment would appear in April, the same month in which Frédéric Chopin, visiting London for a concert tour, stayed briefly at the corner with Bentinck Street.  The accommodation had been arranged by the composer’s devoted friend Jane Stirling, but it did not suit him, and within days he had moved to Dover Street, off Piccadilly.

A SURPRISE VISIT
Also nearby was the workhouse in Northumberland Street, and the navvies, who were unemployed, would later claim that they had been hoping to be admitted into the casual ward.  But in this they had failed, and all the while they were walking down along Marylebone Lane, the sights, and indeed the smells, must have tormented them.  They were all but penniless, and very hungry, and yet everywhere they looked they found one sort of food shop or another.  There were shops selling fruit, meat, fish—even muffins.  There was a wine merchant and a beer retailer.  There were several coffee rooms, of which one, run by Mr Edward Gouldbrough, was at no. 63, and therefore next door to Charles Butler.

And it was in the bakery at no. 64 that the whole business began with an unpleasant surprise for Mr Butler.  For he saw the door of his shop open, and two men enter.  They were both young, both powerfully built, and both dressed in coarse clothes.  They were the two navvies—John Poole and John Smith—and their terrible hunger had driven them to a reckless and desperate course of action … TO BE CONCLUDED