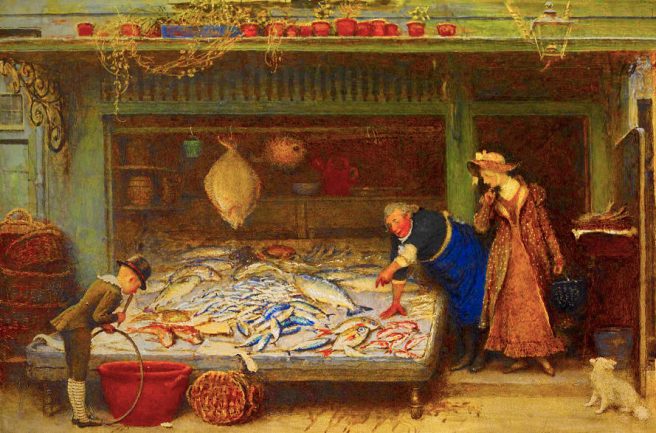 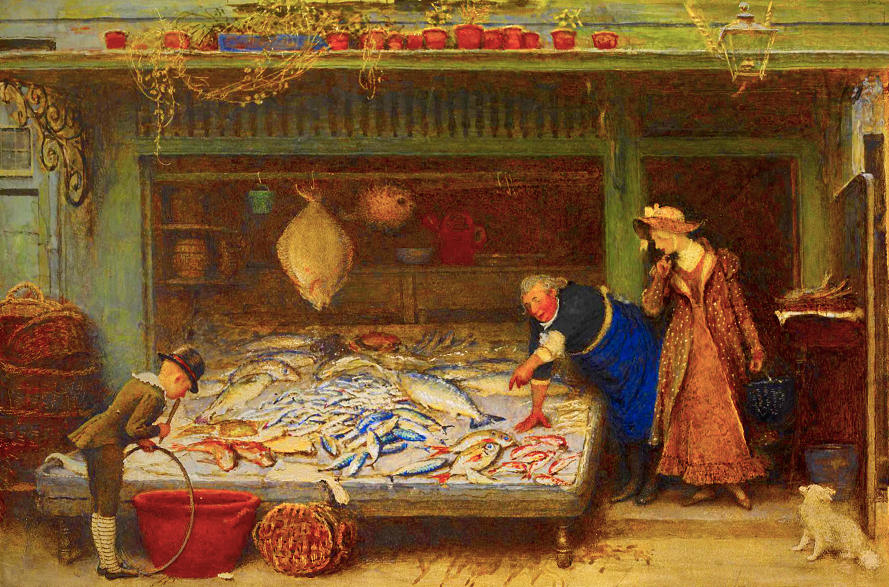 If you look in the London directories for the early twentieth century, you will come across a fellow by the name of J C Moore.  He was a fishmonger, and he lived in South London, dying in 1935 at the age of fifty.  He lies buried in Streatham Cemetery—in the same resting place as Henry Budden of Lambeth, about whom we wrote recently—and with a bit of persistence you can find his grave.

I should point out that Streatham is not one of the grand London cemeteries—it is not one of the “Magnificent Seven”—and its atmosphere is more melancholy than romantic.  But it still has many a good story waiting to be told, and Mr Moore’s is no exception.  So here is his story, or, to be precise, the story of his name.  For our fishmonger was not John Charles Moore, nor was he James Claude Moore, nor was he even Joseph Clarence Moore.  No.  He was, surprisingly, Julius Caesar Moore.

FAMILY FISHMONGERS
When I said just now that Julius Caesar Moore was a fishmonger, what I really meant was that he was one of a family of fishmongers.  His father was a fishmonger, and so was his brother.  And the wider Moore family, along with the families they married into, namely the Wood family and the Dove family, boasted at least four further fishmongers.  All of which adds up to a virtual dynasty of fishmongers, making the name Julius Caesar—a dynastic name if ever there was one—somehow pretty apt. 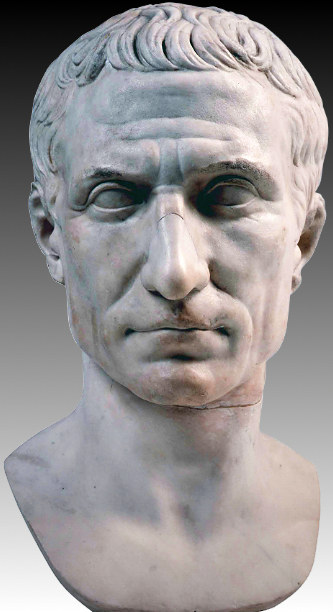 Portrait bust of the real Julius Caesar in the Vatican Museum.

Another odd fact is that Julius Caesar Moore’s fishmonger father was called Octavius Robert Moore.  The oddity lies in the relationship between the real Julius Caesar and the real Octavius, and by real, of course, I mean Roman.  Octavius—better known as Octavian, and even better known as Augustus, the first Roman emperor—was the great-nephew of Julius Caesar.  In due course he was even adopted by Julius Caesar as his legal son.  So the names are connected, at least historically, in the most intricate fashion.

What is more, the entire family was littered with these classical references.  Julius Caesar’s fishmonger brother, who was five years his senior, was Octavius Frederick Arthur Moore.  Their grandmother—Octavius Robert’s mother—was a Julia Caesar.  And Julia Caesar’s father—who was not a fishmonger but a coachmaker—was an Octavius Caesar.  History, as they say, repeats itself.

A FINE KETTLE
Octavius Robert Moore may have been a good fishmonger, but he was not exactly a paragon of virtue.  In 1888, for example, he was fined one pound ten shillings for three short measures.  One suspects that this was an occupational hazard—he was one of thirty-nine men and women summonsed under the Weights and Measures Act in that single session—and no doubt the canny shopkeeper shrugged it off.  Certainly it did not compare with the scrape he got into when he was only fourteen.  That episode, we might say, was a very different kettle of fish.

The story goes like this.  One Wednesday in 1867—March the 27th to be precise—young Octavius was loitering in Lambeth Walk, a road which ran roughly from the Bethlem Hospital down to the union workhouse.  (The “Lambeth Walk” dance, which does indeed take its name from this colourful street, has its own fascinating history.)  With him was an associate, George Lloyd, also fourteen years old.  The casual observer might have said that they were taking an unusual interest in the premises of Mr Richard Hall, oil and colourman, at no. 154. 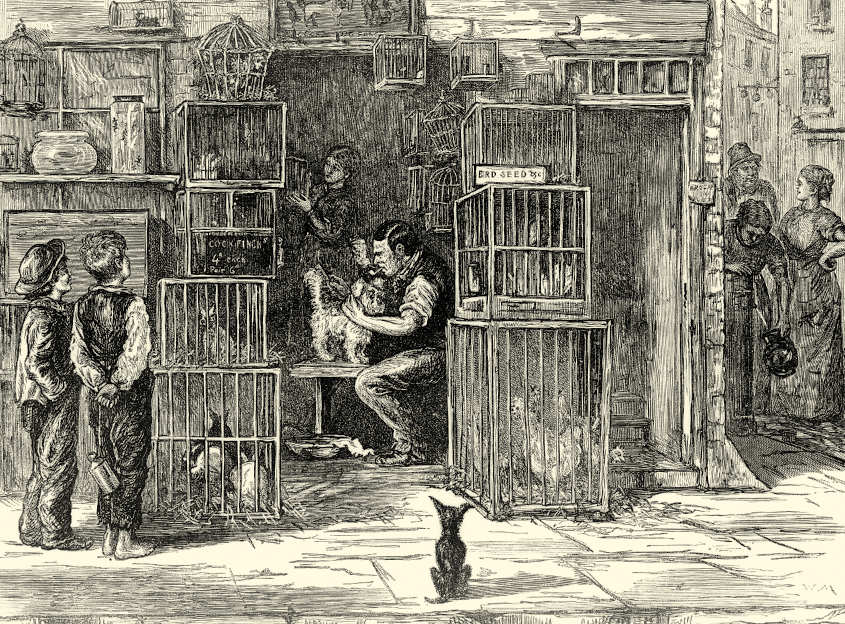 What exactly was an oil and colourman in the world of Victorian trades?  Originally he was simply a supplier of paint.  But over time his retail scope widened considerably to include household goods, kitchen condiments, chemicals, ironmongery and hardware.  A trade card for a retailer in Bishopsgate Street in the City of London shows among other things bottles of oil, a jar of pickles, and, most significantly, brushes.

The brushes are significant because it was brushes that young Octavius and George had their eye on.  They were hanging from the door posts of Mr Hall’s shop, which, being at the corner of Lambeth Walk and King Street, was well-placed for a quick getaway.  Such was the opportunity.  The motive was, obviously, theft.  A stick with a hook fixed to the end provided the means, and in this way the thieves were able to nick eight of Mr Hall’s brushes. 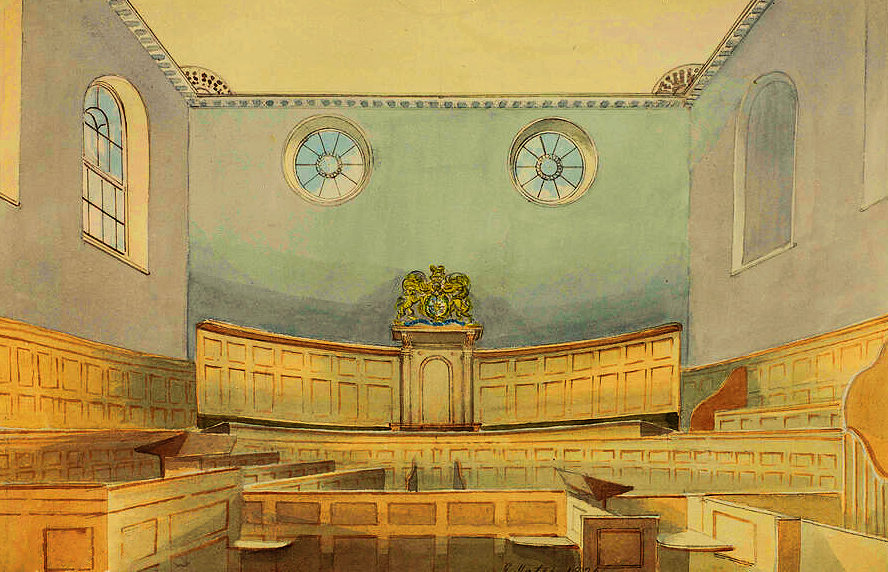 Interior of the Sessions House in Newington Causeway in c.1825.  © London Picture Archive

(The astute reader will at this point spot the irony that Octavius, the future fishmonger, was using a method not unrelated to the fisherman’s.)

Had Mr Hall noticed what had happened, he would have given chase.  He was still in his early thirties, which is a good age for running after teenaged thieves.  But he had not noticed, and it was left to a bobby on his beat to extend the long arm of the law.  Presumably the latter’s suspicions were roused by the sight of two boys carrying eight brushes—and a stick with a hook—and he had some searching questions to put to them.  Approached by the bobby, Octavius and George dropped the brushes and scarpered, but they were overhauled, and in due course came up before the Surrey magistrate, Thomas Tilson, at the Sessions House in Newington Causeway.  Given that he was also chairman of the board of the British Orphan Asylum, Tilson was singularly unsympathetic, and he sentenced Octavius to a month’s hard labour in the County House of Correction at Wandsworth, followed by four years in a reformatory.  George, who one supposes was just an accomplice, got off lightly, kicking his heels for a day in the gaol at Horsemonger Lane. 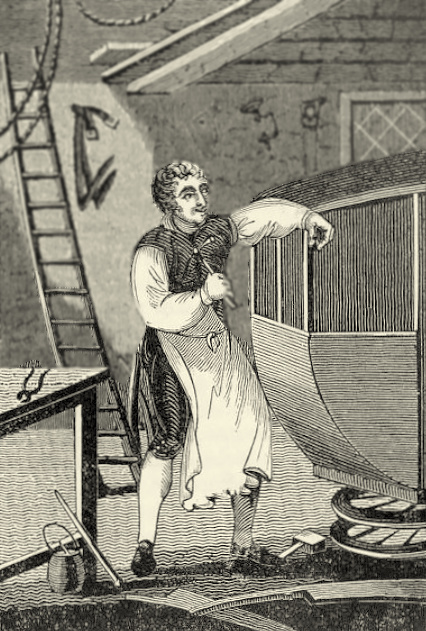 GRANDFATHER OCTAVIUS
But in order to explain fully how our fishmongers came to be called Octavius and Julius Caesar, we need to go back even further into the history of the family.  And as we have seen already, the names descended to Octavius through his mother’s line.  He was a Moore thanks to his father, Robert Allen Moore, a goldbeater who, like the Lambeth Walk, may well deserve a story of his own.  But the more interesting bit of his name went back to the coachmaker Octavius Caesar, father of his mother Julia Caesar.

The coachmakers were masters of more than one craft.  Some were concerned with the body of the vehicle, where the passengers sat, others with the carriage proper, which was the underlying framework.  The former were better paid, being responsible for the panelling and upholstery.  Then there were the trimmers, the body painters, the carriage painters, the smiths—all paid in proportion to the fineness of their work.  The most highly paid, though, were the herald painters, whose joy it was to emblazon a vehicle with its owner’s coat of arms.

Octavius Caesar, born probably in 1796, has really kept himself to himself.  We know that he married an Ann Ryland in 1814, and that he died in 1864.  He certainly had three children—as well as Julia Caesar a Julius Caesar and an Octavia Augusta Caesar—and he may have had more.  We also know that he was a coachmaker from start to finish, although just how successful he was is a mystery.  But the single most significant fact about Octavius is that he was a foundling.

Bird’s-eye view of the courtyard of the Foundling Hospital.  Coloured engraving after Louis Peter Boitard dated 1753.

PROUD IDENTITIES
The Foundling Hospital, which had been established by the philanthropist Thomas Coram in 1739, and first opened its doors in 1741, originally stood in Hatton Garden in Holborn.  But by the time the boy who became Octavius Caesar was admitted it had moved to Bloomsbury, where, in what is now Brunswick Square, it was surrounded by fields.  In common with all the little inmates of the Hospital, Octavius Caesar would have been given his name on arrival.  He was the real-life counterpart of Oliver Twist, named by the workhouse beadle, Mr Bumble, who in his naming of children had reached “T” in the alphabet.

In a history written in 1858 John Brownlow, the Secretary of the Hospital, and himself a foundling, gave an account of this remarkable practice.  In the early days names were taken from those who had in some way supported the establishment, but as time went by they were drawn from deeper wells.  Ridley and Latimer, Chaucer and Shakespeare, Drake and Cromwell and many, many other great figures of the past, and indeed of the present, gave dignity and self-esteem to these abandoned creatures.  A boy might be a Tom Jones or a Baltic Nelson, a girl a Jane Hogarth or an Emma Hamilton.

What is notable in the case of Octavius Caesar is the persistence with which his name, and names historically related to it, passed down through the generations of his family.  As we have seen, almost a century later his descendants Octavius Robert Moore and Julius Caesar Moore were still bearing witness to his proud identity.  And they did so whenever they signed a letter, or wrote a receipt, or opened their mouths to introduce themselves.  What’s in a name?  Well, in this case, a very great deal.