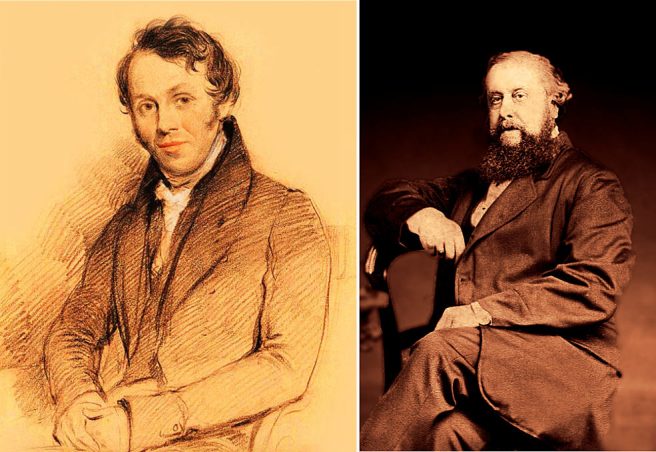 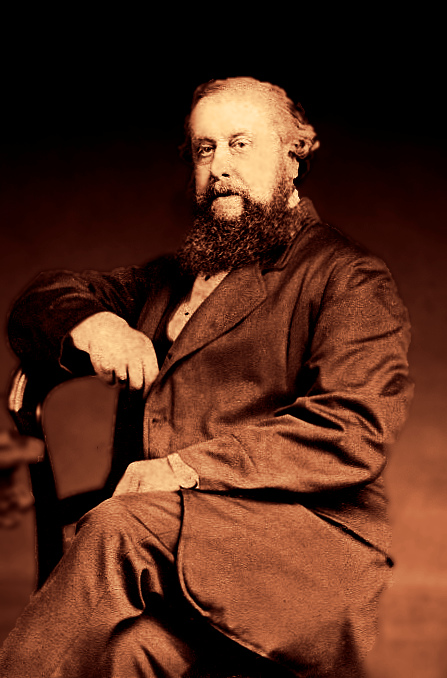 This is the story of William Henry Monk.  He was a professor of music, and, if perhaps his name is not familiar to you, a melody he composed in a moment of inspiration most certainly will be.  But it is also the story of his daughter Florence—full name Florence Emily Caroline Monk—who unwittingly provided that inspiration.  But you are warned that what you are about to read is very, very sad.

A FINE STONE BRIDGE
William Henry Monk, the son of William and Anna, was born in 1823 in Chelsea, and baptised in St George’s Church in Hanover Square.  His father was a tallow chandler, but he himself was a musical child, and, after studying under a succession of experienced teachers, he received his first appointment as church organist at St Peter’s in Eaton Square while still in his teens.  From there he worked at St George’s in Albermarle Street and St Paul’s in Portman Square, and at the age of twenty-three he married Hope Isidora Pillow, the daughter of a master lighterman.

In the summer of 1849 Florence was born.  At the time the Monks were living in Lambeth at 113 Upper Stamford Street, a house built by the family of the novelist John Galsworthy, and they had their daughter baptised in the fine Greek Revival church of St John the Evangelist in Waterloo.  In the same year William took up the post of organist at King’s College in the Strand, having already served as choirmaster for the previous two years.

King’s College in 1831.  William Henry Monk worked there from 1847.  Engraving by James Carter.

William’s journey to the college took him along Upper Stamford Street, and across Waterloo Bridge.  “Waterloo Bridge,” wrote George Henry Birch towards the end of the century in his Descriptive Album of London, “is considered the finest stone bridge in the world.”  The view of the river, and of Somerset House on the north embankment, would have been a constant joy.

Had William ever crossed Waterloo Bridge Road, and ventured down into south Lambeth, the scenes he encountered would have been very different.  Not much later, in the 1860s, the photographer William Strudwick would be at work in this desolate area of the Victorian capital, recording a postapocalyptic landscape of grimy cobbled streets and derelict houses.  In some of these images we see people staring at the camera—and at us—like ghosts from the distant past.  They went long ago.  Forgotten Londoners.  Overlooked Londoners. 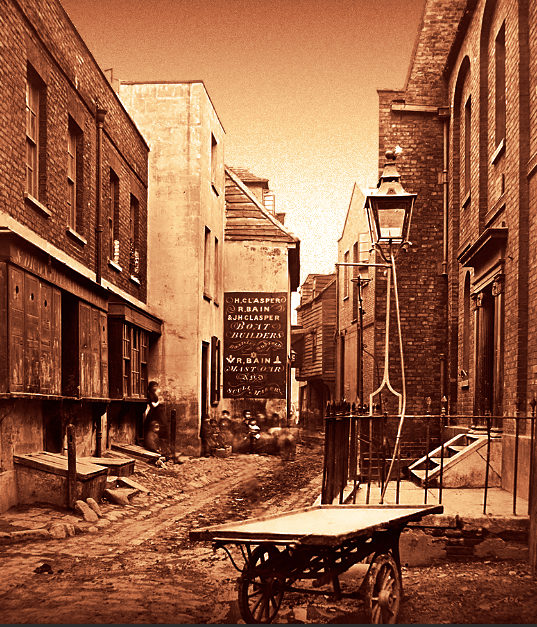 Fore Street in Lambeth, photographed in about 1865 by William Strudwick.  Ghostly figures can just be made out beneath the billboard.  Two more appear further to the left in the corner of the light and the dark building.  © Victoria and Albert Museum

WITH THE RAILWAY CLOSE BY
But William, Hope and Florence Monk did not remain south of the river for long, and at some point in 1851 or 1852 they moved up to Islington.  At the time of the move William was working at the School for the Indigent Blind in Southwark, where music occupied an important part of a curriculum that was otherwise directed towards more obviously practical skills.  Subsequently he was appointed organist at the newly-built Gothic Revival church of St Matthias in Stoke Newington, where he took charge of the choir, which operated on a voluntary basis. 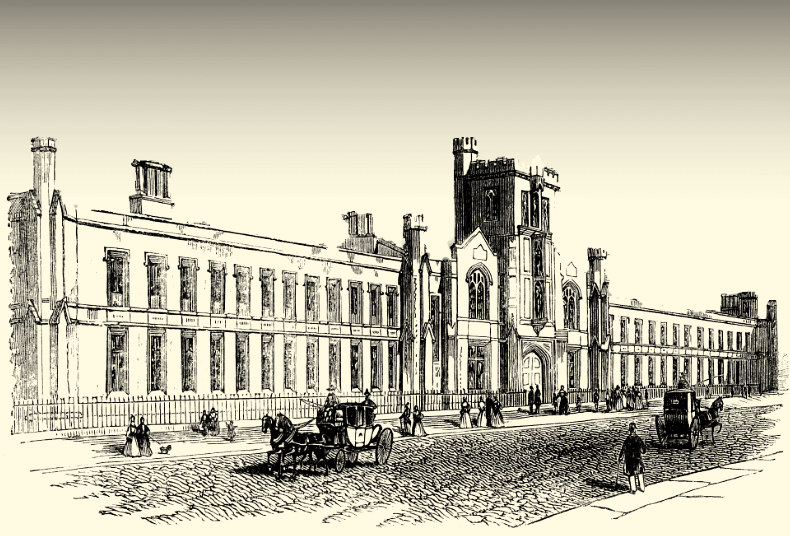 The School for the Indigent Blind in Southwark.  Image in The Illustrated London News 27 May 1843.

The Monks lived not far from the church in St Paul’s Road in Islington.  Their home was Gresham Cottage, a stone’s throw from the London & Birmingham Railway, which swung north from its terminus at Euston Station, and west on its way towards the tunnel—the first railway tunnel in London—that plunged through Primrose Hill.  Florence was then about two years old, and one can easily imagine her surprise, and maybe even her delight, every time an engine and its carriages clattered past. 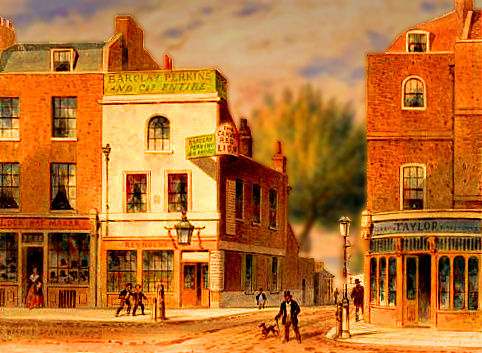 And it was in Gresham Cottage, on a foggy Wednesday in April 1852, that little Florence died.  She had been suffering for the best part of a year from a ramollissement—a softening—of her brain.  One can hardly bear to think of her steady and relentless decline, nor indeed of the long and cruel anguish inflicted on her young parents.  Death, when it came, was brought on by a stroke.  At the very end William was at Florence’s bedside—he is the informant on her death certificate—and we have no reason to suppose that Hope was not there as well.

A PHOENIX AT EVENTIDE
Before long there were other children.  The youngest, born in 1863, was called Florence—Florence Hopestill Monk—to keep alive the memory of the sister she had never known.  In name, at least, she seemed to have risen again, phoenix-like, from a fire that had never quite gone out.

But it was not only the name that survived little Florence’s death.  For shortly after the tragedy something remarkable happened, the details of which were preserved in a letter written by Hope in 1891.  She recalled quite clearly that she and William had been standing at a window, hand in hand, still grieving.  “We were silently watching the glory of the setting sun,” she wrote, “until the golden hue had faded.”  Suddenly the words of a hymn—“Heaven’s morning breaks and earth’s vain shadows flee”—came into William’s mind.  The hymn in question—Abide With Me by Henry Francis Lyte—already had a melody.  But William was inspired by the thought of another, and “he took paper and pencilled the tune which has gone all over the world.” 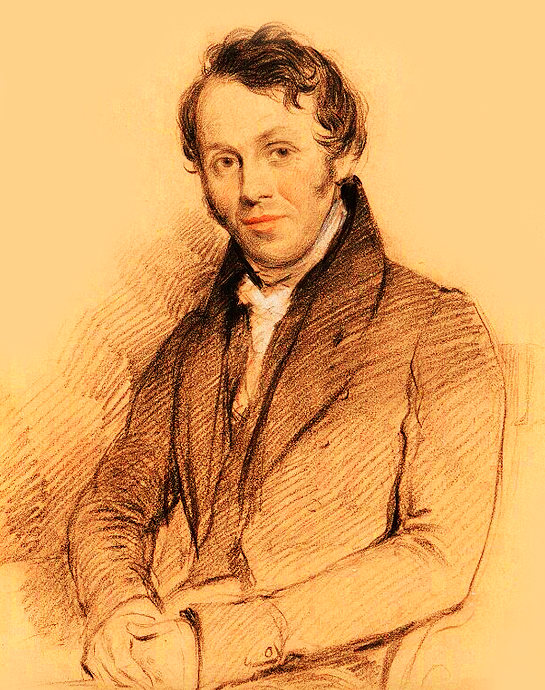 With the last light glimmering far away at the horizon, William gave the name Eventide to his composition.  And from that day Eventide has always accompanied Abide With Me.

OH, HOW IT ABIDES
All the world knows William Henry Monk’s poignant melody.  (A particularly beautiful rendition of it by a Salvation Army band can be heard here.  Another version, sung on a windy hillside in the North of England, is if anything more moving.)  We sing it on great sporting occasions, the final dying notes always followed by a second or two of profound reflective silence.  We sing it to mark significant moments of remembrance—Anzac Day, to name but one.  We like to think that the heroic bandsmen on the doomed Titanic were playing it even as the waters were rising, and that Edith Cavell sang it with the chaplain in her prison cell on the evening—how sadly appropriate!—before she was executed by the Germans.  We love it for its dignified tempo, for its sonorous restraint, for the heartbreaking chord on the third beat of the the eleventh bar. 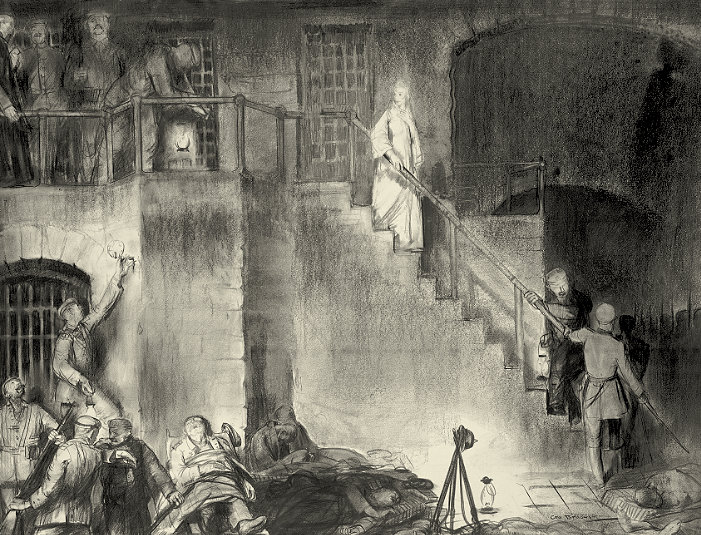 Edith Cavell going to her death at the hands of a German firing squad.  Image by George Wesley Bellows dated 1918.

But Eventide has had its detractors.  One musical purist, writing in 1865, complained that

we find in bar 3 a double minor seventh; in bar 5 an unresolved fourth-sixth; in bar 7 a minor seventh resolved upwards; in bar 11 a revival of the ill-sounding discord of major third and minor sixth; in bar 13 a strain commencing on a discord, and throughout the tune, wherever a discord will “stick”, there will such be found, viz. in 16 chords out of 40.

The writer of the letter, Stephen Georgeson Hatherly, could not have foreseen the enduring popularity of Monk’s noble melody.  Had he been able to, he might have been more tolerant of what he evidently saw as its shortcomings.  He might also have been more kindly disposed towards a man who had been moved to express in music the sadness of evening—of eventide—when the light fades and dies.