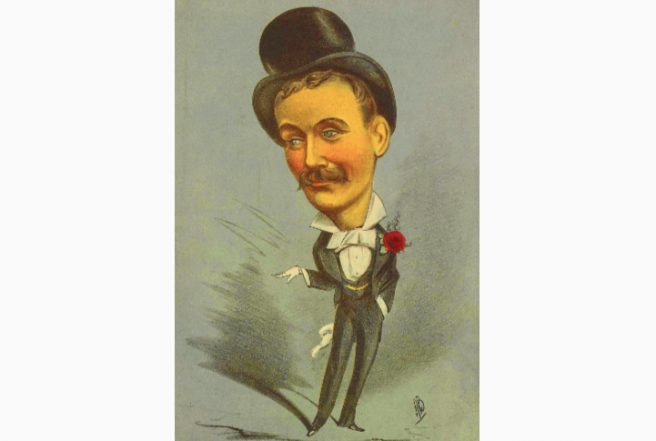 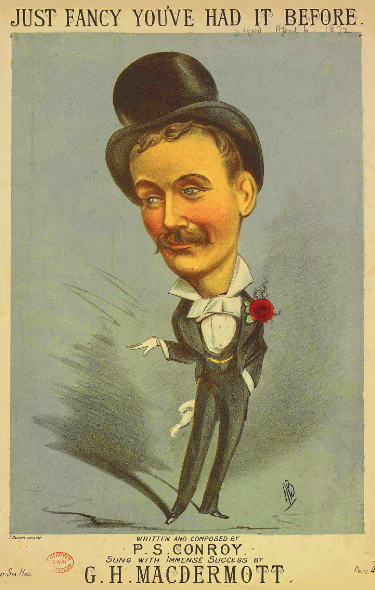 Music sheet for “Just Fancy You’ve Had it Before” dated c.19th century.  Published by Howard & Co.  © Victoria and Albert Museum

The story of a little boy named John Farrell who was badly beaten by his teacher, William Weale, was told in a previous post.  Weale’s future career proved easy to track: he became an authority on Flemish art, a published author, and Keeper of the National Art Library at the Victoria and Albert Museum.  Finding out what happened to the boy has been more difficult, as newspaper reports of the case provide little information about him or his family.  All that is known is that at the time of the beating in June 1851 John Farrell was six years old—so he was probably born in 1845—and that his parents were Roman Catholic Irish immigrants living at 4 Elder Walk in Islington.  No other identifying information is given.

I looked at the 1851 census—which was conducted a few months before the beating—for any John Farrell born in 1845 to Irish immigrant parents living in Islington.  The only candidates were Patrick and Mary Farrell, who lived on the opposite side of the Islington Road.  Although I cannot say that this John Farrell is definitely “my” John Farrell, I would ask you to take a leap of faith with me to see what became of Patrick and Mary’s son, a boy born into a life of poverty who died a rich and famous man.

MAC BY ANY OTHER NAME
John James Farrell was born on the 27th of February 1845 to parents who were originally from Galway in Ireland.  After an education at the Roman Catholic poor school, where he encountered Weale, John is said to have started work selling The Islington Gazette before joining the navy for nine years, probably from the age of twelve to twenty-one.  In the navy he took part in onboard entertainments, and decided to make this his career.  On his 1866 marriage certificate he is described as a dramatist, and from that point on he started using different names both on and off stage.  These included “Gilbert Hastings”, “John MacDermott”—MacDermott being his mother’s maiden name—“G H MacDermott”, “Gilbert Hastings MacDermott”, “The MacDermott”, “The Great MacDermott” and “Mac”.  From now on I will refer to him as Mac. 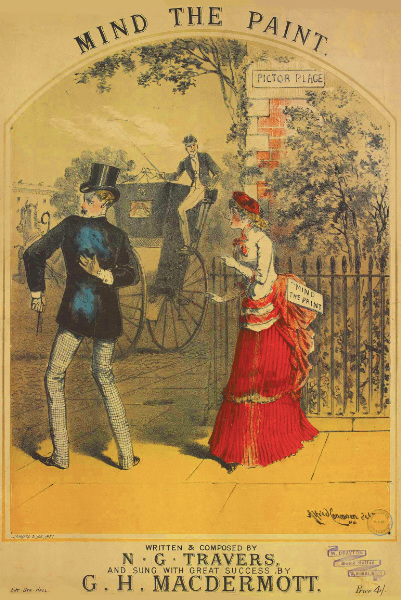 In the early 1870s he worked as an actor, and was associated with the Grecian Theatre, which was on the corner of Shepherdess Walk and City Road in Shoreditch and not far from where he boarded with his wife.  He supplemented his earnings by writing plays.  One of his successful enterprises was an 1872 adaptation of The Mystery of Edwin Drood, the unfinished novel Dickens was writing at his death in 1870.

Mac found fame and fortune as a music hall lion comique—the well-dressed man about town, the swaggering swell singing songs full of double-entrendres.  In 1874 he achieved success singing “The Scamp”, which was written by Henry Pettitt:

If ever there was a damned scamp,
I flatter myself I am he;
From Brigham to Odger,
There isn’t a dodger
Who can hold a candle to me!

The other “scamps” referred to include Arthur Orton—butcher-turned-Tichborne Claimant—and the fratricidal Cain.  Odger’s son took exception to the implied insult to his father George, a trade unionist, and won a court judgement forcing Mac to alter the lyrics, which did nothing to hinder his growing fame.  Even so Mac admitted that he suffered from stage fright whenever he had to perform at a new venue.  He would calm himself with a glass of champagne, perhaps associating himself with the “Champagne Charlie” in George Leybourne’s famous song. 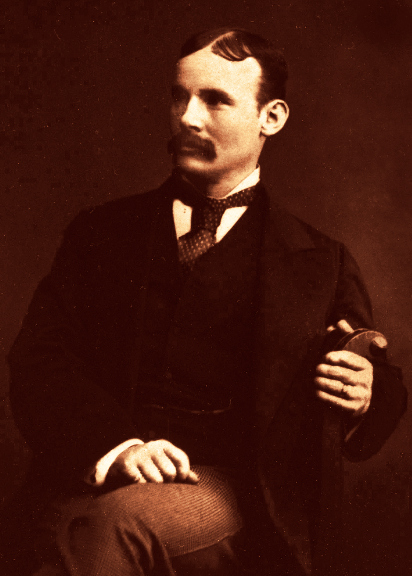 BY JINGO
Mac had married a Mary Ann Stradwick, and in 1874 they became parents to a son, whose full name was John James Maximilian Farrell.  The following year Mac went to New York for about nine months, although I am not sure if his family accompanied him or stayed behind.  On his return he had more success with a song called “Hildebrandt Montrose”:

His name is Hildebrandt Montrose,
Some folks they call him Charley;
In his buttonhole he wears a rose,
He can “Francais vooley parley!”
His hair in auburn ringlets;
His eyes an azure dark;
The girls they call him Birdie
Like the swallows in the Park.

This was followed by his most celebrated song, which was known as both “MacDermott’s War Song” and “By Jingo”.  The “War Song” had more impact on audiences than any other music hall song.  With Russia about to invade Turkey, and threatening British naval supremacy in the Mediterranean, Mac nightly whipped up such strong patriotic feelings at the London Pavilion that army recruitment officers were dotted among the audience, watching out for the most fervent young nationalists.

We don’t want to fight but by jingo, if we do,
We’ve got the ships, we’ve got the men, we’ve got the money too
We’ve fought the Bear before and while we’re Britons true
The Russians shall not have Constantinople. 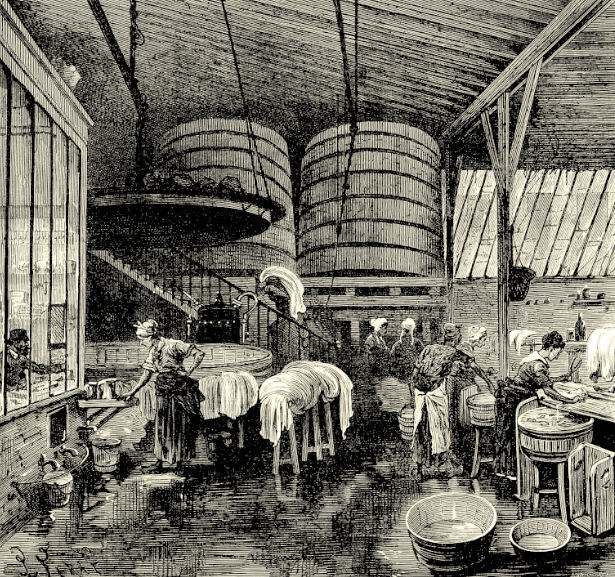 STARKLY DIFFERENT
Mac was living the high life on a salary of twenty-five pounds a week—up from six pounds and well over a thousand in today’s money—and performing in front of the Prince of Wales.  Meanwhile his wife Mary Ann had come down in the world.  In May 1879 she came before the courts charged with stealing two petticoats from the laundry where she was employed as an ironer.  It was revealed that owing to her drunken habits she and Mac had separated, although he continued to give her a weekly allowance.  She admitted that it was drink that had led her to steal the undergarments.  She was sentenced to one month’s hard labour.

Three months after she left jail, on Monday 12th September, Mary Ann and a fellow laundress, Sarah Pessey, were wandering down Fonthill Road in Holloway at about eight in the evening.  Mary Ann lived around the corner in Campbell Road, a street of poor lodging houses and furnished rooms.  The two companions, somewhat the worse for drink, were misbehaving and using obscene language, and when a Police Constable Marks tried to intervene Mary Ann assaulted him.  This time the court fined her ten shillings, which for a laundress was probably about a week’s wages.

The following February, in 1880, Mary Ann made a third court appearance, where she was again under the spotlight as the estranged wife of a well-known comic singer.  This time she was charged with stealing and pawning blankets and a quilt from her lodgings at 260 City Road.  The police had apprehended her in Covent Garden, where she was waiting for Mac to receive her weekly allowance.  Even though she was in the early stages of pregnancy, she was sentenced to three months hard labour.  In the autumn she gave birth to a child called Matilda Farrell.  In spite of the shared “Farrell” Mac refused to recognise Matilda, and it was probably at this point that he stopped supporting Mary Ann, who was bringing his name into disrepute.  For the next thirty years, and until her death, Mary Ann was regularly in and out of the workhouse, which suggests that she was unable to find employment or support herself in any other way.

The differences in their circumstances are starkly illustrated by the entries in the 1881 census.  Mary Ann and Matilda were in the Holborn workhouse, not far from the Grecian Theatre.  Mac, who now went by the name of Gilbert Hastings MacDermott, was lodging at 142 York Road in Lambeth at the centre of the music hall community.  In the 1880s he earned between twelve and fifteen hundred pounds a year, which these days would be in the region of a hundred thousand.  Some of these earnings paid for his son John to attend a boarding school in Edmonton, where at the age of seven he was by far the youngest boarder. 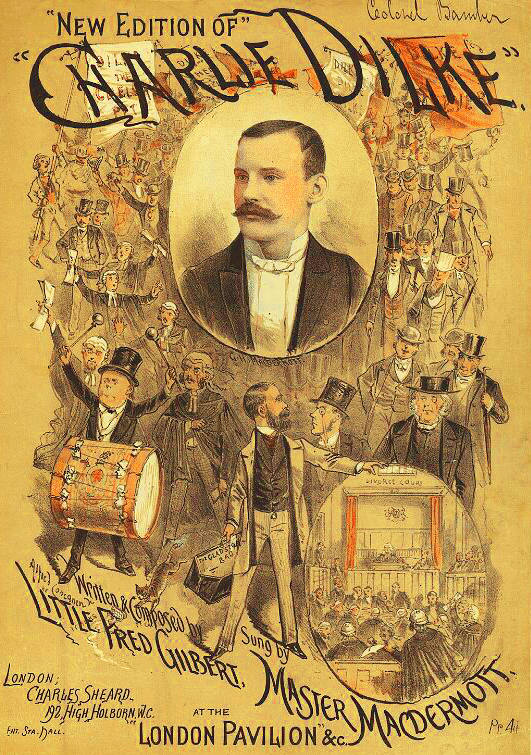 GOODBYE MARY ANN
In about 1883, during a run at the London Pavilion, Mac began a relationship with an Annie Milburn.  He was thirty-eight, and she was seventeen.  She was of theatrical stock, and had been on the stage ever since she debuted at the age of fourteen at the Sunderland Music Hall, which was run by her father, J H Milburn.  Annie and Mac went on to have four children together: Edward John, Gilbert Hastings, Annie Louise and James Patrick.  They were never able to marry, although it would appear that there were grounds for divorce on both sides.

In 1885 Mary Ann had another illegitimate child, Florence Farrell, who lived for barely a year.  There is no suggestion that she had a permanent partner at the time, so it is possible that like many women in poverty she was forced into prostitution.  In the same year Mac went bankrupt.  He had lost money in property speculation, and by his own admission he had thrown away thousands of pounds on the horses, but with his prodigious talent he was able to build up another fortune.  His latest hit—“Charlie Dilke spilt the milk”—was a scurrilous song about a member of parliament who had been named in a divorce case.  At the time of the 1891 census he was living with Annie and their family and two servants in Cowley Road in Brixton.  He then became a theatrical agent, and in 1894 he left the stage to manage music halls: the Hoxton Theatre of Varieties, Foresters Music Hall, and others.  His final appointment, in 1899, was as Director of the South London Palace of Varieties in Elephant and Castle. 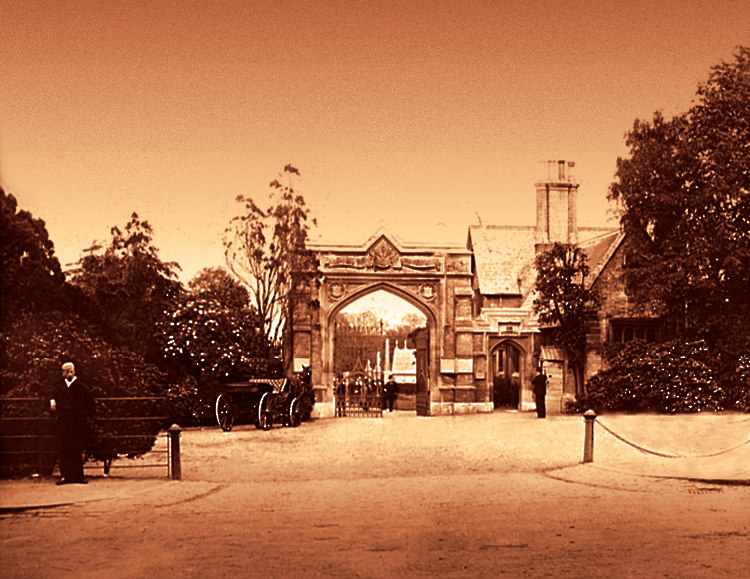 AND GOODBYE MAC
Mac died of cancer on the 8th of May 1901 at his home at 240 Clapham Road.  He was only fifty-six.  Six days later he was buried in West Norwood cemetery.  His oak coffin, fitted with resplendent brass masonic handles, was pulled in a glass panelled hearse by four horses.  The great and the good of the music hall attended the funeral, which was conducted by the Theophilus Dunkley we wrote about in an earlier article.

Annie’s burden of sorrow can only have been made heavier when it was revealed in Mac’s published will that they had never married and that their children were all illegitimate.  But for all that he had provided well for her and for her children and for his son John James Maximilian, leaving them over thirteen thousand pounds, which in today’s money would weigh in at over one and a half million.

As for Mary Ann, she outlived Mac by seven years, dying in the Holborn workhouse in 1908.  She would appear to have left nothing.

The German Siffleur, or, The Life and Times of Herr Von Joel