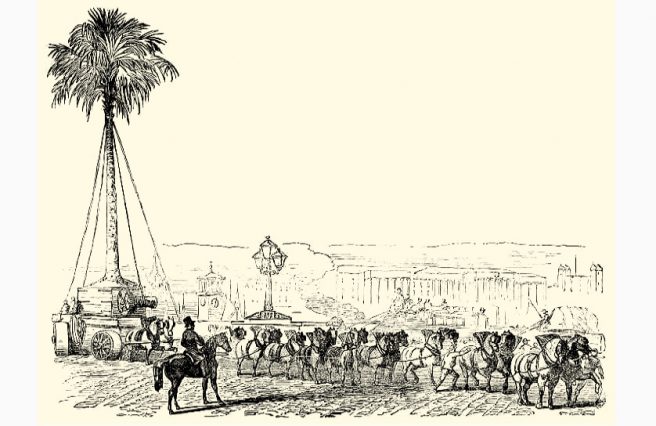 If you had been walking through the streets of what in 1854 was the village of Hackney on the 27th of July—a warm summer’s day—you would have witnessed a remarkable sight.  A team of twenty horses were making their way, very slowly indeed, down Mare Street, heading south.  They were harnessed to a massive carriage—effectively a sturdy platform on wheels of a vast diameter.  On that platform was a palm tree measuring about thirty feet in height and weighing in the region of a ton.  The tree had a curious history, for, although it had for many years been in the possession of Messrs Loddiges of Hackney, nurserymen extraordinaires, it had once belonged to no less a person than the Empress Josephine, wife of Napoleon Bonaparte. 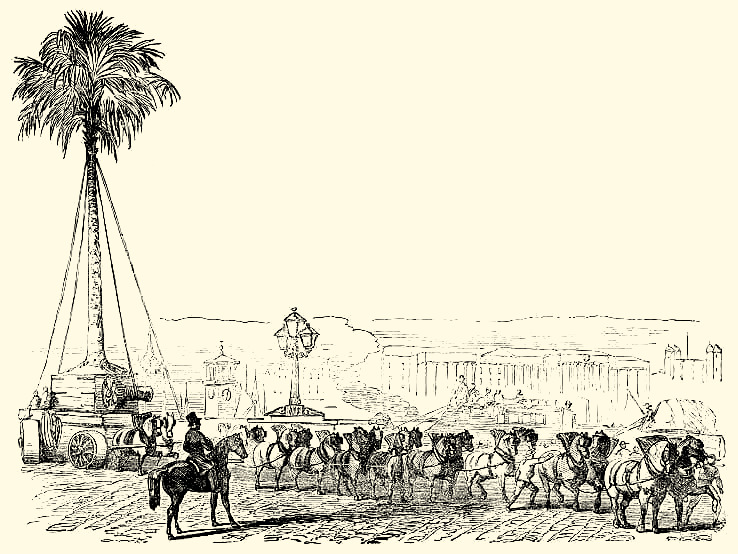 The palm tree takes to the road.  Image in The Illustrated London News 5 August 1854.

I first came across this story, quite by chance, while looking into a little-known aspect of the life of the Empress, namely her interest in botany and horticulture.  What I unearthed was a picture in The Illustrated London News showing the whole ensemble of horses, carriage and tree inching its way along the route.  The position of the rear wheel of the carriage suggests that a corner has just been turned, which must have been a particularly difficult manoeuvre.  Four guy-ropes are lashed to the tree, but, to the untrained eye, it still does not look all that secure.  (Incidentally, if you are curious about the man on the horse, then click here!)

LODDIGES NURSERY
The Loddiges were something of a dynasty.  The founder, Joachim Conrad, came to England from Hanover early in the 1760s, working in Hackney as a gardener for a doctor by the name of John Baptist Zachary Silvester, and then in the 1770s as overseer of the nursery established by another Hanoverian, Johann Busch, while the latter was on an eighteen-year secondment in Russia, designing imperial parks for Catherine the Great.  He ran a seed shop and a small nursery in Mare Street, and he bought Busch’s impressive client list, which enabled him to extend his professional network overseas.

Although Joachim Conrad truly put Loddiges on the map—acquiring land and premises, introducing exotic plants into the country, publishing the first trilingual nursery catalogue in Latin, English and German—it was his sons George and William who gave the nursery that technological dimension that made it a cutting-edge business.  George, for example, made important advances in hothouse design, using small-bore tubes to carry steam beneath iron grills set into the paths, and developing an overhead sprinkler that “rained” on the plants from pipes fixed below the roof.  In 1829 a visitor to the nursery, a gentleman by the name of Jacob Rinz from Frankfurt on the Main, described the experience in rapturous terms.  He thought for a moment that he was in the rainforests of Brazil—quite a feat of the imagination, given that Herr Rinz was in fact in a building in a field on the north-eastern perimeter of London!

JOSEPHINE AT MALMAISON …
All of which reminds me of a story about Josephine.   Between 1803 and 1805 she had built a magnificent glasshouse in the grounds of Malmaison, her château on the outskirts of Paris, where she assembled a collection of trees and plants from every corner of the globe.  Her visitors were stunned.  One, a Baron Uklanski , remembered entering a “vestibule of verdure”, a swirling mass of colour accompanied by intoxicating perfumes.  Another, a Countess Anna Potocka, claimed that she had been transported—like Herr Rinz—to tropical lands.

In the years following the collapse of the First Empire there was something of a trade in specimens that had once belonged to the Empress.  For example, there is a charming legend attached to some orange trees that grew in the orangery at Chatsworth House in Derbyshire.  A guidebook published in 1843—The Gem of the Peak; or Matlock Bath and its Vicinity by William Adam—claims that these “very fine” orange trees were formerly “part of the celebrated collection of the Empress Josephine” at Malmaison.  How they came to be at Chatsworth is nowhere recorded—although I have a theory!—but it is a fair guess that they were put up for sale at some point after Josephine’s death in 1814, a year before Waterloo.  Collectors and dealers no doubt found these high-profile house clearances hard to resist.

… AND AT FONTAINEBLEAU
Which brings us back to the palm tree.  This magnificent specimen lived not at Malmaison but at Fontainebleau, and we know a bit about its history, because its journey to England can be traced.  In the same year as Josephine’s death it was bought by Thomas Evans, a clerk in the offices of the East India Company, and a plant collector of some distinction.  Evans cannot have had long to enjoy his botanical loot—acquiring one of the Empress’s trees was probably seen as a symbolic victory over the French—because he too died in 1814.  Thereupon the palm tree, which at the time was all of five feet in height, was bought by Loddiges.  One can easily understand how that happened: Loddiges in Hackney was only a couple of miles from Mr Evans’s home in Stepney.  Probably there was an established relationship between these fellow professionals.

And there the stately Mauritius Fan Palm resided, for year after year, popping up in the nursery catalogue under its botanical name Latania borboniensis.  The catalogue makes no mention of Fontainebleau, let alone the Empress Josephine, but it is easy to imagine that visitors to the collection were treated to a well-rehearsed lecture on recent history, told, naturally, from the English point of view.  And that might have been end of the story, were it not for a remarkable event, namely the opening of the relocated Crystal Palace in Sydenham in 1854, and a remarkable man, the garden architect Sir Joseph Paxton.

SIR JOSEPH PAXTON AND THE CRYSTAL PALACE
The Crystal Palace was of course Paxton’s masterpiece.  But he had already worked for William Cavendish, the 6th Duke of Devonshire, at Chatsworth, and it is not impossible—the theory I referred to earlier—that it was Paxton who acquired the Malmaison orange trees for his noble employer.  Nor is it impossible that Paxton bought the trees from Loddiges.  My reason for thinking this is that when the palm tree trundled through the streets of Hackney on that balmy summer’s day in 1854, it was heading for the new Crystal Palace.  I would love to think that both the palm tree and the orange trees travelled to their respective destinations in England by the agency of Paxton and with the critical intervention of Messrs Loddiges.

The Crystal Palace at Sydenham.  Image in Cassell’s Illustrated History of England volume 6 (1898) opposite page 162.

Josephine’s tree left Hackney in a massive plant-box, which measured about twelve feet square, and was held together with strong iron hoops weighing fifteen hundredweight.  The carriage itself weighed over seven tons, and its load added another thirteen.  A team of twenty horses was harnessed to the carriage to drag it down to London Bridge and on to Sydenham, although at the foot of Sydenham Hill another ten or so were needed to get the mighty tree up to the top.  Not surprisingly the procession drew great crowds, and there were frequent stops, as enthusiastic spectators spilled off the pavements into the road, one of whom, the reporter from The Illustrated London News, wrote that

the progress of this stupendous plant through the metropolis, and the effect of the broad foliage—sometimes sweeping the three-storey windows of the houses—will not be easily forgotten.

By nine o’clock in the evening the tree had been safely installed in its new home in the Tropical Department in the northern end of the nave, where it kept company with a coffee tree from Yemen, a screw pine from the East Indies, a mahogany tree from Honduras, and fig tree from India.  Other than the delays along the way, there had been no incidents.  Whatever gods look over such events must have been smiling that day. 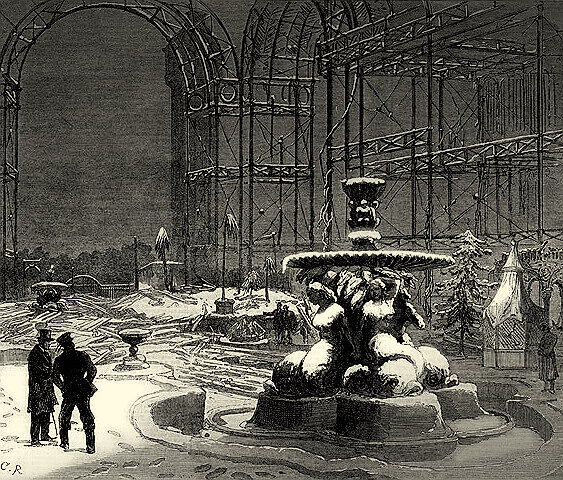 The snow-covered ruins of the Tropical Department of the Crystal Palace after the 1867 fire.  Image in The Illustrated London News 12 January 1867.

THE END OF THE TREE
So what happened to the Empress Josephine’s Latania borboniensis?  Almost certainly it was destroyed in a fire that ripped through the north transept of the Crystal Palace—the site of the Tropical Department—on a Sunday afternoon early in January 1867.  The aftermath of this melancholy event has been preserved by The Illustrated London News, the ruins given a surreal beauty by a fall of snow.

By then the once-great nursery of the Loddiges had been defunct for over a decade, laid low by the twin forces of money and progress.  The lease on the land, which belonged to St Thomas’ Hospital, had expired  in 1853, at a time when prices were rising—and air quality deteriorating—as a consequence of the building of the railways.  The closure of the nursery was handled by Conrad Loddiges, son of William and grandson of Joachim Conrad.  How sad it must have been for Conrad to have to wind down a business that had been in the family for three generations.  Still, he managed to find good homes for the displaced stock, and Josephine’s palm tree was not the only evacuee rescued by Paxton and the Crystal Palace Company.

Now, though, all that remains of this extraordinary family is the name given to Loddiges Road in Hackney, work on which started in the late 1850s.  Mare Street is still there, as a stretch of the A107.  The Crystal Palace has of course gone for good.  But that, as they say, is another story.

FURTHER READING
For an account of the Empress Josephine at Malmaison, see William Ellis-Rees Josephine in the Mountains, which is available at Amazon as a downloadable ebook.