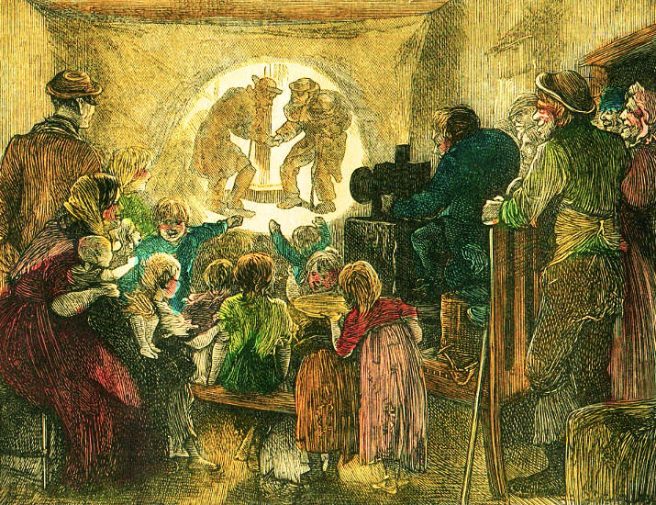 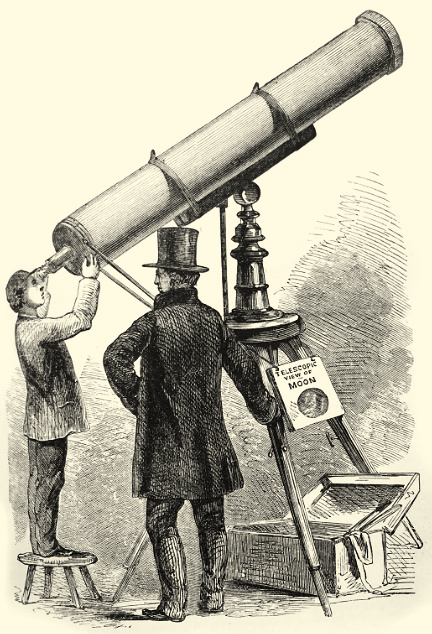 Street exhibitor showing off the properties of a telescope.  See SWALLOWING RATS below.  Image in Henry Mayhew London Labour and the London Poor volume 3 (1865) between pages 81 and 82.

If you read my recent post on Peter Carpenter, you will recall that our knowledge of him rests largely on the journal kept by his mentor, Martin Ware.  In studying the journal for the year 1856—which was when the young Londoner enrolled in the navy as an apprentice—I came across an intriguing entry that has subsequently sent me off on a new and rather different trail.

The date of the entry is the 30th of January.  Ware was recording the activities of the charitable organisations he was associated with, namely the ragged school in Compton Place in Bloomsbury, and the Shoeblack Society, which trained boys from the slums for a life of gainful employment.  The boys were given strict moral guidelines, which, at the risk of resorting to a cliché, we might well describe as firm but fair, and which emanated from a characteristically nineteenth-century brand of stern but compassionate Christianity.

But there was entertainment, too, of a family sort—many of the boys would never have experienced family life as we understand it—and accordingly we read the following:

Wednesday.  Big boys’ treat.  About 24 present.  Mr Sansom showed dissolving views.  The evening was very successful and afforded great ground for thankfulness.  Many lads or rather young men present who had been almost brought up at our School. 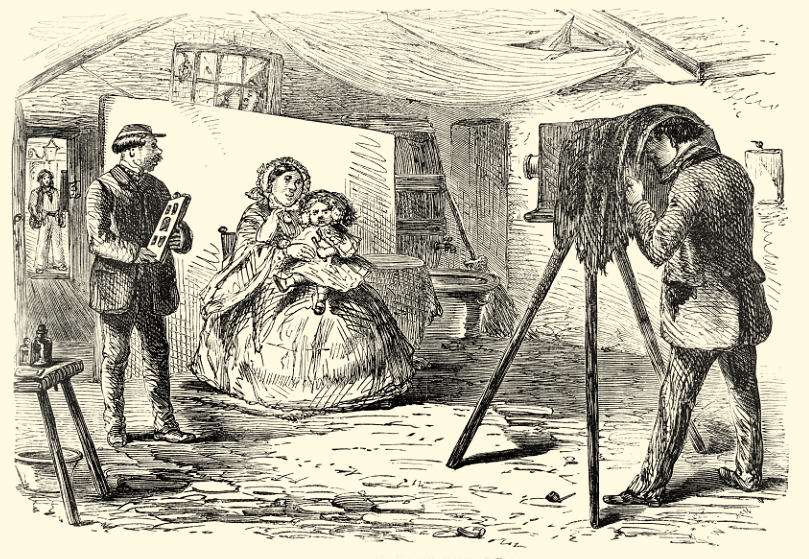 A photographer’s “saloon” in the East End of London.  See SWALLOWING RATS below.  Image in Henry Mayhew London Labour and the London Poor volume 3 (1865) between pages 207 and 208.

I am sorry to say that I do not know who Mr Sansom was—I am still trying to track him down—but I have a fair idea what his “dissolving views” would have been.  In fact the dissolving view has an interesting history, and in what follows I hope to shed a little light on the matter, which, as you will see, is a curiously apt metaphor!

SIMPLE BUT BEAUTIFUL
The dissolving view is a particular application of the magic lantern, and so it is there that our story must begin.  The magic lantern—which was not unlike the slide projector that we were all familiar with until relatively recently—has existed in one form or another for a surprisingly long time.  First prize for its invention is generally awarded to the great seventeenth-century Dutch physicist Christiaan Huygens, but the concept of image projection had already been proposed by, amongst others, Leonardo da Vinci. 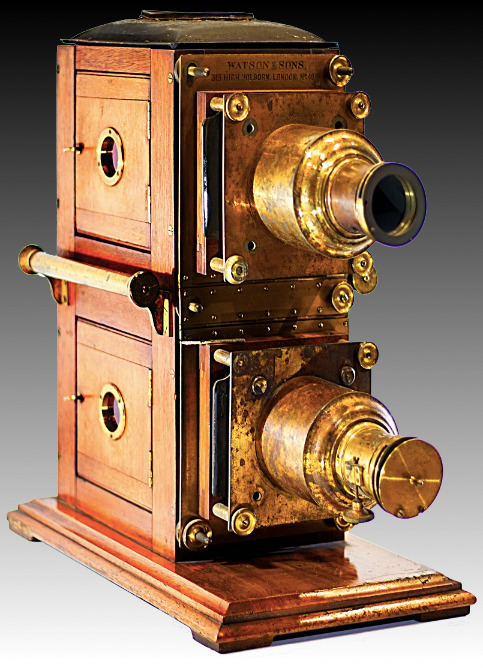 A magic lantern made by the London firm of Watson & Sons.

The magic lantern was in essence a device for shining light through a painted slide, which was in most cases a glass plate.  The image was then projected through a focusing lens on to a screen.  In Huygens’s day the light source would have been a candle or an oil lamp.  In later times a more powerful light was produced by the Argand lamp and the limelight lamp, and later still by the electric arc lamp, and then of course by the electric bulb that is still in use today.

Although in scientific terms the magic lantern was little more than a container with some odds and ends inside, it was capable of being a delightful object in its own right.  Stunningly beautiful examples survive, crafted from polished wood and brass, combining engineering precision with the appeal of true craftsmanship, and as pleasing to the eye as the large plate cameras used by the early photographers.  The slides were originally painted by hand, although this painstaking method was later superseded by the use of decalcomania transfers, and then in due course by photographic techniques.  A single slide—which was a strip of glass—might have several images on it.  And if adapted to allow the projected images to fade into one another, the lantern produced the dissolving views that so delighted the boys in Mr Sansom’s audience. 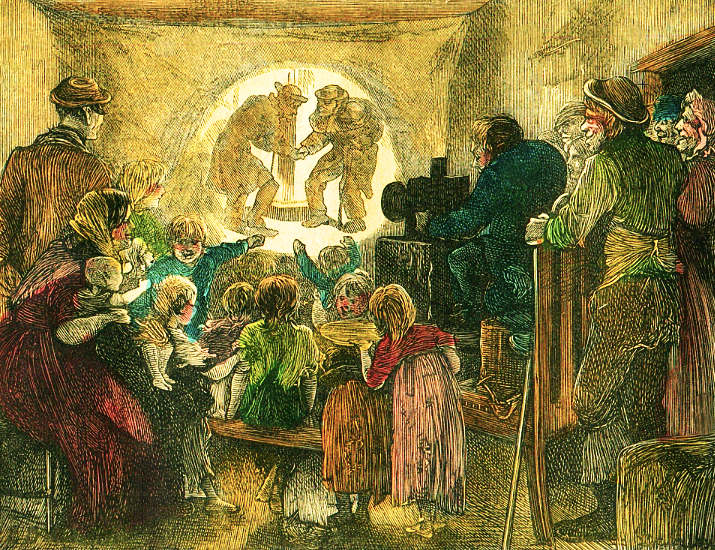 A magic lantern show for children in the East End of London.  Hand-coloured print.  Original image in The Sunday Magazine 1 January 1869.

SWALLOWING RATS
My search for illustrations produced interesting results.  There was little difficulty in finding technical cutaways of the internal working of the magic lantern, which, like the lanterns themselves,  are often very beautiful.  Similarly the use of lanterns in scientific demonstrations or theatrical entertainments is generously covered.  Less so, however, the sort of entertainment put on by the mysterious Mr Sansom, with an audience sitting not in a comfortable lecture hall but in a meeting place for the poorer classes.  I thought that I had come quite close with two remarkable plates in volume two of Mayhew’s London Labour and the London Poor, showing respectively a top-hatted gentleman exhibiting a telescope in a London street, and a mother and child being photographed in an East End studio.

However, I did in the end find two images of the sort that I was looking for, and they are fascinating.  The first—a magic lantern show in full swing—can be dated to the late 1860s.  Although rather crudely drawn, it has considerable charm.  The setting is the East End of London, and the scene is a Christmas treat for the children of poor families.  Their pleasure at the projected picture is seen clearly in their expressions and pointing hands.  The adults are enjoying themselves as much as the children.  If only I could claim that the projectionist, crouched over his lantern, is Mr Samson.  He is not, but he is worth a word or two, and I will return to him later. 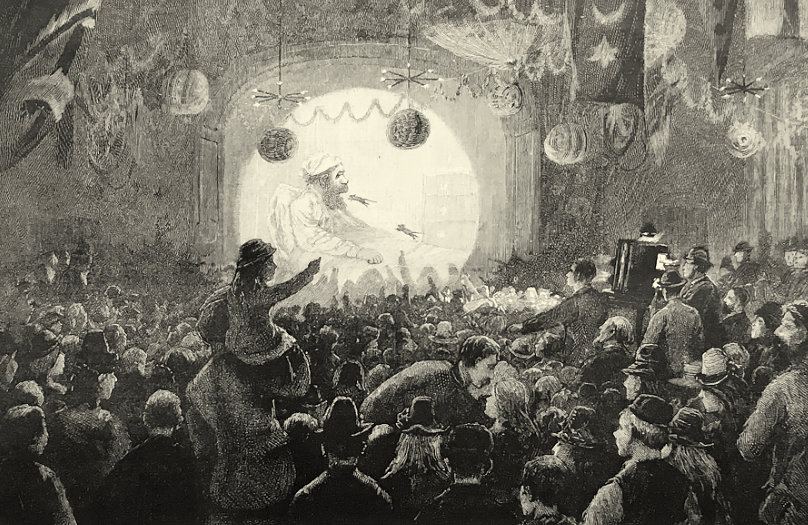 Magic lantern show for working-class children at the Fulham Liberal Club and Institute.  Image in The Graphic 23 February 1889.

Goodness only knows what the story on the screen was.  Quite possibly the picture of the two stooping figures had an element of animation, an effect created by means of fixed and moving slides.  Rather more is known about the screen story in the second image, which was published in The Graphic twenty years later in 1889.  The audience is again children and their families, and again their excitement is palpable.  A girl is sitting on her father’s shoulder for a better view, pointing at the screen.  Rats are seen to leap up towards a man in a nightcap, who in snoring obligingly opens his mouth wide.  The story was evidently popular, and slides of men swallowing rats survive. 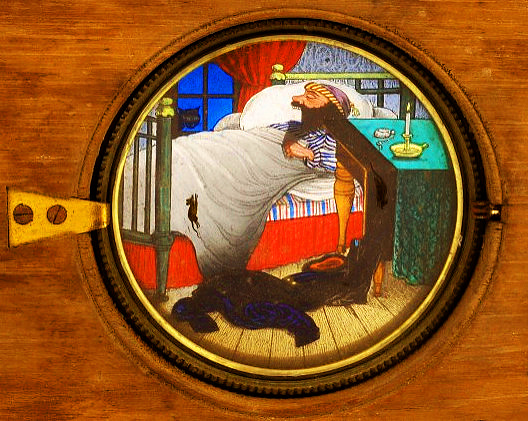 THE EFFORTS OF WORKING MEN
What was the occasion?  According to the caption in The Graphic the performance was put on by the Fulham Liberal Club and Institute for a vast audience of one thousand four hundred and fifty “poor and destitute” children.  Clearly this was a bigger affair than the 1869 entertainment in the East End, staged in a theatre of sorts with decorations hanging from the ceiling high above the heads of audience.  In a brief paragraph The Graphic comments that

this treat is given yearly, and is an interesting example of a very praiseworthy effort by working men to be charitable to those of a still poorer class.

The entire treat, which included a tea for the participants, cost twenty-eight pounds.  The club paid, looking to the outside world neither for funds nor for help.

The Fulham Liberal Club in Walham Green had been founded by Henry Cunynghame, who, as well as serving as a lieutenant in the Royal Engineers, and practising as a lawyer, wrote books on subjects as diverse as the art of enamelling and the science of electric lighting.  He was quite the man of science, and in 1886 he delivered an illustrated lecture at a venue in Fulham, using limelight to project images of the landscape and temples of Egypt.  In all likelihood he had a hand in the club’s magic lantern presentations, and, peering again at the picture in The Graphic, I catch myself wondering if he is the splendidly whiskered operative, or the chap next to him who is providing what would now be the soundtrack. 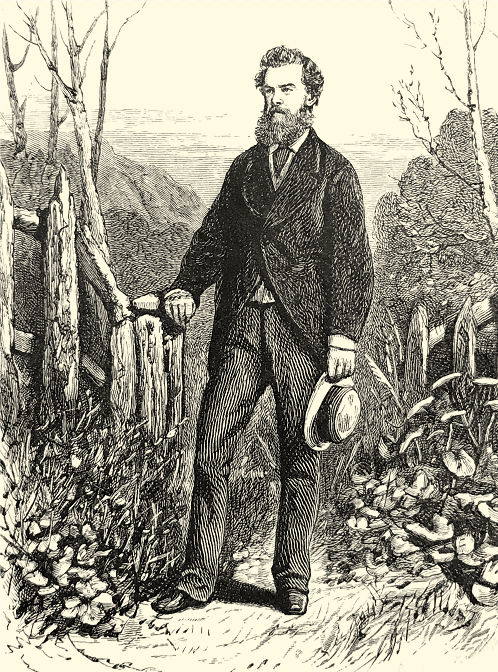 Portrait of Richard Rowe.  Image in Richard Rowe Passages from the Diary of an Early Methodist (1880) frontispiece.

A CHRISTMAS TREAT
But to return to the East End slide show.  The picture appeared in The Sunday Magazine, an evangelical journal, to accompany a story by Richard Rowe, a Methodist minister and writer, and a sympathetic observer of the lives of working-class Londoners.  Rowe recalled an occasion when “in the wilderness of dingy brick on the Surrey side of the Thames” he encountered a fellow by the name of Hoppety Bob.  Poor Bob was sadly deformed, small and hunched, and with one leg hanging “springless and shrivelled as a broken, withered twig”.  But he was a kind soul who made toys for the neighbourhood children, and taught them to read.

Rowe particularly remembered the Christmas treat Bob laid on for his little pupils.  The toymaker put his hand in his own pocket—he had “saved up a few shillings for his feast”—to provide bread and butter and cups of milky sugary tea.  After a game of blind-man’s buff, and another of hunt-the-slipper, Bob set up the magic lantern, which he had borrowed from the toyshop where he worked.  And it is Bob himself we see in the picture in The Sunday Magazine, crouching uncomfortably over the marvellous machine that held the poor ragged children and their parents spellbound. 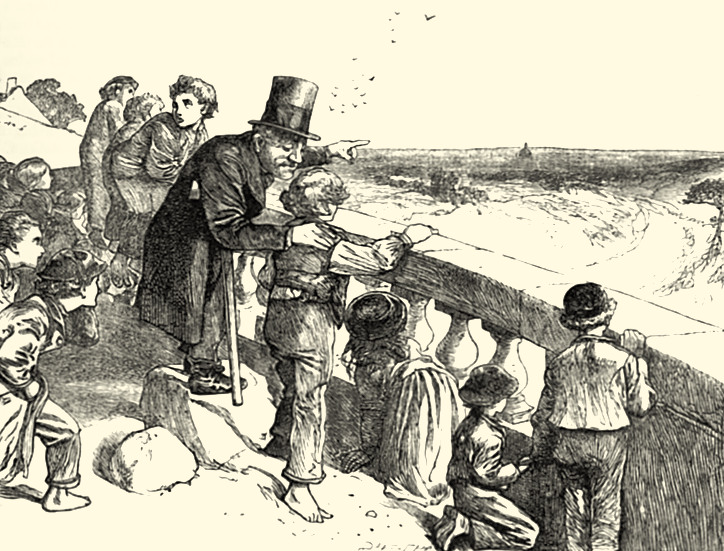 Hoppety Bob with his pupils on a trip to the country.  Image in The Sunday Magazine 1 April 1869.

I have to confess that I love this image.  For all the sadness of their lives, the children are sublimely happy.  And just as in the hands of a skilled projectionist one magic lantern image could be made to fade into another, I find that with only a little effort of the imagination the children of the South London slums become those of the East London slums, and Bob becomes a plausible substitute for the still unidentified Mr Sansom.

ACKNOWLEDGEMENTS
I would like to thank George Auckland and other members of the Magic Lantern Society for their help in locating the image of the East End children’s entertainment.