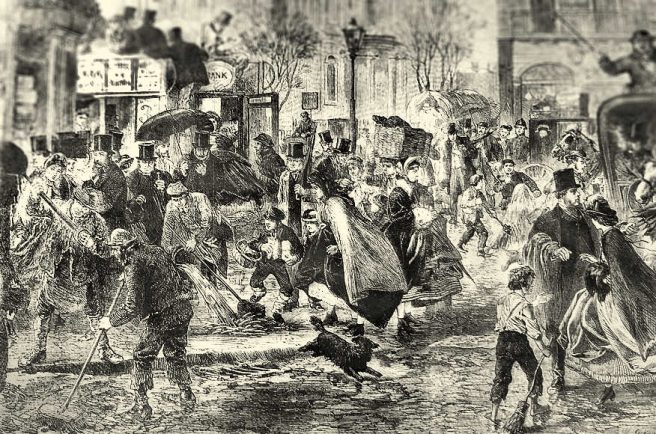 The soup kitchen in Leicester Square.  Image in The Poor Man’s Guardian 11 December 1847.

If you read my earlier post on the work of the National Philanthropic Association, you will know that it was a charitable institution founded in 1842 by Charles Cochrane.  The principal object of the enterprise was to keep the streets of London clean, but it went on to run a soup kitchen in Leicester Square, and a refuge, the Mount St Bernard Hospice, which was named after the famous alpine hostel.

Some idea of the work of the Association can be formed from its annual reports.  In December 1849 alone relief was given to over eleven thousand destitute Londoners.  These were not only men and women but children as well.  On Christmas Day over a thousand individuals were treated to generous quantities of bread and soup, and beef, and plum pudding.  Many of the women, it was pointed out, were widows with large families who had lost their husbands to cholera. 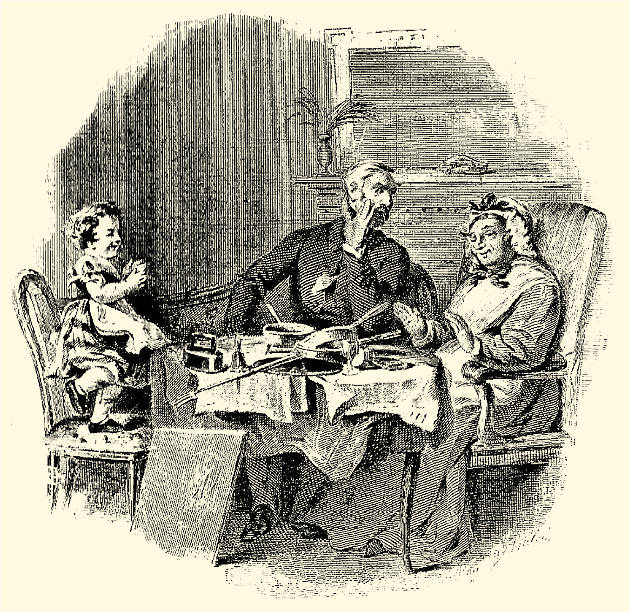 “I’m going Madam,” the Major says to Emma in Dickens’s story Mrs Lirriper’s Lodgings, “to make our child a Calculating Boy.”  The child in question, Jemmy, is the little chap standing on the chair, resplendent in dress and apron.

The reports of squalor and despair are shocking.  A shoemaker of Marylebone, who earned six shillings sixpence a week, of which over a third was paid as rent, fed his four children on bread and butter.  An indigent Lambeth seamstress, who stitched jackets and trousers from nine in the morning until ten at night to earn three shillings sixpence a week, of which once again a third was lost as rent, had to subsist on bread and butter with tea or coffee and the occasional herring.  A hatter in Borough, who earned on average less than a shilling a day but paid a weekly rent of two shillings sixpence, slept with his wife on a bed of wood shavings in a room with no furniture.  Their provisions consisted of bread and potatoes and a little tea, and even this little they could not always afford.

But one of these stories, although set against a similar background of terrible poverty, has in it a note of profound optimism.  The subject of the story is a boy by the name of Edward Leyden.  He is just about as overlooked a Londoner as it is possible to be.  And yet he has survived, in a brief paragraph in the report for 1850, and it is clear that he was really rather remarkable. 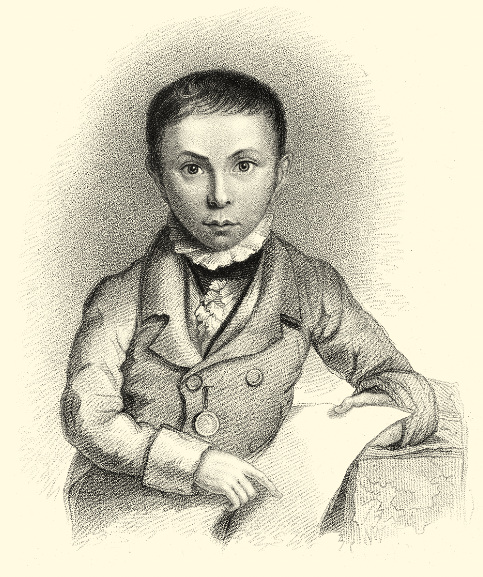 George Parker Bidder with the fire of genius blazing in his young eyes.  Engraving by Joseph Marriott.  Credit: Wellcome Collection  CC BY

A CALCULATING BOY
Edward was born in about 1835 in what is now Mumbai but was at the time called Bombay.  Eventually he came to England, and, although it is not clear when exactly he arrived, he was certainly in the capital by the time he was fourteen.  He lived in desperate poverty, but he had an extraordinary gift for mental arithmetic.  In other words he was a “calculating boy”, and, as such, he was just about able to stay afloat.

A good example of a “calculating boy” is the renowned George Parker Bidder.  Born in Devon in 1806, the young Bidder displayed astonishing ability from his earliest years.  He had a remarkable memory, as did his two brothers, one of whom taught him to count to one hundred, which was just about the only help anyone ever gave him.  Almost inevitably he was exhibited, and he made a tidy profit for his father—a stonemason—who toured the country with his supremely talented son. 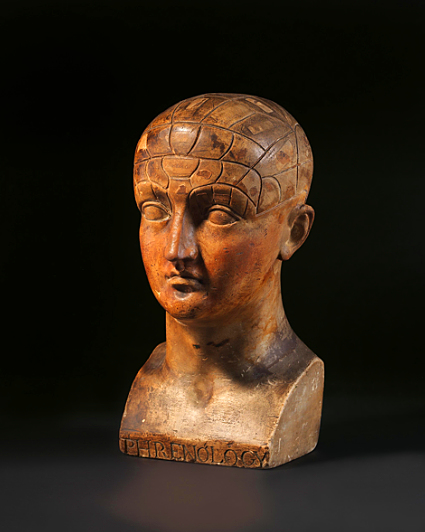 A phrenological bust made in plaster by James De Ville.  Dated 1821.

Many of the boy’s feats of calculation were published in pamphlets.  At the age of ten he was working out complex multiplication and division in his head.  A year later he was handling geometrical progressions.  Two years later, at the age of thirteen, he extracted the cube root of an eighteen-digit number in two and a half minutes.  He went head-to-head with an American prodigy by the name of Zerah Colburn, and, although the report of the encounter is of dubious authenticity, he seems to have knocked his transatlantic rival into a cocked hat.  He also attracted the attention of James De Ville, the phrenologist of one of my earlier posts.  De Ville took six casts of his head between the ages of eight and twenty-eight, measuring the development of his mental faculties in spurts of cranial expansion.

But life held more in store for George Parker Bidder than these vaudeville appearances.  Through the intervention of various benefactors—who were more generously motivated than his father—he was finally given a formal education.  He made his mark as a versatile engineer, working on the construction of railways and the development of electric telegraphy, and advising the government on naval and military projects.  By the time he died in 1878 he had been a member of the Institution of Civil Engineers for almost fifty years, and in his mid-fifties was elected president.  Not bad for a working-class boy from a small town—Moretonhampstead—on the edge of Dartmoor. 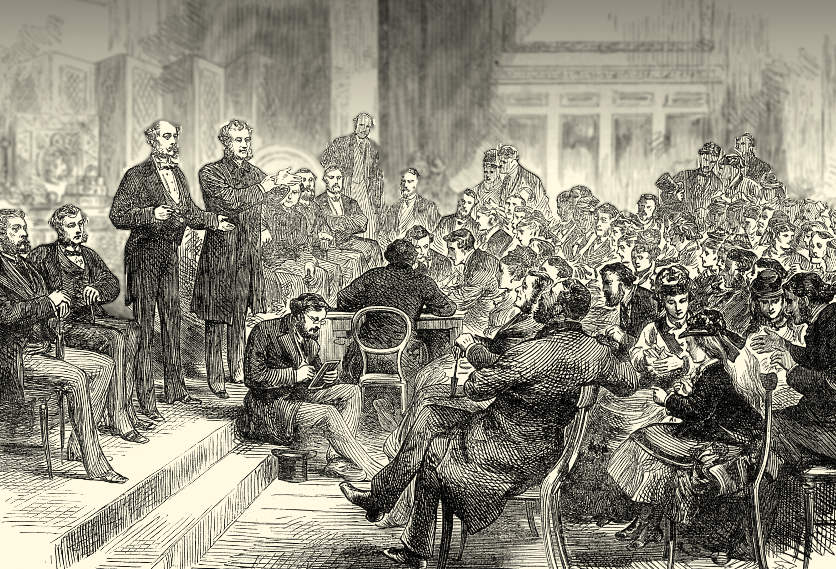 A demonstration of sign language at the Freemason’s Tavern in London.  George Parker Bidder might have exhibited before such an audience.  Image in The Illustrated London News 23 January 1875.

PULLING THE CROWDS
Poor Edward Leyden put his talent to use as a form of entertainment, just as George Parker Bidder had once done, although he would never enjoy celebrity or professional success.  He performed for the simple reason that he had to scrape a living.  And he was able to pull the crowds.  He dispensed with pen and paper—although he might demonstrate his methods in writing—and he devised ingenious shortcuts for tackling complex sums.

These, however, were unlikely to have been the meetings of learned societies where the Bidders and the Colburns were exhibited.  In all probability they were local gatherings on the other side of town, as it were.  In fact we read in the 1850 report that the fourteen-year-old Edward exhibited his powers of mental arithmetic at public houses, where, one might guess, any sort of human or animal curiosity might command the attention of a well-lubricated audience.

In due course he sought refuge in the Mount St Bernard Hospice.  He was utterly destitute, walking the streets without shoes or stockings.  And his parents?  We can only speculate.  Possibly the Catherine Leyden who appears in the 1851 census as a dressmaker, aged forty-five and unmarried, was his mother.  (More about Catherine later.)  But of his father there is not the slightest trace. 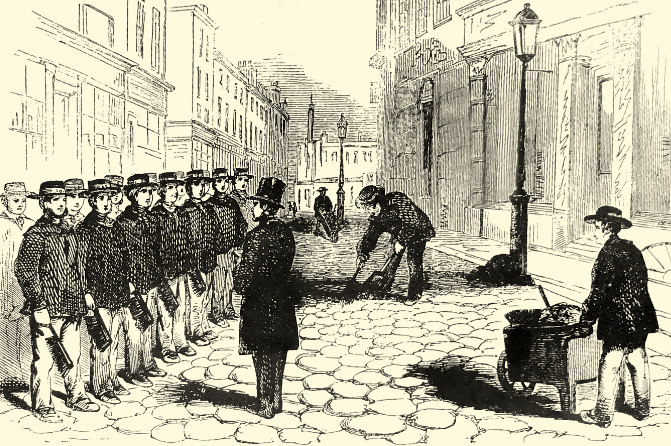 Charles Cochrane inspecting his uniformed street orderlies outside the headquarters of the National Philanthropic Association.

The National Philanthropic Association found employment for Edward.  For a while he worked as one of Cochrane’s street orderlies.  The orderlies cleaned the streets, and kept their eyes open for pickpockets and burglars.  They were paid a modest wage, which Cochrane believed brought with it a degree of self-reliance and dignity.

But when a “situation with a merchant in the City” was secured for Edward—once again our source is the 1850 report—his life improved dramatically.  The good people who were looking out for him saw that he was suitably clothed for the new world he was about to enter.  They seemed to think that his new employer would have him educated, and would see to it that he got on in life. 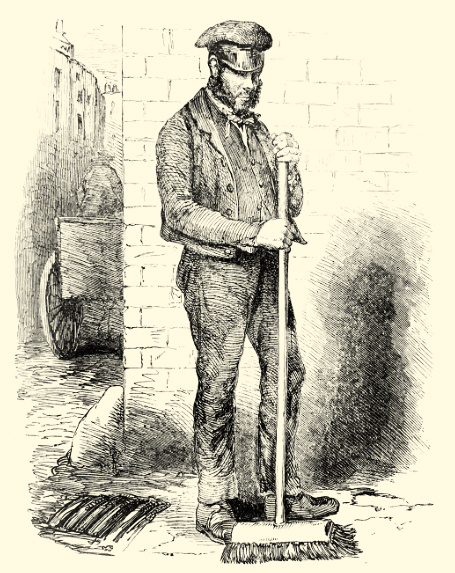 What Edward Leyden might have become.  Image of a street-sweeper at Henry Mayhew London Labour and the London Poor volume 2 (1861) between pages 262 and 263.

MORE ABOUT CATHERINE
Who was the benevolent merchant?  The report does not say, but the 1851 census gives us a possible lead, for the sixteen-year-old Edward Leyden who was a “stationer’s assistant” is pretty likely to be our Edward Leyden.  He was lodging with two fellow stationers and their family in Bishopsgate.  A nineteenth-century stationer might of course have been a seller of writing materials, but equally might have been a bookseller, or a bookbinder, or a printer.  Whatever his exact occupation was, it must have been better than sweeping the streets.

But is the young stationer’s assistant our Edward Leyden?  We have reason to think so.  For in the same census—1851—the Catherine Leyden we mentioned earlier was lodging with a Hannah Cross in Leadenhall Street in the City.  She was a printer and engraver, and so it is just possible that we have found Edward’s benefactor after all.