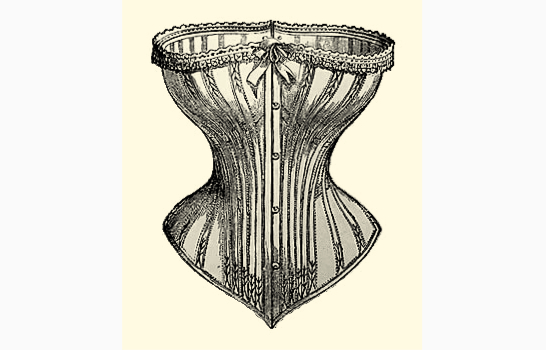 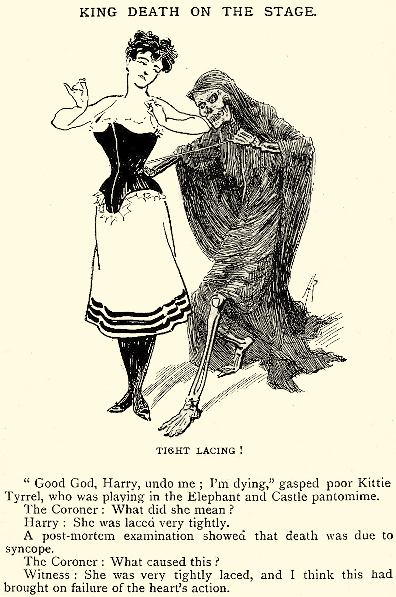 The lives of most Victorian jobbing actresses are largely forgotten, their performances barely recorded apart from a few brief mentions in the theatrical papers.  And this would no doubt have been the fate of Kitty Tyrrell, if she had not had the misfortune to be killed by her corset.

On Tuesday the 26th of December 1894 Kitty and her husband Harry Ewins were appearing in Dick Whittington and his Cat at the Elephant and Castle Theatre—where the cinema is now.  Kitty was playing the villainous King Rat, and Harry, a well-known clown, was Johnny Nod in the pantomime and a clown in the harlequinade.

The first show of the season had taken place in the afternoon to a packed house, a Boxing Day treat for many local families.  At half-past seven the evening performance began, with Kitty dancing on in the first act and uttering the prophetic line “His road to fortune he’ll pave o’er my corpse”.  Harry Woolcott, one of the stage hands, noticed how tired she looked.  Ever the professional, she was back on for Act Two, and, after singing a duet with Miss Daisy Gertrude, she danced off the stage smiling.  But Kitty barely made it to the wings before she collapsed, asking for her husband to be called.  When Harry appeared, she begged “Oh, Harry, do unfasten me.  I’m dying!”  Taken to a dressing room she was laid on a sofa.  Her corset was unlaced, and she was plied with smelling salts and vinegar.  When she could not be revived, a local doctor, James Barber of 188 Newington Causeway, was summoned.  Arriving at nine o’clock Dr Barber announced that there was nothing that could be done.  Kitty was dead.

The tragedy behind the scenes was kept from the audience, and, although the cast were understandably very distressed, they continued with the performance.  A Mr Fred Tingey stood in for Kitty, but almost unbelievably the newly widowed Harry also carried on performing his comic roles.

The inquest at Newington Coroner’s Court took place on the following Friday.  The coroner enquired why Kitty had asked her husband to unfasten her, and was told it was because her corset was tightly laced.  Dr Barber then explained that he thought that the tight lacing might have aggravated an existing heart condition—Kitty was unable to get enough oxygen and died of syncope.  Harry sadly confirmed that she had complained of her heart only the week before. 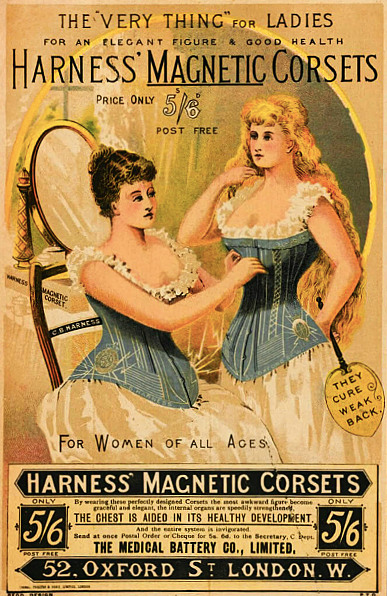 The press made much of this death by corset.  Corsets were the mark of a respectable woman, and were worn by all sections of society, by pregnant women and even by children.  There is much debate about the actual size of the Victorian corset, as they did not have to be laced edge to edge to do their job, but contemporary photographs do show women with extremely small waist to hip or bust ratios.  It is interesting that a piece of clothing should be so contradictory, accentuating a virginal waist, however artificial, with rather motherly bust and hips.

The benefits and putative dangers were much discussed.  Corsets were blamed for damaging and displacing internal organs, causing miscarriages and hurting unborn children.  They were also held responsible for the image of the invalid Victorian lady, and, whatever else they did or did not do, there can be no doubt that they chafed the skin, restricted breathing and made women extremely uncomfortable, hot and sweaty.  For feminists and dress reformers, who were often the same people, the corset was a tool of oppression—“a prison,” as Dr Mercy Jackson wrote, “barred with whalebone and steel”.  Restricting a woman’s movements could restrict her ambitions, and I am reminded of recent news stories about compulsory high heels at work. 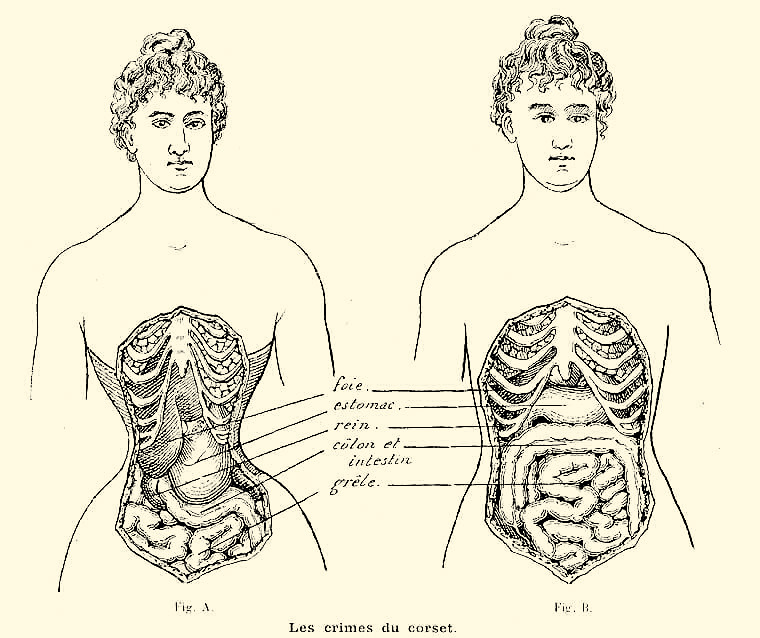 lllustrations to denounce the crimes of the corset.  Credit: Wellcome Collection  CC BY

As we can tell from Kitty’s terrible demise, even an actress singing and dancing on the stage could not escape the corset.  At this stage in her career, I suspect Kitty was putting on weight, as she no longer played ingénues, had given birth to a child, and was described as “an imposing and handsome Hawkshaw” in Sinbad.  Perhaps this put her under pressure to tight-lace: even if the Victorians did not fetishise the extremely thin to the extent that we do now, maintaining a tiny waist was the norm.

Being an actress in popular theatre, and particularly in the music hall, meant women were admired for displaying both their artistic talents and their physical attributes.  But they were also disapproved of as working women who might need to reveal a little more of those attributes than was thought decent in order to carry out their trade. 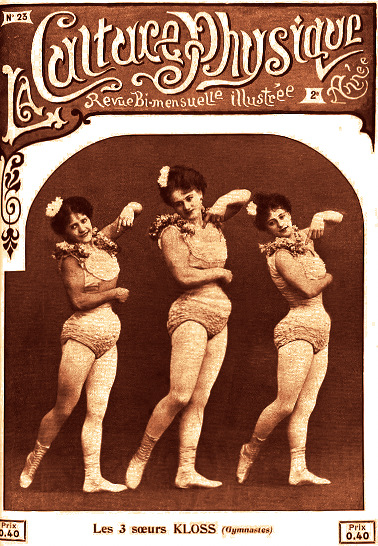 Performers in music halls, pantomimes and ballets wore more exposing costumes than the average woman would dream of.  When a poster of Zaeo the trapeze artist wearing flesh-coloured tights and a close-fitting tunic appeared in the 1890s, considerable disquiet was expressed by the London County Council about the amount of flesh on show.  What exactly they expected her to wear while performing death-defying feats I cannot imagine.  Burlesque dancers and serio-comics usually sported knee-length skirts and low-cut corseted tops with bare arms.  Even those dressed as men in breeches or trouser roles accentuated their very femaleness.  The pantomime boy might wear a corseted top with short drawers decorated with fringes that drew the eye to the crotch or backside.  Even full trousers accentuated the hips, waist, buttocks and groin—a question of what was absent drawing the imagination to what was present.  Kitty would have known what it was to be both admired and disapproved of for doing her job.  But her milieu, friends and family were theatrical, and so she might not have given a hoot what the respectable middle-classes would have thought of her.

Kitty’s final performance was on Tuesday the 2nd of January 1894, when she was buried as Kathleen Ewins, aged thirty-five, in Willesden Cemetery in the presence of family and pantomime colleagues.  Her coffin of polished oak left Sayer Street, near the Elephant and Castle, shortly after one in the afternoon.  It was followed by four mourning coaches, the first bearing Harry and little Amy Kathleen.  The others—private broughams—carried members of the pantomime.  A very sad story, but let us try and recover a bit more about Kitty Tyrell the professional woman.

Kitty’s origins are rather mysterious.  Supposedly born in Antrim in Northern Ireland in about 1859 she was variously known as Catherine, Kathleen, Kate, Madeline Kathleen and Kitty.  Tyrrell was probably a stage name taken from the Irish ballad Kitty Tyrrell.  She was not a famous actress by any means, appearing mostly in provincial theatres—in Cardiff and Great Yarmouth and elsewhere.  In London she performed mainly south of the river in supporting roles.  No doubt a hard life, but probably more fulfilling and exciting than being a domestic servant or a dressmaker.

In 1884 she is known off-stage as Mrs W H Perrette.  William Henry Perrette was a fellow actor who seemed to have rather a lot of “wives”—Mary E, Kitty, Beatrice and Clara at the last count.  I have not been able to find a record of his marriage to Kitty, but he was definitely married to Clara, as the marriage certificate is extant.  When disengaged, Kitty’s adverts in the trade papers say she is available to play chambermaids and boys.  At one stage she plays Oliver Twist. 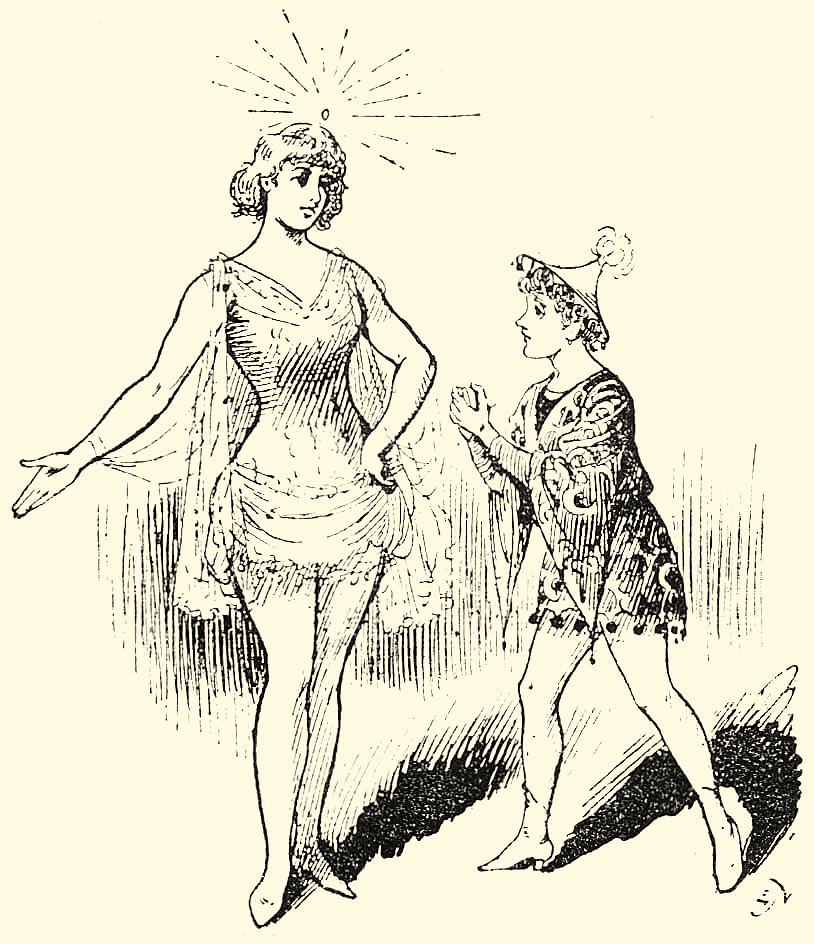 Over the 1885/86 pantomime season Kitty plays Princess Yazora in Sinbad the Sailor at the Marylebone Theatre.  Also appearing is a young clown called Harry Ewins, the son of an omnibus conductor.  By the end of October 1886 Kitty and William appear to have parted and Kitty is known as Mrs Harry Ewins.  She then begins to appear most often south of the river.  In 1887, as a member of the Elephant and Castle Theatre stock company, and in the 1887/88 Christmas season, she plays the Fairy Silverwing, Queen of the Butterflies, in Jack the Giant Killer at the Surrey Theatre.

A rather poignant glimpse of Kitty is when she signed a petition supporting the foundation of an orphanage for the children of actors.  A few months later, on Tuesday the 9th of October 1888, she gave birth to a daughter, Amy Kathleen, at 54 Gurney Street in Elephant and Castle.  When Amy was baptised at St Matthew’s Church in Newington, her parents were described as Henry Ewins, pantomimist, and Madeline Kathleen Ewins.  In fact they did not marry until 1891, which suggests that one of them may have been married already.

Within weeks of giving birth Kitty was back rehearsing for the Surrey Theatre pantomime Ali Baba and the Forty Thieves.  From then on records of her engagements show that work was rather patchy.  Harry was employed in Paris during part of 1889 in Le Prince Soleil at the Théâtre du Châtelet with Charles Lauri’s company.  Perhaps Kitty and Amy went too.  During the early 1890s Kitty appears in short-run sketches in various music halls—the Middlesex, the Alhambra, Gatti’s, and the Royal West London Theatre on the Edgware Road.  Her final engagement was at the Elephant and Castle Theatre.

After Kitty’s death Harry moved north of the river to be near his family: his brothers and nephew mostly worked in the theatre as clowns, stage hands and stage carpenters.  He continued to appear regularly with Charles Lauri’s troupe at home and abroad and in pantomime at the West London Theatre.  In August 1901 Harry died, aged only thirty-nine, leaving Amy an orphan.  His funeral took place at Paddington Cemetery.