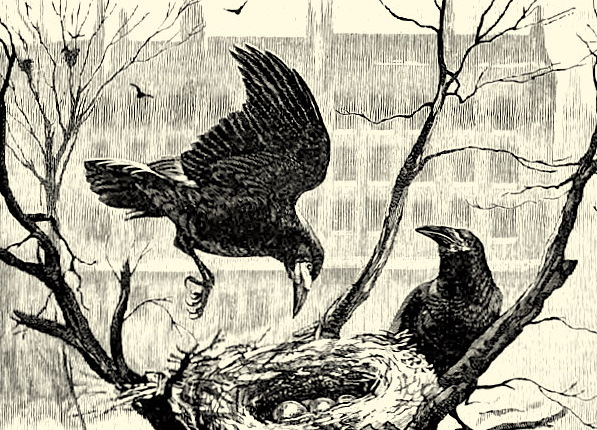 There is a curious link between Charles Dickens and rooks.  Well, perhaps what I should say is that the great writer had a distant association with rooks, for when he was still only fifteen he worked in Gray’s Inn, where there was a famous rookery.  Just to spell this out: Dickens was employed in 1827 as a junior clerk at the firm of Ellis and Blackmore, solicitors of Holborn Court in Gray’s Inn.  Whether he would have seen the rooks that famously colonised the trees in Gray’s Inn Gardens is in fact a moot point, as no one seems to know how long they had been there.  But the sociologist Benjamin Kidd, writing in The English Illustrated Magazine in the 1890s, observed that in the gardens

there still exists in dwindling numbers one of the most ancient colonies of rooks; the nests still hang in the branches of the plane trees and up to the present the birds have always returned in the spring to put them in repair and hatch out their young. 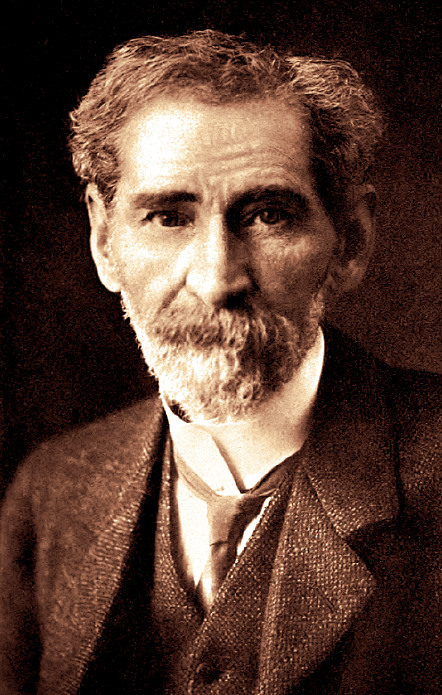 THE FINEST SIGHT
And now a confession.  I am not concerned with Gray’s Inn Gardens but with Kensington Gardens.  Nor for that matter am I concerned with Benjamin Kidd but with William Henry Hudson, who featured a short while ago in my article on the homing pigeon of Hackney Marshes.  Hudson was a writer with a strong interest in natural history in general and ornithology in particular, and in 1898 he published Birds in London, in which he celebrated the winged residents of the capital’s green spaces.  One such green space was Kensington Gardens.  Hudson knew the gardens intimately on account of the fact that he lived in St Luke’s Road in Bayswater, not far from their northern edge.  He had settled there in his early thirties, having emigrated to England from his native Argentina, and he brought to his writing a fine appreciation of his adoptive surroundings.

The day after he arrived in London, which was in 1874, Hudson went out to explore, and, although he had yet to find his bearings, he rambled through Kensington Gardens for three or four hours before chancing upon an area where there were many trees and only a few other people.  Over twenty years later he was able to recall this deeply moving epiphany: 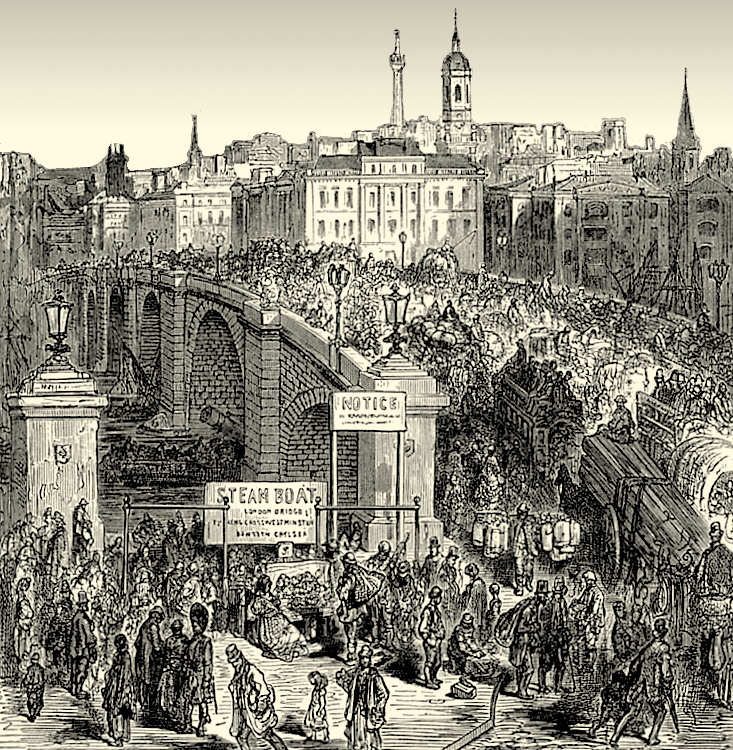 A nightmare vision of a crowded London Bridge.  Image by Gustave Doré in Blanchard Jerrold London: A Pilgrimage (1872) page 11.

It was a wet, cold morning in early May, after a night of incessant rain; but when I reached this unknown place the sun shone out and made the air warm and fragrant and the grass and trees sparkle with innumerable raindrops.  Never grass and trees in their early spring foliage looked so vividly green, while above the sky was clear and blue as if I had left London leagues behind.

As Hudson made his way into this extensive wooded area, the noise of traffic grew fainter and fainter, and a new sound, not so much the clatter of wheels and the shouts of drivers as the raucous caws of innumerable rooks, grew louder and louder:

I was soon under the rookery listening to and watching the birds as they wrangled with one another, and passed in and out among the trees or soared above their tops.  How intensely black they looked amidst the fresh brilliant green of the sunlit foliage!  What wonderfully tall trees were these where the rookery was placed!  It was like a wood where the trees were self-planted, and grew close together in charming disorder, reaching a height of about one hundred feet or more.  Of the fine sights of London so far known to me, including the turbid, rushing Thames, spanned by its vast stone bridges, the cathedral with its sombre cloud-like dome, and the endless hurrying procession of Cheapside, this impressed me the most. 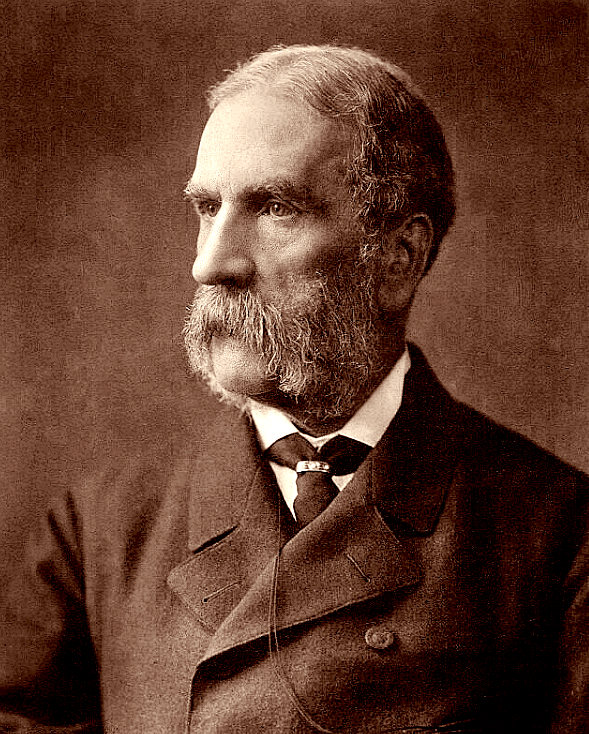 THE GREAT EXECUTION
But writing in 1898 Hudson was compelled to report that the trees in which the birds had formerly nested had been cut down, and that the rookery was no more.  He was both outraged and distressed.  He argued that, whereas the nation had art works and monuments aplenty, its capital city had precious few of the “great trees that give shelter and refreshment to the soul”.  Nor could he understand why the park authorities had committed such an act of desecration.  The trees—seven hundred elms—were healthy.  Although the First Commissioner of Works, William Patrick Adam, was of the opinion that the elms were dying, and had the support of Joseph Hooker and other experts in arboriculture, Hudson disagreed.  He examined the trees after they had been felled, and he found no signs of rot either in the boles or in the roots.

The felling of the elms started in August 1880, and it caused a minor stir in both the London and the provincial newspapers.  The Hampshire Independent criticised the “great execution” that had been ordered by Adam, and the Western Morning News, which was published in Plymouth, quoted a London correspondent as “expecting daily to hear the outcry against his Vandalism”.  They reported the First Commissioner’s claim that the trees were diseased, but it was whispered abroad that this was just a pretext.  The whisper reached Hudson’s ears: 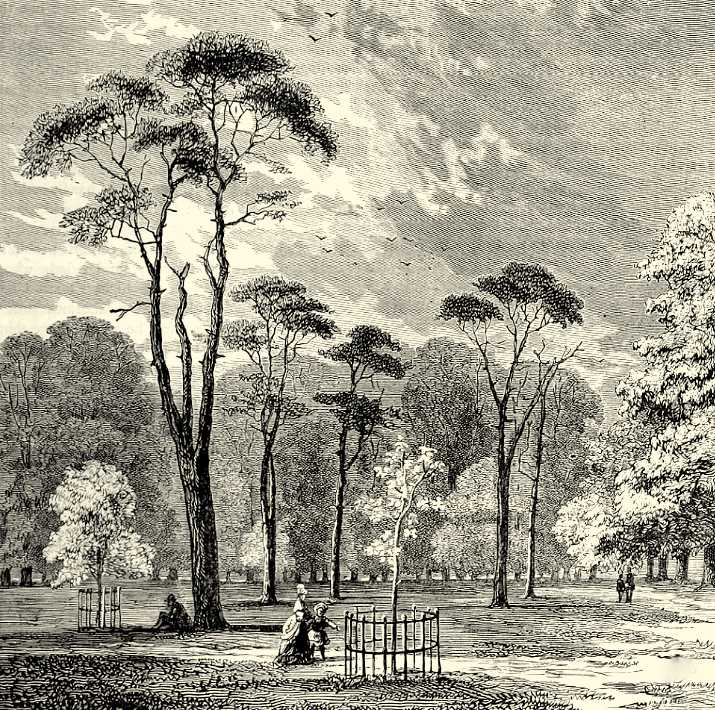 The only reasons I have been able to discover as having been given for the destruction were that grass could not be made to grow so as to form a turf in the deep shade of the grove; that in wet weather, particularly during the fall of the leaf, the ground was always sloppy and dirty under the trees, so that no person could walk in that part of the grounds without soiling his boots.

Obviously he was not impressed, nor, it would seem, were the workmen who were instructed by the park authorities to cut down the elms.  They protested that the trees were things of great beauty.  Furthermore, they acted as a sort of windbreak—a dense mass that protected other trees from the violence of the winds.  And they were right, for in the years following the destruction of the grove many of the finest trees on the north side of the gardens were blown down.

The workmen also lamented the inevitable dissolution of the rookery.  They were scoffed at—the park authorities believed that the birds would build new nests elsewhere in the gardens—but once again their fears were realised.  The rooks never returned, which, for Hudson, settled the matter.  The gardens were of incalculable value to Londoners—“like an amulet or a thrice-precious gem containing mysterious health-giving properties”—and the damage done to them was a great injury inflicted on the whole community.  His assessment of those responsible was written between gritted teeth:  “A worse enemy than the criminal who singles out an individual here and there for attack, and who for his misdeeds is sent to Dartmoor or to the gallows”. 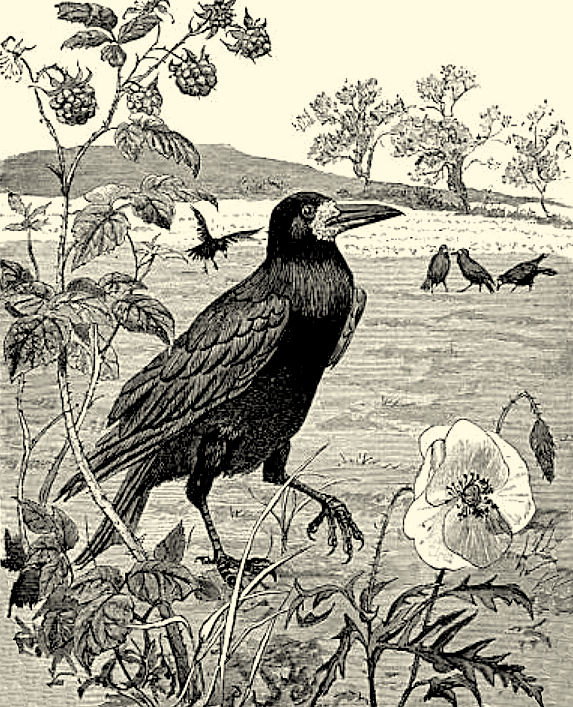 Drawing of a rook by Randolph Caldecott.  Dated 1881.

A FAMILIAR FRIEND
One morning in October, soon after the felling of the elms had started, Hudson was walking in Kensington Gardens in the vacant space, strewn with pieces of bark and yellow splinters, where the grove had once stood.  He watched with interest as an old woman “bent almost double under a ragged shawl full of sticks and brushwood” passed him.  Two small boys, who were skulking nearby, explained that the workmen would allow anyone to take away as much waste wood as they could carry, on payment of a penny.  “My! she’s got a load, ain’t she, Bill?” one of the boys said to his companion, pointing at the old woman.  “Oh, if we had a penny, now!”  Hudson read the two boys like a book.  He gave them their penny, and they ran off to where the workmen were chopping up the fallen elms, whooping with delight.

But there was another person on the scene, watching the little drama:

A carelessly dressed, idle-looking young woman who happened to be standing near just then, regarding us with an expression of slight interest, a slight smile on her rosy lips, the sunshine resting on her beautiful sun-browned face, and tawny bronzed hair.  I must explain that I had met her before, often and often, in London and other towns, and in the country, and by the sea, and in distant seas, and in many uninhabited places, so that we were old friends and quite familiar. 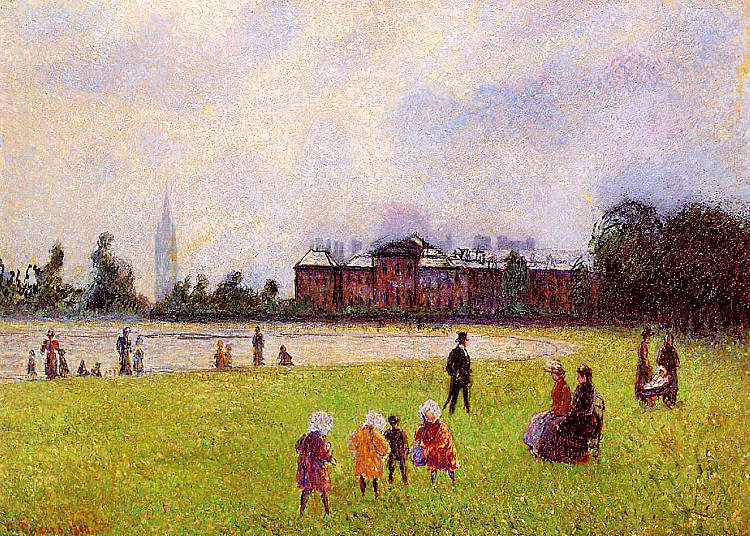 The passage quoted here is as beautiful as it is mysterious, and in its rapturous intensity it equals any of Hudson’s descriptions of the natural world.  But it is pointless to wonder who the young woman might have been, for she did not truly exist, at least not in any flesh-and-blood sense.  Not that was she merely a figment of Hudson’s imagination: she was something very much more powerful, very much more present, as it were.  She was the embodiment of an idea—of Nature, perhaps, or Natural Beauty—and to Hudson, whose profound response to the world around him was an almost mystical experience, she was undeniable, and real. 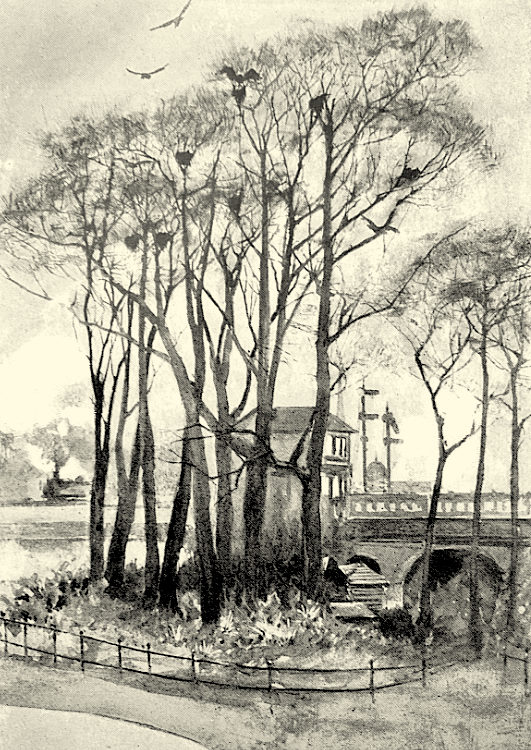 A rookery in Brockwell Park.  Image by Arthur David McCormick in William Henry Hudson Birds in London (1898) between pages 234 and 235.

Hudson turned to leave the gardens, and as he did so he exchanged glances with the young woman.  Hers was both sorrowful and comforting, a gentle assurance that “these hackings and mutilations of the sweet places of the earth” were not some sort of permanent loss, not some sort of end.  For a time would surely come when this site of utilitarian vandalism would once again be overgrown with trees and populated with animals and birds.  That time would surely come

after this London, after the dust of all her people, from park ranger to bowed-down withered old woman gathering rotten rain-sodden sticks for fuel, had been blown about by the winds of many centuries.