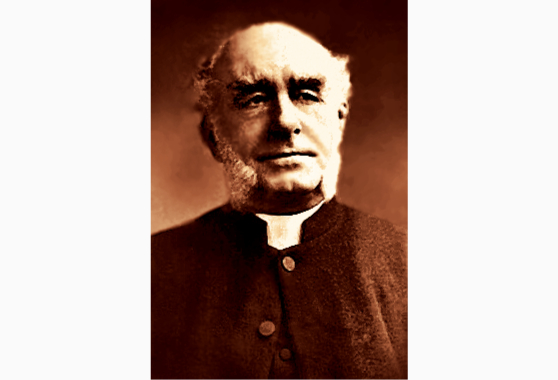 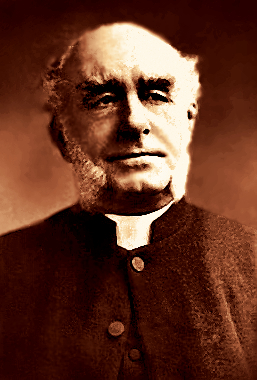 In the year 1883 a large detached house on the north side of Wandsworth Common was occupied by the Kellys.  They were a family of four, and prosperous enough to have two domestic servants.  Charles Henry Kelly, originally from Salford in what was then Lancashire, was forty-nine years old.  His wife Eleanor, who came from Sheffield, was forty-one.  With them lived their two sons, Arthur Henry and Charles Ernest, aged fourteen and twelve respectively, and both at school.

Charles Henry Kelly was every inch the middle-class Victorian.  He was also a minister in the Wesleyan Methodist Church, and a photograph taken in old age shows him in a plain coat with a clerical collar.  His confident smile suggests a man who has lived his live free of cares.  That, though, was not the case, as the following strange and disturbing story will show.

THE WANDSWORTH CIRCUIT
To set the scene for the Reverend Kelly’s story, we need to take a quick look at his life and his work.  Although he started out as a clerk in Manchester, he soon changed direction, and by the time he was in his early twenties he had trained for the ministry.  In due course he came south, and in his mid-thirties he was appointed to the Chelsea Circuit as an itinerant preacher.  Further circuit appointments followed, first in Wandsworth, and later in Westminster.

As part of his work on the Wandsworth Circuit, Kelly took over management of the boys’ reformatory school in Spanish Road.  The school had a hundred and eighty residents who had been convicted in the courts, mostly for theft or troublemaking, and given reformatory sentences of between two and five years.

Kelly maintained that removing young offenders from “vicious associations”, and allowing them to develop good characters, was preferable to the “penal machinery of the State”.  He was proud of the fact that many of these boys enlisted, many emigrated and a good number found trades.  He listened sympathetically to stories of broken lives, and he would occasionally petition the Home Secretary for clemency towards school leavers who had ended up in prison.  In later life he remembered two boys who had died at the school, saddened that one had looked on him as the only real friend he had ever known, happy that the other had been reconciled with an estranged brother in the hours before his death.

VOICES OF THE UNSEEN
These anecdotes certainly suggest that Kelly looked for the good in all people—not that he always found it—and that he believed in the value of helping those who deserved to be helped.  One wonders if he considered that he himself was deserving of help.  Maybe yes, maybe no.  But on one particular occasion—and it is at this point that the story proper begins—he was so very fortunate that he might reasonably have reckoned that he had earned at least some divine protection.

In February of the year in question—1883—Kelly was appointed to visit the Channel Islands.  He was to preach in Jersey on Sunday the 4th, and to address meetings there on Monday the 5th and in Guernsey on Wednesday the 7th.  His plan was to cross over from Southampton on the Friday before the first of the Jersey appointments, and, as the ferry was scheduled to leave at midnight, he decided to travel down from Waterloo on the night train.

But on the day of his planned departure he began to feel uneasy.  In his memoirs he described the feeling as a presentiment of danger, as if “voices of the unseen” were warning him not to go to Jersey and Guernsey.  And he was further unsettled when a telegram arrived that afternoon from a sister-in-law in Torquay, who was urging him not to make the crossing.

Kelly had every reason to take these disturbing experiences seriously.  One Sunday in the autumn of 1854 he had been preaching at Rixton in Lancashire, now Rixton-with-Glazebrook in Cheshire.  Walking home with a friend, John Hardey, he described a strange dream in which he had seen a boy he had been at school with, who at eighteen was two years his junior.  The boy was called John Stirling, and he appeared to be lying on the ground dead.  And Kelly knew that the young man must indeed be dead, though he did not know how he had died. 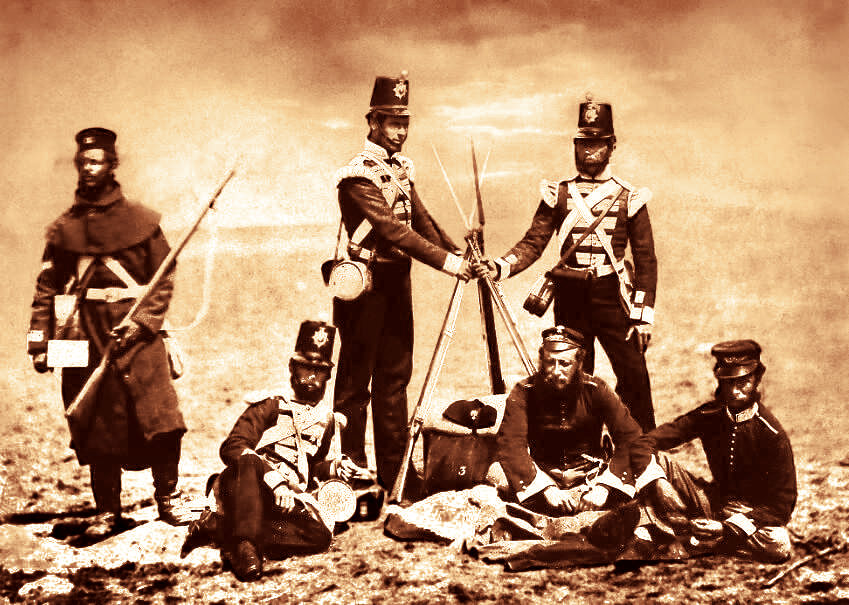 A while later he read an announcement in The Manchester Guardian that made his blood freeze.  All the talk in the newspapers in 1854 was of course of the Crimean War, and reports of the Battle of Inkerman were now emerging.  As it happened, Kelly’s conversation with Hardey about his dream had taken place on the same day as the battle, that is to say on the 5th of November.  And now in the Guardian he read for the first time that Lieutenant John Stirling of the 41st Foot—“holding the colours of his regiment”—had fallen at Inkerman.

BUT WAS IT THE RIGHT DECISION?
Kelly had been devoted to Stirling, and there is a poignant reference in his memoirs to a letter, its paper now faded, that his young friend had sent from Scotland.  But even when weighed down with life’s sadnesses he derived great comfort from what he called “unseen presences”.  He was convinced that communion with the departed was a preparation for his own death, an assurance that heaven would be “a place of familiar sights, familiar music, familiar faces”.  And although he did not regard himself as in any sense psychic, he was enough of a believer in the supernatural to pay serious attention to experiences—premonitions, anticipations, warnings—that were in any ordinary way inexplicable.

And so it was with mixed feelings that he prepared to board the Southampton train at Waterloo Station on the evening of the 2nd of February.  He had decided not to set so much store by the warnings as to cancel his journey to the Channel Islands, but as he walked to the far end of the platform and back he felt unsettled again.  He could not quite put his finger on it: the train simply did not look right.  He wrote two notes of apology, which the guard promised to hand to the steward of the ferry to be delivered to his hosts in Jersey and Guernsey.  That done, he returned to Wandsworth, and we may well imagine that he wondered on the journey home if he had made the right decision after all. 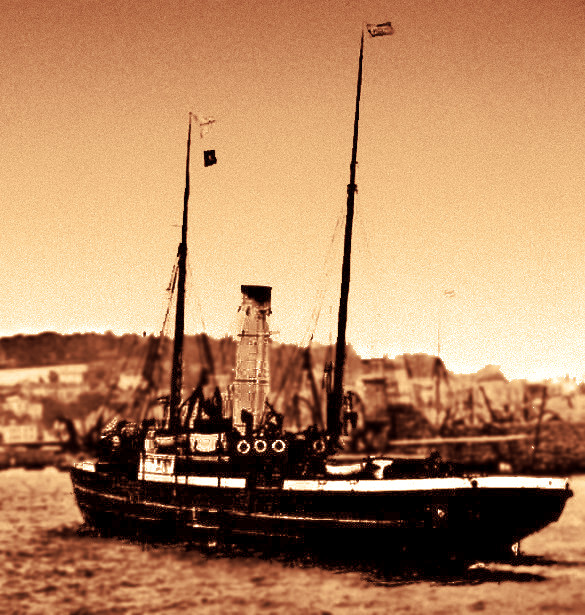 The SS Hilda was launched in July 1882, and remained in service until November 1905, when she was wrecked a few miles out of St Malo with the loss of one hundred and twenty-five lives.

OFF THE NEEDLES
When the train from Waterloo pulled into Southampton Docks, the passengers boarded the SS Hilda, a mail service steamship owned by the London and South Western Railway.  At midnight the Hilda, under the command of a Captain Merrells, headed out into the Solent, steaming down to the Yarmouth Roads off the Isle of Wight on her way westward to the Needles.

And there the Hilda, all eight hundred and twenty-one tons of her, ran stem on into a French fishing boat.  A terrible gale had been blowing all that day, and the boat, a lugger, had run up through the Needles to find shelter.  Now, on impact with the steamship, she sank immediately, with all hands going down with her.  Captain Merrells, witnessing the disaster from the bridge of the Hilda, ordered a boat out in the hope of saving lives, and immediately the second and third officers, with two seamen and a steward, set off into the dark.  They were soon lost to view, and when they failed to return Merrells began to fear that they had succumbed to the remnants of the gale.  Then, having no choice, he returned to Southampton, where he shipped some men to replace those in the boat, who were now assumed to have drowned, and set out again for the Channel Islands.

Meanwhile a tug, the Fawn, had been chartered by the marine superintendent of the London and South Western Railway to search the scene of the collision.  The crew found some wreckage—a table that had been pitched into the sea when the lugger was sliced through by the steamship—but nothing by which the stricken vessel might be identified.  However, the men who had set out from the Hilda in the rescue boat were found to be alive after all, having drifted on the wind and landed about two miles east of Yarmouth.  Now they boarded the Fawn, and, when the Hilda passed down the Roads on her second journey out, they changed places with the emergency crew, who returned with the tug to Southampton. 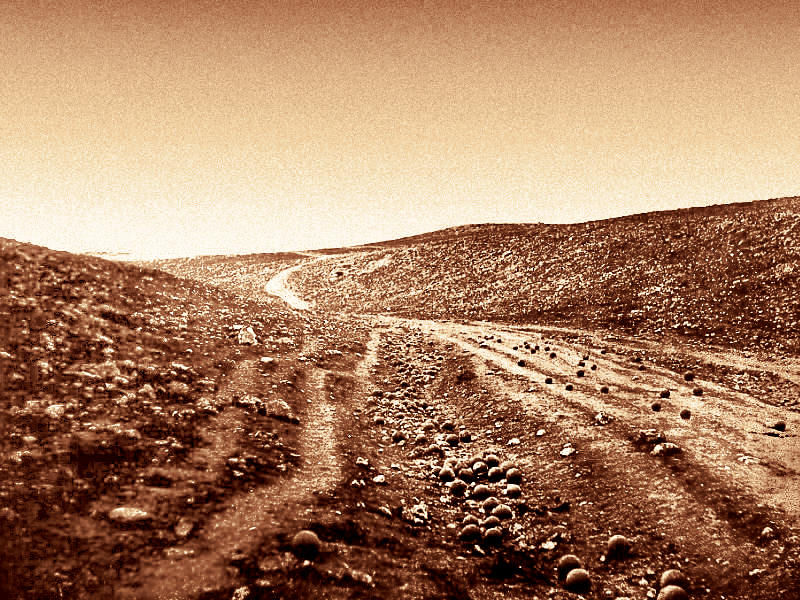 Shadow of the Valley of Death photographed by Roger Fenton in 1855.  The ground in this Crimean War landscape is littered with cannonballs.

OH IF ONLY
Some time later Kelly received a letter from an acquaintance in Guernsey who questioned his decision not to travel on that fateful night.  What would be thought of a general, his correspondent asked, who ordered his troops to turn back on the eve of battle?  Kelly replied that only a fool would think that the general should have risked his life and the lives of his men.  “A wise man,” he continued, “would remember that a battle is not a campaign, and he might avoid one that he might live to fight many more”.

The irony, of course, is that Kelly would have survived the disaster along with all the passengers and crew of the Hilda, which had returned to Southampton without loss of life.  In a way his premonitions were wasted on him.  How much better if the poor wretches on the French lugger had been warned off the sea.  If they had been as prescient as Charles Henry Kelly, they might have been on the lookout for steamships looming out of the darkness of a winter’s night.  And how much better if young John Stirling had been gifted with his former schoolfellow’s foresight, for then he might have kept clear of the bullet or the cannonball that laid him low on the rain-swept field of Inkerman.