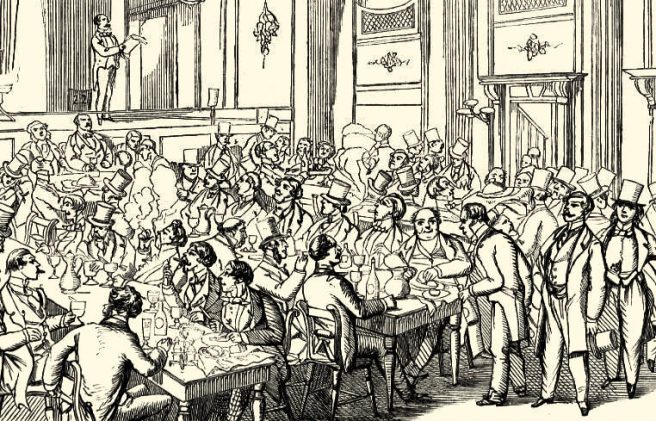 View of Marine Parade in Margate in Regency times.  Image in Margate Delineated (1829) between pages 38 and 39.

In September 1832 a group of London friends decided to spend a few days in Margate.  They were variously gentlemen and tradesmen, all living in the Manchester Square area of Marylebone.  On a cloudy but mild Monday morning they went down to the steam packet wharf just below London Bridge in Lower Thames Street in time to catch the William the Fourth, which chugged down the river daily, leaving at ten in the morning.  By the end of the journey, which lasted about five hours, they were finding it hard to contain their high spirits, and they started calling out to the on-board entertainers to give ’em a song.  Then, on reaching Margate, they dived into a tavern.  During the meal one of the men, a pawnbroker named Jones, put his hand into the pocket of his breeches, only to discover that his purse, with twelve sovereigns, was missing.  His companions immediately checked their own purses.  Every man Jack of them had been robbed. 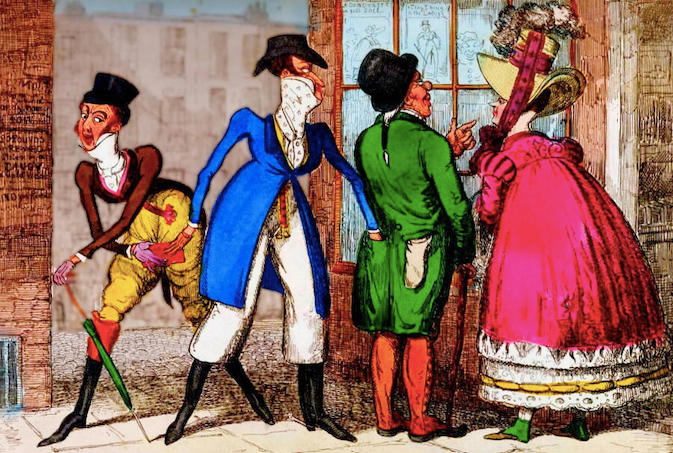 The “swell mobs” were pickpockets who dressed smartly in order to avoid suspicion.  Illustration of two dandy thieves “diving” by Isaac Robert Cruikshank in The Caricature Magazine volume 5 (1818) folio 75.

In due course the irate Londoners, who had lost about £96 in total, were informed by the local constabulary that a “swell mob” had been operating on the steamer.  Talking about the incident, they decided that the outrage had been perpetrated while they had been listening to one of the entertainers.  He had so distracted them that they had not noticed hands slipping into their pockets.

Which brings us to our principal theme.  For the entertainer on board the William the Fourth on that fateful Monday in 1832 was none other than the celebrated “German siffleur”—a “siffleur” being a whistler—David von Joel.

WHISTLING AND OTHER TRICKS
Von Joel’s talents as a whistler were unrivalled.  He could hold a walking-stick to his mouth and “play” it like a flute, giving a passable rendition of “Das klinget so herrlich” from Die Zauberflöte.  He could imitate a bugle, or a bassoon, or a French horn.  He was a past master at reproducing the song of the canary and the bullfinch, the blackbird and the thrush, the lark ascending and descending, the nightingale and the peacock.  He could whistle the noises of the farmyard—cows and geese and turkeys—and the squeak of the guinea pig.  As a consummate professional he never descended to the deception practised by an Italian rival, a specialist in porcine performances, who was found to have a real pig concealed in his clothing.

Von Joel sang German and Swiss songs, passed himself off as the soprano Margarethe Stockhausen, and yodelled.  Sometimes he performed in lederhosen.  Sometimes he was accompanied by the harp or the piano or the guitar.  He was burly and good-humoured, with a heavy German accent that he never quite shook off.  Commentators jotted down his characteristic enunciations—“vokingshteeck”, “trosh”, “plackbird”, “nachtingall”—with obvious delight.

HAMBURG AND ENGLAND
David von Joel had been born in Hamburg in 1785, and the story goes that for the first seven years of his life he was deaf, and without speech.  Then one day, as he was watching a military review, the report from a nearby canon activated his two latent senses.  The first sounds he heard on returning home were those of animals, an encounter that gave him his extraordinary gift of imitation. 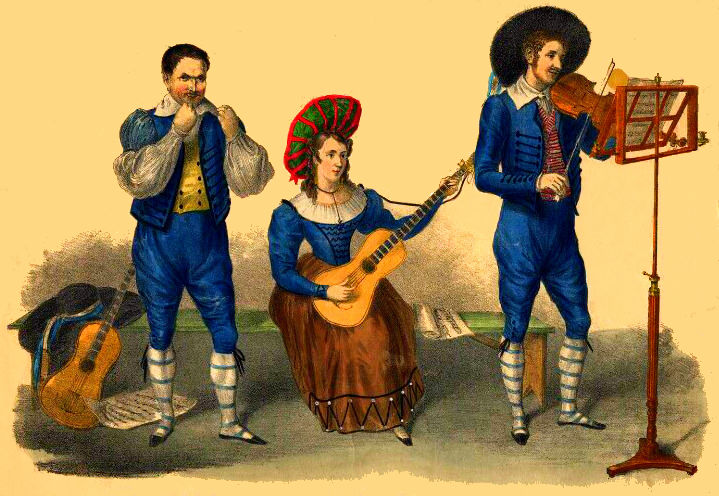 The “chin chopper” or “chin melodist” Michel (Michael) Boai portrayed with his wife and a violinist by the name of Engels.  Lithograph dated c.1830s.  © National Portrait Gallery

In 1829, when he was already in his forties, von Joel appeared in London for the first time.  His debut was at the Sans Souci Theatre off Leicester Square, following which he was engaged to perform at the Surrey Theatre in Southwark, the Theatre Royal in Covent Garden, and the pleasure gardens in Vauxhall.  His fellow acts at these venues included the likes of Charles Sloman, who used his terrible singing voice to improvise comic songs on themes suggested by the audience, and Michael Boai, who rapped out tunes on his chin with his knuckles.  He entertained the crowds at the Surrey Zoological Gardens with what were billed as his “zoological imitations”, and he toured extensively, visiting Scotland and Ireland as well as English provincial towns and cities.  He was even employed by a learned gentleman, William Jones, F.R.C.S., to “illustrate” lectures on the human and animal voice. 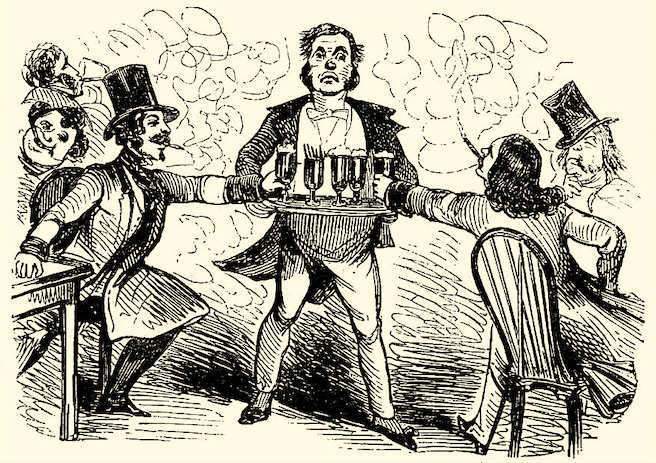 A less exalted outlet for von Joel’s peculiar gifts was the variety programme at tavern saloons such as Howard’s in Swallow Street, the Horse & Dolphin in Macclesfield Street, the Grapes in Compton Street and the Hope in Blackmore Street.  Above all, he was associated with Evans’s Supper Rooms in Covent Garden, a sort of raffish gentleman’s club where a mixed crowd went when the theatres had shut for the night.  The journals of the day had a decidedly snobbish attitude to Evans’s patrons.  The aristocrat who had once frequented its rowdy and smoke-filled subterranean spaces had been elbowed out by the social climber, the “Gent” satirised by Punch as happy to talk about dogs and horses but otherwise “as silent as a pickled salmon”.  The serving of food and drink was pleasantly chaotic, and the bills fairly creative.  And here the German siffleur sang and whistled, and, between numbers, walked from table to table with a tumbler of threepenny Havannah cigars.  He was known to one and all, even to the bohemian literati—Thackeray and Dickens among them—who patronised the supper-rooms.

THE FINAL WHISTLE
Nothing remains the same forever, though, and, when Evans’s changed hands in 1844, the premises were enlarged and refurbished and the tone of entertainment was raised.  But von Joel was kept on, in recognition, it was suggested, of his loyalty to the establishment over the years.  Then, as the years passed, his music began to fail him.  “The thorax is rusty”, wrote the journalist George Augustus Sala, not unkindly, “and the larynx no longer supple”.  Even so, the old retainer could still croak out “Auld Lang Syne” on demand, and, of course, he could still sell cigars.  He cut a rather sorry figure, shuffling round in a shabby alpaca coat, his shirt collar and wristbands conspicuously dirty.  Sala felt the pathos, but could not resist poking fun.  “One would shudder to think of Wellington’s old charger, Copenhagen, being sent to Cow Cross”—the knackers’ yard in Farringdon—“instead of ending his days peacefully in a paddock”.

Von Joel died in in July 1865 at the age of eighty-one—a long life indeed.  His passing was noted here and there.  In a very brief obituary that kept just the right side of irony The Sporting Life wrote that “the cheery jödle gives place to a burial service” and “the Babel of ‘the farm-yard’ to the silence of the grave”.  Charles Sloman, a friend from the time of his arrival in England, wondered if von Joel had known for a while that he was going to die, and if this was why he had presented him with his black suit and badge—he was a Mason—asking him to accept them as he would “never want them again”. 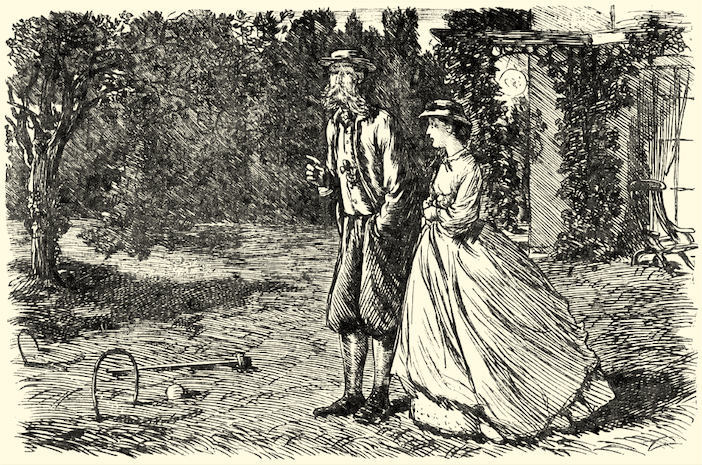 She: “It’s that darling nightingale; how full of tender melancholy are its delicious warbl— ” He: “Uncommonly like Herr von Joel—to be sure!”  Image in Punch volume 46 (1864) page 196.

PUNCHING BELOW THE BELT
Von Joel enjoyed a dubious celebrity, and his contemporaries were often supercilious in their treatment of him.  A humorous novel of 1847 has a rather unworldly Mr Ledbury wondering if he is related to Prince Albert, the point of the joke no doubt residing in the misattribution of royal pedigree to a popular entertainer.  The note of mockery is even clearer in Punch, in, for example, the satirical reporting of a social engagement between von Joel’s wife and the wife of the proprietor of Evans’s.  There are many other examples in a similar vein, and one cannot help wondering if the sniffy attitude of Punch, and of the literary establishment generally, owes at least something to ninenteenth-century antisemitism.  The journalist James Ewing Ritchie, the son of a Church of England cleric, saw nothing amiss in referring to von Joel as “that little Hebrew”.  His dismissiveness has a dark and sinister undertone.

Frau von Joel, incidentally, also came from Hamburg.  Her name was Rachel, and she was about ten years younger than David.  In the censuses the von Joels are living behind Leicester Square in Lisle Street, off Red Lion Square in Fisher Street, and then round the corner in Kingsgate Street.  They had three sons and two daughters, and the oldest son, Joseph, followed his father into the entertainment business.  He was a pianist, and his name appears alongside von Joel’s in publicity notices at least as early as 1847, when he was barely in his teens.  Later we find him performing piano solos from the classical repertoire, and even selling his own compositions, an example with a particularly beguiling title being “Wanderings at Morn”, priced three shillings.  An advertisement in The Illustrated London News described the piece as “replete with melody and effect”, and, encouragingly, “within the reach of ordinary performers”.  One wonders if the melody was whistled as well as played. 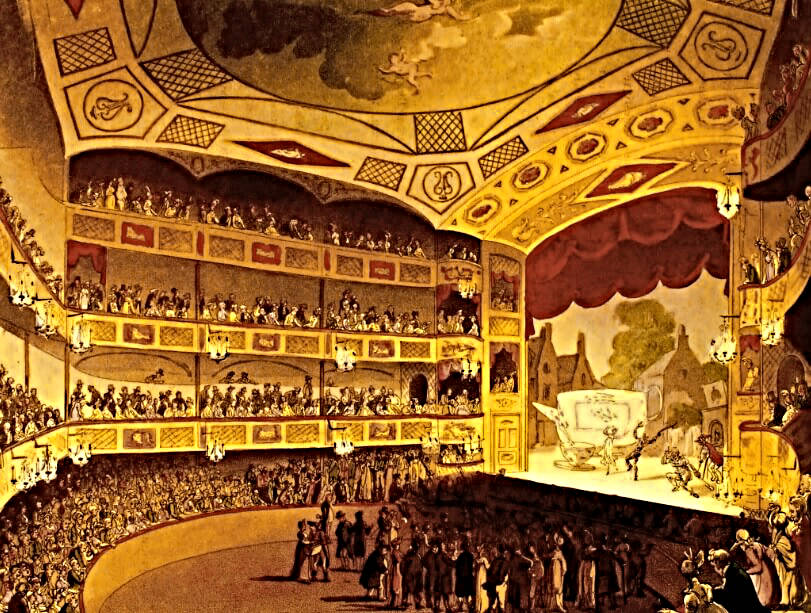 COMING FULL CIRCLE
But we end, as we began, in Marylebone.  On the night of 3rd December 1839 three young men were arrested by a Sergeant Todd in the New—now Euston—Road.  They were singing raucously at the top of their voices, causing a disturbance.  When the case came before the magistrate, the sergeant explained that the prisoners had spent the evening at the Surrey Theatre—a long way from Marylebone!—and were belting out some of the numbers as they made their way home.  The magistrate, clearly not a patron of minor theatre, wanted to know more. “Then I must refer you,” said Todd, “to the work of the German vocalist, Herr von Joel.”

What finer tribute could there be to an entertainer’s influence than that he landed three men in court?  These particular chaps, incidentally, having shown due remorse, were let off with a caution.

SOURCES
My research into the life and career of David von Joel was carried out principally in contemporary newspapers and journals.  Theatrical and other memoirs were another valuable source of information.