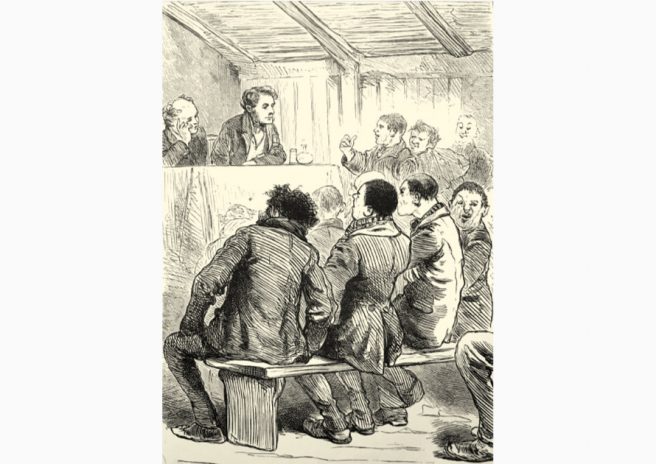 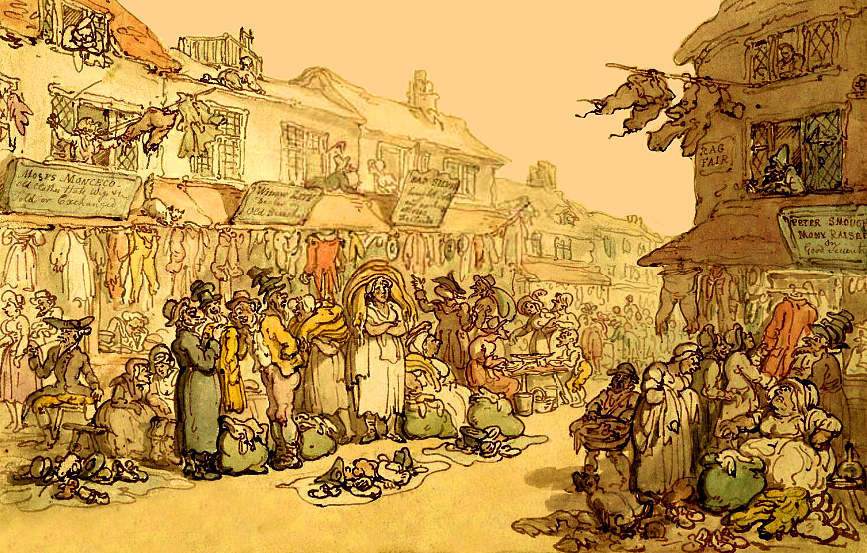 Rag Fair in Rosemary Lane in about 1800 by Thomas Rowlandson.  © British Museum

On the evening of the 27th of July 1848—a Thursday—a remarkable meeting took place in one of the less hospitable corners of the capital.  The venue was in Darby Street in Whitechapel, in a house that by day served as a Ragged School for the local Irish population.  And those attending the meeting were just about as extraordinary a group of individuals as one could possibly hope to encounter.

Darby Street dropped down from Rosemary Lane, which ran west to east from behind the Tower, passing the Royal Mint before plunging into the areas around the docks.  Only streets away the river emptied its workforce of dredgers and watermen, ballast-heavers and coal-whippers into dismal lodgings.  Here they rubbed shoulders with the slop-workers and sweaters from the Minories.  The journalist Henry Mayhew gave a vivid account of the second-hand trade which was the mainstay of the Rosemary Lane economy, and which was conducted on pavements heaped with old shoes and clothes, old hats and umbrellas, and old cutlery and glass.  The buyers and sellers bargained and wrangled, smoking and eating, sipping tea and coffee, and swigging beer.  Everywhere young thieves ran around with no shoes on the their feet and no shirts on their backs.

Mayhew commented that the side streets and back streets were “poorer in all respects” than Rosemary Lane itself.  Even on a map—Cross’s 1844 London Guide, for example, or his 1850 New Plan—Darby Street looked menacing.  Walking down from Rosemary Lane you came to a dead end, which forced you into the parallel Street, Cartwright Street, through communicating alleys.  There can have been few parts of London less inviting to the outsider, to the casual and innocent visitor, than Darby Street in Whitechapel. 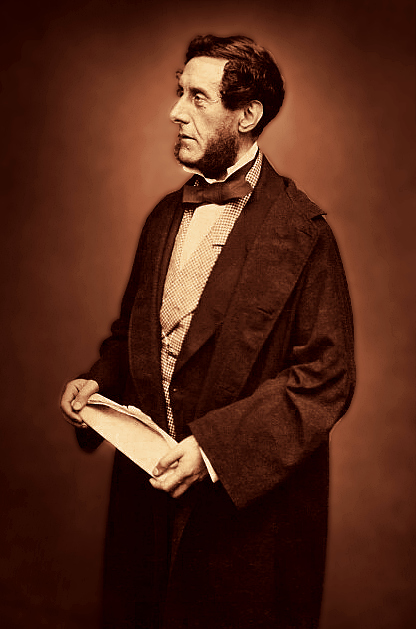 MR JACKSON!  MR JACKSON!
As has already been said, the meeting in the Ragged School was remarkable.  The delegates—several hundred in number—were drawn from the capital’s criminal population.  The two gentlemen running the meeting could hardly have been more different.  One was a city missionary by the name of Thomas Lupton Jackson.  The other was Lord Ashley, the 7th Earl of Shaftesbury.

Ashley was a committed social reformer.  In 1846 he had visited the capital’s lodging-houses, taking two companions with him.  One was Charles James Berridge Aldis, a distinguished doctor who, like Ashley, was deeply concerned about overcrowding in slum dwellings.  The other was Jackson, whose devotion to his work in the terrible squalor of the East End he greatly admired.  He remembered Jackson once walking through his “patch” and being targeted by a young pickpocket, who knew him well but failed to recognise him, as he was wearing a new coat.  The boy darted off, but at the end of the street he stopped.  “I didn’t know you in your new coat,” he said, running back to Jackson.  “Here’s your handkerchief for you!”

THE HAUNTS OF CRIMINALS
Thomas Lupton Jackson was born in 1807 in Manchester to Catholic parents.  He was only nine when his alcoholic father died.  His mother remarried, but he fell out with his stepfather, who was a cruel man.  He preferred the company of Sunday school evangelists, and by the time he was in his early thirties he was evangelising in London, where in the winter of 1839 he was appointed to the City Mission, and was assigned Goodman’s Fields as his district.  By then the first two of his many children had already been born. 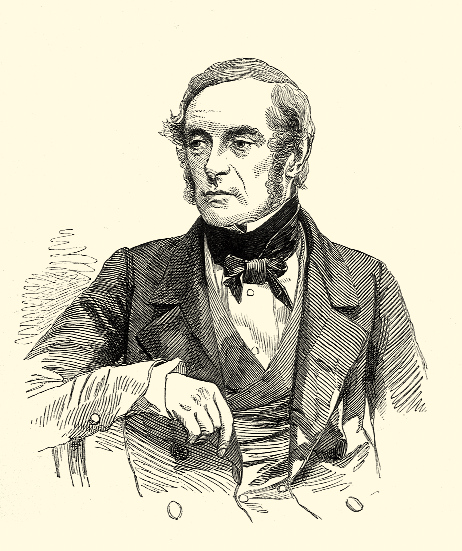 Charles James Berridge Aldis.  Wood engraving after a daguerrotype by Antoine Claudet in Biographical Memoirs of Sir Charles Aldis and Dr Aldis (1852) between pages 22 and 23.

In Goodman’s Fields, which stood a few blocks north of Rosemary Lane, he laboured tirelessly, holding meetings, circulating tracts and religious books, and visiting unfortunates on the very margins of society in workhouses and lodging houses, in prisons and in the streets.  He was tall and strong, and he was blessed with a kindly expression, and with a smile that broke down barriers.

Often at great personal risk he would go down into the haunts of criminals, the dark corners and hang-outs where the police were reluctant to show their faces.  He became a familiar figure in a sort of subterranean world of discharged and penitent thieves looking for a way out of a thankless life of crime.  He was known, and he was trusted.

FINDING A WAY OUT
Accordingly, on that summer’s evening in 1848, the school in Darby Street filled up with members of the criminal fraternity.  The door was manned by a number of prominent underworld characters, who closely questioned the credentials of anyone they did not immediately recognise.  Then, before the meeting started in earnest, an order was announced, that everyone should look around the room to see if their suspicions were aroused.  The precaution was readily appreciated by all those who were in danger of being arrested.  They would not want to be grassed up to the police.  They would want to feel that they could speak their minds without fear of snitches and narks. 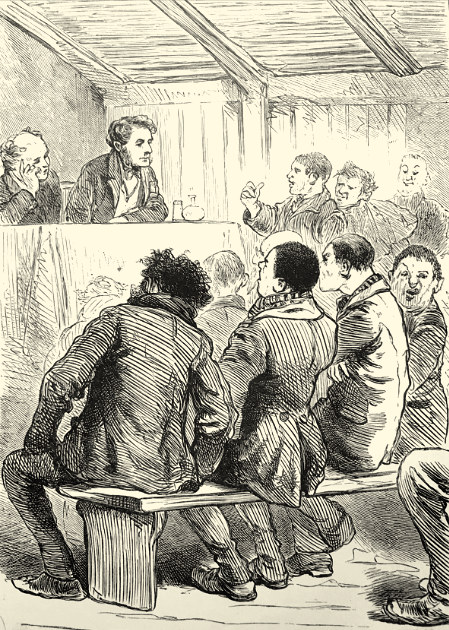 Meeting the thieves in the Ragged School in Darby Street.  The figure at the far left is Thomas Lupton Jackson.  Next to Jackson is Lord Shaftesbury.  Image in John Matthias Weylland These Fifty Years (1884) between pages 154 and 155.

Jackson, rising to speak, reeled off some impressive statistics.  He had convened audiences of criminals on three occasions in recent weeks.  Taken together these meetings had had a total audience of almost four hundred individuals.  All had been sent to prison at some point for theft.  Getting on for a hundred had been sent to prison more than once—some as many as twenty-seven times—and two of them so often that they had lost count.  At the third of the three meetings half of the criminals present were sleeping in workhouses.  In their view it was the casual wards—the “spikes” where vagrants were offered a night’s shelter in exchange for a morning’s work—that had proved to be their undoing.  Jackson had met many young men and women who made the same complaint.  “I wish I had never known a casual ward,” they would say.  “For, before I knew it, I was right, but now I am ruined.”  According to Jackson the casual ward was “a nursery for crime” in which inmates were trained, as it were, to undergo imprisonment.

If these men saw themselves as trapped in a life of crime, Jackson suggested that the way out was emigration.  When his audience objected that they did not have the means to emigrate, he turned to Shaftesbury, asking him to petition the government to grant them free passage to the colonies.  Shaftesbury acceded on condition that the men abstain from crime, a course of action only made possible by a voluntary subscription, to be raised by the organisers of the scheme.  Fifty-eight pounds were raised, and not long after twelve men were despatched to America.  In due course nearly three hundred emigrated or turned their backs on crime. 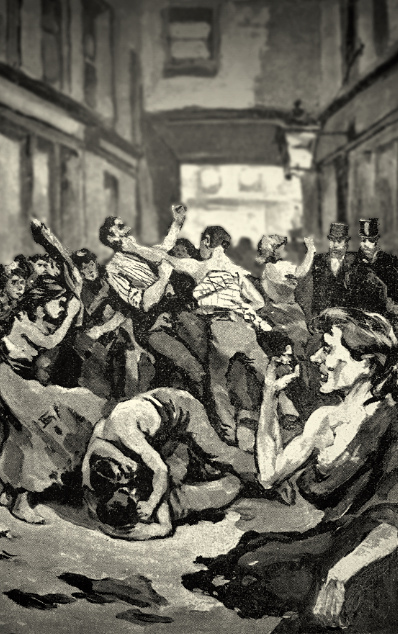 The rough and tumble of life in a Rag Fair court.  Image in John Hunt Pioneer Work in the Great City (1895) between pages 46 and 47.

UNDER ATTACK
But what probably strikes us as the work of good men was not universally appreciated.  For a few weeks later Jackson found himself in court—Worship Street in Shoreditch—at the receiving end of a complaint.  The complainants were two sisters-in-law, Anne and Emma Lohfink, whose husbands had recently left for America.

Anne Lohfink explained that at the meeting in Darby Street her husband had been promised free passage to New York.  However, as the day of departure approached, it became apparent that he was to go alone, leaving his wife and child to face the grim prospect of the workhouse.  Emma Lohfink had been similarly abandoned, with the difference that her husband had not even told her that he was going to emigrate.  He had gone out one morning but had not come back in the evening.  He too had a child.

The magistrate immediately summoned Jackson, who on listening to the charges claimed that he had been deceived by the Lohfink brothers.  One had given him his assurance that he would bring his family over to America at his own expense, whilst the other had kept it very quiet that he was married.  Both had plausible accounts of their criminal past, but these, it emerged, were ploys to dupe Jackson and Shaftesbury.

Although the court helped the two destitute women with a few shillings from the poor box, the embarrassment to Jackson did not end there.  The newspapers had picked up the story, gleefully slamming the city missionary as a naive do-gooder who had contrived to break up families.  Concerned to clear his name Jackson returned to Worship Street, where he undertook to pay for Anne and Emma Lohfink to travel to New York.  A week later he found himself answering a fresh complaint that his promise of free passage—which it was claimed he had threatened to withdraw if his name was further dragged through the mud—did nothing to relieve the women’s immediate distress.

Jackson insisted that Anne and Emma Lohfink had not accurately reported the full extent of the assistance he had offered.  But the damage had been done, and such gestures as reimbursing the court for the sums paid out from the poor box did not spare him unwelcome publicity.  The newspapers accused him of rewarding antisocial behaviour, and of exporting domestic problems to other countries.  In reality he was being attacked not only for his clumsy reforming zeal but also for his persistent evangelising, a feature of city missionary practice which many commentators, Dickens included, regarded with distaste.  And there was the unexpressed fear that women deserted by their husbands would turn to prostitution in order to survive. 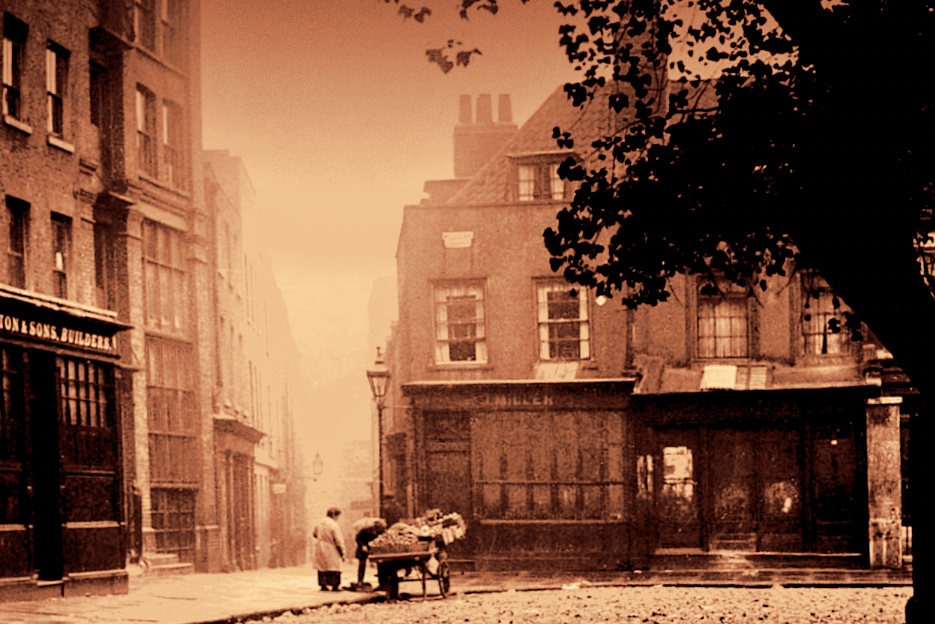 GONE OUR TRUE FRIEND
Thomas Lupton Jackson had his critics, and they would probably have smiled, smugly, if they had known then that in 1855 he would be robbed by a convict, who at the time was out on parole.  But the fact remains that he went in person into the dens of thieves when men with lofty principles stayed safely at home.

He died in 1883 at the age of seventy-six.  His burial in Abney Park Cemetery was a moving display of the respect many held him in.  The hearse was followed by over a hundred city missionaries joined by police officers of the Whitechapel Division, who, uniformed for the occasion, had carried the coffin from the dead man’s home at 41 Wellclose Square.  An obituarist noted that

many Christian friends and many of the poor crowded the cemetery, among whom were mingled not a few of the depraved classes, all lamenting the loss of a true friend.

A few years later a monument of sorts was established when no. 41 was adapted as the London Wesleyan East End Mission Hall.  No edifice of finely carved costly marble, the Hall, like the man himself, was simple and solid, a repository of unadorned decency in a part of London so often overlooked.