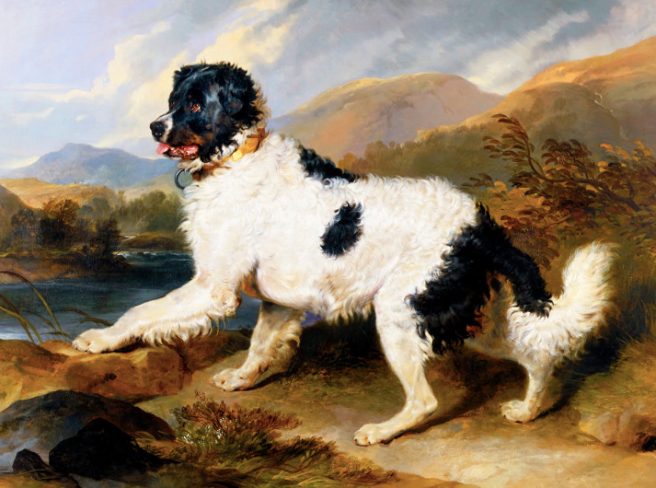 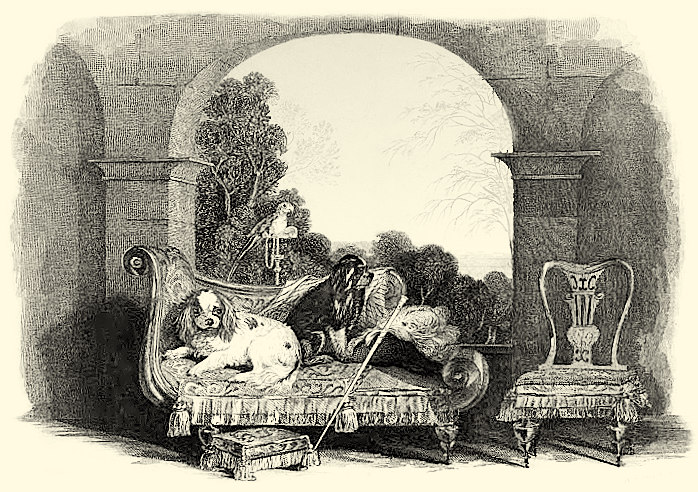 You may recall a recent post of mine concerning a missionary and his dog.  Well, here is another little story in which the protagonist is once again a dog of quite extraordinary character.  The source of the story is the quaint collection of anecdotes put together by Edward Jesse, for whom see the same earlier post.  Although he had many fine qualities as a writer, Jesse was a stranger to the footnote and the citation, and for this reason it is impossible to date the story with anything approaching accuracy.  However, you will agree before long that it has a nineteenth-century ring to it.

One reason why I like the story is that it reminds me of poor old Argos.  You will remember that Argos was the hunting-dog who stayed behind in Ithaca when Odysseus went off to fight in Troy.  Returning home some twenty years later, Odysseus came across poor Argos, now a shadow of his former self, flea-bitten and wallowing in a heap of farmyard dung.  Odysseus was disguised as a beggar—no room to explain that storyline here—but the old dog recognised him.  The battered warrior shed a tear, and went on his way, whereupon the contented Argos immediately died.  He had been possessed of a true nobility, and we are invited by the poet—Homer—to reflect on the nature of friendship, and of loyalty even unto death. 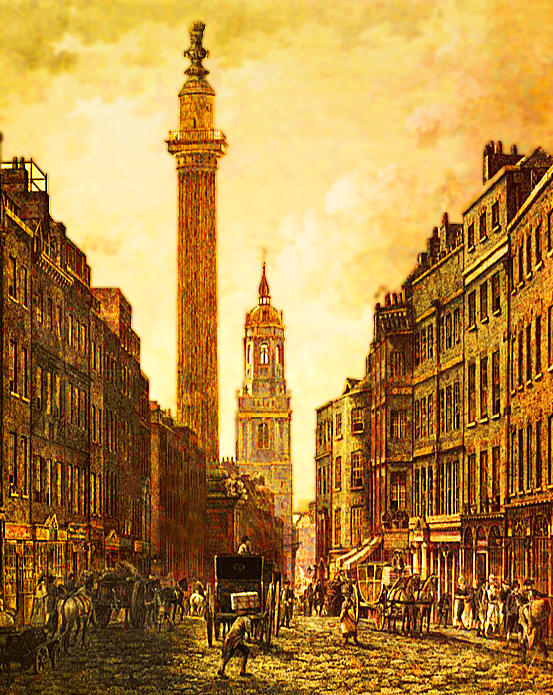 View of Fish Street Hill in 1795 by William Marlow.  The Monument and the church of St Magnus the Martyr dominate the skyline.  © London Picture Archive

FISH STREET HILL
Now, according to Jesse, a certain gentleman who lived in London was once given a dog.  We are told the name neither of the gentleman nor of the dog.  But we learn that the former resided just north of the Thames, near St Paul’s Cathedral, and that the latter, a Newfoundland, had come to London on board a ship that had sailed from its native land.

Now the gentleman in question found himself faced with a problem, which was to do with his riverside home.  He lived in Fish Street Hill, which ran almost due south from Eastcheap down towards the Thames, and was at one time the main thoroughfare to the old London Bridge.  One would be surprised if this street did not have some connection with fish, and such a connection it did indeed have, for the area was known by one and all for its fishmongers.  Indeed, as anyone could have told you, the smell of fish was everywhere.

Fish Street Hill is a London gem.  John Stow in his 1598 Survey of London tells us that the Black Bell tavern on its west side had formerly been a grand house—“for the most part built of stone”—where Edward the Black Prince had once lived.  The original road was dangerously steep—it was only levelled after the Great Fire—and Samuel Pepys noted that horses had a hard time hauling carriages against the slope.  “They could not be got to go up the hill,” he wrote in 1661, “though all the street boys and men did beat and whip them”. 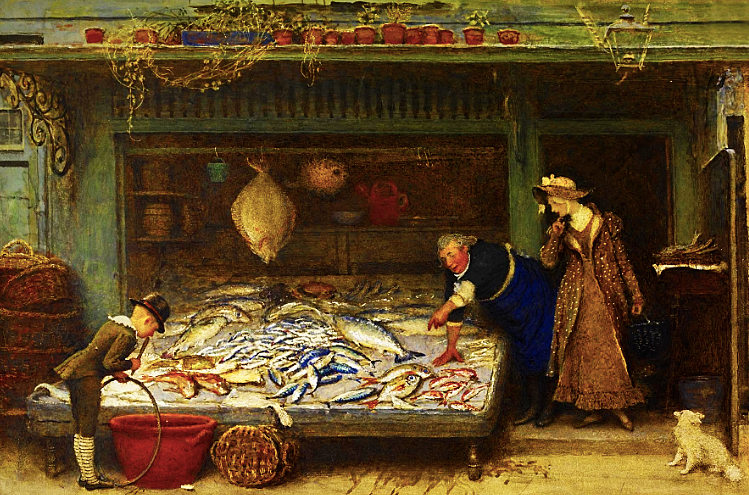 Crossing it at right angles was Fish Street.  The houses here were packed so close together, and the thoroughfare was so narrow and crooked, that neighbours could reach across from their windows to shake hands.  Fish Street also had a reputation for taverns, and they add up to an interesting bit of English history.  The King’s Head was named after Henry VII, the Will Somers after Henry VIII’s jester, and the Cardinal Wolsey after, well, Cardinal Wolsey.  And it had a reputation for a good plate of fish, which perhaps should not surprise us.  A few weeks before the Great Fire of 1666 Samuel Pepys treated the actress Mary Knep, who may or may not have been his mistress, to a “jole of salmon” in one of the Fish Street establishments.   The cut of salmon that he was referring to would have been the head and shoulders, which does not sound too appetising.  Thirty years later John Locke was extolling the virtues of another Fish Street delicacy, namely fresh cod’s head.  But the great philosopher added that the lobsters and oysters were worth sampling as well.

A BERWICK SMACK
I should point out that in writing about taverns I am not accusing our gentleman of intemperate habits.  His only failing, to the best of my knowledge, was to keep a large dog in the narrow confines of Fish Street Hill.  Anyway, the arrangement was obviously unsatisfactory, and the kind-hearted fellow decided that the animal would be better off elsewhere.  As it happened, he knew a man who just might be able to offer a more suitable home.  Letters were exchanged, a deal was done, and before long the dog was relocated to Scotland, which was a very long way from Fish Street Hill but more likely to afford the wretched creature the open spaces nature had in mind for it when putting the finishing touches to its design. 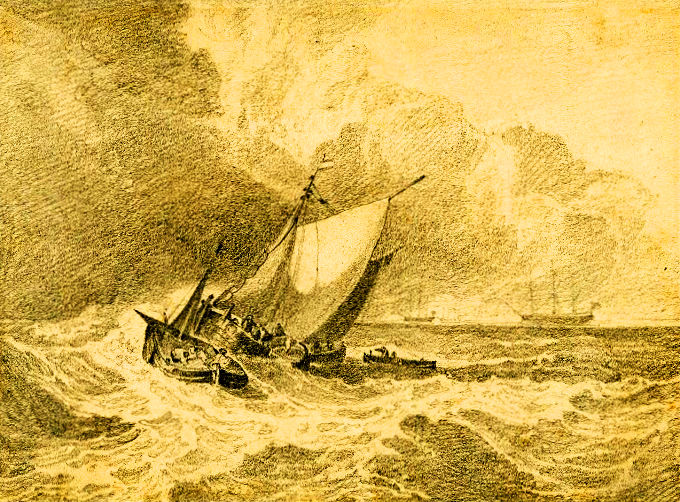 A fishing smack in rough seas, after a painting by Turner.  © British Museum

And so the day came when the dog left its London home, one would have thought for the last time.  Knowing nothing of its fate, it trotted at its master’s side down Fish Street Hill to the river.  At the quayside it was led aboard a type of vessel known as a smack.  We would hope that it was with a heavy heart that the brave voyager’s master stayed on the quayside.  And as the breeze picked up and the smack got under way, and as the distance between man and dog grew ever greater, we can well imagine a little wave of the hand from the one, and a whimper of distress from the other.

A smack was a sloop-rigged vessel of sturdy build.  Known for its speed, and valued for its stability in rough seas, it saw service in the Napoleonic Wars, carrying six or eight carronades.  In peacetime it shipped goods between London and Berwick-upon-Tweed.  The southbound cargo was mainly salmon, but the smack would also carry grain, and the eggs used to purify cane sugar in the London refineries, and passengers looking for a means of travel that was faster and cheaper than a carriage. 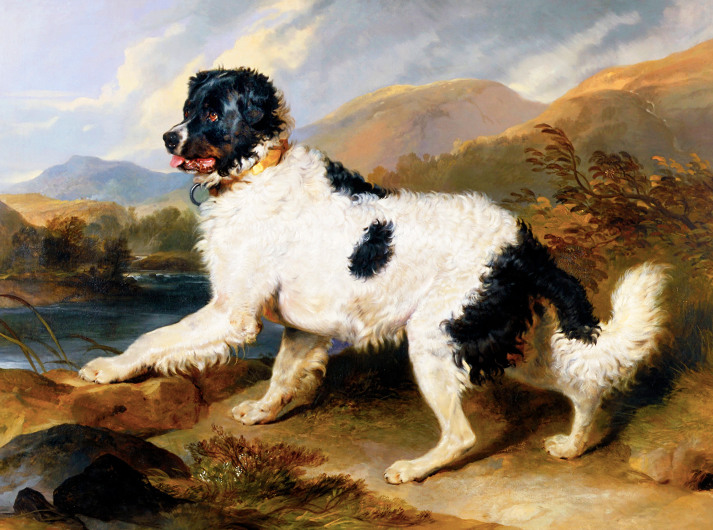 THE LODESTONE OF LOVE
And so the dog sailed north to Scotland, alone on the Berwick smack.  Had its former master entrusted it to the care of a passenger?  We do not know.  Had it been handed over to the crew, and kept below decks, and maybe regarded fondly as a mascot of sorts?  Again, we do not know.  But what we do know is that on arriving in Scotland the dog took the first opportunity to escape.  And having escaped it immediately set south again, heading for its home by the Thames.

Now Edward Jesse, who as we know preserved this charming little tale, made an important point.  What the dog did not do, and what would certainly have been the obvious and easy thing to do, was leap on board the same smack, or indeed any other smack, as it set off down the coast to London.  No, the dog went by road.  And Jesse was at pains to record that this was a road not one yard of which the dog had travelled before.

Guided by some remarkable animal instinct—we might almost say by the lodestone of love—the dog gritted its teeth and plodded south.  We can only guess at the route it took, at the decisions it must have made at the many forks in the road.  The distance as the crow flies is in excess of three hundred miles.  Goodness only knows how long it must have taken the dog to make that journey on foot. 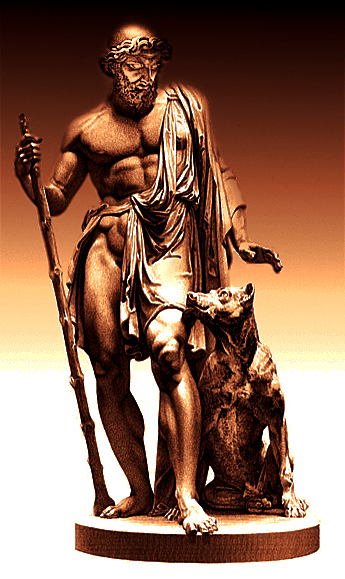 Nineteenth-century statue of Odysseus and Argos by Lawrence Macdonald.  Image in The Art Journal (1855) between pages 318 and 319.

THE HERO COMES HOME
But the dog did in fact get there in the end.  Trudging wearily through the streets of London, it made its way to its home by the river.  The gentleman of Fish Street Hill must have had quite a surprise when he opened his door to find his faithful companion slumped on the pavement outside his door.  Let us hope that he was pleased as well, for the dog, as Jesse relates, was definitely pleased to see him.

And just when we were beginning to think that the dog was more Odysseus than Argos—more the traveller than the stay-at-home—it turns out that the dog was Argos after all.  Exhausted by its ordeal, it only had enough strength for one last gesture of loyalty.  “He could only express his joy at seeing his master,” wrote Jesse, “and then died”.

One Man and his Dog, or, Edward Wix Comes Home