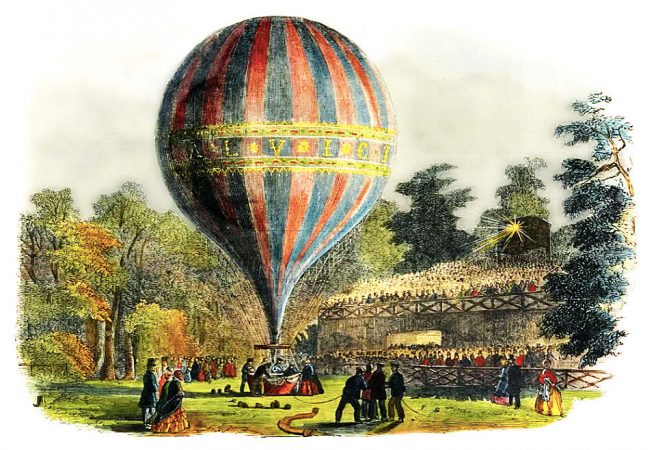 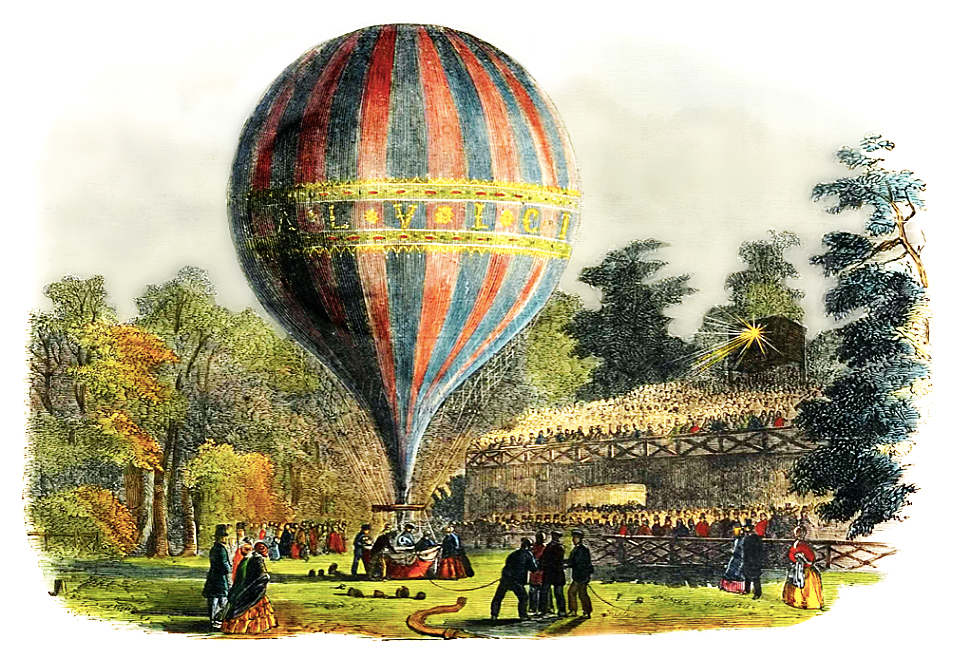 The Royal Victoria, piloted by Charles Green, takes off on an earlier flight, this time from Vauxhall Gardens in 1849.  Engraving dated late 19th century.  © Victoria and Albert Museum

Whit Monday in 1854, which was June the 5th, was unseasonably cool and breezy, but not enough to stop thousands of holidaying Londoners flocking to the Surrey Zoological Gardens.  For an entrance fee of one shilling, or four pounds in today’s money, they could visit the famous menagerie, which was home to ten lions, three elephants, two tigers, two giraffes and two camels.  They could take a stroll round the lake and its well-tended gardens, admire Mr Marryat’s bees, and buy artificial chickens from Mr Cantelo.  The evening would end with a vocal concert and a firework display.  But the highlight of the day was the opportunity to witness a hot air balloon ascending into the evening sky.

The Royal Victoria balloon was fifty-six feet high with dramatic red and gold stripes, and getting it ready for flight was a lengthy undertaking.  “The huge monster was in the agonies of inflation during the entire day ,” reported the Sun newspaper, “and did not obtain the necessary buoyancy until a late hour in the evening.”  Some time after six-thirty the aeronaut, Mr Green, was able to take his place in the basket, and the balloon, released from its tethers, rose up from the Esplanade.  Blustery winds caused the basket to hit first the edge of the orchestra and then the menagerie, knocking Green from his seat.  But soon, to the excitement of the watchers on the ground, the aeronaut was safely back in position, and the giant inflatable floated to the south and out of sight. 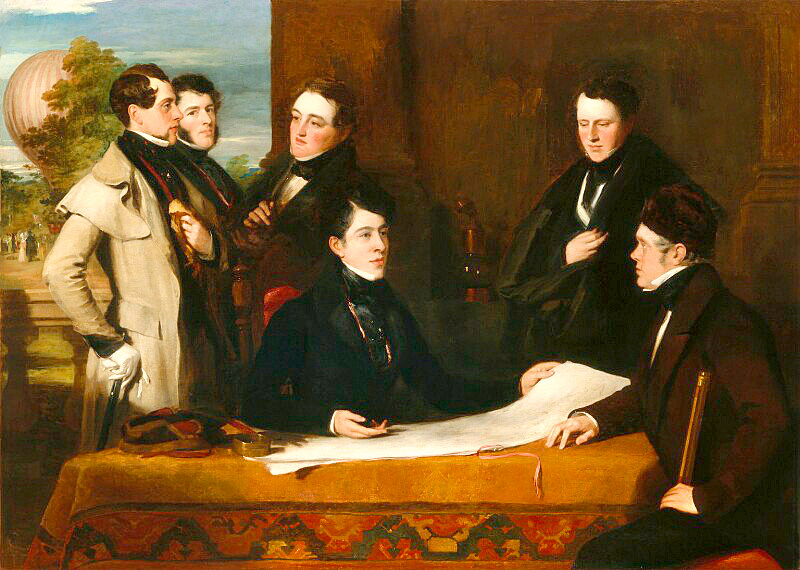 A Consultation prior to the Aerial Voyage to Weilburg.  The flight took place in 1836.  Oil painting by John Hollins dated 1836-1838.  © National Portrait Gallery

WELL CAUGHT!
To the modern mind hot air balloon travel is a quaint and old-fashioned mode of transport.  But in the mid-nineteenth century it was exciting and modern, and aeronauts were as celebrated as the astronauts of today.  The Royal Victoria’s pilot, described as “the veteran Green” by the newspapers, was probably the Charles Green who lived from 1785 to 1870, and who with five friends set the flight distance record by travelling four hundred and eighty miles from Vauxhall Gardens to Weilburg in Germany in 1836.

This amazing feat, which was achieved in eighteen hours, was not bettered until 1914, when Karl Ingold flew over one thousand miles in an Aviatik biplane.  Green’s entry in the Oxford Dictionary of Biography suggests that he retired in 1852, but there are newspaper accounts of him making public flights after that date.  His brewer son George, aged forty-seven in 1854, was also a balloonist, but the epithet “veteran” points more obviously to the older man, who was then sixty-nine. 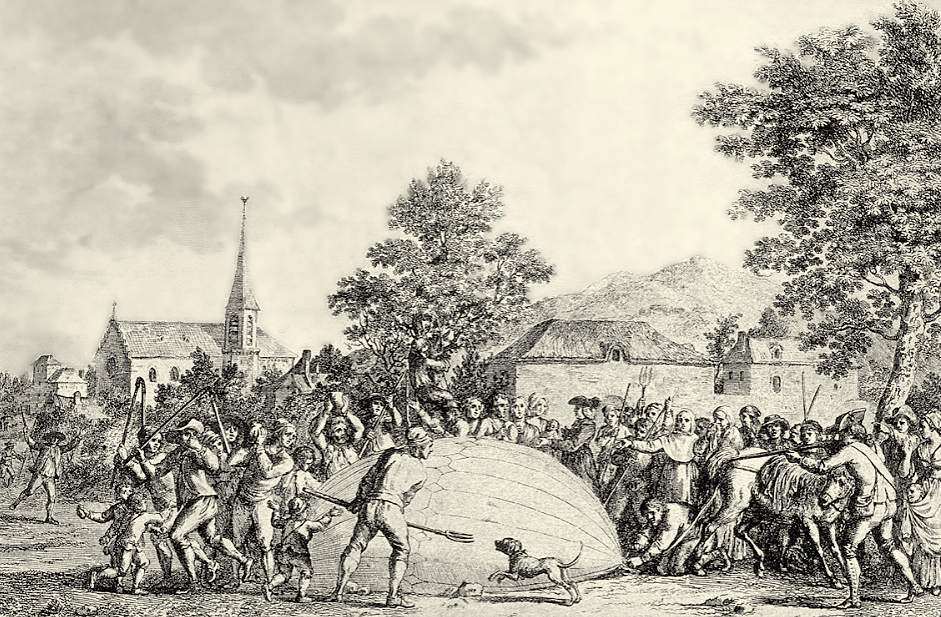 People attacking a balloon that had landed in their village.  French engraving.  Credit: Wellcome Collection  CC BY

At about eight-fifteen in the evening Green began his solo descent over the commons and agricultural fields of rural Mitcham.  This was potentially the most dangerous part of the journey.  Not only were buildings a hazard but the landing, if fast and vertical, might bring the basket down with dangerous force, and, if horizontal, might drag the balloonist along the ground.  But fortunately for Mr Green a Mr Harwood just happened to be on the spot.

Now twenty-seven-year-old Harwood was a celebrated Mitcham cricketer.  And in a manner that is never fully described—he simply “secured the balloon”—he saved the balloonist from what might otherwise have been a very nasty fate.  His heroism must have been witnessed by many, for the arrival of the balloon would have brought streams of Mitcham locals to the scene—the same effect, perhaps, as the landing of a Jumbo Jet in a local park would have today.  To add to the excitement a local bigwig, Mr Ralph Charles Price of Hill House in Carshalton, invited Green to his manor.  No doubt the same invitation was not extended to Harwood, who was a working man, employed in a silk factory.

A LIFE IN MITCHAM
The Greens are well-documented: you can see a portrait of Charles in the National Portrait Gallery in London.  But who was the cricketer Frederick Harwood?

Fred was born in Mitcham in 1827 to George Harwood and Charlotte Elizabeth Harwood née Pincott.  In common with his six siblings he was christened in the parish church of St Peter and St Paul, which, incidentally, is not the local Catholic church of the same name.  Fred lived with his family in Merton Abbey—once the site of the medieval Merton Priory—where small-scale industry had sprung up among open fields.  The source of power was the River Wandle, which snaked its way from Croydon to the Thames at Wandsworth, its banks lined with copper mills and snuff mills and textile factories.

View of the pond at Merton Abbey with William Morris‘s works in the background.  Watercolour by Lexden Lewis Pocock dated after 1881.

There had been calico printing works on the Merton Abbey site since the early 1720s.  In 1832 an auction notice had the following description of the works:

In 1833 Edmund Littler, a calico and silk printer with works in Waltham Abbey and West Ham, took over the lease on the Merton Abbey Print Works.  This was where Fred worked his entire life, and it is likely that his father, who died in 1842, worked there too.  With eighty men and thirty boys and girls on his books in 1861 Littler was a major employer, and in 1877 Arthur Liberty chose the Merton Abbey Works to print all the silks and cashmeres he sold in his Regent Street store. 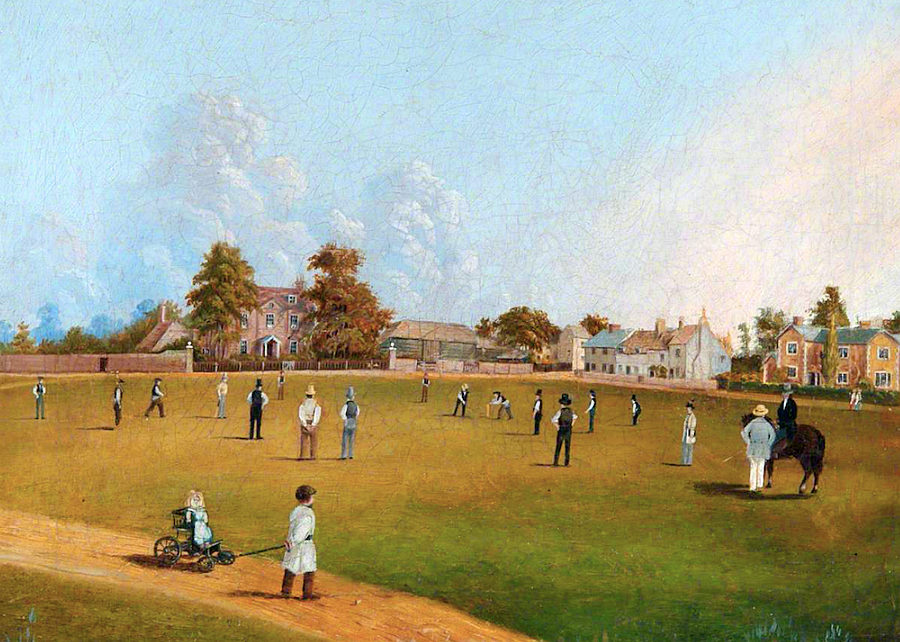 NURSING CRICKETERS
The area around Mitcham’s picturesque cricket green became the nexus of Fred’s interests.  As well as being the home of the sport he loved, it was the home of his sweetheart, Mary Harwood.  Mary, who was probably a relative, lived with her family on what was once called the Causeway and is now Cricket Green.  (The curious “causeway” might have been a track raised above wet or marshy ground.)  After a brief sojourn north of the Thames—they married in Islington in 1856—Mary and Fred moved to a house on the Causeway.  There they stayed for the rest of their lives along with their four sons and four daughters.  The house is no longer there: it was probably demolished along with other cottages to make way for the police station.   The police station is particularly ugly.

As a keen cricketer Fred could not have chosen a better place in which to live.  “The village of Mitcham,” says the Victoria History of Surrey, “has played a very conspicuous part as a Surrey Cricket Nursery.”  (Mitcham Green was also popular locally as a long-established trysting-place.)  Matches have been played on the Green since the seventeenth century, and Mitcham Cricket Club is said to be one of the oldest in the country. 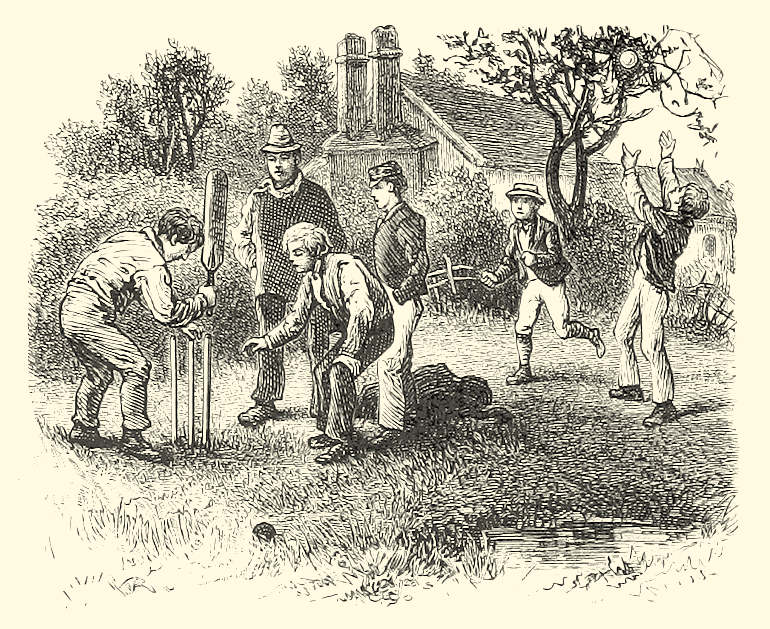 A game of cricket in the garden.  Image in Cecil Frances Alexander Moral Songs (1880) page 124.

Frederick Lillywhite in his Cricket Scores and Biographies, published in 1877, gives us some insight into Fred’s cricketing career:

Frederick Harwood whose name is this season found a few times in the Surrey Eleven, assisted his county as far back as 1851, but particulars did not arrive for insertion there.  Neither does he seem to have been chosen by the committee, often to play for Surrey between those periods, his name being only found now and then in its ranks.  Was a fast, round-armed bowler, fielded generally at short-slip, but as a batsman he did not excel, and he never appeared at Lord’s.  Was born in Mitcham, in Surrey, where he resides, being by trade a silk dresser, June 1st, 1828 (he was actually born in 1827).  Height 5ft. 10in. and weight 11st.  In 1875 he stated he had been engaged as bowler 14 years by the Streatham Gentleman’s Club, from May to August.

As can be seen, Fred was a professional, because he was paid for his services.  He was a player rather than a gentleman, and as a working man with a large family he was probably glad of the extra money.  Kindly regarded by those he played with, he was given the nickname “The Old Horse”, for he was indefatigable, and never gave up until a match was over.  He was an active player until he was about forty-five.  Thereafter he was an umpire and a coach, and his pupils included John Vince, George Jessop, William Henry Game, William Stapleton Trollope, and the Richard Humphrey who played for Surrey and toured with Dr Grace in Australia. 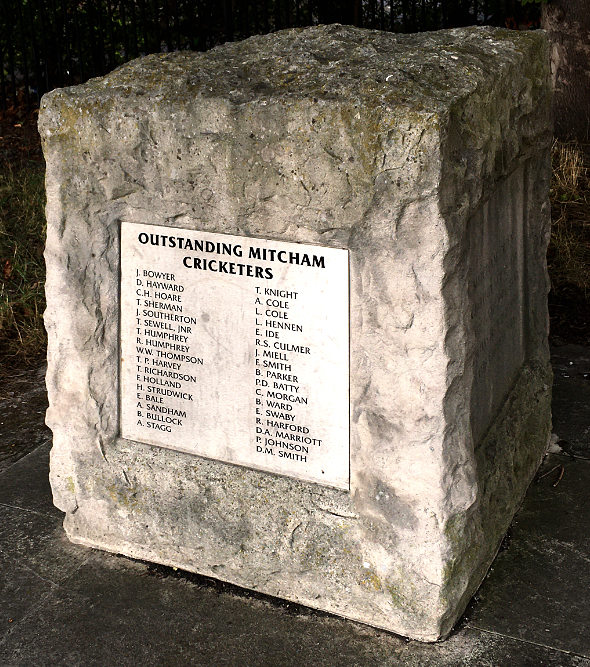 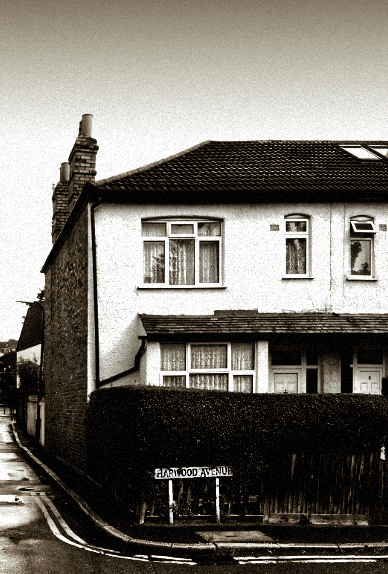 REMEMBERING FRED
On Sunday the 11th of December 1887 Fred died in his house overlooking the cricket green, surrounded by his family.  The following Saturday, at three in the afternoon, he was buried in the graveyard of the parish church, where his wife and two of their children would eventually rest alongside him.  The funeral was well attended by people of all ages, including those he had coached as boys and played with as men.  His obituary promised that his name would live long in the memories of Surrey cricketers.

In a corner of the Mitcham cricket green, just over the road from the clubhouse and the pub named after cricketer Burn Bullock, stands a memorial to a number of well-known Surrey cricketers.  There is no mention of Fred: there were obviously many players more talented than him.  But I hope this short article will serve as a memorial to Frederick Harwood—working man, cricketer and son of Mitcham.

Save My Darling: Love and Attempted Suicide on Clapham Common