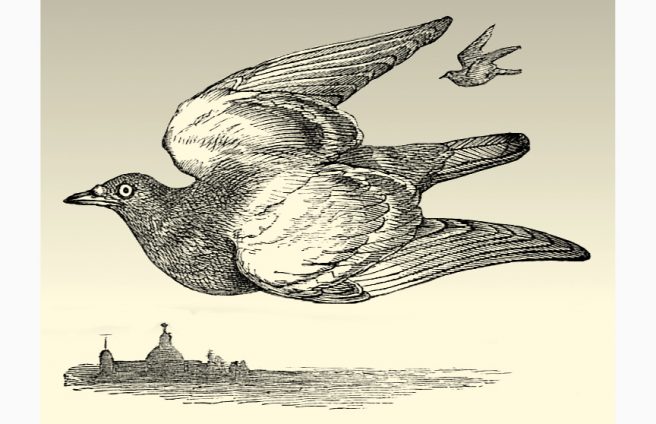 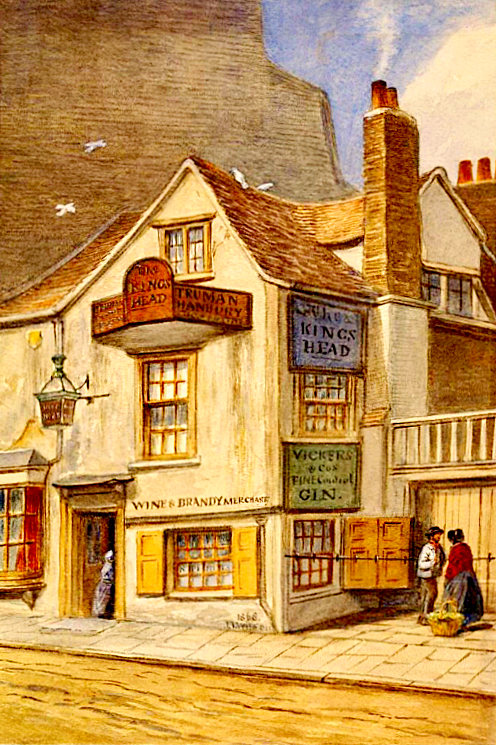 I find depictions of London in art a constant source of fascination, and I very much like the work of the nineteenth-century painter John Thomas Wilson.  The Victoria and Albert Museum has eight watercolours Wilson executed between the years 1868 and 1871, and a ninth which was very much earlier, painted in about 1830.  They have as a common theme the faithful depiction of public houses in Hackney and other parts of East London.  They are beautifully observed, and they are shot through with a strong sense of time and place.

Equally interesting are written descriptions of old Hackney, and a writer who comes to mind in this connection is William Henry Hudson, who was born in 1841 and died in 1922.  Hudson had English and Irish blood in his veins, but for the first twenty or so years of his life he lived in Argentina, where he developed a passionate interest in natural history.  When he was in his early thirties he emigrated to England, and having settled in Bayswater he threw himself into his writing, publishing an impressive collection of titles on the subjects closest to his heart. 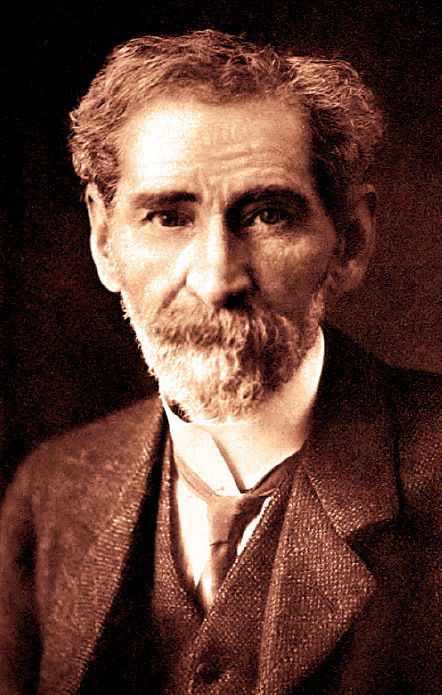 A particular preoccupation was ornithology, and in 1898 Hudson brought out a delightful volume with the title Birds in London, which was the product of his many wanderings through the capital’s green spaces, as well as a fine exercise in an elegant and richly descriptive prose style.  In the following passage, for example, he enumerates the species he observed in Hampstead, turning what it is in fact a list into something approaching poetry:

the following small birds, summer visitors, breed on the Heath or in the adjacent private grounds, especially in Lord Mansfield’s beautiful woods: wryneck and cuckoo, grasshopper-, sedge- and reed-warblers, blackcap and garden warbler, both whitethroats, wood and willow wrens, chiffchaff, redstart, stonechat, pied wagtail, tree-pipit, red-backed shrike, spotted flycatcher, swallow, house martin, swift and goldfinch.  Wheatears visit the Heath on passage; fieldfares may be seen on most days throughout the winter, and occasionally redwings; also the redpole, siskin, and the grey wagtail.  The resident small birds include most of the species to be found in the county of Middlesex.  The bullfinch and the hawfinch are rare. 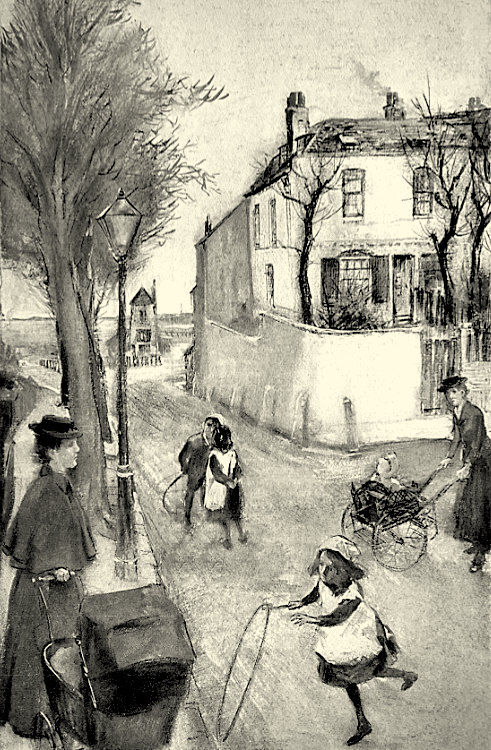 SHINING IN THE SUN
But to return to the subject with which I started—the East London of the nineteenth century—I want to relate a little story of Hudson’s which is set on Hackney Marshes.  I shall come on to the story in due course, but it is worth pointing out first how beautifully Hudson described the setting.  To him, the Marshes were remarkable for their spaciousness, which engendered a “feeling of liberty and ease” somewhat at odds with the general character of that part of the city.

the distant buildings, ugly perhaps when viewed closely, at the distance of a mile, were looking strangely picturesque in the pale smoky haze, changing, when the sun was obscured by a flying cloud and again burst forth, from deep blue to bright pearly grey; and the tall chimneys changed, too, from a darkness that was almost black to glowing brick-red.

As he walked along the river he came across a solitary swan, which rose up and flew away, low in the wind, its white wings “shining in the sun” and looking “wonderfully bright and beautiful against the vivid green expanse”. 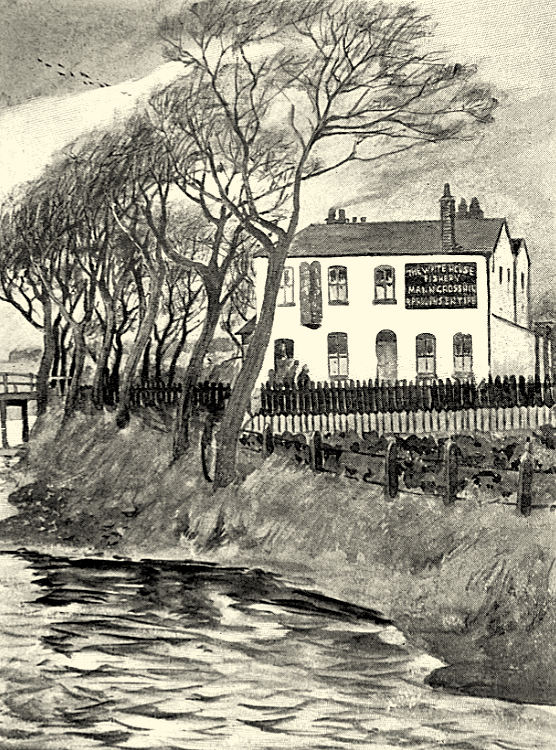 The White House Fishery on Hackney Marshes.  Image by Arthur David McCormick in William Henry Hudson Birds in London (1898) between pages 206 and 207.

LOWEST OF THE LOW
Hudson’s story begins with his chance encounter with an old fellow who had known the Marshes all his life.  He told Hudson that ever since he had been a boy he had been greatly attached to the place, and that he had seen some changes over the years, not least in the behaviour of those who went there for the purpose of sport.  The meeting place of these sportsmen was the White House Fishery, a pretty building that stood by a bridge over the River Lea, looking not unlike a country inn.  The name, though, was misleading, for the favoured sport on the Marshes was no longer angling.  That gentle activity had been superseded by two decidedly less pleasant pursuits.

One of these was rabbit coursing, a form of hunting in which the prey was harried and set upon by dogs, typically terriers.  The old man’s objection was primarily to the brutality of the sport, but also to the sort of people who practised it or watched it being practised.  He did not like them one bit.  They were

raucous-voiced, lawless, obscene in their language, filthy in their persons, and vicious in their habits.

The old East Ender thought of them as the lowest of the low, and, as a proud Londoner, he wanted nothing to do with them. 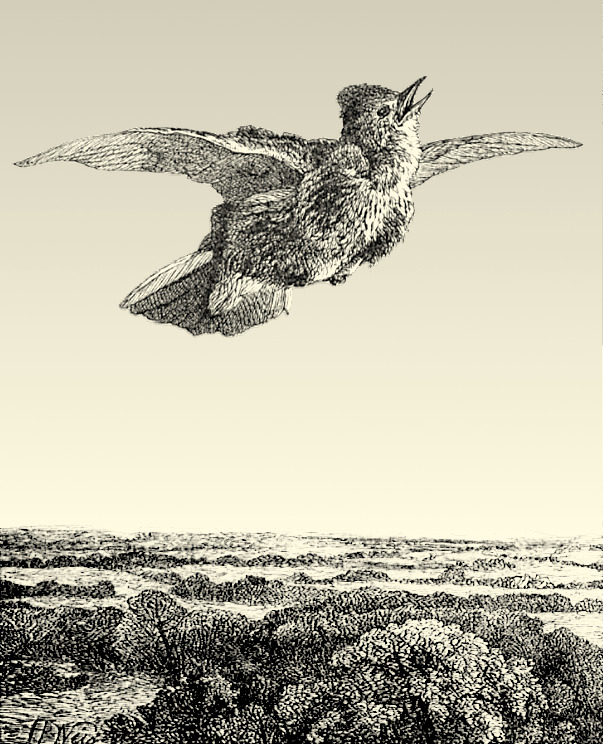 A skylark winging its way high above the land.  Image by Harrison Weir in Sarah Trimmer The History of the Robins (1869 edition) between pages 2 and 3.

THE REMARKABLE SKYLARK
Well, the County Council had finally banned rabbit coursing, and Hudson’s acquaintance was glad of the fact.  Nor was he sorry to have seen the end of the other unpleasant sport, which was shooting wild birds.  Starlings and larks, pigeons and sparrows—all these were killed for the entertainment of the Hackney Marshes sportsmen, who shot at them as they flew out from traps.  Hudson was left in no doubt that these men—“a rough lot of blackguards”—were utterly unlikable.

Not surprisingly, then, it gave the old fellow a great deal of pleasure to tell Hudson about the remarkable skylark.  It had appeared a few summers previously, flying high above Victoria Park.  Possibly it had escaped from someone’s cage, but at all events it had a distinctive song, and all day long it cast its melodic spell on the people of Hackney.  And, of course, it attracted the wrong sort of attention from the sportsmen on the Marshes, who came out every Sunday morning with their guns, hoping to notch up a spectacular kill.  Try as they might, though, they failed, and they kept failing until the cold weather came, when the happy skylark disappeared, taking with it its beautiful song.

But a less happy fate awaited one of the many pigeons those “gentlemen” tried to blast out of the sky.  The facts, as related by Hudson’s companion, were as follows.  The pigeon in question was spotted winging its way towards London, and one young sportsman, taking careful aim, succeeded in bringing it down.  When the young man went to collect his prey he realised that he had shot a homing pigeon, or, more precisely, a carrier pigeon, for a small card bearing a message was attached to one of the wretched creature’s wings. 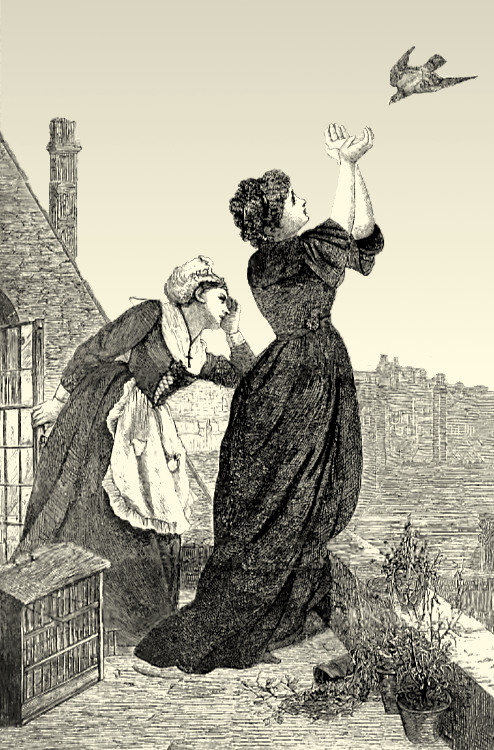 Parisians using carrier pigeons to send and receive messages during the 1870-1871 Siege of Paris.  Image in Harper’s Weekly 31 December 1870.

A MOST VALUABLE BIRD
Homing pigeons were highly valued for their role in carrying important information.  They covered great distances, not only from city to city but also from country to country, and continental carriers were known to fly over the Alps and sweep across the Channel.  They were used by the French to get information past the Prussians during the 1870-1871 Siege of Paris, and their twentieth-century counterparts conveyed confidential messages throughout both world wars.

In the mid-1850s the London Pigeon Club was established, holding its meetings at an address off Berkeley Square.  The Society organised races, published a programme of key events, and generally endeavoured to maintain the highest standards through the rules that governed competitive engagement.  However, not everything was under its control, and Mr Gandall, an enthusiastic amateur, no doubt spoke for many columbarians when he lamented the fact that British homing pigeons could not rival Belgian pigeons because the latter

have not the great enemy that we have—the gun.  Here, if a pigeon, exhausted, pitches on a farm building, out comes the farmer or his son and pops him off; or a gamekeeper, seeing him lowering as he approaches the covert, shoots.  I know these to be facts, not merely from conversations I have had with both keepers and others, but from having had many of my birds come home shot. 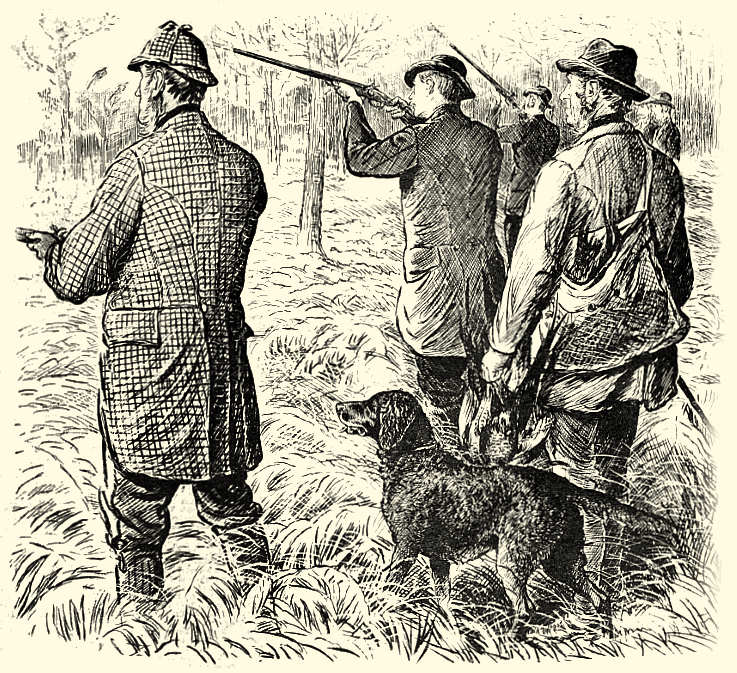 Sportsmen in action with their guns.  Image in The Illustrated Sporting and Dramatic News 6 October 1883.

Gandall had a point, for homing pigeons were frequently shot at, and not just by trigger-happy farmers.  In 1892, for example, a Londoner by the name of John Cox was found guilty of shooting down a pigeon worth a pound or more, and was sentenced to a month’s hard labour.  Then in 1893 another man with a gun, John King, brought down a pigeon that had a fine track record, having flown from Cherbourg in France to Wandsworth in South London.  King was taken to court by Edward Standen of the Homing Pigeon Protection Society, who had the thankless task of establishing the identity of the dead bird.  He solemnly produced a basket in which, he claimed, he had the mother and father and grandfather of the victim, all four bearing the same distinctive marks.  Although the furious flapping of wings reduced the court to fits of unkind laughter, the defendant was made to pay the value of the pigeon he had shot, which was thirty shillings, together with a twenty shillings fine and a further twenty-three shillings in costs. 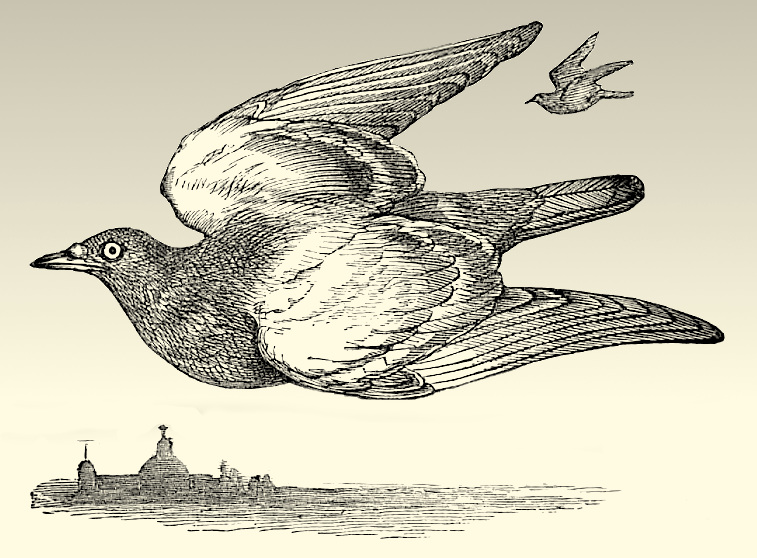 THREE SAD WORDS
John Cox has a special relevance in that he was caught on Hackney Marshes, doing exactly what Hudson’s old companion deplored.  And he was probably pretty pleased with himself—until he was arrested by a duty constable—just as the young Sunday morning sportsman was proud of his achievement too.  But the story does not end there.  Not quite.  For there is still the matter of the card the pigeon had been carrying on its wing.

The card had no means of identification.  There was no name on it, no provenance, no destination.  But on it had been written a message, a very brief message consisting of only three words:

Moonlight on the Stairs, or, A North London Story

Frederick Harwood, or, The Surrey Cricketer and the Hot Air Balloon

Save My Darling: Love and Attempted Suicide on Clapham Common