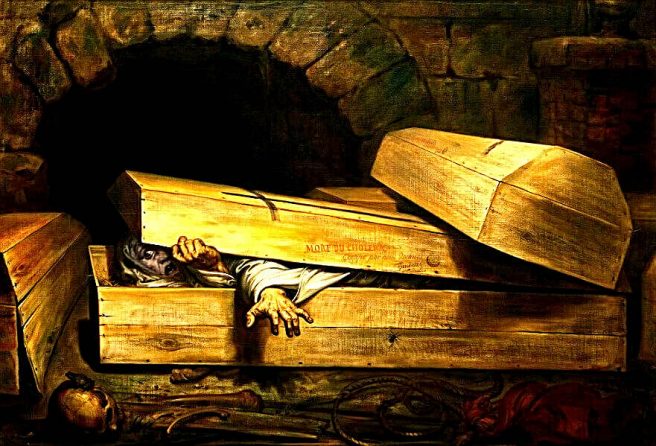 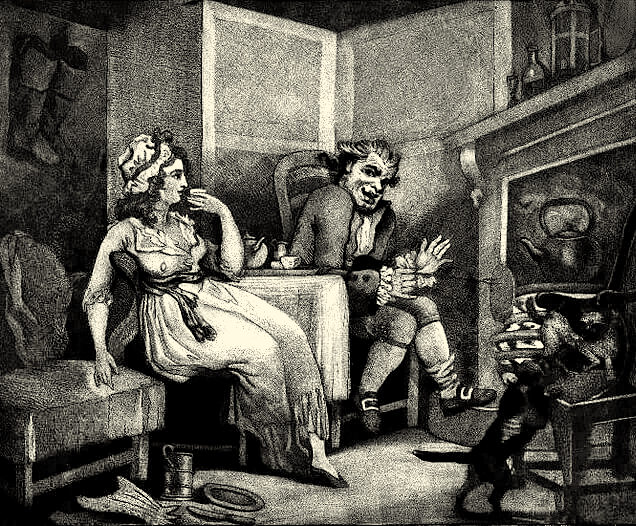 Giuseppe Grimaldi the actor, aged 75, depicted in a satirical print.  Dated 1788, the year of Grimaldi’s death.

Joseph Grimaldi, the famous Regency actor, has achieved immortality as the great pantomime clown, the original “Joey” of circus tradition.  But what of his father Giuseppe?  A native of Genoa, and a dentist by profession, Giuseppe came to London in about 1760, where he was engaged by David Garrick at Drury Lane as a dancer and pantomime buffoon.  He has of course been entirely eclipsed by his famous son, but there is a remarkable story about him that deserves to be recorded.

This story concerns Giuseppe’s death in 1788—more particularly, events before and immediately after his death.  First, though, we must set the scene.  And the setting is Lambeth Marsh on the south bank of the Thames.

ACROSS THE FIELDS
A map of the area dated 1767 shows large tracts of largely uninhabited land, now the site of St Thomas’ Hospital, and dominated at the time by Lambeth Palace.  However, a line of dwellings can be seen along a riverside road called Stangate, and it was here that Giuseppe Grimaldi at some point purchased a house and garden.  The story goes that he moved into the property in the middle of a harsh winter, and, wanting to see what the garden would look like in spring, he immediately had the ground planted with artificial flowers and the trees with artificial foliage and fruit!

Early eighteenth century view of Lambeth from the north side of the River Thames by Jan Griffier I.  Lambeth Palace can be seen to the right of the picture, with the houses in Stangate extending to the left.

By all accounts, he was a man of pronounced moods.  He was, for example, afraid of the fourteenth day of the month.  In the days leading up to the dreaded date he was prone to fits of anxiety, and, after it had passed, he was a new man, and went around saying “Ah! Now I am safe for another month”.  The root of his superstition may have had something to do with the fact that he was both born on the fourteenth of one month and christened on the fourteenth of another.  Oddly, he chose to be married on a fourteenth.  And strangely, because in this case he had no choice in the matter, he died on another fourteenth.

Giuseppe’s gloomy temperament drove him to wander round churchyards and burial grounds for hours on end.  There he would lie down, if he could find a dry spot, and meditate.  He would circulate amongst the headstones, reading the inscriptions and trying to recreate in his imagination the circumstances under which the occupants of the graves had died, what had they died of, and how they had conducted themselves in their final moments.  He was spotted once in the burial ground of St Clement Danes in Portugal Street, staring thoughtfully at the grave of Josias “Joe” Miller, a comic actor singer who had died in the 1730s.  And his morbid ruminating did not end there—more of which later! 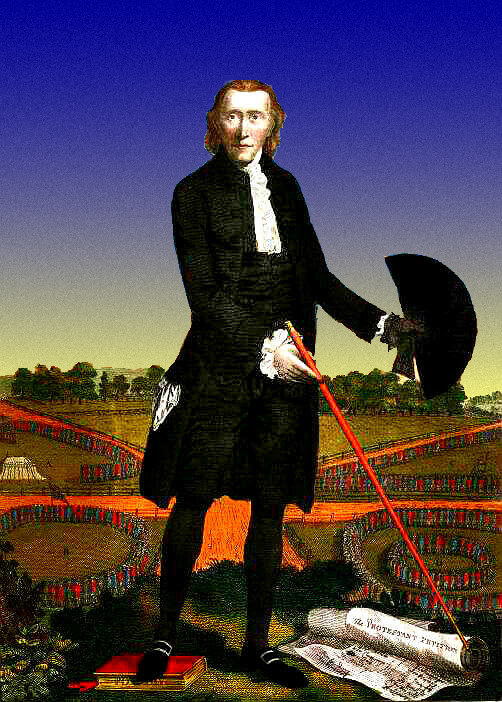 Lord George Gordon in 1780 with St George’s Fields in the background.

Back to Lambeth Marsh.  To the east lay St George’s Fields, which were famous not just as the assembly point for the 1780 anti-Catholic Gordon Riots, but also as the place where in 1711 a Mr Shanks staged a grinning contest, for which admission was sixpence, and the prize a gold-laced hat.  Giuseppe would walk through the Fields with a bookseller friend.  Unfortunately the bookseller’s name has not come to light, but it is a fair guess that he had antiquarian tastes, as it is said that he and his companion would discuss “all the superstitious legends of Germany and Great Britain”.  These walks across “the then dreary region” of the Fields cannot have done much to lift the spirits of the saturnine Grimaldi.  He was once persuaded by another friend to meet some drinking companions in a tavern in St James’s Market, which was just across the river in Piccadilly, but he found their jollity less than helpful.  Sinking into an even deeper gloom, he beat a hasty retreat.

However, none of this eccentric behaviour compares with what happened when the bookseller lent Grimaldi a copy of The Uncertainty of the Signs of Death.  As we shall see, this book, with its cheerless title, had a profound effect on the melancholy Italian.

LOOKING FOR A SIGN
The author of The Uncertainty was an anatomist by the name of Jacques-Bénigne Winslow.  He had in fact been born in Denmark but he became a naturalised Frenchman.  He is remembered to science as the first person to describe the omental foramen.  Our interest, though, is not in this or in any other part of the human abdomen, but in the treatise that Winslow published first in French, and then, in 1746, in an English translation. 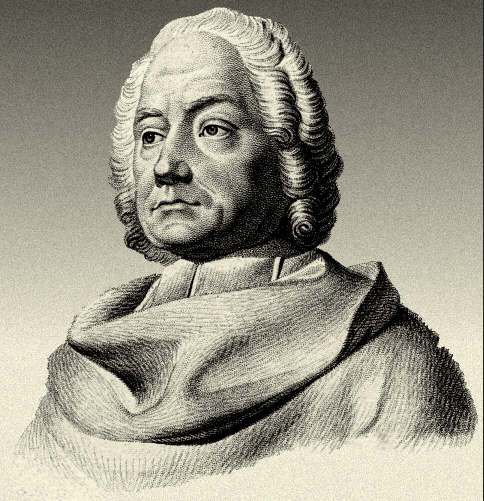 We only have to glance through the contents pages to understand how Winslow’s book must have affected Grimaldi.  For the anatomist was concerned not only to discuss difficulties in determining if death had indeed occurred, but also to describe the awful consequences of getting the diagnosis wrong.  In short, he was preoccupied with cases of premature burial.  Some of these are horrible, others decidedly bizarre.  An example of the latter is the story of a woman buried with a ring on her finger in the churchyard of Orléans:

Next Night a Domestick, induced by the Hopes of Gain, uncovered and opened the Coffin, but finding that he could not pull the Ring off the Finger, began to cut the latter; the violent Agitation produced in the Nerves by the Wound, roused the Woman, whose hideous Shrieks, extorted by the Pain, not only struck Terror into the sacrilegious Robber, but also put him to Flight without his intended Booty; the Woman in the mean time disengaged herself, as well as possible, from her Shroud, returned home, and lived with her Husband ten Years, during which Time she furnished him with an Heir and Representative of his Family.

Such then was the macabre reading matter that tipped Giuseppe Grimaldi over the edge.  There and then he developed a morbid fear of being buried alive, the consequences of which led to a course of action that beggars belief, and to which we shall very soon turn.  But first a few remarks on the condition—taphophobia, or taphephobia—of which the superstitious Genoese was a victim. 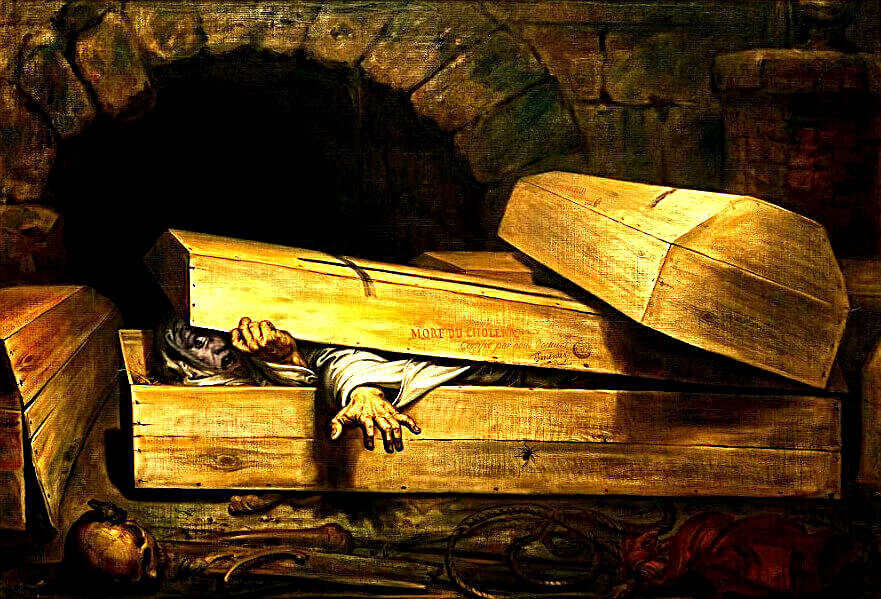 TAPHOPHOBIA
Coming from the Greek, the word means “fear of the grave”.  Although not attested by the Oxford English Dictionary—which, oddly, does acknowledge the Latinate “vivisepulture”, or “burying alive”—it is nonetheless used in medical journals.  A book on the subject of premature burial was published in 1896 by William Tebb and Edward Perry Vollum, in which a surprising number of historical figures featured.  The philosopher George Berkeley, the Irish politician Daniel O’Connell, and the statesman and poet Lord Lytton all suffered in the same way as Grimaldi. The novelist Wilkie Collins would leave a note on his dressing-table asking to be very carefully examined if found “dead” in the morning.  Hans Christian Andersen carried in his pocket a note to the same effect.

Tebb and Vollum went on to record the measures taken by taphophobics to ensure that they were irretrievably dead when interred.  One gentlemen, a New Yorker, simply insisted that his coffin be laid in the family vault without a lid, with two caretakers watching out for signs of life.  A more extreme precaution was to request the severing of an artery or a vein, or the cutting off of a finger.

But the most drastic measure was that ordered by Giuseppe Grimaldi.  Tebb and Vollum seem not to have known the story—though they knew others like it—but we are fortunate in having other sources to draw on.  One is Grimaldi’s will. 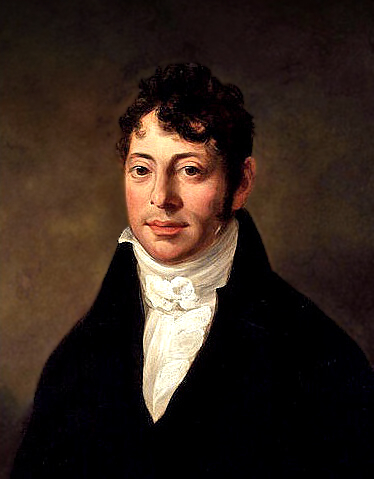 In his will he made the usual provision for four of his children, among them Joseph and a daughter, Margaret.  But he also made a special request that Margaret should “see me out into my coffin and the day that I am buried to sever my head from my body, the only favour I request, and then to follow me to the place of my burial”.  In order to ensure that Margret carried out his grisly request, he offered a financial incentive, one element of which—a gold watch—was alone worth seventy guineas.

The comedian Jacob de Castro records that Margaret did indeed see to her father’s post mortem decapitation.  Unable to perform the act herself, she sent for a surgeon “who took it”—the head—“off”.  However, anxious to lay claim to the bequest, she did the legal minimum by “touching the instrument”—the surgeon’s knife—while the operation was being performed. 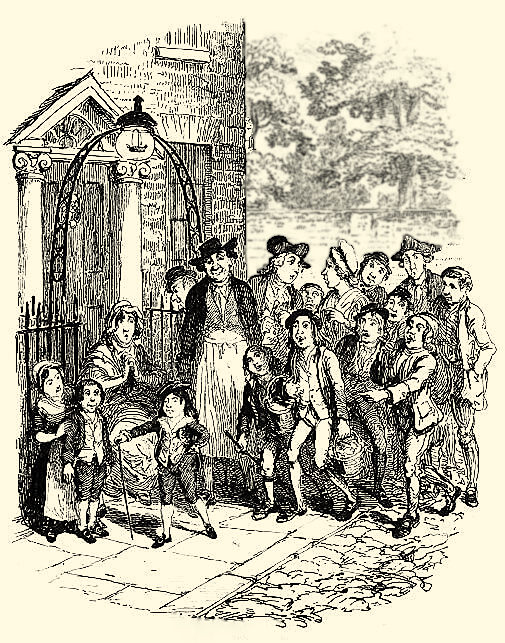 Young Joseph Grimaldi was forced by his father Giuseppe to walk to his grandfather’s house in Bloomsbury every Sunday, dressed to the nines.  Inevitably he was taunted by the local children.  Illustration by George Cruikshank in Grimaldi’s Memoirs volume 1 (1838) pages 22-23.

FATHER AND SON
One wonders what life with such a father must have been like.  Well, we have a pretty good idea, because Joseph’s memoirs, edited by Charles Dickens, were published shortly after his death in 1837.

Giuseppe, it would seem, was a cruel father.  He put Joseph on the stage at Sadler’s Wells as a juvenile tumbler when he was just over two years old.  He was a tough disciplinarian who handed out thrashings to any of his many children—he fathered at least ten with three different women—who stepped out of line.  Once, hoping to find out if he was loved or not, he feigned death by lying under a sheet in a darkened room.  One of the boys, John, whooped with delight, and received a sound thrashing from his father, who had leapt up from his death-bed in a lather of indignant rage.  Joseph had said the right thing—“O, what would I give to see him alive again!”—but he was so frightened by Giuseppe’s anger that he hid in the coal-cellar for four hours. 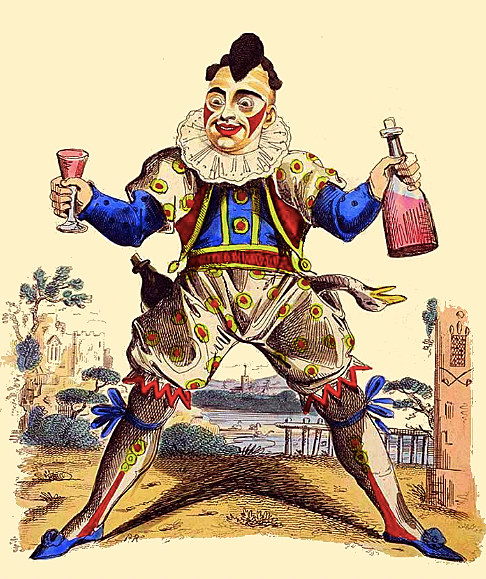 SOURCES
My research into the life of Giuseppe Grimaldi has relied on a number of contemporary sources, the most important of which are Boz (= Charles Dickens) ed. Memoirs of Joseph Grimaldi volume 1 (1838) and Jacob de Castro Memoirs (1824).  For fear of premature of burial I have principally used Jacobus Benignus Winslow The Uncertainty of the Signs of Death (1748) and William Tebb and Edward Perry Vollum Premature Burial (1896).