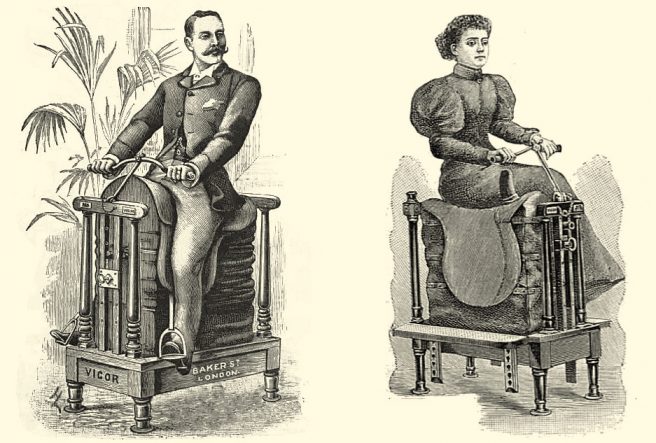 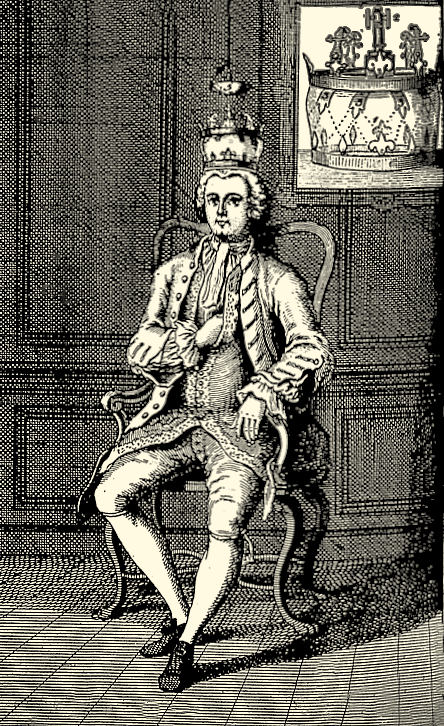 The Chair of Beatification.  Image in Benjamin Rackstrow Miscellaneous Observations (1748) between pages 48 and 49.

If at any point you have read my piece on Benjamin Rackstrow, whose museum at no.197 Fleet Street drew fascinated crowds, you will have realised that he had an extraordinary range of interests.  Many of these were decidedly curious, and few more curious than the Chair of Beatification, an alarming contraption that passed a massive electrical charge through the body of a human subject.  In the name of Science, naturally.

Rackstrow may have had strange ideas about how to promote health and happiness, but he was not unique in this respect.  For in 1704 a gentleman by the name of Francis Fuller published his Medicina Gymnastica, a treatise on the remarkable benefits of physical activity, in which he claimed that

if some of the Advantages accruing from Exercise, were to be procur’d by any one Medicine, nothing in the World would be in more Esteem, than that Medicine would be. 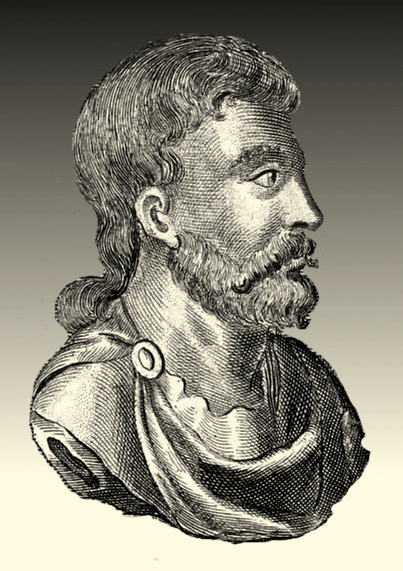 Fuller argued that bodily movement is a natural analgesic—that “swift motion” will as effectively distract us from the perception of pain as it interrupts the flow of thought.  He proposed that horse riding was particularly beneficial in this respect—more of this later—but he also recommended the sort of gentle oscillation produced by a boat or a swing.  He was even able to invoke the authority of classical antiquity, and it is indeed the case that the Roman encyclopaedist Celsus believed in the therapeutic value of rocking, which might be anything from the bobbing of a vessel in a harbour or on a river to the jolting of a litter or a carriage.  For those who were stuck at home, the learned Celsus prescribed the use of a bed that was hoisted above the floor and swayed from side to side, or resting on rockers, like a cradle, so as to be tipped this way and that by hand.

The Roses of Heliogabalus by Lawrence Alma-Tadema.  Heliogabalus or Elagabalus was the assumed name of the third-century Roman emperor Antoninus.  Oil painting dated 1888.

IT WORKS!
Fuller, it should be said, had a nice way with words.  He declared that

if the Romans, out of Luxury and Wantonness, could be swung to Sleep in Hanging Beds of Silver, it may be allow’d, that a Person in Torment may use the same Means to obtain Ease.

I am not entirely sure who in antiquity had these particular arrangements—Fuller might have had the appalling Elagabalus in mind—but the image of hammocks made of precious metals is rather beautiful.  Another curious reference in Fuller’s musings is to the petaurum, which he calls “the great Swing of the Ancients”.  The petaurum is something of a mystery.  The Roman satirist Juvenal mentioned it in connection with acrobats, and it is possible, though not certain, that he was referring to what we would call a trapeze.  Evidently Fuller thought so too, and this will do for our purposes. 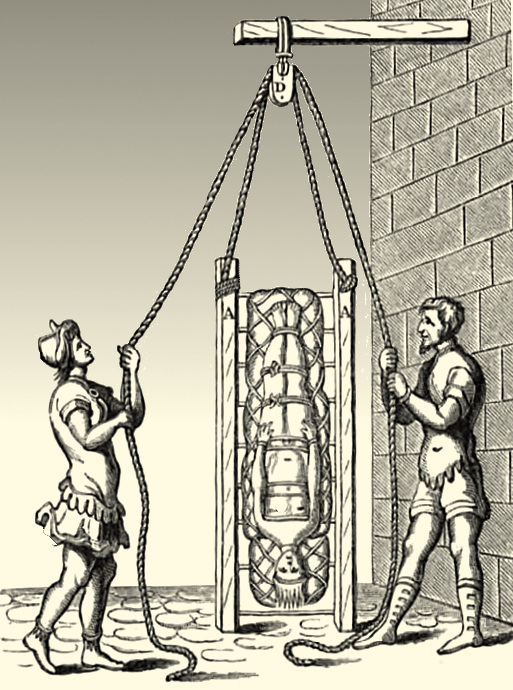 Fuller must have seen himself as flying in the face of orthodoxy, arguing that a pain-relieving procedure should not be dismissed if it actually did the trick.  In support of this splendidly empirical approach he gave the example of a “very Worthy Gentleman” who suffered bouts of an unidentifiable colic.  Finding that “lying with his Head downwards” relieved his symptoms, the fellow ordered a machine to be built consisting of a sturdy framework and a revolving wooden board.  Bolted to the board, which was inverted by his servants, he hung upside down until the pain subsided.  “And I hope none will say,” insisted Fuller, “it was unbecoming a Grave and Wise Man, to make use of such odd Means to get rid of an unsupportable Pain.”  He had a point, for this sort of inversion therapy, which is still practised today, goes back at least as far as Hippocrates, who recommended spinal traction as a way of tackling back pain.

A PENNY FOR YOUR PAINS
But even the broadminded Fuller would have had his doubts about the treatments that men like Basil Burchell were advertising in the newspapers.  Whereas Fuller was from Bristol, Burchell was very much a London phenomenon.  He had a shop near Drury Lane at 79 Long Acre, where, along with other curious items, he sold his “famous” sugar plums.

Sugar plums, of course, are not plums at all, but small round sweets.  Burchell’s were a surefire cure for worms, or so he claimed, which makes one wonder what he put in them.  Given that his advertisements described the drastic voiding of the patient’s bowels, a major ingredient must have been a purgative, and his detractors spread rumours about the use of dangerous compounds based on mercury, antinomy or arsenic.  As well as ridding the patient of worms—and Burchell offered a great deal of repellent information on the subject in a slim pamphlet—his sugar plums were effective against an implausibly wide range of ailments.  Price one penny each. 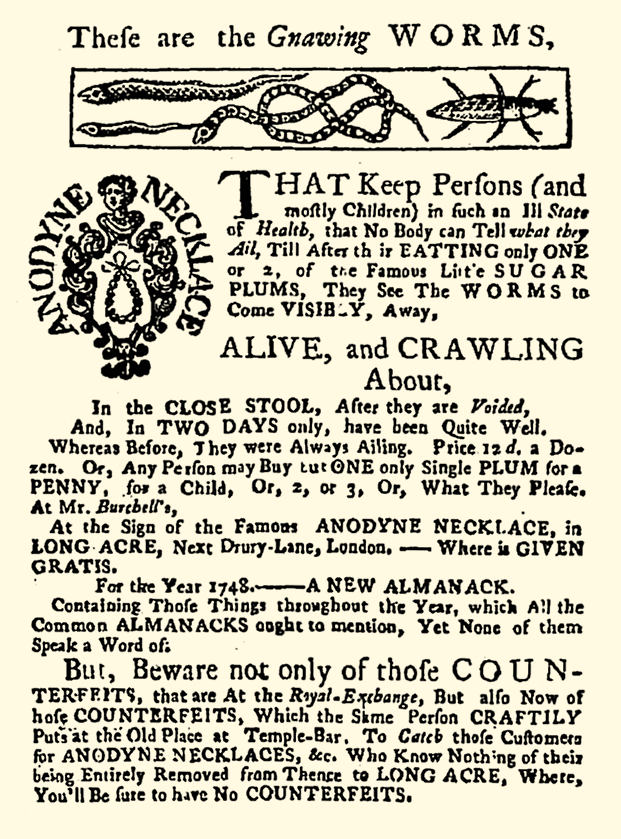 In common with all creative geniuses, Burchell was tormented by the real or imagined threat of imitators, and when we turn our attention to another of his miraculous products, the so-called anodyne necklace, we find him warning his customers against an underhand operator with premises in the Royal Exchange and in Old Place at Temple Bar who was busily, and no doubt profitably, selling counterfeits.  These necklaces were sold as a form of pain relief for infants cutting their teeth, a process which now we know is perfectly natural, but which was then widely believed to be a cause of disease and death.  An infant might refuse medicine but happily wear one of Burchell’s necklaces, which were nothing other than herbal garlands.  They gave off “subtle effluvia” that somehow opened the gums to allow the teeth to make their way out.  This sounds harmless enough, but the herb was probably henbane, which is toxic in large doses. 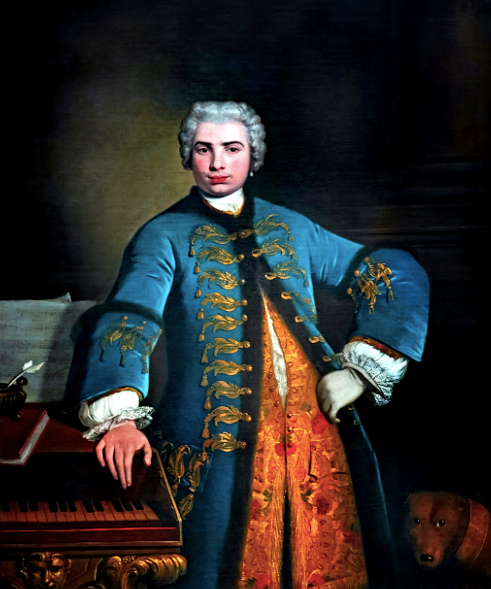 WILL I WON’T I?
However, Burchell paraded impressive testimonials, and he liked to mention Dr Paul Chamberlen, who had secured him the patronage of three of the four royal Georges and of Caroline the Duchess of Brunswick.  Chamberlen himself had been responsible for introducing the true inventor of the anodyne necklace, Francis Tanner, to a grateful world.  The fact remains, though, that Chamberlen and Tanner were more quack than sober scientist.

Burchell was nothing if not enterprising, and he also advertised a “treatise” on the interpretation of women’s dreams, illustrated with engravings.  Sadly London Overlooked has failed to find a copy—but some idea of it can be formed from Burchell’s own puffery.  The dreams—and there were evidently many of them—had deep significance for those who dreamt them.  For example, the eighth guaranteed marriage, the tenth perpetual spinsterhood.  Nor was Burchell unable to spot the opportunity to display his wit, for his more detailed analysis of the tenth dream was that it indicated “Ten to One” that the dreamer would never find a husband.  And his wit could be caustic, not to say unpleasant, for a young girl who dreamt the thirty-fourth dream might as well “wed Farinelli”, Farinelli being a famous Italian castrato.  The accompanying illustration of the signor evidently included the “Marks of His Castration”, which leads one to conclude that Burchell was appealing not only to the superstitious but to the prurient as well. 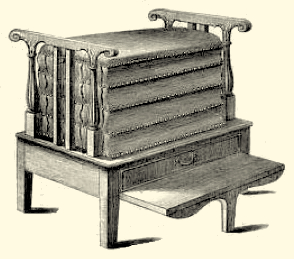 Design for a chamber horse.  Image in Thomas Sheraton The Cabinet-Maker and Upholsterer’s Drawing-Book appendix (1802) plate 22.

THE CHAMBER HORSE
As the foregoing anecdotes illustrate, a susceptible public might fall for any half-baked therapy or nostrum if it was promoted with sufficient bombast.  Fuller, for example, devoted many pages of the Medicina Gymnastica to the curative powers of horse riding.  Up to a point he was attempting to be scientific, which was just as well, as he was claiming efficacy in the face of some pretty serious illnesses, including consumption.  But he also collected case histories of successful cures, of which the beneficiaries were “gentlemen” of one degree or another.  The idea, presumably, was that men of quality must be taken seriously, even when endorsing questionable beliefs.  But the most remarkable of Fuller’s case histories is the graphic account of his own experience of the violent “distemper” he conquered by taking to the saddle.

Fuller’s theories enjoyed an impressive longevity, and many years after his death in 1706 the Medicina Gymnastica was invoked in a newspaper advertisement in support of an extraordinary device, the “chamber horse”, which provided all the benefits of riding but in the comfort of one’s home.  The inventor of the chamber horse was purportedly a Henry Marsh of Clement’s Inn Passage in Clare Market.  In essence it was a solidly constructed wooden chair with a sprung seat, which bounced the occupant up and down in the manner of a horse, offering exercise as well as cure for illness.  Understandably it enjoyed a fashionable following, and in the early 1790s, more than half a century after Henry Marsh advertised his invention, Thomas Sheraton was publishing details of its construction in The Cabinet-Maker and Upholsterer’s Drawing-Book. 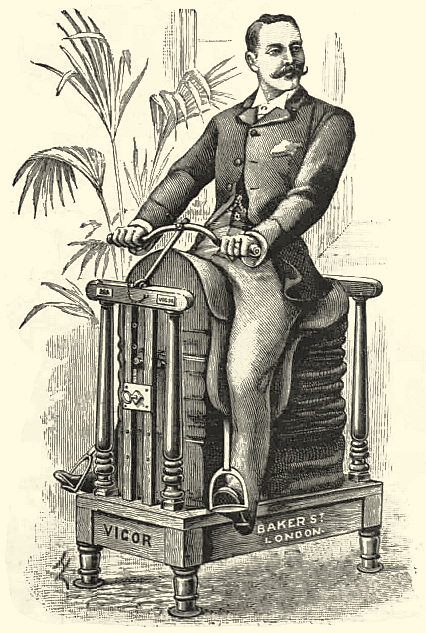 A CURE FOR ALL ILLS
But the chamber horse lasted way beyond the time of Sheraton.  Late in the nineteenth century Vigor & Co. of 21 Baker Street were selling a “perfect substitute for the live horse” that was little different from the earlier Georgian models.  Nor had the trumpeting of its benefits quietened, for Vigor’s Horse-Action Saddle 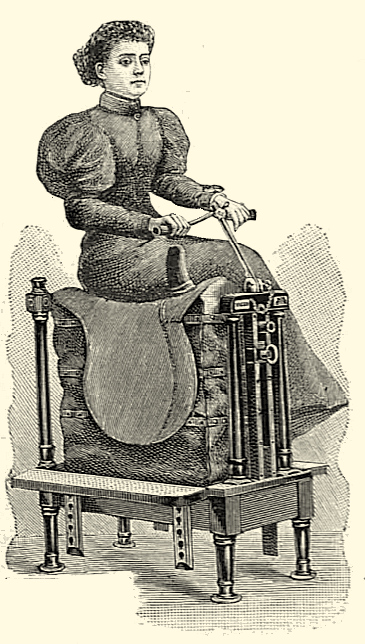 Advertisement for Vigor’s Horse-Action Saddle for women.  Image in The Sketch 24 July 1895.

For greater verisimilitude the horse was able to trot, canter and gallop.  A side-saddle version was available for the fairer sex, and Vigor & Co., who incidentally also sold home rowing machines and automatic disinfectant jars, boldly proclaimed that Princess Alexandra of Denmark was a satisfied customer.  Well, believe that if you will.  But the long history of the chamber horse—not to mention the somewhat shorter histories of the sugar plum and the anodyne necklace—goes to show that with sufficient ingenuity you can sell anything to anybody.

Trouble’s Afoot, or, The Rival Chiropodists of Regent Stree