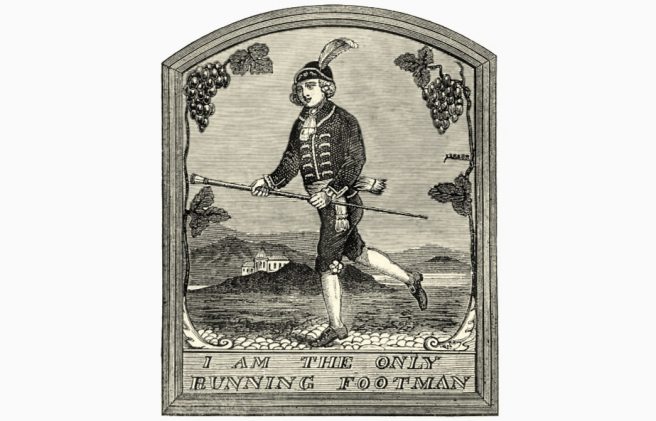 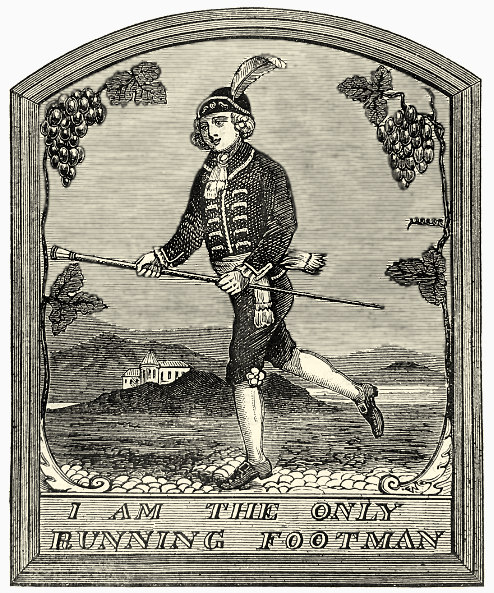 One of the more curious London tavern signs, which has now disappeared, depicted a chap dressed in a short jockey-coat and breeches, with a sash round his waist and a large feather in his cap.  He was carrying a staff of sorts with a metal ball at its top end.  He appeared to be running along a country road, and the expression on his face suggested that he was managing well.  The words I AM THE ONLY RUNNING FOOTMAN were written beneath the picture.  All very odd.

The tavern in question, the Running Footman, stood at the corner of Charles Street and Hayes Mews, at the western side of Berkeley Square in Mayfair.  The houses in this part of the capital belonged to wealthy families, and at one time or another the square was home to Horace Walpole, the 4th Marquess of Hertford and Lord Clive.  The servants who worked in these distinguished households would fraternise in the Running Footman. 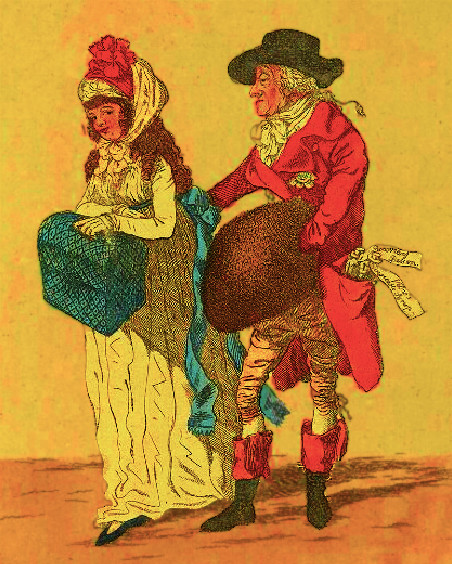 But what sort of servant was a footman anyway?  As the name suggests, he discharged his duties on foot, by running alongside or ahead of his master’s or mistress’s carriage.  John Evelyn, for example, travelling up to London from Sayes Court in 1652, sent his footman on to make arrangements, and regretted it when he was waylaid by two “Cutt-throats” near Bromley, and robbed of money, two rings and two costly buckles.  In ordinary circumstances, though, the running footman might carry messages, or help lift a carriage out of a rut or across a river, or simply advertise the traveller’s wealth and rank.

Naturally the running footman had to be in good shape, and a learned antiquary by the name of George Ashby believed that in peak form he might have covered up to sixty miles a day, scampering along at seven miles an hour.  He also needed a ready source of sustenance, and the metal ball on his staff, which was hollow with a screw top, held a little white wine.  His food—easy to transport—was a hard-boiled egg.  Yet it could not have been a healthy existence, and the Irish writer Melesina St George, witnessing a similar practice in Vienna, deplored such needless cruelty.  “They seldom live above three or four years,” she noted in her travel journal, “and generally die of consumption.”

All this appears to have ended at some point in the nineteenth century, for a reference to this “now extinct class of retainers” is made in an article in Notes and Queries in 1856.  (The staff with the metal ball survived as the long silver-headed cane that was the emblem of the more static footman of later times.)  The reason for the demise of the practice was that as roads improved, and as carriages bowled along at a greater speed, the running footmen simply could not keep up.

A record of the “chaise match” by James Seymour.  The terms of the wager were that a carriage had to cover nineteen miles on Newmarket Heath in under an hour.  Painting dated 1750.

THE MERCURIAL FOOTMAN
Even so, stories are told of heroic displays of athleticism.  Ashby noted that the 3rd Duke of Marlborough, Charles Spencer, raced his running footman in a carriage-and-four for a wager.  They started from London and finished at Windsor—a distance of about twenty-five miles—and the Duke only just won.  The wretched footman died soon after.  Then again a fellow called Choats, who had been in service, boasted in old age that he had once run the eighty-six miles from London to Lyndhurst in the New Forest in a single day.  And another fellow, whose name was Langham, completed a round journey of a hundred and forty-eight miles in just under two days, stopping off for the night.  He had taken a letter to a doctor in London—his noble mistress was lying on her sick-bed in Warwickshire—and returned with a bottle of medicine.  He was rewarded with a new suit of clothes.

But running footmen were appreciated for more than their speed and endurance.  The Irish actor and dramatist John O’Keeffe wrote of their elegant agility—“skimming or flying across the road”—with unabashed admiration:

one of them I particularly remember, his dress, a white jacket, blue silk sash round his waist, light black-velvet cap, with a silver tassel on the crown, round his neck a frill with a ribbon, and in his hand a staff about seven feet high with a silver top.  He looked so agile, and seemed all air like a Mercury: he never minded roads, but took the shortest cut, and, by the help of his pole, absolutely seemed to fly over hedge, ditch, and small river. 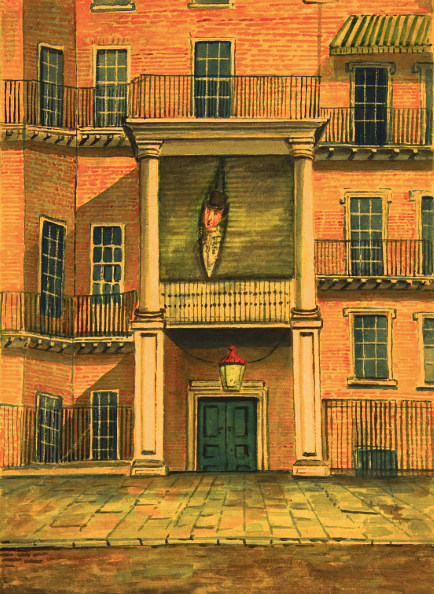 The 4th Duke of Queensberry’s house at no. 138 Piccadilly.  Anonymous nineteenth-century print.

ON HIS NOBLE BALCONY
All of which brings me to really rather a good story about a running footman.  Let me set the scene.  The time was the reign of, well, one of the Georges.  The place was Piccadilly.  The hero of the piece, as we shall see, was a man with no name.  (Or at least with no name known to us.  He was the quintessential Overlooked Londoner.)  Playing opposite him was William Douglas, the 4th Duke of Queensberry.

Now if the name “Queensberry” sounds familiar, no doubt it is in connection with Oscar Wilde.  And it was indeed a Queensberry who played a significant role in the great writer’s downfall.  The same Queensberry sponsored the regulations that came to govern the sport of boxing.  But he was the 9th Marquess—John Sholto Douglas—and not the 4th Duke.  The two were only distantly related, being cousins at several removes.

But like the 9th Marquess the 4th Duke was thoroughly disreputable.  Although he had a career of sorts as a politician, and was interested in music, he was more widely known as a voluptuary and a gambler.  In 1750 he won a wager, worth one thousand guineas, in what became known as the “chaise match”, although he bent the rules in order to pull it off.  He had a string of mistresses, at least one child, and no wife.  He came to be known as “Old Q”, a sobriquet that sounds more disrespectful than affectionate. 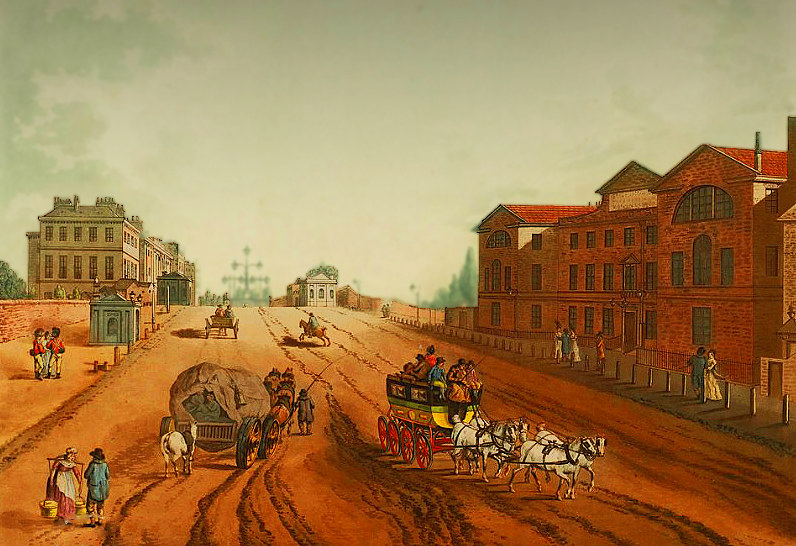 The house was at no. 138, on the corner with Park Lane.  A nineteenth-century print shows the balcony on the first floor, where towards the end of his life the Duke would sit watching the world passing beneath his feet, and making himself an easy target for the caricaturists.  The essayist Leigh Hunt described him with obvious distaste as

a thin, withered old figure with one eye, looking on all the females that passed him, and not displeased if they returned him whole winks for his single one.

Other squibs maintained that he would sit up on the balcony for eight or ten hours a day, and that he had with him at all times his head groom, John Radford, who would follow attractive women to find out where they lived. 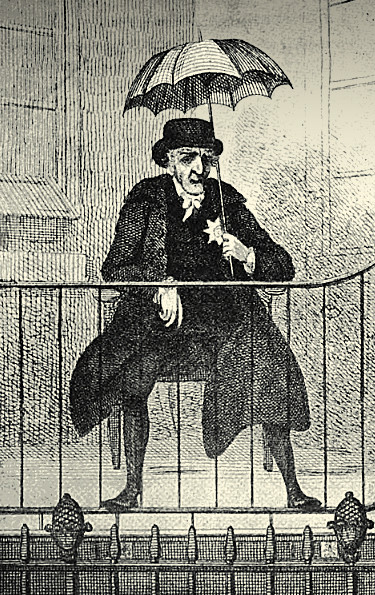 Caricature of the 4th Duke of Queensberry sitting on his balcony in Piccadilly.

And it was from this balcony that the Duke would supervise the testing of prospective footmen.  The test was very simple, and required the candidate to run up to the far end of Piccadilly and back.  But he would have to wear full livery, and he would be timed with a stop-watch.  Piccadilly, it should be pointed out, was not then what it is now.  In the Duke’s day it was not unlike a broad racecourse, along which carriages, and running footmen, could travel at speed.

Now on one such occasion a would-be footman performed particularly well in the Duke’s trial.  He stood beneath the balcony, still wearing the livery in which he had been dressed, in order to hear the verdict.  “You’ll do very well for me,” said William Douglas.  “And your livery will do very well for me,” replied the unidentified footman, having said which he set off running again.  This time, though, he did not run back.  Instead he got clean away, taking with him the beautiful costume he had been ordered to put on for the occasion.