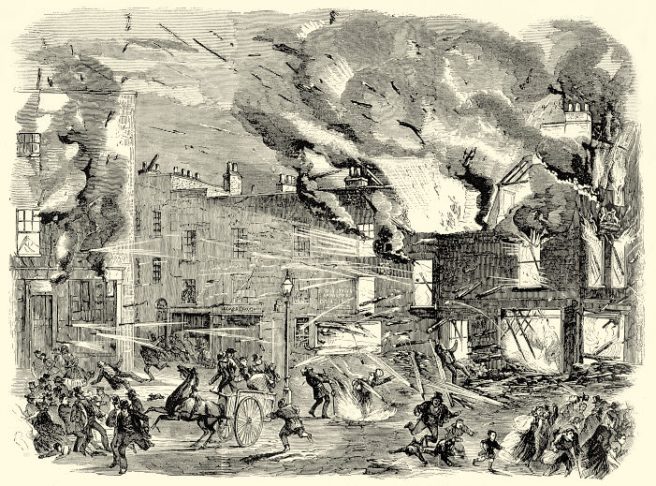 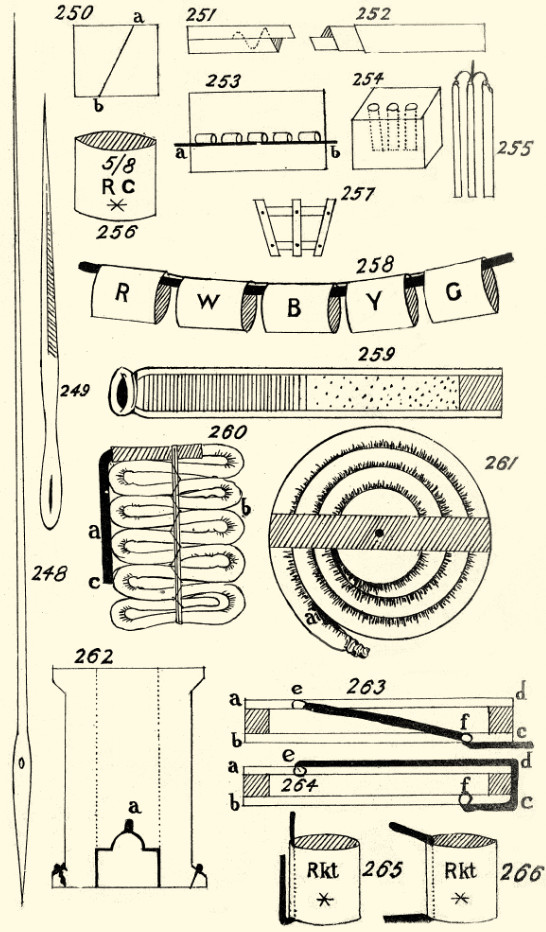 How to make a Victorian firework.  Item 261 is the sort of squib that features more than once in this story.  Image in Thomas Kentish The Complete Art of Making Fireworks (1887) figure 24.

On the 8th of November 1886, which was a Monday, a raggle-taggle mob of youthful defendants found themselves in the dock at the police court in Great Marlborough Street, just off Oxford Street.  The magistrate presiding over the proceedings was Robert Milnes Newton.  You may well recognise the name from the infamous trial of February 1895, when Oscar Wilde had the Marquess of Queensbury brought before the Marlborough Street court on a charge of libel.  On that occasion, too, Robert Milnes Newton was sitting in judgement.  But that is quite another story.

No, on that Monday in 1886 the defendants were of a very different stripe.  Far from being members of the English aristocracy, they were seven young London boys.  Seven overlooked London boys, quite literally, as their names have been nowhere recorded.  In fact in a report of the Marlborough Street proceedings that was published in the Illustrated Police News they were simply known by the numbers one to seven.

Their offences related to the day before their court appearance.  The 7th of November had been a chilly Sunday, the daytime temperatures in London remaining in single figures.  The city had been a lively place that weekend.  Socialists had held a number of meetings, and were planning a large gathering on the following Tuesday in Trafalgar Square.  A middle-aged Mrs Bobbit, who had been tragically shot by her husband Joseph on the previous Wednesday at their home in Highbury, was determined by the jury of an inquest to have died by misadventure.  And a number of incidents involving fireworks, starting in Carnaby Street, had disturbed the peace two days after the legitimate antics of Friday the 5th, and had landed the seven juvenile perpetrators before Mr Robert Milnes Newton of the Marlborough Street Police Court. 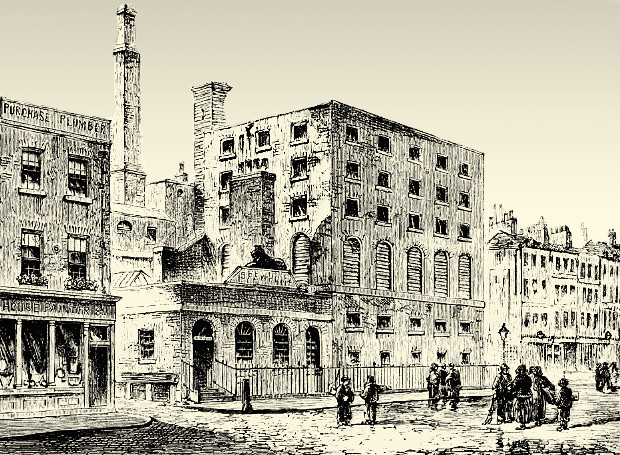 SOME OTHER BOY
Carnaby Street, which runs south from Great Marlborough Street to Beak Street, was not in 1886 what it was in the Swinging Sixties, nor for that matter what it is today.  In the late nineteenth century it had none of its later reputation as a fashionable shopping precinct.  In fact it had been laid out on the site of a seventeenth-century plague hospital, and for much of its subsequent history it had been home mainly to commercial properties.  In the 1886 Post Office directory we find an assortment of tradesmen and craftsmen ranging from bakers and dairymen to a whip mounter and a leather gilder.

Now on the evening in question—Sunday the 7th—three elderly women were standing in Carnaby Street.  Along with just about all the other characters in these stories, they were never named by the newspapers.  But although we do not know their names, we know what would have happened to them had it not been for the quick thinking of a passer-by, who was presumably a bobby on the beat.  And what that bobby had spotted was a boy placing a lighted cracker on the pavement right behind his three victims.

The next day, when questioned by the magistrate, the juvenile defendant, known to the world only as Boy Number One,  denied having played any part in the incident.  “I was in church,” he declared.  Robert Milnes Newton was not impressed, and demanded to know who in that case had let off the cracker.  “Some other boy,” said Boy Number One.  Dismissing this plea, and observing that he ought to be well whipped, Newton ordered the defendant to pay a one shilling fine. 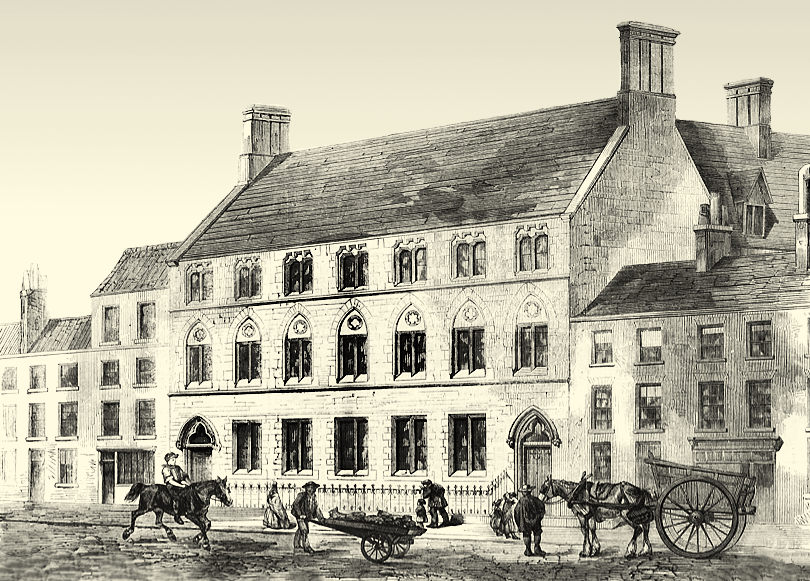 The church of St John the Evangelist.  Not far off was London Street, the scene of a further misdemeanour.  Image in The Illustrated London News 26 May 1860.

A WICKED ACT
Turning his attention to Boy Number Two, Newton found himself talking to another avowed churchgoer.  The church in question was St John’s—possibly the St John’s that once stood near Fitzroy Square.  The charge was “throwing a firework under the wall” of the church during the evening service.  Like Boy Number One, Boy Number Two put in a plea of mistaken identity.  Asked by the magistrate what had happened, he said that some other boy had lit the firework.  He himself had merely picked up the match.  “The match was alight,” he said, “and so the constable nabbed me.”  He too was ordered to pay a one shilling fine.

Boy Number Three and Boy Number Four were accused of being partners in crime, and, in common with Boy Number Two, of having thrown a lighted squib into a building.  We are told nothing about the building other than that it was a public house.  This is very alarming, as a public house, like a church, would have been pretty crowded.

The constable who had made the arrest had an interesting tale to tell the court.  On the Sunday evening he had noticed a group of boys—five or six in number—acting suspiciously.  On going to investigate he was startled by the repeated crack of fireworks.  “We never had none of the fireworks,” declared the defendants.  Brushing this aside the magistrate ordered the constable to proceed with his evidence.  “I swear,” said the peeler, “that he threw the squib into the public house.”  He was pointing at Boy Number Three.  Then he pointed at Boy Number Four.  “And he encouraged him.”  “This was a wicked act,” said Robert Milnes Newton.  Having said which he fined Boy Number Three two shillings six and Boy Number Four one shilling. 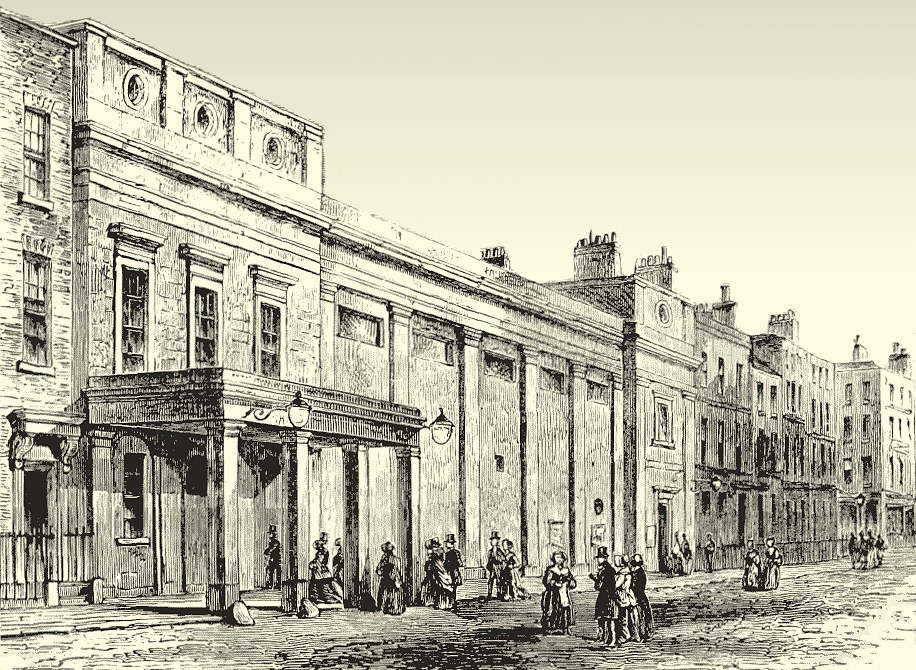 A SELECT AND FRIGHTENED PARTY
We will come to Boy Number Five, whose alleged crime was the most serious, in a minute.  But first, Boy Number Six and Boy Number Seven.  The former was fined a shilling for supposedly tossing a lighted squib down into a basement area in London Street—near Fitzroy Square—and all but “frightening into fits” a “select party” who were busy with their tea.  The latter was let off with a nominal fine for a firework offence just to the north of Oxford Street in Rathbone Place.  “I only picked up the case,” he protested.  “The case was empty.”  “Then you ought to have put your foot on it,” Newton pointed out, “instead of throwing it about.”

To return to Boy Number Five.  He was found to be “a very serious offender” by the magistrate, and the dim view taken of his behaviour took the form of a five shilling fine.  The scene of the crime was Tottenham Street, a thoroughfare linking Cleveland Street to the west and Tottenham Court Road to the east.  And it was there that he was being pursued by a constable.  Precisely why he had a constable hot on his heels is a mystery: probably it involved fireworks.  But it was what happened next that really landed him in trouble.  For he stopped dead in his tracks, turned, and thrust a lighted squib into the face of his pursuer.  Even at a safe distance we are no less shocked than the reporter who wrote, rather sombrely, that the boy had “nearly singed off the whiskers” of the luckless constable. 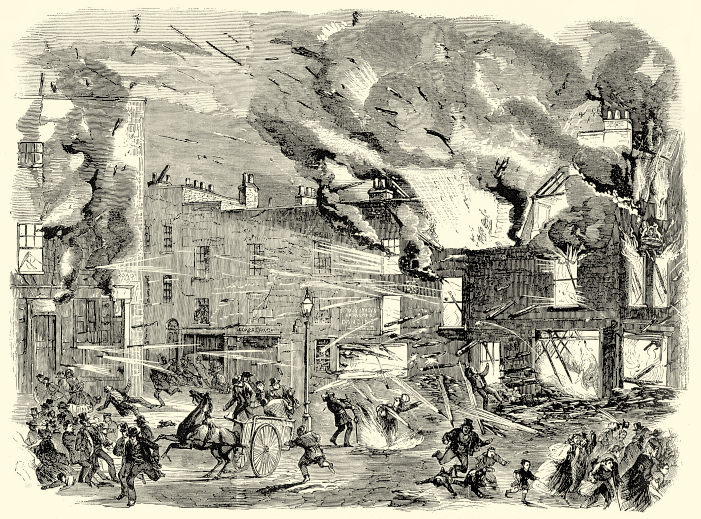 The terrible explosion at Madame Coton’s fireworks factory in Lambeth in 1858.  Image in The Illustrated News of the World.

LIGHTING THE BROWN PAPER
What is most extraordinary about the assault on the policeman is that it was not an isolated incident.  In fact on the same day as the Marlborough Street hearing a newspaper reported a similar story, the chief differences being that all parties were triumphantly named, and that the protagonist was not a young scamp from the streets of the capital.  Far from it.

The fellow in question was one Henry Rich.  He was thirty-seven years old, and, given that he was an “independent gentleman”, he was aptly named.  At half-past seven on Guy Fawkes Night—the Friday before the Sunday of the earlier stories—Rich caused a commotion by letting off fireworks in the Seven Sisters Road.  A Constable Bennett of the Tottenham division tracked him down to a public house—the Eaglet—and found him propping up the bar.  He was very much the worse for wear.  When Bennett stepped forward, planning to take him by the scruff of the neck, Rich took a cracker from his pocket, lit it, and threw it in front of the approaching constable.  Unceremoniously removed from the premises, he let off another cracker in the street, which was too much for Bennett, who took him into custody.  The whole sorry episode cost the young gentleman a trip to the Clerkenwell Police Court and a fine of five shillings—a high price for a single evening’s entertainment.

Such stories could be multiplied without difficulty.  The same newspaper article grimly reported on squibs thrown at horses, blazing barrels, and so on and so forth.  Nor is there anything special about the year 1886, and a quick trawl of the Victorian newspapers reveals that fireworks were a regular threat to life and limb.  Life?  Certainly, if you include the explosions in fireworks factories, which were often unregulated back-room operations, and fatal injuries inflicted by falling debris.  Stand back! stand back!—good advice indeed.