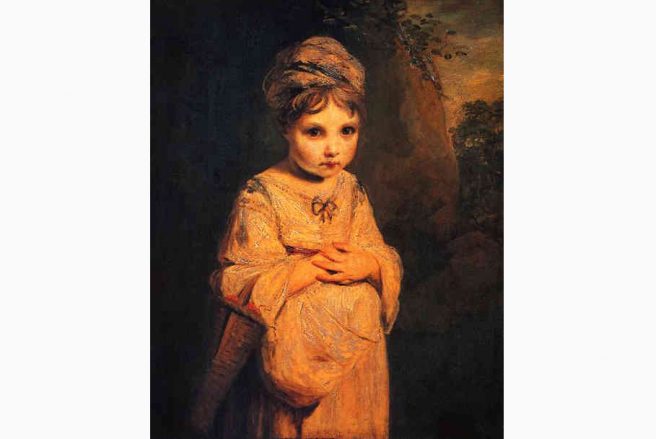 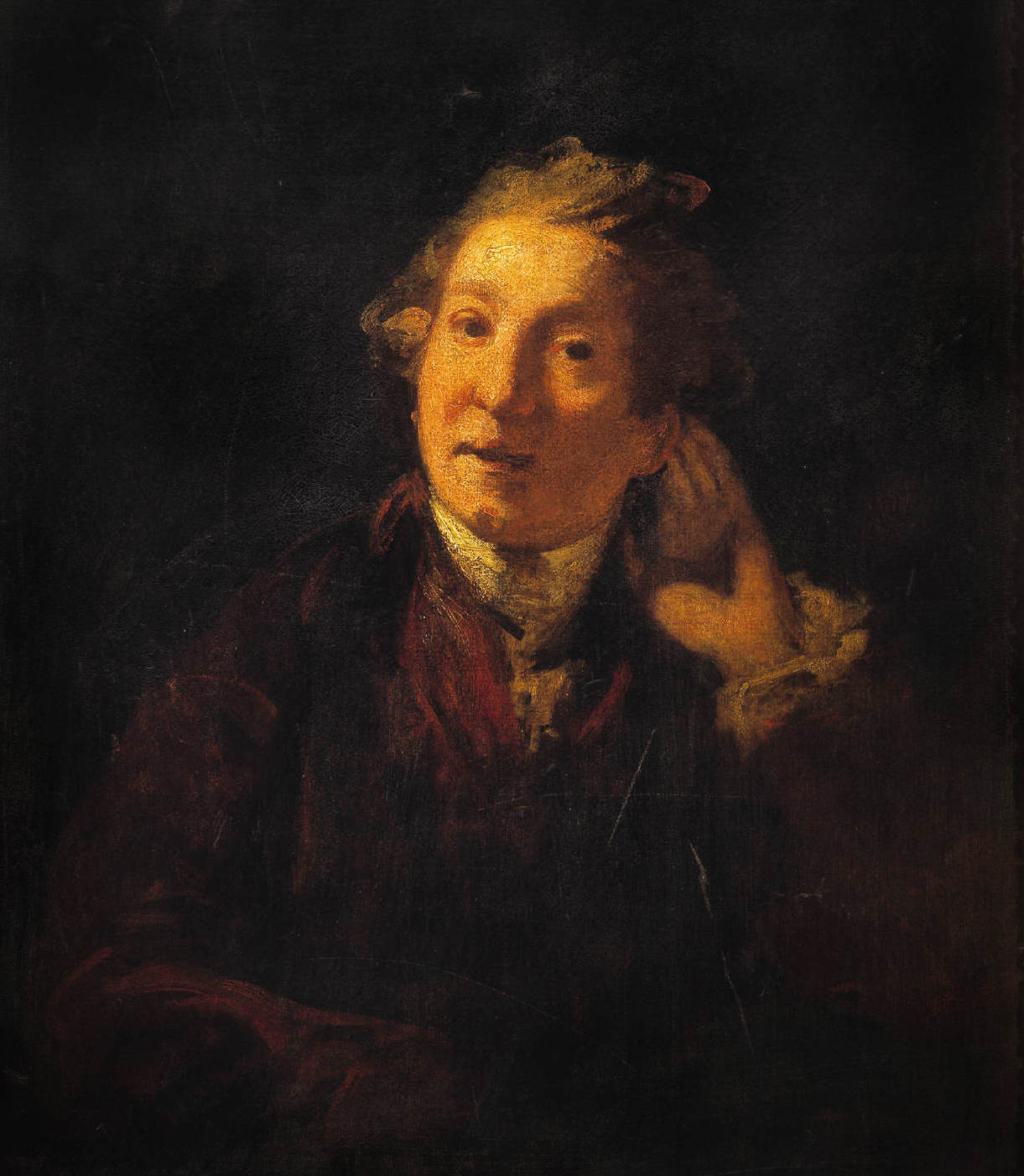 Self-portrait of the Artist as a Deaf Man by Joshua Reynolds.  The painting is dated to the period 1773 and 1777, and is therefore contemporary with The Strawberry Girl.

Readers of this blog with an interest in art may well remember that this question was raised in an earlier piece on Sir Joshua Reynolds’s delightful picture The Strawberry Girl, which hangs in the Wallace Collection at Hertford House in Manchester Square.  We stated there that the identity of the great artist’s young subject has long been shrouded in mystery.  Now, however, we may be able to shed new light on the matter.

But first we must thank a correspondent who recently contacted us with two remarkable pieces of information.  The first was that the strawberry girl may well have been a child by the name of Sarah Margaret Edwards.  The second was that Sarah Margaret Edwards was her ancestor.  What a wonderful thought!  London Overlooked simply had to investigate.

CROSSING OFFY OFF THE LIST
There was a time when art historians believed that Theophila “Offy” Palmer was the strawberry girl.  The theory no doubt reflected the fact that Offy was the daughter of Reynolds’s sister Mary Palmer, a writer who lived in Great Torrington in the family’s native Devonshire.  Uncle and niece were devoted to one another, and Offy is the acknowledged subject of several portraits.  One of these, in which Offy is depicted carrying a scarlet muff, bears a striking resemblance to The Strawberry Girl, both in the general composition and in the facial features.  Although the two paintings are portraying different stages of childhood, one might readily suppose that the sitters were one and the same girl. 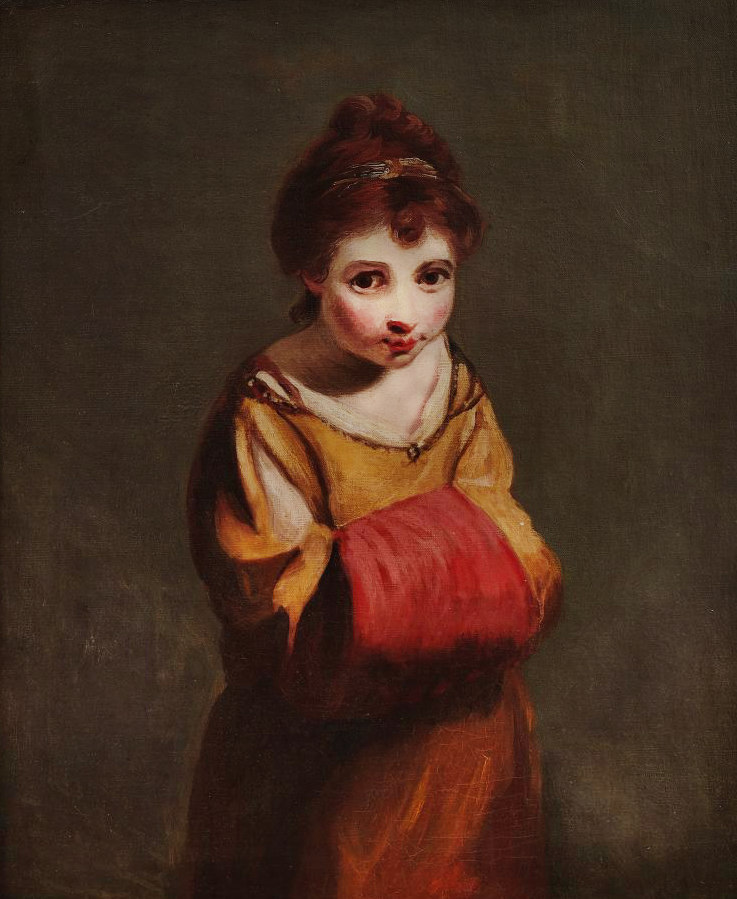 However, Offy was born in 1757, and, as the first written reference to The Strawberry Girl is in the catalogue that accompanied the Royal Academy exhibition of 1773, the identification does not hold water.  Offy would have been fifteen when the picture was exhibited at the Academy’s rooms in Pall Mall, and yet the little girl with her pottle of fruit is clearly not that old.

Could it be that Reynolds has portrayed Offy rather whimsically as a much younger child?  Not impossible but not particularly plausible.  A fifteen-year-old would not want to be infantilised in this way, and in any case there are two other possibilities.

A CHILD WITH NO NAME
One is that the identity of the strawberry girl is lost for good, because she was one of the street children Reynolds regularly painted at his house in Leicester Fields, in which case even he may well have had no idea who she was.  In the records he kept she would have appeared simply as a “girl” or a “child”.  James Northcote, a pupil, remembered that his old master “was for ever painting from beggars”.  He could tell them exactly what to do, and was therefore able to concentrate, whereas his grander sitters no doubt expected to be entertained.

The other possibility, and certainly the more attractive of the two, is that the little strawberry girl is Sarah Margaret Edwards, as stated above.  And there are good grounds for believing that this is the case, for a portrait of her by Reynolds, which was exhibited at the Crystal Palace in Sydenham in December 1882, was described as “a child with strawberries”. 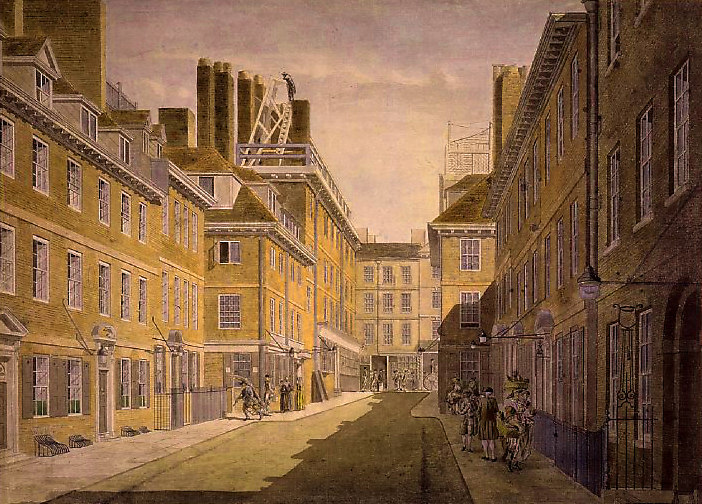 A CHILD WITH A NAME
Sarah Margaret was the daughter of Samuel and Sarah Edwards.  Her precise date of birth is not known, but she was baptised on the 14th of December 1771 in the parish of St Clement Danes, and we may reasonably assume that she had been born in the same year.  And if you have spotted something odd about Sarah’s age, then rest assured that we will return to this shortly!

Samuel was a wine merchant.  Such at least was his occupation in 1781, some ten years after Sarah Margaret’s birth, when he is listed in Kelly’s London Directory.  He would then have been in his early forties.  His wife, Sarah Robinson, was much the same age, and they lived at 5 Beaufort Buildings on the south side of the Strand.  In the space of about twelve years they had nine children—three sons and six daughters—of whom Sarah Margaret was the oldest.  Two of these children—John Samuel and Jane Jemima—died in infancy. 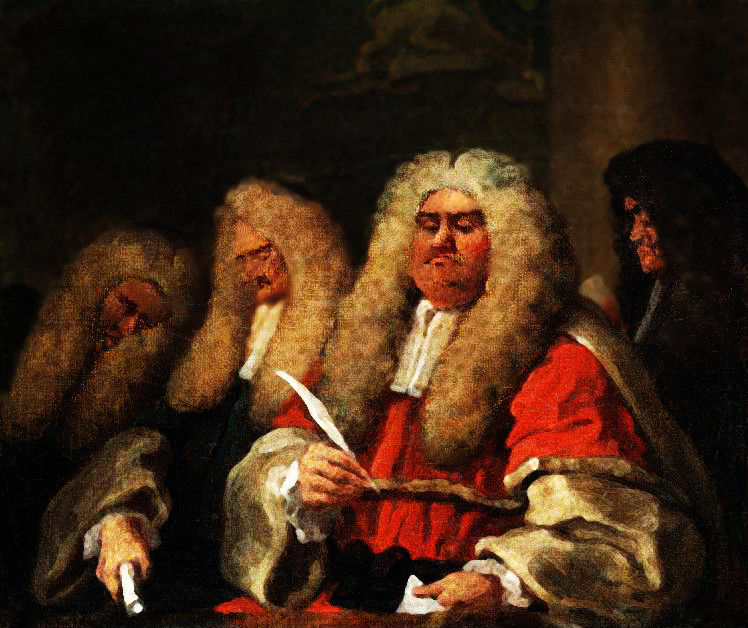 The Bench by William Hogarth.

Samuel must have enjoyed a fine reputation as a businessman, as a record survives of a delivery of wines to a Lord Walsingham in Norfolk.  But he was also—and importantly for our story—a man of artistic tastes.  We know, for example, that Hogarth’s The Bench was in his possession for a time.  Two of his wife’s siblings, Elisabeth and Mary, married artists, namely Henry Pars, a draughtsman who ran a drawing academy in the Strand, and Thomas Lindsay respectively.

Now The Bench is significant.  Previously it had been owned by Sir George Hay, a prominent lawyer and politician, but also a bon viveur whose dealings with the wine merchant of Beaufort Buildings may have gone beyond a shared interest in art!  The two men clearly enjoyed a degree of closeness, for Hay, who never married, was Sarah Margaret’s godfather.  He was the eponym of her brother, George Hay Edwards, and he was sole executor of her father’s will.  He was also afflicted with insanity, and one day in the autumn of 1778, when he was sixty-three years of age, he walked out into the Thames near his home in Battersea.  Fifty passers-by saw him wade out into the water up to his chin, but by the time help arrived he had plunged his head under the surface, and drowned. 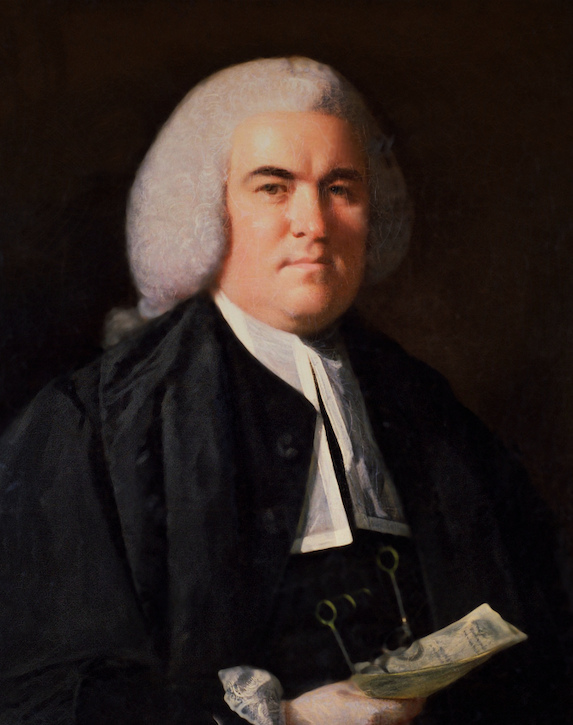 What a terrible end.  On a happier note, though, Hay was painted by Reynolds, and it is easy to imagine that he also commissioned the portrait of his goddaughter.  But—and this is the oddity mentioned above—Sarah Margaret could not reasonably be the strawberry girl Reynolds exhibited at the Royal Academy.  She was born in 1771 and the exhibition was in 1773.  On the other hand, Reynolds is known to have produced many repetitions of the picture, and she could well be the girl he painted in 1778, when she would have been about seven years old.

But how did the “child with strawberries” find its way to the Crystal Palace more than a century later?  The key to this mystery lies with another member of Sarah Margaret’s family, Samuel Valentine Edwards.  He would be born many years after her—in 1807—and he was her nephew.

THE FAMILY GALLERY
Samuel Valentine Edwards had his share of personal misfortune.  His mother, Betty Eccles, died when he was only eighteen, and he was twice a widower.  But he lived to a great age, and in his professional life as a clergyman he did good work first as a vicar in Newnham in Hertfordshire, where he resided in a handsome parsonage, and then as chaplain of the Central London District School in Hanwell in Middlesex, where he gave religious instruction to workhouse children.  On his death in 1891 he left a tidy personal estate of over ten thousand pounds.

The Crystal Palace in 1871 by Camille Pissarro.

And he it was who lent the Reynolds portraits of George Hay and Sarah Margaret Edwards to the Crystal Palace exhibition.  We do not know exactly how he came to own the picture of Sarah Margaret.  But we do know that the other picture was acquired by George Hay Edwards, and that on his death it was bequeathed by his widow to Samuel Valentine.  Possibly the portrait of Sarah Margaret joined Samuel Valentine’s family gallery—he also owned portraits by Zoffany of his grandparents Samuel and Sarah—in a similar manner.

These details appeared in a newspaper account of the Crystal Palace exhibition.  As long as we are right in our assumption that “child with strawberries” could only be a description of The Strawberry Girl, then at long last we have an identification.  Sadly—appropriately?—the portrait of Sarah Margaret then disappears from sight.  Like the original version, hanging in the Wallace Collection, it has faded.  Life has imitated art. 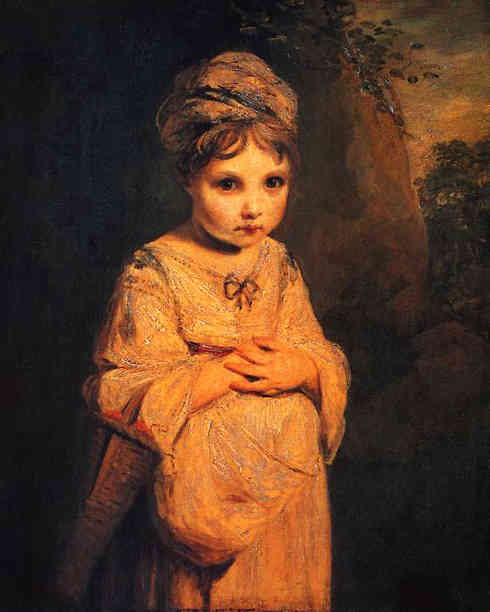 The Wallace Collection version of The Strawberry Girl by Joshua Reynolds.

STANDING THE TEST OF TIME
But the real Sarah Margaret did not vanish so quickly, and when she died in 1858 she was well into her eighties.  She had married a Hugh Totty, who, in common with her nephew, was a clergyman.  They died within seven months of one another, and the brief entry in The Gentleman’s Magazine records that Hugh had been chaplain to George the Fourth as well as rector of Etchingham and vicar of Fairlight, both in Sussex.  He lived to be a hundred and one, and this impressive achievement might be judged a fitting conclusion to a tale in which so much of the talk has been about the passage of time!

SOURCES
I owe the identification of Sarah Margaret Edwards with the subject of Reynolds’s The Strawberry Girl to Helen Cooper Grace.  Helen, who is descended from Sarah, kindly advised me of the report on the Crystal Palace art exhibition in The Norwood News, dated the 23rd of December 1882.  For the life of Reynolds I have used the standard biographies.  Other sources include the Wallace Collection catalogue, and the genealogical records on the Ancestry website.