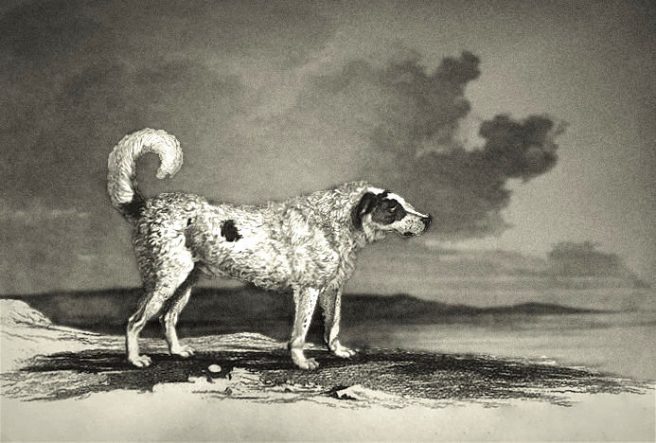 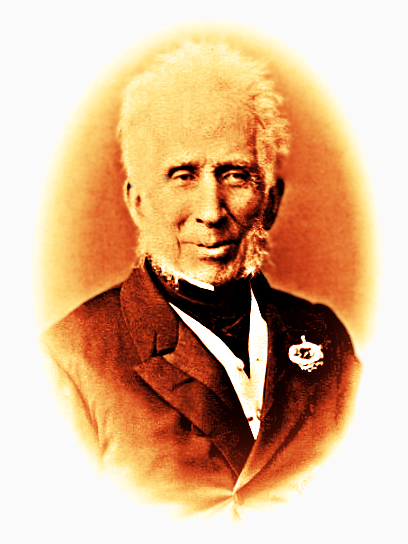 There is rather a good story about a missionary and his dog.  We feel it fully qualifies for inclusion here, as it is a nineteenth-century story with a London connection.  Aside from the two protagonists—the human and the canine—there is a ship and a ship’s captain and a hospital.  The joy of the story lies in part in the connections between these unlikely narrative elements!

But first a word on its source.  The true fons et origo was William Scott, who was elevated to the peerage as Baron Stowell by George IV for his services to the judiciary.  However, it was first written down not by Scott but by Edward Jesse, and Jesse clearly liked the story, for he wrote more than one version of it.

He was a writer on natural history, and, as well as editing Izaak Walton and Gilbert White, he published a little series of books with titles like Scenes and Tales of Country Life and An Angler’s Rambles, in which he set down his many thoughts on the characteristics of animals.  They are heavily anecdotal, which lends them charm, even if it denies them scientific rigour.  Jesse was at one time deputy surveyor-general of the royal parks and palaces, a position that must have suited him down to the ground, as it were.  But at one time or another he had also been a government clerk, a secretary to a president of the Board of Control, and a commissioner of hackney coaches.  Quite a life.

Of course, what interests us most is Jesse’s passion for dogs, another example of which can be found here.  He collected his material from many sources, and published it as Anecdotes of Dogs, devoting each chapter to a particular breed.  The themes are perhaps rather predictable—loyalty and affection, courage and intelligence—but taken together they add up to a delightful anthology.  The engravings, in which a mastiff or a St Bernard or a Scotch collie towers over the landscape, are minor masterpieces.  They are heroic portraits of a sort of canine aristocracy.

Portrait of a Newfoundland dog.  Image in Edward Jesse Anecdotes of Dogs (1846) page 103.

THE SNOWS OF NOVA SCOTIA
Back to the story, though.  The protagonist, Edward Wix, was an English clergyman.  His father, Samuel, was a controversialist with strong published views on such matters as capital punishment, which he opposed.  He was also an ordained minister, and in practising his vocation he had as it were shown his son the way.

Whereas Samuel confined his activities to the home front, Edward fought abroad, and in his twenties he went out to Canada in the service of John Inglis, who was Bishop of the Diocese of Nova Scotia.  As Archdeacon of Newfoundland he was first in Halifax, and then in Bonavista, and finally, in 1830, in St John’s.  In the journal he kept for the year 1835 he described his missionary work among the local “Indian” population.  He also made a number of references to his dog.

Sadly, we never learn the dog’s name.  But it was a faithful companion, enduring much as it followed its master on his perilous journeys in the wintry Nova Scotia landscape.  On one such trek, which proved to be more than usually arduous, the dog succumbed to fatigue.  On another occasion a tree felled by Wix to feed a camp fire all but killed it.  Wix certainly admired the hardiness of the native breed—the Newfoundland, naturally—and it is easy to see why.

When Wix left Nova Scotia, and sailed back to England, his trusty helpmeet went with him.  If any dog ever suffered the exquisite pain of homesickness, it was the Archdeacon’s dog, watching the coast of eastern Canada grow dimmer on the retreating horizon.  The journey that lay ahead was three thousand miles.  The North Atlantic was grey, and infinitely sad.  And the dog, as Edward Jesse pointed out, had never before travelled beyond its native land. 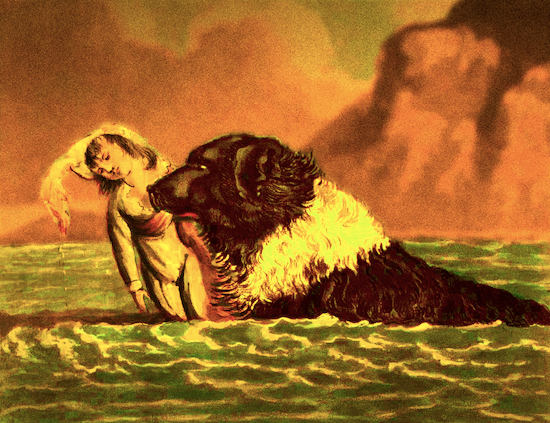 Carlo to the rescue in a scene from The Caravan.  Aquatint dated 1804.  © Victoria & Albert Museum

A THEATRICAL INTERLUDE
Jesse, like Wix, admired the Newfoundland breed.  In the Anecdotes he heaps praise on it, and, although he cannot quite rank it above the Irish Wolfhound, it comes a close second.  Among its other fine qualities it has a keen sense of impending danger and a willingness to defend the life of its master at the risk of its own.  Endowed by nature with webbed feet—“very much like those of a duck”—it has saved many a seafarer from a watery grave.  “Some dogs delight in following a fox,” says Jesse, who of course was writing for a nineteenth-century readership, “others in hunting the hare, or killing vermin.  The delight of the Newfoundland dog appears to be in the preservation of the lives of the human race.”

Jesse had examples up his sleeve, but really he had no need of them, for the Newfoundland already enjoyed a reputation for saving those in danger of drowning.  In 1804 a melodrama with the title The Caravan; or, the Driver and his Dog was staged at the Theatre Royal in Drury Lane.  The dog of the title was a real dog—a Newfoundland—by the name of Carlo.  When Carlo appeared to save a drowning child from a lake, the child, like Carlo, was real.  The water was also real—the producer, Frederick Reynolds, had “latterly been amusing himself with water-works”—although the lake was perfectly artificial.  A tank had been built into the stage, and the child was a “water boy” hired for a modest fee and a glass or two of brandy.  Depending whose theatrical memoirs you read, the dog belonged to the stage-manager, a fellow by the name of John Bannister, or to a man who ran a beef shop.  There was also a rumour that the dog was not a Newfoundland but a mastiff.  People were scandalised.

However, Wix’s Newfoundland was not destined for the London stage.  Indeed, one wonders if Wix had any destination for it in mind, for when the ship docked at Blackwall, and he disembarked with his family, he left the dog on board in its kennel.  But histories, as Pope once wrote, are “more full of examples of the fidelity of dogs than of friends,” and we may well suspect that this particular history does not end there. 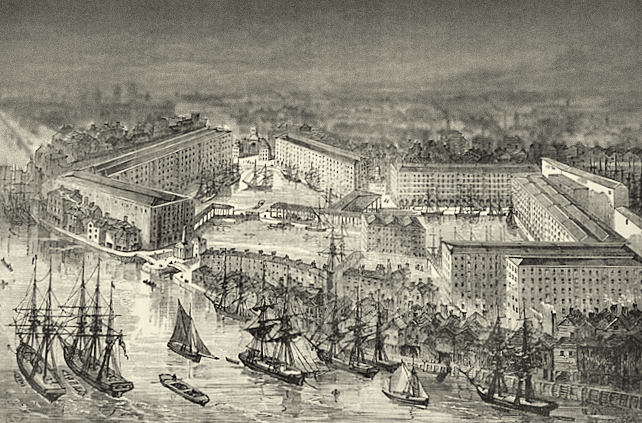 THE MAZY HOLBORN STREETS
A few days later Wix returned to the ship to make arrangements regarding his luggage.  By now the ship had been moved upstream to St Katherine’s Docks, and Wix went out to it in a Thames boat moored on the south bank at Borough.  He still had no plans for his dog, and so, his business concluded, he climbed back down to the river boat, with, as one may well suppose, the accomplice of his many adventures whimpering in its confinement after his beloved master.

Was it with a heavy heart that Wix was borne away without his faithful hound?  We would certainly have it so.  But even if man had given up on dog, dog had not given up on man, and the indomitable Newfoundland, somehow freeing itself from its prison, jumped overboard, and swam after the river boat as it made its way back to Borough.  The first Wix knew of it was when the dog, its coat dripping wet, caught up with him in Tooley Street.

One hopes that Wix was more pleased than annoyed to see his dog.  At any rate he let it tag along as he walked over London Bridge and through the City to visit his father, Samuel, who at the time was the resident chaplain of St Bartholomew’s Hospital.  The dog waited obediently in the hospital courtyard, and then, when Wix emerged from his father’s house, it tagged along again as he headed off on the next bit of business, which took him through the mazy and menacing streets of Holborn. 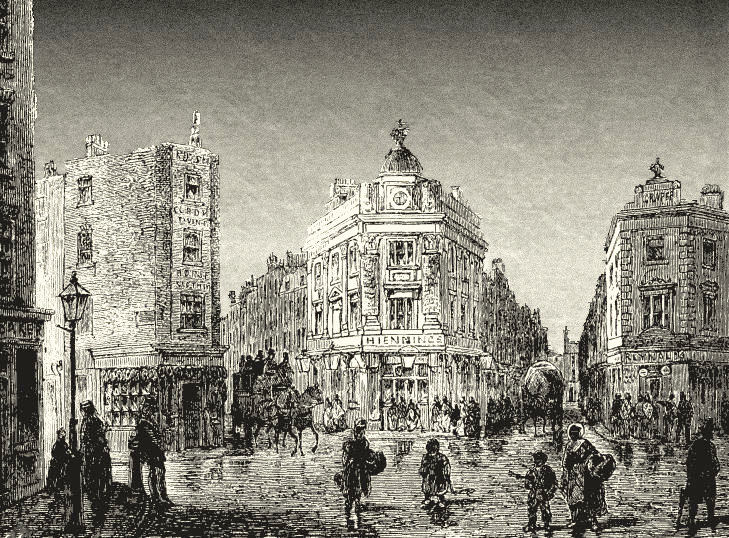 The mazy and menacing streets not of Holborn but of nearby Seven Dials.  Was it here that Wix and his dog became separated?  Image in Edward Walford Old and New London volume 3 page 198.  For another Seven Dials story, press here.

A FINE DOG INDEED
On reaching the other side of Holborn, Wix looked round, and to his horror realised that the dog had disappeared.  As he poked his nose into one alley after another in search of his lost companion, he understood the significance of a number of recent odd encounters.  Men had come up to him—men he had never met before—to comment on the dog trotting at his heels.  “Sir, that is a fine dog indeed!” one would say.  “It must be worth a great deal!” another would add.  At the time he had thought nothing of it.  Now he concluded that the dog had not strayed off into some dingy passage after all.  No, the dog had been stolen.

Greatly saddened, Wix went on his way.  But he had not entirely given up hope, and he sent word to the captain of the ship.  He also made up his mind to go back to the hospital in the morning.  There was still a chance that the dog had not been stolen but had retraced its steps back to some earlier port of call.

And although he did not know it, he was right, for late that evening the dog suddenly appeared at the gates of St Bartholomew’s Hospital.  Some instinct told it that its master was inside—of course his master was not inside—and it howled for him unhappily.  The night watchman drove it away, and when Wix arrived next morning the dog had gone. 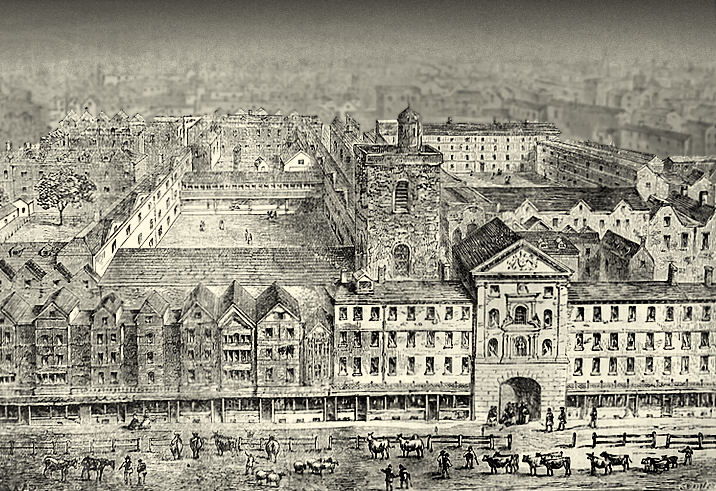 And now a miracle.  Two days later Wix received a message from the docks.  Hurrying back to the ship, he found the captain, and, waiting patiently in its kennel, his dog.

The captain told him a remarkable story.  Looking out from his ship, he had seen the dog just below him, bobbing up and down in the water.  Evidently it had made its way from the hospital right through the City and back over the bridge.  Then it had jumped into the river.  And guided by nothing other than intelligence and affection—for what scent could there be in the river?—it had identified the ocean-crossing ship on which it had shared its master’s latest grand adventure.

AND AFTERWARDS
And afterwards?  The sagacious Newfoundland was in due course sent to live with Wix’s uncle, one Thomas Poynder.  Poynder was Treasurer of Christ’s Hospital.  More to the point, he lived in Clapham, hard by the Common.  With acres of open land on the doorstep, the dog might be said to have arrived.

Then again, given that it had arrived in England from Nova Scotia, we might prefer to say that the dog was now a very, very long way from home.