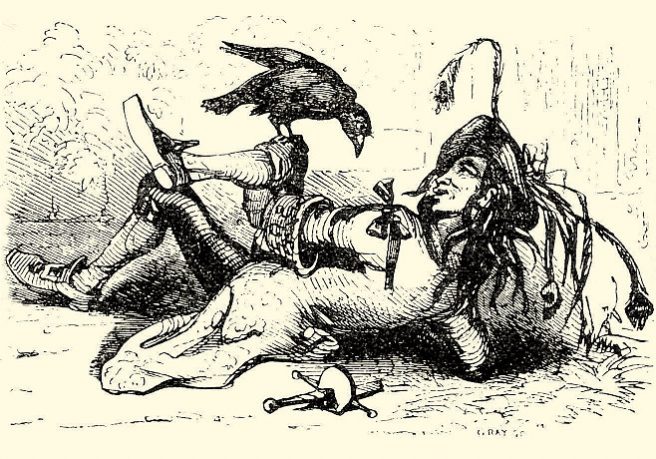 Aficionados of Charles Dickens will recall that a key character in Barnaby Rudge, which was published in 1841, is a talking raven by the name of Grip.  Perhaps it is stretching the definition of “overlooked Londoner” to celebrate a bird in this blog, but the story is so peculiar that it has slipped past editorial control. 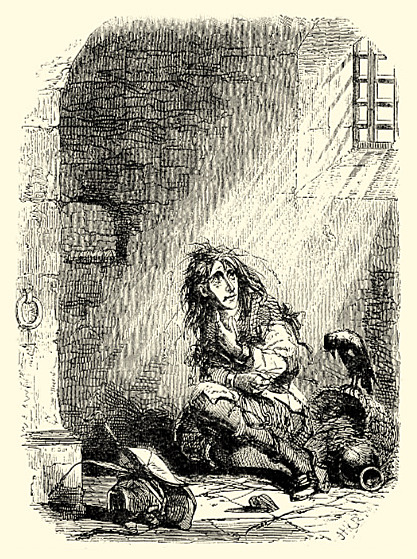 Barnaby Rudge in Newgate Prison, with Grip the raven.  Illustration by Hablot Knight Browne, otherwise known as “Phiz”, in the 1897 edition of Charles Dickens Barnaby Rudge.

In his preface to Barnaby Rudge Dickens reveals that the fictional Grip was based on two real ravens.  The first was the model for Phiz’s illustrations in the first Cheap Edition of the novel, and Dickens, who at the time was living at no.1 Devonshire Terrace, near Regent’s Park, loved it dearly.  But in the spring of 1841 it suffered an untimely death, a loss that Dickens would have us believe left him inconsolable.  He broke the news to his friend, the painter Daniel Maclise, in a letter sent in an envelope with an enormous black seal.  The raven had in fact been ill for some time, and in spite of (or because of) the attentions of a local veterinarian by the name of William Herring, who fed it quantities of castor oil, it went into a steady decline.  Talkative to the end, its final croak was “Halloa old girl!”, which, as Dickens explained to Maclise, had been its favourite expression.

Dickens’s house at no.1 Devonshire Terrace.  Illustration by Daniel Maclise in volume 2 of John Forster The Life of Charles Dickens (1876) page 119.

In the same letter Dickens paid Grip the tribute of a fine obituary, noting that the raven “behaved throughout with a decent fortitude, equanimity, and self-possession, which cannot be too much admired”.  There and elsewhere he wondered about the cause of death.  The chief suspects were a local butcher who had once threatened to poison Grip in retaliation for an attack on his trousers, followed closely by a carpenter who bore a grudge for some tool—a clasp knife or a hammer—which he believed the raven had stolen.  In the end the corpse was removed in a covered basket for a post mortem examination—actually to be stuffed—which cleared the names of the two workmen.  Death had in fact been brought about either by the lead-based paint the raven had ingested in the garden stable where it lived, or, more prosaically, by ’flu. 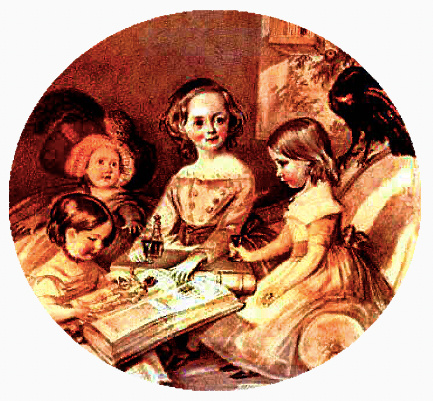 Portrait of the Dickens children by Daniel Maclise, dated 1841.  Grip can be seen at the top right of the picture.  © Charles Dickens Museum

Dickens thought of the death of the raven as a bereavement.  His wife Catherine was also upset, but the children seemed rather pleased, because, or so their father believed, the bird had pecked their ankles.  And in case we take the whole melodrama too seriously, we should note that Maclise certainly detected more than a hint of playfulness in his friend’s sombre letter, and that he dashed off a sketch of the ascent to heaven of the dead raven’s soul.

A VERY FAMILIAR BIRD
Grip had two successors.  The first insisted on digging up the many odds and ends its predecessor had buried in the garden, and was looked down on by Dickens as, well, bird-brained.  The second, bought for him by his friends the Smithsons from the landlord of a Yorkshire tavern, was older and larger.  Dickens considered this third raven superior even to the first—it had an entertaining habit of swallowing and regurgitating door keys and cracking window panes with its beak—but he was less enthusiastic later on when it began to flop about and pluck at its feathers.  (Suspicion fell on the venomous butcher again.)  Nor was the Smithson’s young daughter, Eleanor, impressed.  She likened the raven in its rough speech to a street-arab, and commented, rather starchily, that it “greeted me with ‘Halloa, old girl!’, made some alarming pecks at my ankles”—the same complaint that the Dickens children had made—“and altogether was unpleasantly familiar.” 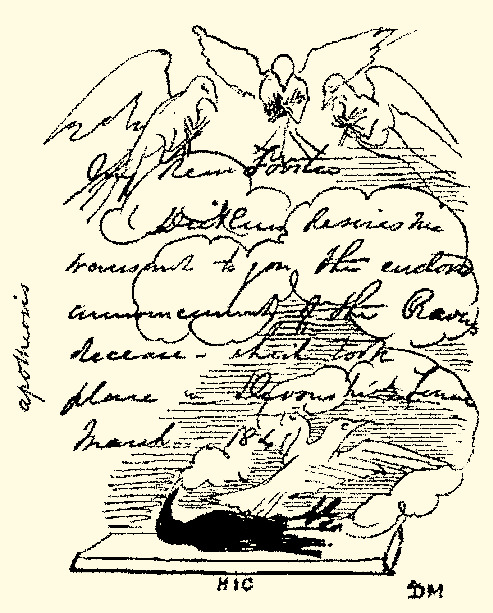 Apotheosis of Grip.  Sketch by Daniel Maclise added to a letter sent by Dickens on 12th March 1841.

This Grip died two years later in 1845, and was buried in Dickens’s garden, under a tree.  Once again the great man was moved, and he wrote that

it may have been that he [i.e. the raven] was too bright a genius to live long, or it may have been that he took some pernicious substance into his bill, and thence into his maw … but after some three years he too was taken ill, and died before the kitchen fire.  He kept his eye to the last upon the meat as it roasted, and suddenly turned over on his back with a sepulchral cry of “Cuckoo!”.

UP FOR SALE
The first Grip had come back from the bird stuffer perched atop a log in a fine glass case with a rustic frame, and remained with Dickens until the day he died, in the summer of 1870.  It was auctioned at Christie’s along with assorted art works and trinkets in front of a motley assembly of collectors and speculators, Dickens enthusiasts, and the few “fashionables” who had managed to tear themselves away from the Eton and Harrow match at Lord’s Cricket Ground.  With the enthusiasm of the crowd steadily mounting, the stuffed raven was brought in to cries of “I’m a devil, I’m a devil” and other quotations from Barnaby Rudge.  The hammer was just about to fall at 62 guineas when a cry of “never say die”—another quotation—went up.  The price immediately doubled to 120 guineas, and Grip was sold to a George Swan Nottage.

Nottage was a remarkable man.  The son of a Cripplegate butcher, he would one day rise to be Lord Mayor.  In 1854 he had founded the renowned London Stereoscopic Company, and one must assume that his purpose in buying Grip at the 1870 sale was to manufacture stereoscopic photographs of the celebrated bird.  Sadly, none have come to light.  After his death in 1885 Nottage’s widow assumed responsibility for Grip.  When she too died, Grip was the star turn at the sale of her possessions, and the raven’s appearance was solemnly recorded by The Times, along with its price-tag of 78 guineas.  Admittedly this was not front-page news, and the announcement only got as far as page 3.  In any case the year was 1916, and the sale of a literary raven could not compete with the sad tributes to the courage of men fighting for King and Country. 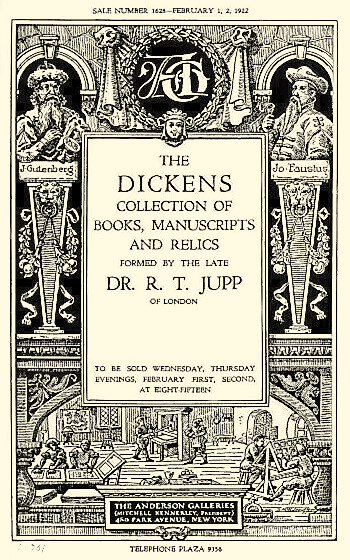 Catalogue of the sale of the Jupp Dickens Collection at the Anderson Galleries, New York, on 1st and 2nd of February 1922.

CRISS-CROSSING THE BIG POND
Grip’s new owner was Walter Thomas Spencer, a dealer in secondhand books with a particular interest in all matters Dickensian.  He had a shop at 27 New Oxford Street, which the writer Thomas Moult loved for its “dusty, cosy quietude”.  There the raven resided half-hidden in the “tarnished shadows of a London winter”—Thomas Moult again—until another acquaintance took it off Spencer’s hands.  He was Ralph Tennyson Jupp, a wealthy collector who had served in the Boer War as a doctor before doing pioneering work in the film industry.  Jupp’s dream was to establish a Dickens museum in London, but life and ambition were cruelly cut short in 1921 when he was kicked, fatally, by a horse in France.  His splendid collection of Dickensiana was sold in 1922 at the Anderson Galleries in New York.  The irrepressible Grip was there, along with the eyeglasses, the lockets, the penknives and other assorted clutter of the great man’s life.  Described by the catalogue as “probably the most famous bird in the world”, the stuffed raven was sold for $310. 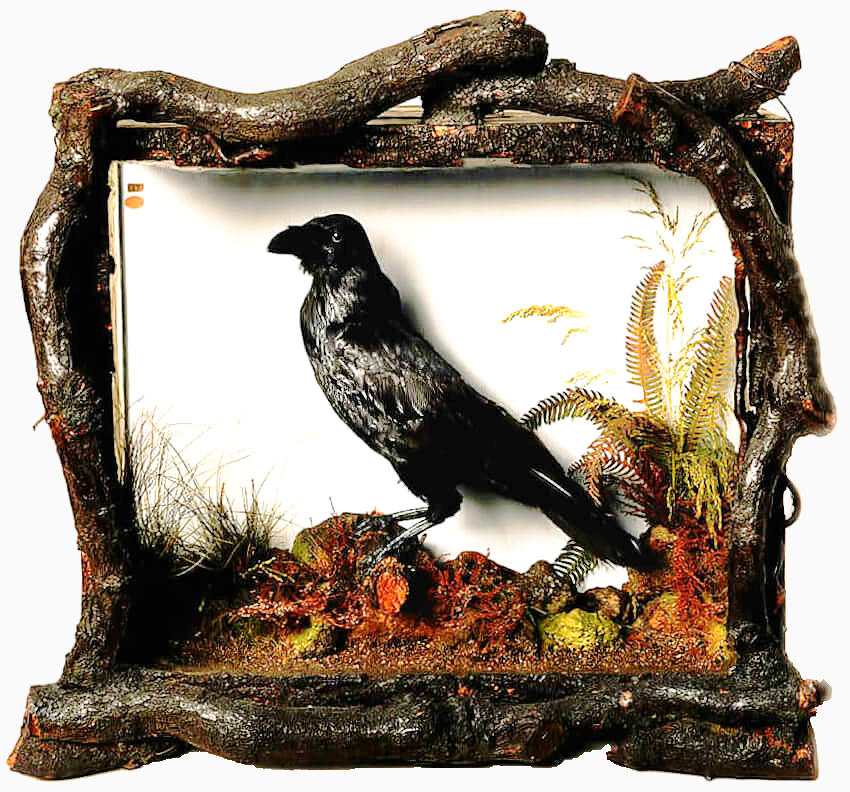 Regrettably, London Overlooked has not been able to identify who made the successful bid.  But later the same year the raven was back in London, where it sat in the window of Charles James Sawyer’s secondhand bookshop, also in New Oxford Street, until it changed hands once again, and crossed the Atlantic one last time, to Charles Sessler’s bookshop in Walnut Street in Philadelphia, and from Walnut Street into the collection of Colonel Richard Gimbel, a veteran of two World Wars and a distinguished collector of rare books and manuscripts.

And there in Philadelphia the raven’s restless wanderings finally ended.  Gimbel’s particular passion was the works of Edgar Allan Poe, and, as Poe’s Raven may well have been inspired by the bird in Barnaby Rudge, his attachment to the much-travelled Grip was obviously very great.  When he bequeathed his Poe collection to the Free Library of Philadelphia, Grip went too, still perched on its log, still safe behind its protective glass.  “Never say die”, said Barnaby Rudge’s companion, and in a sense the real Grip never has died.