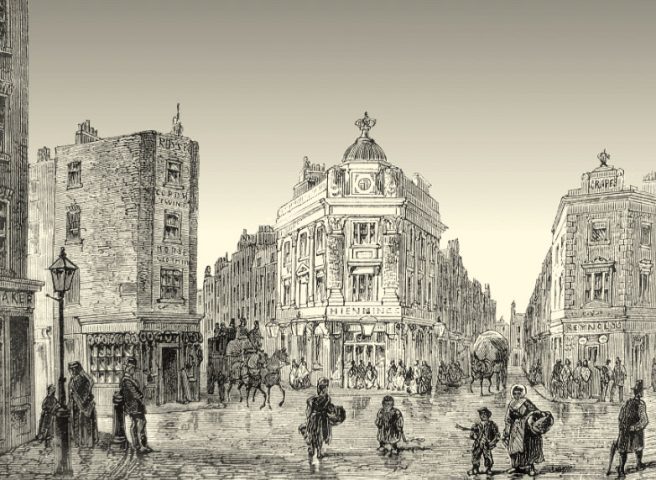 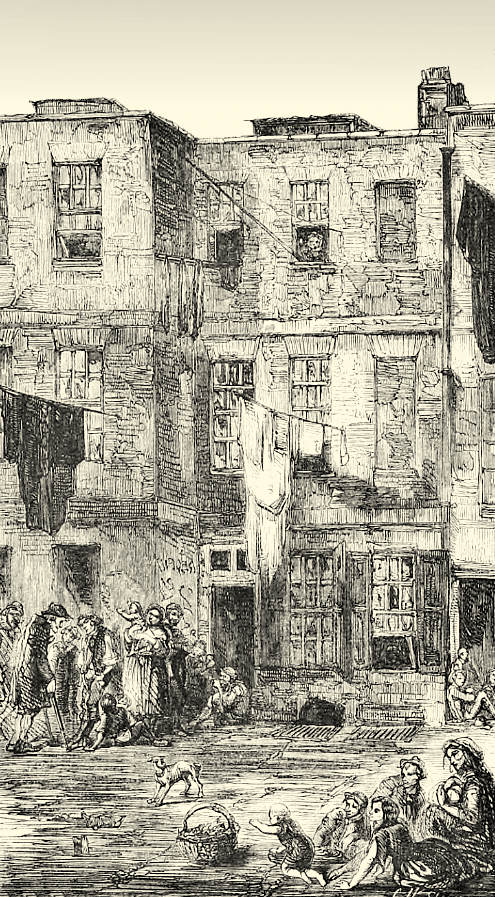 Poor dwellings in the Great Wild Street district of St Giles.  Image in The Builder 18 November 1854.

On the 27th of September 1872, which was a Friday, a woman by the name of Charlotte Cook decided that enough was enough.  Her son had absented himself from school, and she had made up her mind to punish him.  She had a stick—a cane of sorts—which she used for beatings.  But she remembered that another of her children, who was very little, had dropped the stick through the area railings while playing with it outside the house.  The stick had fallen down into the basement, where there was a kitchen.  “Go down to the kitchen to find the cane,” she said to a third child, whose name was Anne.

Anne, who was eleven years old, obeyed her mother.  Although it was only about half-past eleven in the morning, she carried a candle down to the basement.  The kitchen, which her mother never used, was dark.  But with help of the candle she managed to peer into the shadows.  She found the stick.  Then, as she was about to go back out into the area, something under the stairs caught her eye.  She held the candle up to have a closer look.  And there she saw what looked to her like a leg.

The little girl, shocked and frightened, told her mother what she had seen.  Together they went back down to the basement and into the kitchen, where in the flickering candlelight they found a woman who appeared to be asleep under the stairs.  She was all but naked.  She was also motionless, and it soon became obvious to Charlotte that she was not asleep but dead. 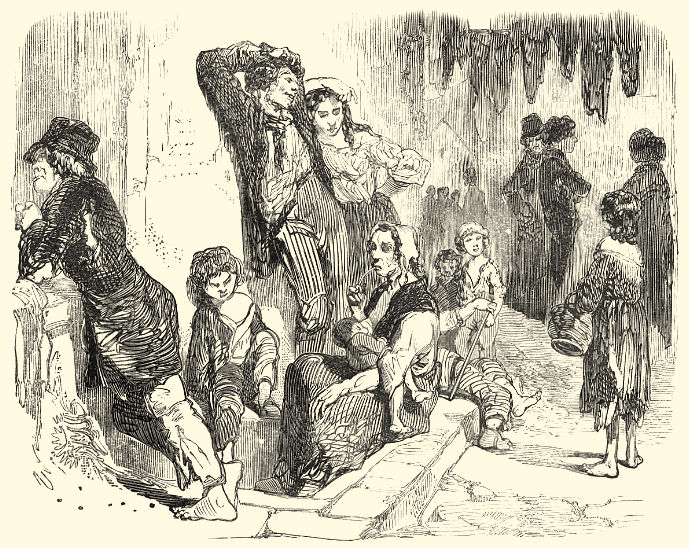 A scene in the St Giles rookery.  Image in Thomas Beames The Rookeries of London (1852) between pages 22 and 23.

A MOST WRETCHED DESCRIPTION
Charlotte Cook and her children lived at 24 Dudley Street in the Seven Dials district of St Giles.  In his Sketches by Boz Charles Dickens penned a vivid description of Seven Dials, its streets lined with squalid houses and shops, and half-naked children wallowing in the dark corners of the courts.  Dickens was writing in the 1830s, but little had changed when in 1850 Thomas Beames published a book on the notorious slum areas, or rookeries, of London.  Beames was a clergyman who for over a decade had ministered to the needs of the metropolitan poor.  Taking the reader on guided tour of the sad streets of St Giles he wrote of

women without shoes or stockings—a babe perhaps at the breast, with a single garment, confined to the waist by a bit of string; wolfish looking dogs; decayed vegetables strewing the pavement; low public houses; linen hanging across the street to dry; the population stagnant in the midst of activity; lounging about in remnants of shooting jackets, leaning on the window frames, blocking up the courts and alleys; with young boys gathered round them, looking exhausted as though they had not been to bed. 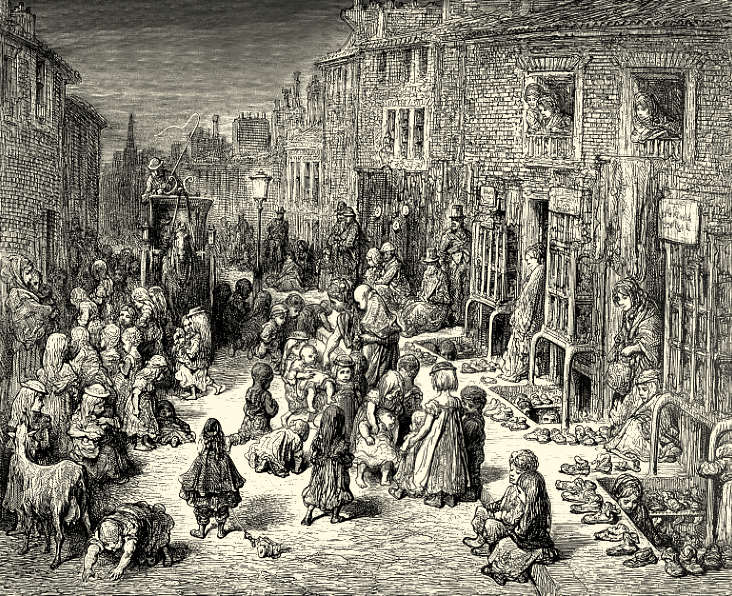 View of Dudley Street in Seven Dials.  Image by Gustave Doré in Blanchard Jerrold London: A Pilgrimage (1872) between pages 158 and 159.

Dudley Street itself is not hard to visualise, for it was drawn by Gustave Doré at about the time of the incident we are interested in.  In fact the book Doré was illustrating—Blanchard Jerrold’s London: A Pilgrimage—was published in the very same year.  He came under fire in certain quarters for giving such graphic exposure to the blight of urban poverty, with the Art Journal complaining that that his vision owed not everything to reality and at least something to imagination.  But there can be no doubt that London was conceived and undertaken with integrity.  Certainly there can be no images of the Victorian capital that are more powerful—more nightmarish even—than those created by Doré.

Doré has imagined Dudley Street, curving round as it recedes, as a Dantesque circle of hell, in which the meagre light of the streetlamp struggles against the gathering shadows.  The scene is at one and the same time a defeat and a triumph of the human spirit, for within the crowd of seemingly lost souls there are loving mothers cradling infants and children playing and mingling companionably, oblivious to their mean surroundings.  A dozen times we think we have spotted Anne Cook in the street.  And Charlotte Cook could be any of the women in the doorways, or at the windows, watching the goings-on.  The three shops at the right of the picture have areas below the level of the pavement, and we can easily imagine no.24—a place, according to the Morning Post, “of a most wretched description”—looking not unlike these decrepit dwellings. 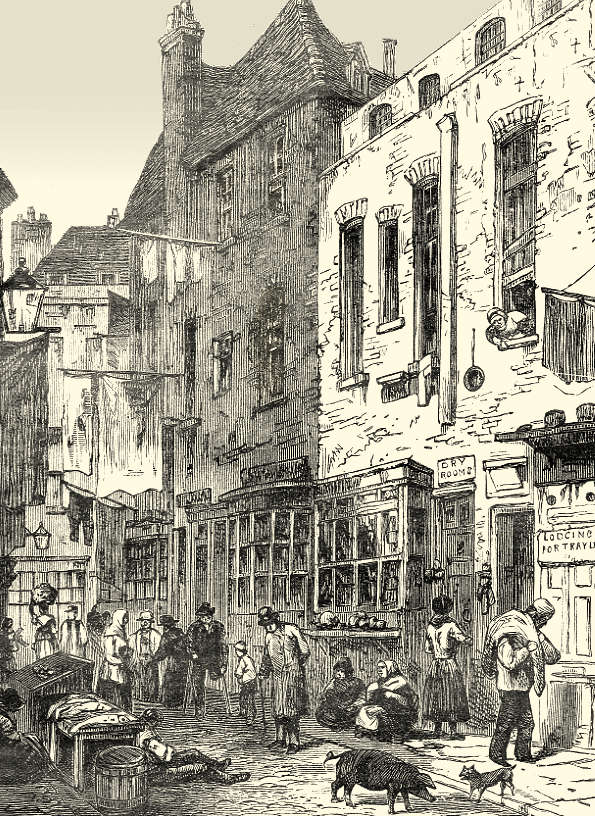 MURDER WE SUPPOSE
When Detective Sergeant Porter of the Holborn Division answered Charlotte’s urgent summons—she had sent a neighbour for help—he found a distressing scene.  The dead woman under the stairs was lying stretched out on her face with her feet pointing towards the wall of the kitchen.  She had her shoulders and head covered by a garment, which at first was thought to be a small cloak.  On one foot she had a stocking and a worn out boot.  Although the newspapers gave varying accounts of the precise details—some claimed that the woman had a cord tied round her waist, with a tattered old dress, and that the cloak was a handkerchief and the single boot a pair—the general impression of desperation was undisputed.  To the horror of the woman’s total abandonment was added the degradation of her near nakedness.

Scraps of evidence that might have had a bearing on the manner of the woman’s death were recorded.  What had initially been taken to be a cloak or a handkerchief turned out to be a man’s jacket.  This might have been enough on its own to encourage speculation as to the company she had been keeping.  But an even more curious, and worrying, discovery was a button on the ground beside the body, evidently torn from the jacket.  Furthermore, it was noted that blood was issuing from the dead woman’s nostrils. 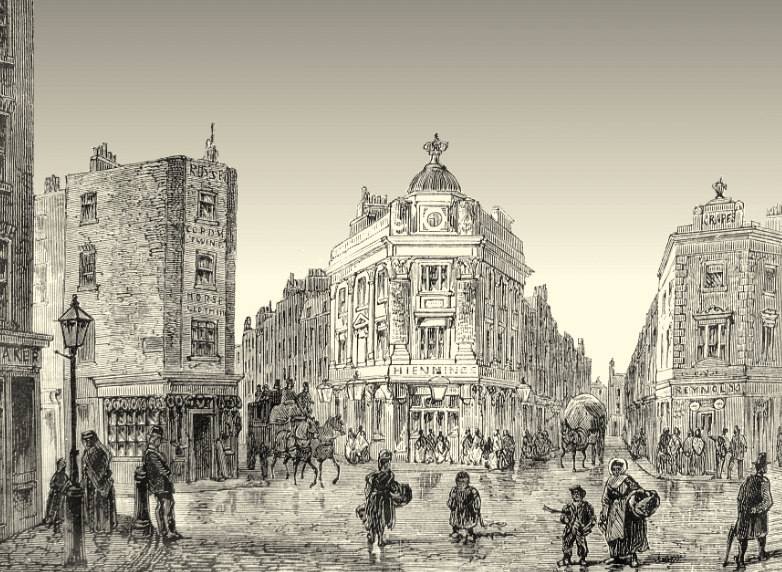 As one can easily appreciate, there was more than a suspicion of foul play.  The suggestion of physical violence, together with the desolate setting, made it an almost inevitable conclusion that the wretched woman, who as of yet had not been identified, was the victim of a homicidal attack.  The newspapers opted for sensational headlines, ranging from the confident “Supposed Murder in Seven Dials” of Friday’s Morning Post to the rather more circumspect “The Mysterious Affair in St Giles’s” of Monday’s Morning Advertiser.  But nothing was made of the fact—duly reported—that an old Roman Catholic prayer book had been lying near the body.  One suspects that this detail simply added its own extra force to the presumption that the unfortunate woman, who was clearly destitute, and had been found in a notorious slum, was a member of the capital’s large community of poor Irish immigrants.

I HEAR THEM AT NIGHT!
Bit by bit a picture emerged of the circumstances surrounding the woman’s death.  No.24 Dudley Street was run as a lodging house by an Elizabeth Sarty, who lived with her husband, a clothier, a few doors up at no.14.  Charlotte Cook was one of several lodgers, and, although she rented the kitchen in the basement, she did not use it.  In principle it was unoccupied, but it had become a refuge for any number of uninvited visitors, one of whom, for reasons yet to be determined, lay down beneath the stairs to die. 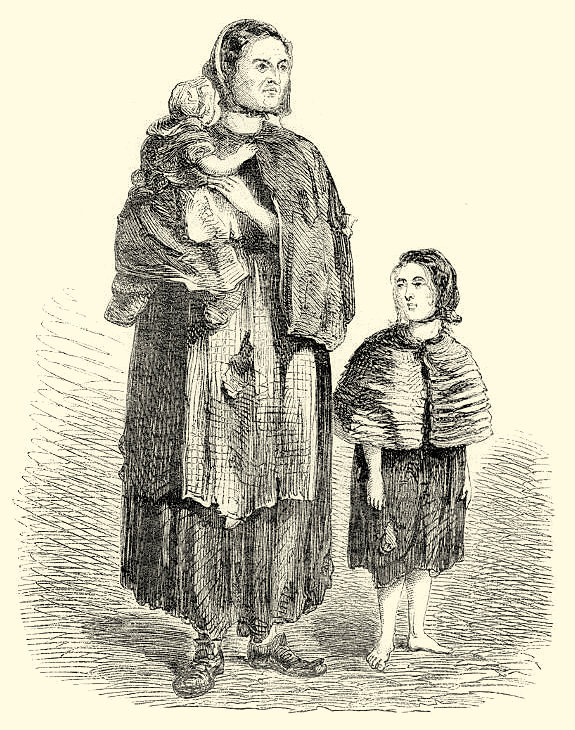 A vagrant mother with her two children in the casual ward of a workhouse.  Image in Henry Mayhew London Labour and the London Poor volume 3 (1861) between pages 402 and 403.

The kitchen must have been a source of constant anxiety for Mrs Cook.  Apparently the door was left unlocked: all the world had unrestricted access.  Often at night she heard people moving around.  She would go down with a candle and stumble across vagrants in a state of undress.  She was obliged to wait while they dressed before sending them on their way.  Only a fortnight ago she had come across two elderly women in the kitchen, and more recently, on the night of the 24th, she had wondered if someone was creeping through the passage.  But it had been raining—raining very hard—and she could not be sure.

The body of the dead woman was still being guarded by Sergeant Porter when a senior Holborn officer, Inspector Usher, arrived at no.24.  He noticed that the deceased was wearing a wedding-ring and keeper, which he removed.  Later he spoke with the sanitary inspector for St Giles, a man by the name of Dickson, who had also come to the house.  Dickson recognised that a corpse in a crowded slum dwelling posed a serious health risk.  Accordingly he advised that the body be removed immediately and taken to the mortuary of the St Giles workhouse, which stood nearby at the top end of Endell Street.  And there the full horror of the death in Dudley Street would be revealed … TO BE CONTINUED.

The Cradle and the Coffin, or, The Sadness of Elizabeth Brewer