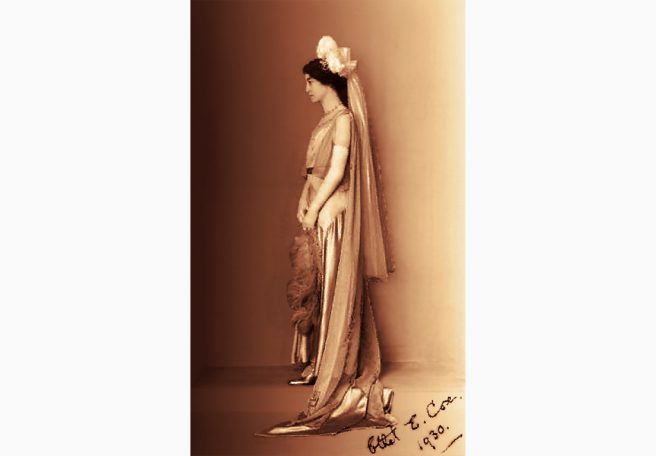 My aim in this piece is to recognise the life and achievements of the not-so-famous Ethel Cox—rather than her namesake, the suffragette Ethel Cox.

What the lesser known Ethel thought about female suffrage I do not know, but, as she spent her working life improving the education of thousands of largely working-class girls, I can only imagine she was in favour of it. 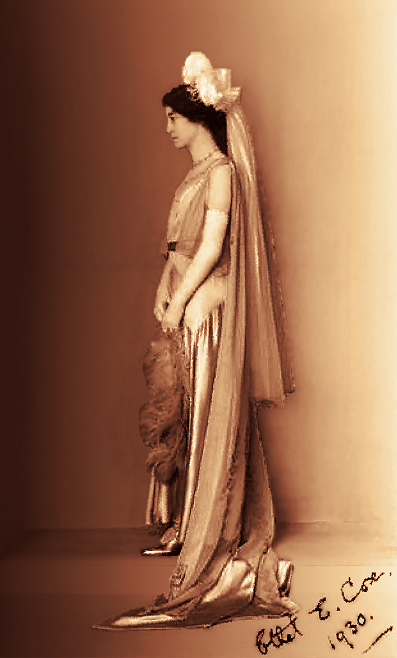 Photograph of Ethel Cox.  © London College of Fashion, University of the Arts London

Miss Cox was the headmistress of the Barrett Street Trade School, one of the London County Council needle-trade schools which prepared girls for work in the fashion and clothing industries.  In time the Barrett Street Trade School became what is today the London College of Fashion, part of the University of the Arts London.  For thirty-five years, from May 1915 until her retirement in December 1950, Ethel Cox led the school through times that saw significant changes to women’s lives and education.

She had both craft and education in her blood.  Her mother, Emily Catherwood, was the daughter of a fancy cabinet-maker and a dressmaker.  Her father, Thomas John Cox, was the son of a watchmaker.  Thomas was born in Great Suffolk Street in Clerkenwell, which was then the centre of the watchmaking trade and not far from London College of Fashion’s Golden Lane site.  But rather than follow his father into the horological trade, Thomas trained as a teacher at the St John’s Training College in Battersea.

Ethel Emily was born in November 1885 and baptised at St Ann’s, Finsbury Park.  She was followed two years later by a sister, Edith Beatrice.  In 1901 the family were living at 63 Digby Road, South Hornsey: Thomas was a schoolmaster, and either Emily did not work outside of the home, like many middle-class women of this era, or if she did it was thought more genteel not to record the fact.   The Cox girls had more educational opportunities than their parents, and Ethel graduated in 1907 with a BA from University College London’s Faculty of Arts.  It is appropriate that almost thirty years before, in about 1880, UCL had become the first academic body in the UK to award degrees to women.

Ethel then went on to complete a University of London Diploma in Pedagogy:

The University established a special examination in the art, theory and history of teaching, with a view to encouraging persons who intended to adopt the teaching profession to acquire special training for their work.  No candidate was eligible for the diploma who was not already a graduate.  To the theoretical part of the examination a practical exercise in the teaching a class in the presence of the examiner was always added.  (University of London The Historical Record 1836-1912 1912)

By 1911 the family had moved south of the river, nearer to Thomas’s work as headmaster of the Cavendish Road Elementary School.  Their new home at 96 Ritherdon Road near Tooting Bec Common had ten rooms and no doubt provided plenty of work for Matilda Holmes, their domestic servant.   Ethel and Edith were now both working, Ethel as an English teacher at the Shoreditch Technical Trade School (a needle-trade school) and Edith in an elementary school. 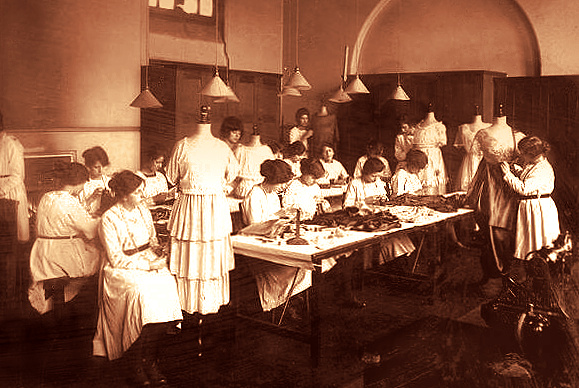 Needle-trade schools arose out of the needs of the clothing industry.  In London the high-end and couture trade centred around Mayfair and Knightsbridge, bespoke tailoring around Savile Row—as is the case now—and much of the ready-to-wear industry in the East End:

Before the introduction of the needle-trade schools, girls were recruited from elementary schools to work as ‘learners’ in the exclusive court and society dressmakers’ houses and smart department stores.  Needlework was a compulsory part of the elementary school curriculum.  However, the level of skills required by the exclusive West End trade went far beyond the basic skills taught in schools.  (Helen Reynolds Couture of Trade: An Early Pictorial Record of the London College of Fashion 1997)

Working in the clothing industries was a major area of female employment, but workers often received little training, their pay was low, they worked in poor conditions, and they might find themselves out of work or on reduced hours outside the London Season.   The needle-trade schools were founded at the turn of the century to provide skilled labour for what was and remains a major industry.  The Trade Boards were very keen to develop educated home-grown talent to stop business going abroad, so as an experiment girls at Borough Polytechnic were taught how to make made-to-order waistcoats.  Once in employment these girls were able to command higher wages with their superior skills.

The Shoreditch Technical Trade School for Girls opened in Pitfield Street in 1906 with classes in dressmaking, embroidery and upholstery.  Girls attended for two years between the ages of twelve and fourteen after completing their elementary education.  As well as technical instruction they received general education—hence Ethel’s role as an English teacher.

Ethel was obviously doing well, and in May 1915, when aged only twenty-nine, she became the headmistress of the newly opened Barrett Street Trade School.  The forty girls who were enrolled studied either dressmaking, tailoring or hairdressing.  These early years must have been difficult: the horrors of the war, Zeppelin raids beginning, and for Ethel personally the death of her mother in 1916.  In February 1918 an Act of Parliament was passed giving the vote to all men, and to women who were over thirty and had five pounds worth property.  Although Ethel was over thirty, with a senior professional position as a resident in her father’s house, she would have to wait until 1928 to get the vote.

Ethel was an inspiring and innovative leader, and the School was going from strength to strength.  Numbers increased to over a thousand full and part-time students, and evening and day release classes were offered for those in work.  The life of the School was vibrant and varied: well-attended annual exhibitions of student work were organised attracting potential employers, fashion shows were staged, students took part in the School’s annual Shakespeare production—they also made all the costumes and wigs—and school visits were organised.  Miss Cox herself gained public recognition when in 1923 Pitman published Girl’s Work in Trade and Industry:

The extensive publicity the School received during the inter-war period was very much the result of efforts by its Principal, Ethel Cox, another pioneering woman in Fashion Education.  (Angela McRobbie British Fashion Design: Rag Trade or Image Industry 1998)

In the 1930s Thomas, Ethel and Edith moved to a substantial detached house called Redcroft at 3 West Drive, just south of Tooting Bec Common on the Streatham Park Estate.

Ethel led the Trade School through the Second World War.  Students were evacuated to Maidenhead, and in December 1944 Barrett Street was hit by a bomb.  Major changes took place with the passing of the 1944 Education Act: specialist training was only permitted after students had completed their secondary education at age fifteen, and Barrett Street closed the junior school, becoming a technical college.  There were changes in Ethel’s private life, too, when Thomas died just after the war leaving three thousand nine hundred and twenty pounds two shillings and sevenpence to his two daughters.

Ethel retired at sixty-five in December 1950 and lived until 1979.  Her albums of cuttings, prospectuses, publicity materials and photographs were donated to the London College of Fashion Archives. 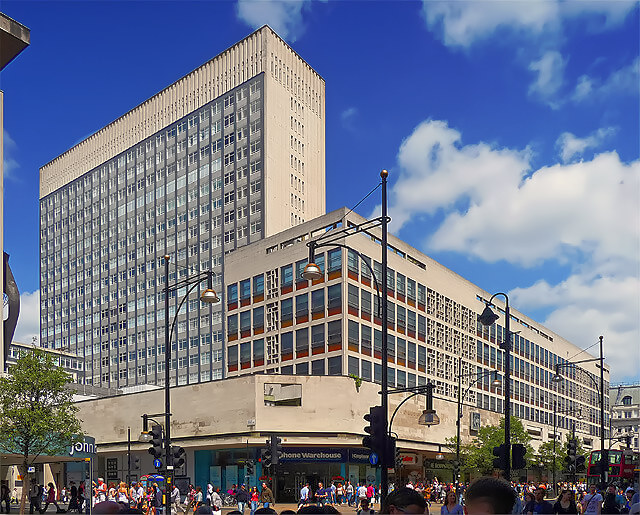 When the London College of Fashion moved into a new building, which overlooks Oxford Street, the main assembly hall was named the Ethel Cox Hall.  Although the hall has since been rechristened, Ethel is not forgotten.  A photograph of her can still be seen in the College.  Taken in 1929 it shows a whippet-thin, rather serious woman dressed for presentation at Court.  This was to mark the occasion when her widowed father become Lord Mayor of Wandsworth, and Ethel his Lady Mayoress.  What I like best about the picture is that her ankle-length satin-skirted dress, the elaborately embroidered train and the feathered headdress were all made by the students of the Barrett Street School.  Ethel certainly embodied the school motto Faber Quisque Fortunae meaning “Each man”—or woman in this case—”is the maker of his”—or her—”own fortune”.

SOURCES
Two sources which provide much more information on the history of the school and fashion education in general are Helen Reynolds Couture of Trade: An Early Pictorial Record of the London College of Fashion (1997) and Katherine Baird (edited Louise Clarke) London College of Fashion Archives and Special Collections in The Measure (1996).  Amongst other amazing collections photographs of the activities of the trade schools can be found via VADS: the online resource for visual arts.