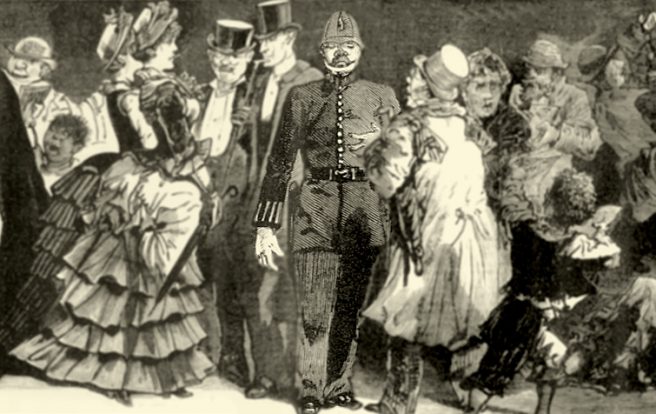 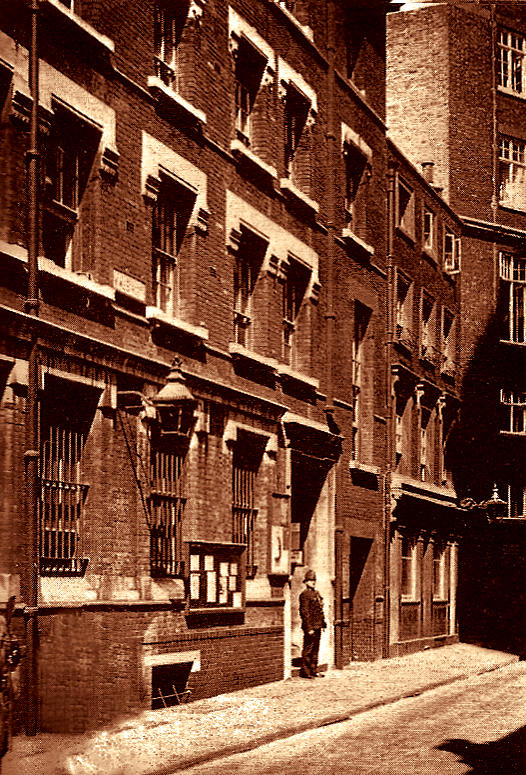 There is an amusing story about a young London policeman that was a given a short paragraph in a couple of newspapers in 1872.  His name was William Kitchen, and he was in his early twenties.  He was a constable in C Division, which was charged with keeping the Queen’s Peace in and around St James’s.

In fact to describe Kitchen as a London policeman is a bit misleading, as he hailed from Penzance in Cornwall.  But whatever brought him to the metropolis from the south west of the country, we find him in the 1871 census ensconced as a serving officer in the police station just off Piccadilly Circus in Lower Vine Street.  His fellow constables were recruited from a wide catchment area.  As one would expect, there were a number of local men.  But others came from just about anywhere outside London—Devon, Hampshire, Kent, Warwickshire—with a fair number born in Ireland.  One chap—he was called Johnny Williams—had come up to the capital from Liskeard in Kitchen’s native Cornwall.  Another—his name was Alfred Winkler—was a naturalised German.

One obvious reason why a young man might come up to London from Penzance was to escape rural poverty, and as a metropolitan police constable he would have been in some respects quite well off.  He would live in the police station, sleeping in an upstairs room, and eating with his mess of brother officers.  He would have access to a library of educational and amusing material—assuming he paid the one penny monthly fee—where he might browse the shelves for books on geography and history and other interesting subjects.  If his tastes were not this lofty, he might challenge a colleague to a game of billiards or dominoes, or to a friendly bout of boxing or single-sticks.  He would be paid twenty shillings a week, and this emolument might rise with the passage of time, and with a record of good conduct, to a handsome twenty-six.  His uniform—and no doubt his truncheon and rattle—came free of charge.

A stern guardian of the law walks doggedly through the hell that was the Strand at night.  Image at The Illustrated Police News 5 September 1885.

BY THE BOOK
But a constable’s work was not easy.  In the first place he was charged with what the instruction book issued to all men on enrolment defined as the “protection of life and property” all the time that he was on duty.  Then again his very manner of self-propulsion while on the beat was strictly prescribed, so much so that

he is to walk at a gentle pace, about 2½ miles an hour, keeping the outer or kerb side of the street by day, and walking close to the houses by night.

His hours of duty were constantly changing.  One day he would go out to his beat at six in the morning, finishing at six in the evening with a four-hour break between ten and two.  The next day would follow the same pattern but would run from ten in the morning to ten at night.  Then it would be back to six till six, and it would alternate in this way for a month, after which the unhappy copper was obliged to work two whole months of night duty, patrolling dark and menacing streets for eight hours without a break. 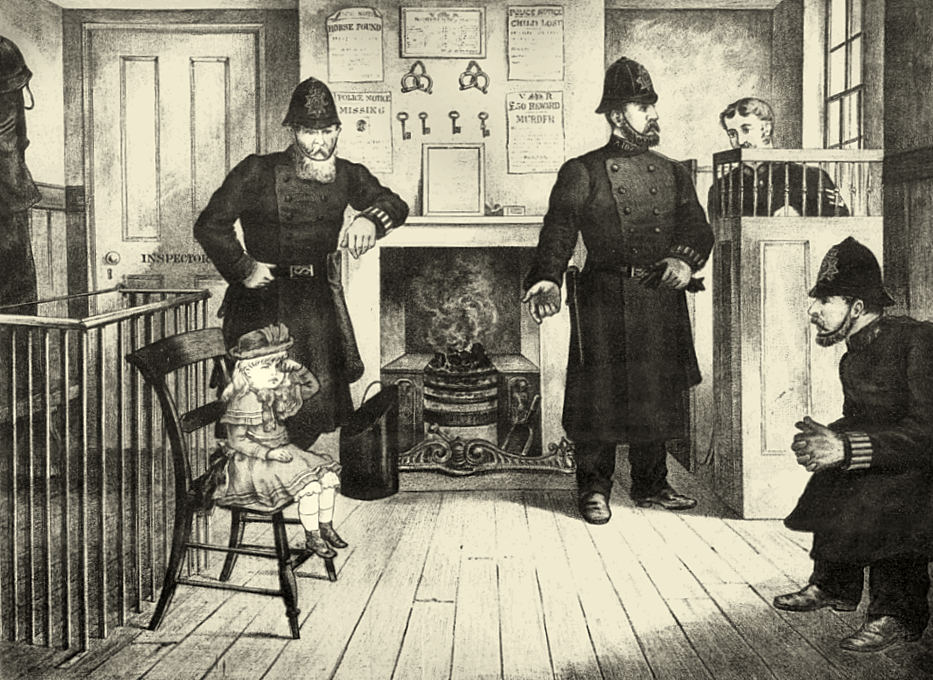 The other side of policing the metropolis.  Some kind-hearted coppers look after a little girl, who is lost and afraid.  Image in The Illustrated Police News 25 December 1886.

The instruction book was his master.  He must be civil and respectful to the public.  He must speak the truth at all times, and record important facts in his notebook.  He must keep his temper, and ignore provocation.  He must not resort to the truncheon until manual methods of arrest have been tried, and failed, and even then he must avoid the head and aim only at the arms and legs.  He must deal not only with felonies but with accidents and fires.  He must look after citizens who are “found insensible in the streets” and who appear to the casual observer to have drunk themselves into a stupor but who are in fact victims of apoplexy.

But a constable had another master, too, and that other master was his sergeant.  In fact his day—or his night—would begin with his sergeant.  After parading at the station, to be inspected and to receive his orders, he would be led out by the section sergeant together with the other constables.  The sergeant would tramp through the beats, one by one, walking in a direction opposite to that of the constables, keeping an experienced eye open for infringements of the regulations.  What infringements might a constable be tempted to commit?  Ducking into the shade on a hot day, for example, or walking at more than two-and-a-half miles an hour to keep himself warm on a cold day or night. 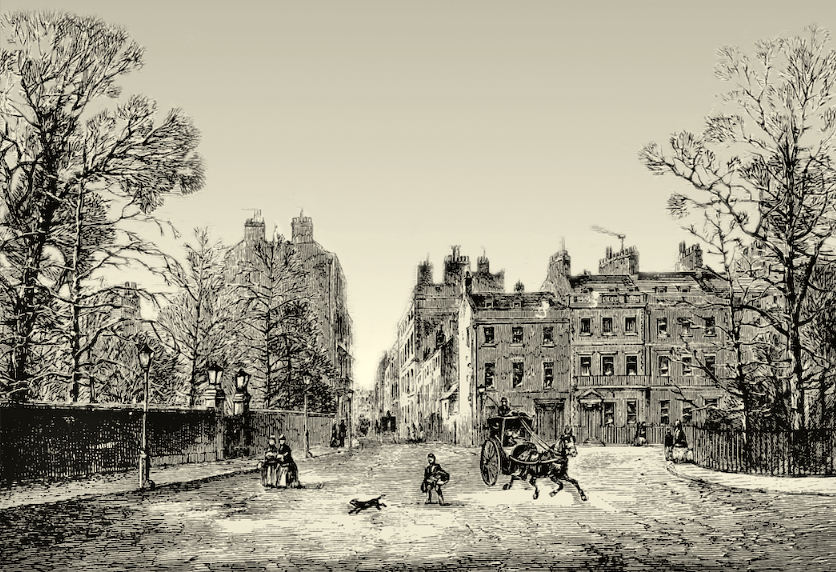 PROCEEDING ALONG HAYS HILL
Well, just as we all have our masters, real or abstract, so young Constable Kitchen had his, and his name was William Wells.  Sergeant Wells of C Division came from Frisby in Leicestershire, and was about the same age as the constable.  On the day in question—in fact it was the night, the night of the 28th of April—the two men were on duty around Berkeley Square, which lay and still lies north of Piccadilly and midway between Park Lane to the west and Regent Street to the east.

Now at about two-fifteen in the morning Wells was walking at a steady and proper two-and-a-half miles an hour along Hay Hill, which ran between Berkeley Street and Dover Street.  There is no record of the direction the sergeant was taking, but, whether he had started at the Berkeley Street end or at the Dover Street end, no doubt he expected to meet Kitchen somewhere along Hay Hill, walking, as per the instruction book, in the opposite direction.  In fact he did not so much meet Kitchen as see Kitchen, and he saw Kitchen just as Kitchen was darting north off Hay Hill along Bruton Mews, doing a sight more than two-and-a-half miles an hour.

Not only was Kitchen in flagrant breach of the regulations, given the speed he was going, but he was very obviously trying to avoid Wells.  The latter sprang into action and gave chase along the mews.  No sooner had he caught up with the constable than he understood what was going on, for the constable, who was breathing hard after his mad dash through the dark, had on his breath the unmistakable smell of alcohol.

In a word Kitchen was drunk.  And, as such, he was again in breach of regulations, for it was stated in the instruction book, quite unambiguously, that a constable was not on any account to drink on duty.  He must not receive a drink from anyone.  He must not not even look as if he might accept a drink by loitering or standing “in an idle and listless manner” or gossiping.  If he needed refreshment he had to obtain the permission of his sergeant.

In accordance with the instruction book Wells took hold of Kitchen’s arm, at the same time feeling for his truncheon with his free hand, just to be on the safe side.  “You are drunk, Constable Kitchen,” he said.  “I order you to the station.”  “I refuse,” Kitchen replied.  Met with this defiance Wells rattled his rattle.  In an instant other constables on nearby beats came running up.  “Take him to the station!” Wells ordered.

As he was being led off in the direction of Lower Vine Street the wretched Kitchen struggled against his captors, managing to throw Wells to the ground.  Then, before the other constables could regain control, he landed Wells a terrific blow.  A second and a third terrific blow followed.  Finally the constables pulled Kitchen off the stricken sergeant, and dragged him off to the police station.  This they did only with the greatest difficulty, as the captive acted very violently all the way.

At the station the sorry party was met by the inspector.  His name was George Browning.  He hailed neither from Cornwall nor from Leicestershire but from Hampshire.  He was an older man who presumably knew the contents of the instruction book by heart.  Accordingly he expressed his grave displeasure at the conduct of Constable Kitchen, whereupon Constable Kitchen tried to land the fourth terrific blow of the night.  Somehow, though, he failed to follow through, and Inspector Browning, unmarked and unperturbed, had him bundled into a cell. 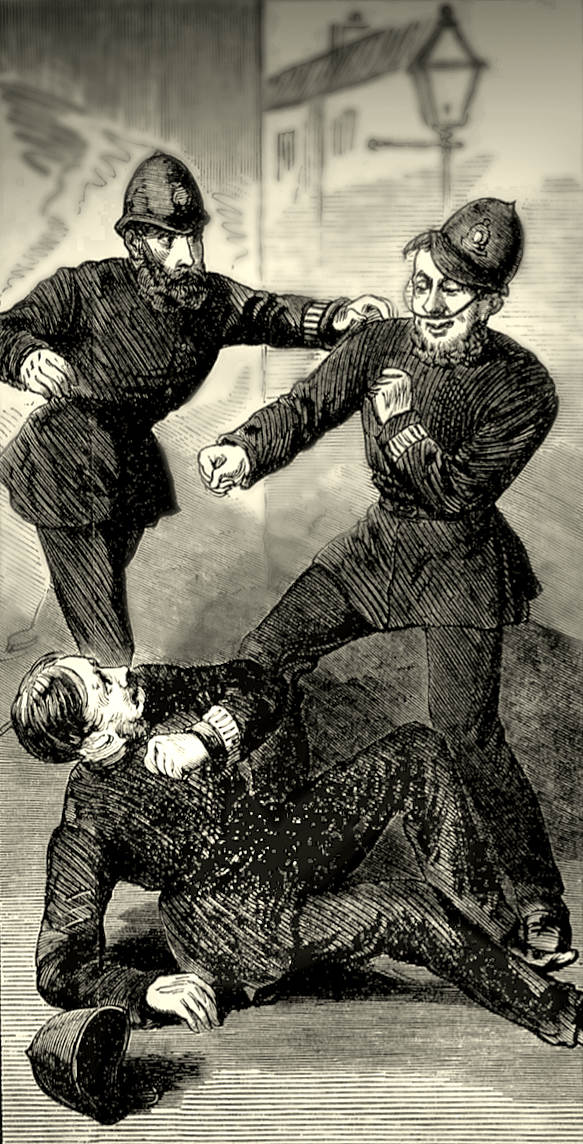 A SERIOUS CASE
In due course William Kitchen found himself in the magistrate’s court in Marlborough Street.  The session was presided over by Alexander Andrew Knox, who took a dim view of the young constable’s behaviour.  Knox called on the superintendent of C Division, a seasoned bobby and, finally, a Londoner by the name of Joseph Henry Dunlap, to comment on the prisoner’s character.  At this point the sources disagree, and, depending which newspaper you consult, Superintendent Dunlap spoke either favourably or unfavourably of Kitchen’s conduct prior to the fracas in Bruton Mews.

We may not know what was said about young Kitchen but we do know the outcome of the trial.  The magistrate, who considered the case serious, and was not inclined to be lenient, declared that a mere fine would not do.  A custodial sentence was called for, and the disgraced constable was sent down for a month with hard labour.

But why did Kitchen lay into Wells?  Our sources are silent again.  Possibly there was an element of mutual dislike in their professional relationship.  Possibly the young constable’s judgement was so clouded with drink that he decked his sergeant just for a lark.  Whatever his reason for his behaviour, it went against both the word and the spirit of the instruction book, which he was now obliged to surrender along with his rattle, and his truncheon, and his C Division badge.

Haunted by Sadness, or, Is 50 Berkeley Square London’s most Ghost-Ridden House?