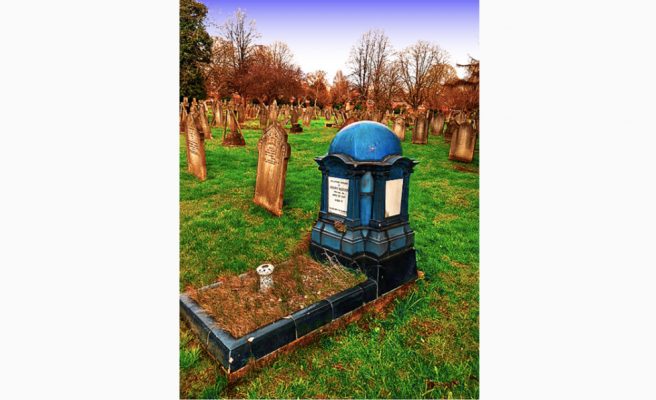 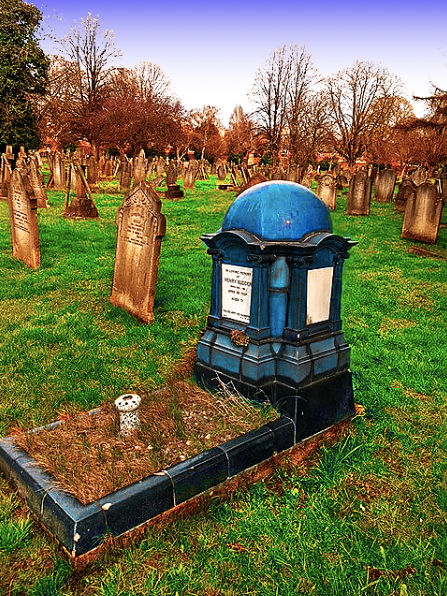 Opened in 1892, Streatham Cemetery in Tooting is a pleasant spot, in spite of being on a noisy and busy road leading to Wandsworth.  Scan the horizon and you will see that most of the older graves are of a uniform soft grey stone.  Then near the west chapel something incongruous meets the eye: a navy blue “something” that looks not unlike a chunky fire hydrant stands out like the proverbial sore thumb.

On closer inspection the fire hydrant appears to be a small domed-roofed temple made of dark blue glazed tiles.  The tiles at the base are much deeper in colour, which suggests that those on the superstructure, exposed to sunlight and weathering, have faded to blue from a more funereal black.  The grave bed is enclosed with edging tiles and filled with marble chippings, and is currently losing a battle against weeds and grass.  Four mini ionic columns hold up a rounded pediment, and the upper surfaces of the monument are faced with white glazed tiles.  On the front side is the following legend:

I wondered what made a family choose a grave so very different from its fellows.  Streatham Cemetery is not the sort of grand resting-place where you might expect to see a bit of middle-class one-upmanship.  So why a blue temple?  Was Henry, or whoever chose the memorial, an innovator, or a student of architecture, or even a bit of an exhibitionist?

A LAMBETH FAMILY
Henry Budden does not exactly sound like any of the above.  Born in Chichester in 1837 he was one of eight children of Charlotte and James Budden, a “whitesmith” who either fabricated or finished items made of metal, the metal as a rule being tin.  When James died in 1852 his sons all gradually moved to London.  Henry was in the capital by 1861, and on Christmas Day of that year he married a Lambeth girl called Ann Law, who lived next door to his sister Emma and her family.  Incidentally, Ann’s father, Gilbert, was also a whitesmith. 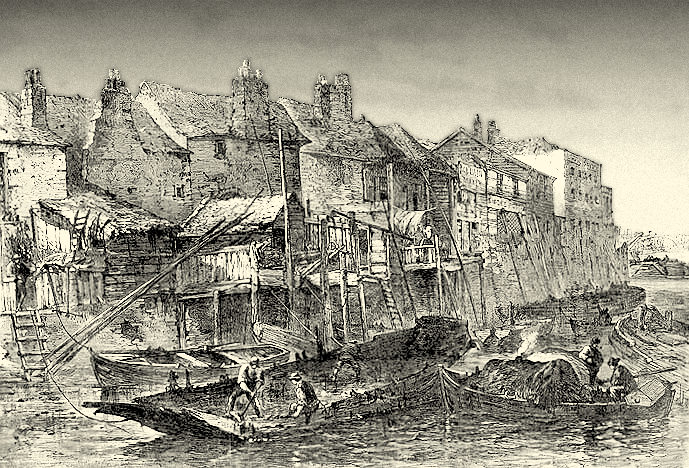 Ann and Henry lived around the South Lambeth or Vauxhall area for at least forty years, first in Warwick Street, then in Tyre Street, and finally, and further to the south, in Guildford Street on the border with Stockwell.  South Lambeth was a hive of industrialisation, as can be seen from the 1864 Stamford map.  Along the river from the south side of Lambeth Bridge to Vauxhall Bridge were soap works, the Lambeth Pottery (Doulton’s), the London Gas Works and the Vauxhall Distillery.  During this time Henry worked as an engineer, or an engine fitter, making and maintaining steam engines.  Although with this job description he could have been employed on the railways, there is no evidence that he was: I have not been able to identify him in railway records.  And so I suspect that the “engines” he looked after were the machines in one of Lambeth’s many industries.  Interestingly, his brothers are listed in census returns as engineers, engine fitters and engine turners.  One of his nephews is a machine fitter in a factory.

A possible clue to the choice of the mysterious blue grave can be found in the 1881 census.  Henry is living with his family at 22 Warwick Road.  He is a machine fitter.  His oldest son, also a Henry, is a clerk.  His two younger sons are at school, and his eighteen-year old daughter Alice is a designer for art pottery.  Given that the most famous art pottery was that produced by the Doulton Pottery, and that Henry’s grave was made of some kind of glazed ceramic, could this be the connection? 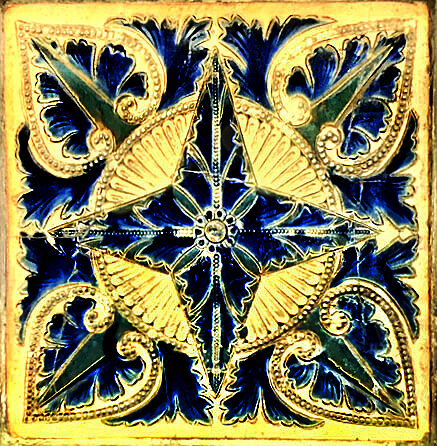 THE DOULTON POTTERY
From small beginnings the Doulton Pottery produced amongst other things stoneware bottles, water filters, beetle traps, chimney pots, equipment for the chemical industry, electrical insulators, sewer and drain pipes, and jars, including those used for Warren’s Blacking.  The pottery had been founded by John Doulton (1793-1873), but his son, the energetic Henry (1820-1897), was the true innovator.  Henry grew the company, bought out competitors, and introduced steam technology into the business.  Henry received a knighthood in recognition of his efforts, and Doulton’s was awarded a Royal Warrant.  But Doulton’s is perhaps most famous for its artware pottery and its connection with the Lambeth School of Art.

In 1854 the Reverend Robert Gregory, Vicar of St Mary The Less, started the Lambeth School of Art as evening classes to provide educational opportunities for his parishioners.  Two years later John Sparkes became the Head of the School, but it took several years of nagging by Gregory and Sparkes to persuade Henry Doulton to employ one of the Lambeth School of Art students—the very talented George Tinworth—in his factory.  After the success of the Doulton artware pottery at the 1867 Paris Exhibition, Henry Doulton, ever the shrewd businessman, expanded his factory art department, taking on more of the School’s alumni. 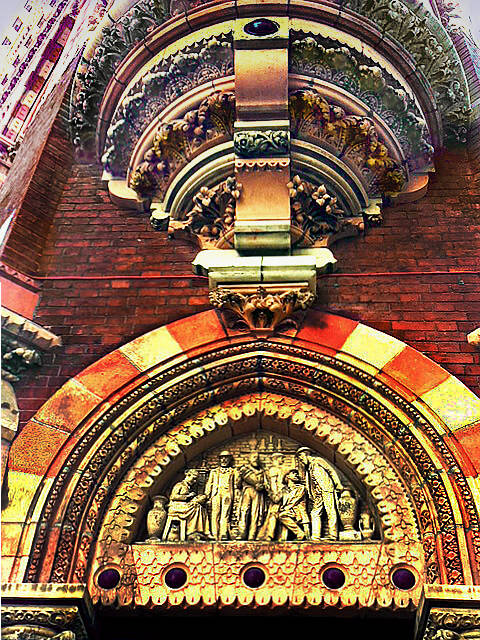 I do not think it is too far-fetched to suppose that this is how Alice Budden came to be employed by Doulton’s in 1877.  She was thirteen years of age, and she had been a pupil at St Mary the Less School in Miller’s Place, where the art school was based.  By the time she was eighteen she was a senior assistant, decorating the borders of stoneware vases and pots created by Doulton stars such as Hannah and Florence “Birdie” Barlow, and by 1884 she was a fully-fledged designer.  Along with her art department colleagues, the majority of whom were women, Alice would round off her day by attending art classes in the Lambeth School, where she would have access to the library and museum set up by Henry Doulton.  She does not appear to be one of Doulton’s leading designers—I have only managed to track down a handful of items bearing her mark—so perhaps it was no great sacrifice to leave the factory in 1891 to marry William Paterson, a provision merchant, and to move to Cambridge Road—now Cambridge Heath Road—in Bethnal Green.

But Alice was not the only member of the family who worked in the pottery industry.  Her younger brother Gilbert was a stoneware merchant’s clerk, and their cousin, Mary Budden, also worked for Doulton’s.  Another brother, Henry Budden—hereafter Henry Budden jnr—was employed by Doulton’s as a clerk.  He was obviously a bright young man, and he came to the notice of Henry Doulton when barely twenty.  By the age of twenty-five he was one of the factory managers.  Alice certainly and Henry possibly worked in the only part of the factory that still exists, on the corner of Lambeth High Street and Black Prince Road.  Built between 1876 and 1878 it is exuberantly decorated with Doulton products, as one would expect.  On it we find multi-coloured tiles, coloured terracotta ornaments, gargoyles, and a remarkable terracotta tympanum made by George Tinworth.  The last of these depicts amongst others Henry Doulton, Hannah Barlow, Hannah’s cat and Tinworth himself.

MANAGING THE FACTORY
Henry Budden pops up several times in Doulton’s history.  In December 1888 he is interviewed by the newspapers when the factory suffers a catastrophic fire, which caused thirteen thousand pounds of damage.  Henry Doulton worked with his manager to ensure no men were laid off after the fire.  However, relationships with the workers were soured by strikes in 1891.  In the wake of these Sir Henry decided set up a Social Institute for his employers, and, as Henry Budden became the President, it is possible that he worked alongside him as joint architect of the project.  A building was bought in Lambeth High Street to house the club.  Lectures and concerts were laid on, and the employees started an athletics club.  Rather jolly annual suppers were held, several presided over by Henry Budden.

Grave of James and Annie Carr in Wandsworth Cemetery in Earlsfield, with detail of inscription.  © Karen Ellis-Rees 2018

When in 1897 Sir Henry Doulton died, and was buried in an extravagant mausoleum in Norwood Cemetery, Henry Budden jnr surely must have been amongst the one thousand five hundred employees who attended the funeral service in St Luke’s Church.  At any rate, he continued to prosper at Doulton’s.  In 1904 he moved to a newly built ten-room house called Burleigh Lodge in Rodenhurst Road in Clapham Park, and in the same year, at the age of thirty-eight, he married a young woman called Gertrude Cutter.  In later years he describes himself as a ceramic engineer, and the family do well enough to have a servant.

In 1907 his father Henry died, and was buried in Streatham Cemetery in the blue temple.  The younger Henry may have seen the memorial as a fitting choice for a family with Doulton connections.  Perhaps—if it is not a tasteless suggestion—he had decided to combine housing his father’s remains with a little advertising for the firm.

These temple-style tombs do not seem to have caught on very widely.  There is one in Wandsworth Cemetery—the occupants are a man called James Miller Carr and his wife Annie.  Annie died in 1910 and James in 1911.  Interestingly, James worked for Doulton as Head of the Terracotta Department.  I have reason to believe that there are some other “temple tombs” in Highgate and Hampstead Cemeteries.  I would be interested to find out who they belonged to, and to see if there are more Doulton connections.