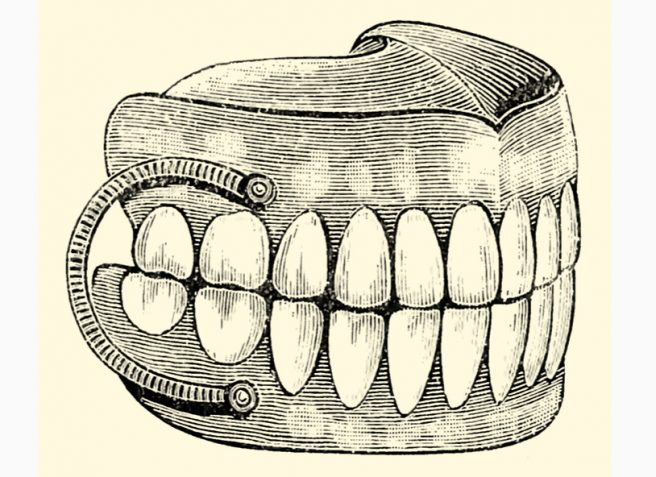 A funeral procession.  Image in George Somes Layard The Life and Letters of Charles Samuel Keene (1892) between pages 142 and 143.

If you read last week’s article, which can be accessed by following this link, you will recall that a certain Margaret Louise Bryden came down to London from her native Edinburgh in the 1880s, and lived, and indeed died, at 31 Linden Gardens in Chiswick.  She had been legally separated from her husband, Frank Bryden, and her only companion in her house in Chiswick was her Scottish maid, Margaret Bowyer Flemming.

You will also recall that on New Year’s Day in 1890 Flemming made a grisly discovery.  She had returned to Linden Gardens after a short absence, and when she entered the house she found her mistress in a bedroom, stone-cold dead.  The police doctor who examined Margaret Bryden’s body, Edward Osborne Fountain, realised that something had been stuffed into her mouth.  It turned out to be a linen nightdress case.  But that, as you are about to learn, was not all.

THE INQUEST
A post mortem examination was performed by Frederick Charles Dodsworth, a police surgeon and partner of Dr Fountain, who had been taken ill.  At the inquest at the George IV, a public house in Chiswick High Road, Dodsworth reported that he had found no marks of violence on the body, but he noted that Margaret Bryden’s heart, liver and kidneys were not in the best condition.  More curiously, though, he discovered that her denture plate was stuck in her throat. 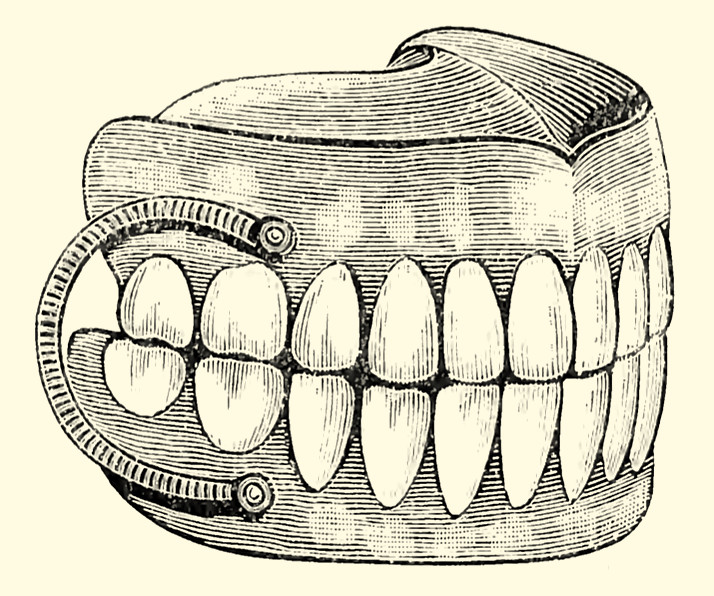 At first it was suggested that Margaret had accidentally swallowed and then choked on her own false teeth, and that in desperation she had used the nightdress case to try and get a grip on them, or to make herself sick.  There was some confusion arising from the fact that the first doctor at the scene had made no report of the dentures being in her throat.  This, of course, could be explained as an oversight, and the police very quickly seemed to adopt the theory that Margaret’s death had been an unfortunate misadventure.  However, Dodsworth put paid to the accidental death claim by stating not only that Margaret’s dentures were in her throat, but also that the denture plate was too large to go down on its own.  So, if her death was not an accident, the question that needed answering was who might have wanted her dead.

SUSPECT ONE: THE HUSBAND
Frank—the nearest and not so dearest—was among the initial suspects.  The reason he might want to dispose of Margaret was both obvious and as old as the hills.  His marriage had broken down, he had to continue to support Margaret, and he was saddled with an intemperate wife several years older than himself.  Since he had no grounds for divorce, he had no chance of marrying again and having children to continue the family firm.

Another reason why Frank might want to dispose of Margaret was in order to get his hands on her money.  Shortly before their marriage she had gained an inheritance from her father, Alexander Aitken, and shortly after the separation she inherited more from her mother, Christian Aitken.  At the time of her death Margaret was worth almost three thousand pounds, a not inconsiderable sum that would have the purchasing power of about two hundred and fifty thousand pounds today. 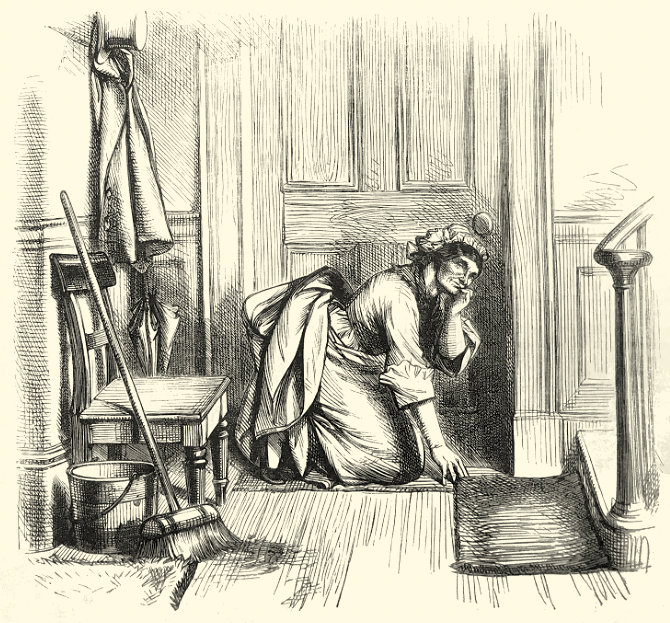 A charwoman listening at a keyhole.  Image in The Leisure Hour 7 September 1872.

One action of Frank’s does seem slightly curious.  On the 2nd of January he sent a charwoman, who worked for him in Marylebone, down to Linden Gardens to clean the house, along with the maid Flemming.  However, given that he had no further use for the house, one might have thought that he would want to be shot of it as soon as possible.

Frank was aware that even suspicion of his involvement could damage his reputation and his business.  He lost no time in employing a barrister to watch the inquest, and to represent him on the third and final days.  In the event he was never charged.  He may have been totally innocent of any involvement in the crime—if that is what Margaret’s death was—and the police were happy with the alibi he provided for New Year’s Eve.  One assumes that a good Scotsman would be spending Hogmanay with friends and relatives.  He remained in London for a short while after the inquest, but soon moved back to Scotland, where he married a wealthy widow in 1896, and married again after her death in 1917.  He died in 1935 with not a single public record casting aspersions on his character.

SUSPECT TWO: THE  POLICEMAN
John Hewitt, the plain clothed policeman, just happened to be walking down Linden Gardens as Margaret was out on the street trying to find a constable, and Margaret just happened to speak to him.  An interesting question is why a woman who was so terrified of being alone invited Hewitt, a complete stranger, into her house, and actually told him that she was on her own.  But the more urgent question is whether he had anything to do with Margaret’s death. 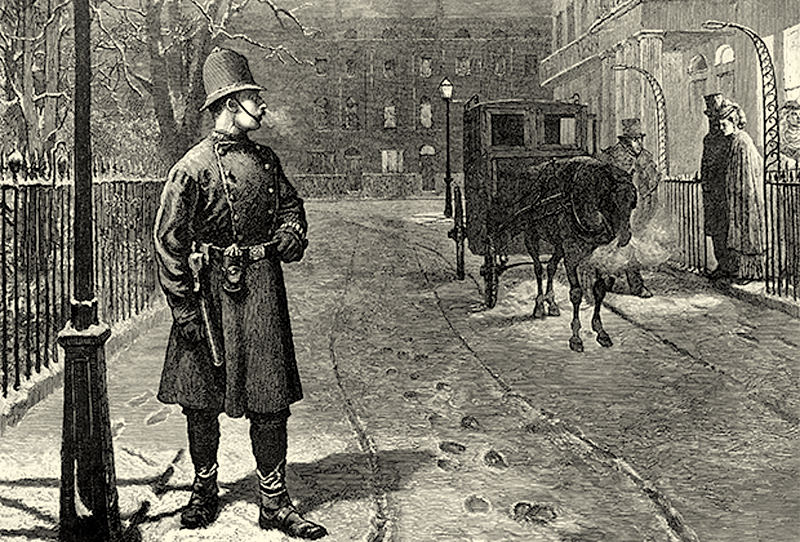 A London policeman, clearly not in plain clothes, keeping an eye on the comings and goings.

The fact that he told a colleague at the police station about his strange meeting with Margaret certainly suggests that he had nothing to hide, but it does not put him completely beyond suspicion.  He might have been planning to return to the house for nefarious reasons, and hoping that no one would reasonably suspect a man who appeared to incriminate himself.  Then again, he might have misread the situation, and returned later because he imagined that Margaret was propositioning him—after all, Ida Trump said that she had not heard the door being closed after him earlier in the evening.  But thereafter no suspicions fell on John Hewitt.

SUSPECT THREE: THE MAID
Early on Margaret Bowyer Flemming’s behaviour made her a suspect.  As arranged, she arrived back in London on New Year’s Day, which was a Wednesday.  She found that the gas lights were still lit, which was unusual, and as she went from room to room she saw no sign of her mistress.

There are several problems here.  First, it is odd that Margaret’s body was in the unused back bedroom, when she always slept at the front of the house.  Then again, it is not clear why Flemming, having started to search the house, did not go into the back bedroom.  Nor is it clear why the charwoman had to be summoned, given that she was due at the house early in the morning for cleaning duties. 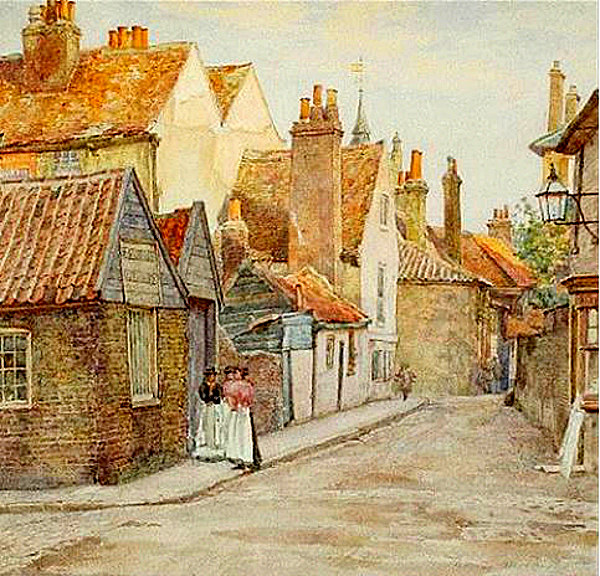 The police checked Flemming’s alibi, and her presence in Edinburgh was confirmed.  However, a further odd event occurred on the Thursday when Flemming and another charwoman, who had been sent down to Chiswick by Frank Bryden, returned from the pub after spending all day cleaning the house to find firemen dealing with a blaze that had started in the maid’s bedroom.  Although there were suspicions about Flemming, no evidence was presented that linked her to a possible crime.

SUSPECT FOUR: PERSON OR PERSONS UNKNOWN
The inquest jury were not prepared to take the police or the doctor at their word and accept that Margaret had been killed by her dentures.  They had heard that the first doctor who examined the woman, namely Dr Fountain, on removing the nightdress case from her mouth, had found her false teeth where you would expect them to be.  This directly contradicted the testimony of Dr Dodsworth, who, having performed the post mortem, stated that the plate was in Margaret’s throat.

Had a criminal—an opportunist—heard Margaret telling Ida Trump and the policeman that she was on her own in the house?  Or did someone know beforehand that Flemming was going to Edinburgh, and that her mistress would be alone in the house overnight?  Nothing was taken from the house, so could this have been a burglary gone wrong?

SUSPECT FIVE: THE DECEASED
Bizarrely, it was mooted that Margaret might have committed suicide by swallowing her dental plate.  I think that this can be dismissed as a gruesome suggestion put in place to remove suspicion from someone else.  After all, it was Frank Bryden’s solicitor who brought to the inquest’s attention a letter Margaret had written to her sister, saying that she did not think that she was long for this world. 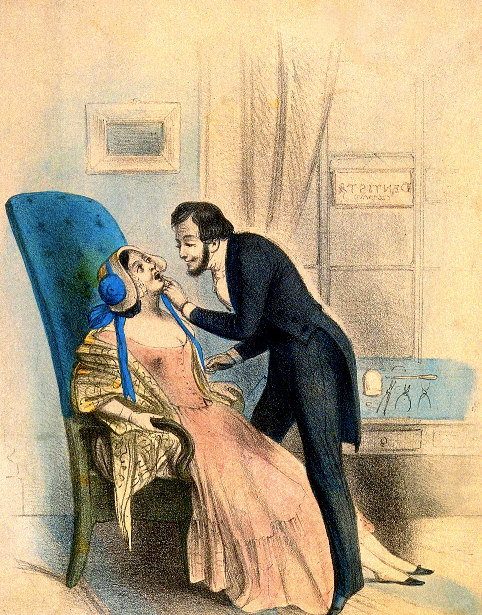 Coloured lithograph of a dentist peering at a patient’s teeth.

Walter Whitehouse, a dentist with premises at 8 The Sanctuary in Westminster, managed to get involved in the proceedings, presumably as an expert witness.  He was vociferous in declaring himself certain that this was a case of death by suicide, even when the coroner reprimanded him for forgetting that it was the jury’s responsibility, not his, to decide how the poor woman had died.

Even if Margaret had intended to do away with herself, questions remain.  Would she want to be found in a state of undress in her night clothes, for example?  And why select such a horrible and unreliable method of doing herself in?  Poison was easily available.  The river was only a short walk away.

SUSPECT SIX:  THE DENTURES
There are recorded cases, thankfully rare, of ill-fitting dentures causing death, particularly if the wearer was under the influence of alcohol.  It was suggested that Margaret inadvertently suffocated either while trying to get a grip on the plate, and remove it, or while trying to push it further down her gullet.  Dr Dodsworth was clear that the plate was too big to go down of its own accord.

George Ogilvie of Welbeck Street had been Margaret’s family doctor when she lived in Marylebone.  He told the inquest that Margaret had usually contacted him for treatment when inebriated.  He believed that she had accidentally swallowed her teeth.

THE END
The jury brought in a verdict of murder by person or persons unknown.  This did not please the police, who had decided that this was a case of misadventure.  There appear to have been no more investigations into poor lonely Margaret’s death.  It suited everyone that her demise was quickly forgotten. 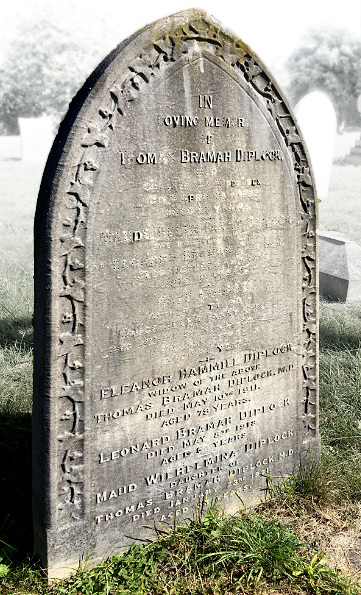 She was buried in the graveyard attached to St Nicholas’ Parish Church in Chiswick, far away from her family in Scotland, although in a strange twist the coroner, Thomas Bramah Diplock, would be laid to rest in a nearby plot two years later in 1892.  Her funeral expenses came to twenty-six pounds.  Her memorial, which can be seen to this day, is a grey granite Celtic Cross—a nod to her Scottish roots—with a barely legible brief inscription:

In memory of Margaret Louise wife of Frank Bryden died 1.1.1890

Her final will and testament makes poignant reading, showing her remembering those far away: her album for sister Charlotte, a diamond ring for sister Katie, a sapphire ring for sister Mary.  Her nephew, Ernest, received a copy of Ruskin.  Her “dear and most liberal husband” Frank Bryden received nearly three thousand pounds.

On Thin Ice, or, The Pleasures and Perils of Winter in the Parks