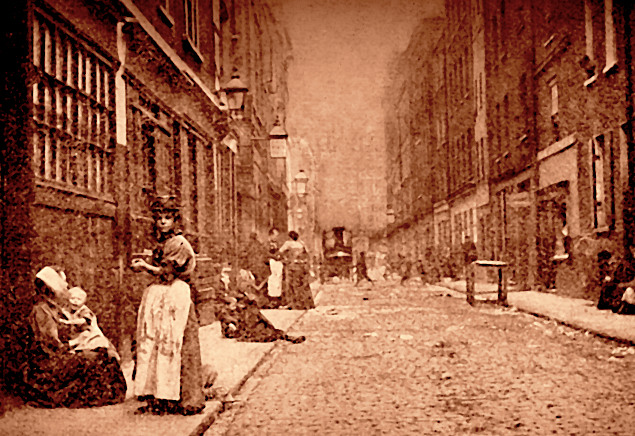 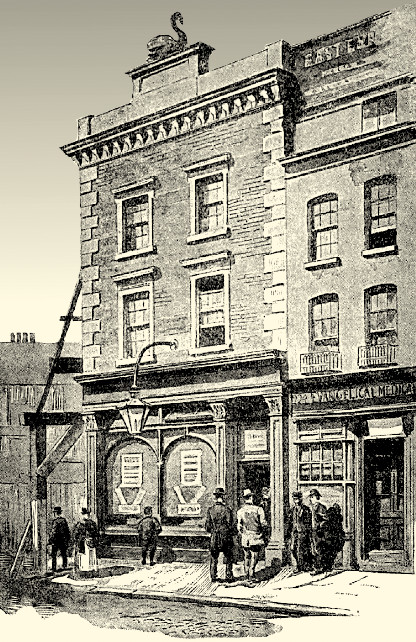 If you read my recent account of the crimes of Elizabeth Brewer, who stole boots from little children, you will remember that I promised that the name would come up again shortly.  Well, it is about to.  For the story I am now going to tell also concerns an Elizabeth Brewer.  However, the two Elizabeths are not the same.  Whereas the first was forty-eight at the time of her story, that is to say in the year 1866, the second was only sixteen at the time of hers, and that was in the year 1880.  The second Elizabeth had only just been born when the first was caught robbing poor John Spencer in Narrow Street in Limehouse.

As well as having the name of the protagonist in common, the two stories share the setting of the East End of London, and, more exactly, the Commercial Road.  Furthermore both must be read against the background of the deprivations of the London poor, and both involve the Stepney division of the metropolitan police.  But there, as you will see, the similarities end.

JOHN KERSTEN
The White Swan Hotel at 225 Shadwell High Street was once one of the most notorious drinking holes in the capital.  Attracting a volatile assortment of local hard men and crews from the ships in the docks, it offered a heady mix of drinking and dancing and much else besides.  Writers with a taste for the exotic and the dangerous gave it a gloriously bad press.  They described the vice and the degradation, the brawling and the killing, the bovine appetites that made its patrons easy prey for unscrupulous con men and abandoned women.  As one journalist put it, the White Swan was “perhaps the most frightful hell-hole” in all of London. 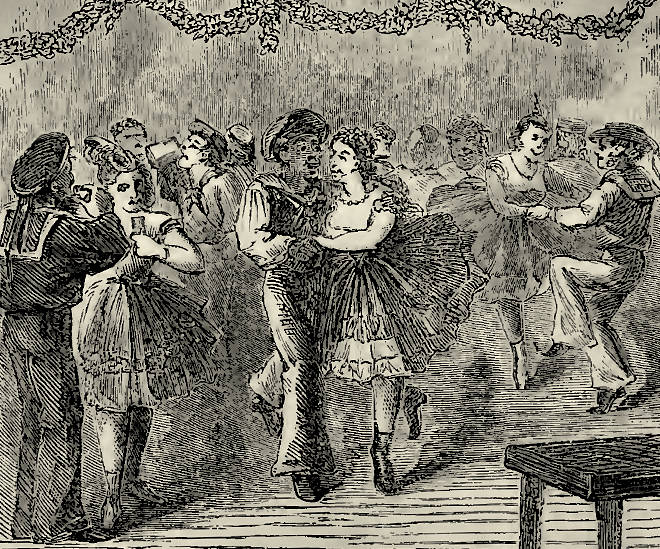 A sanitised impression of the bohemian frolics in the White Swan Hotel, or Paddy’s Goose, as it was known to the locals.  Image in Daniel Joseph Kirwan Palace and Hovel (1870) page 633.

Now on the 31st of October, which was a cold and blustery Sunday, Elizabeth Brewer came to the White Swan Hotel in search of work.  The owner, John Kersten, took her on.  But within a matter of days he could see that she was struggling with the work, which necessitated long hours on her feet.  He guessed from her appearance that the girl was pregnant, and, when he questioned her, she admitted that she was.  He told her that she would have to leave.

And so on Sunday the 7th of November, at about three o’clock in the afternoon, Elizabeth left the White Swan Hotel.  She asked Kersten if she could leave her belongings until she was sorted.  He agreed, and the next day, as arranged, Elizabeth came to collect two parcels, which appeared to be all that she had in the world.  Kersten had not noticed the parcels when Elizabeth had arrived the week before, but he did not ask about them, and minutes later she was gone.

MARGARET KELLY
Once long ago, where the eastern reaches of Mile End begin to peter out, there was a Victoria Road.  Now gone, in 1880 it ran from Old Ford Road up to Duckett’s Canal at the southern edge of Victoria Park.  The dwellings along its length were modest, their occupants working men and women, in the main, who lived cheek by jowl in rooms packed to the rafters.  And in one of these crowded houses—no.8—lodged a woman by the name of Margaret Kelly. 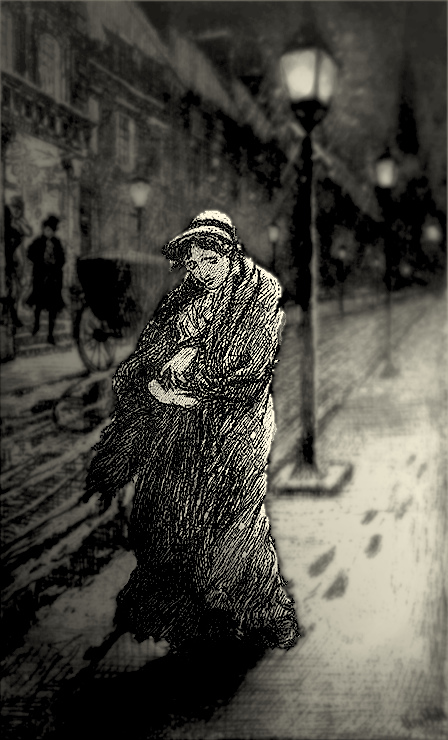 This engraving, A Winter’s Night by William Hole, could almost have been a depiction of Elizabeth Brewer wandering the streets in late November.  Image in William Ernest Henley and Thomas Finlayson Henderson The Poetry of Robert Burns volume 1 (1896) between pages 224 and 225.

Late on Monday the 8th of November, at about half-past eleven, Margaret was out and about when she spotted something that made her stop.  Some men were standing around the huddled figure of a young girl, who was sitting on a doorstep, holding two parcels.  Seeing that she was in great distress Margaret asked her what the matter was, and through her tears the girl said that she had no place to go to.  “What is your name?” Margaret asked.  “Elizabeth,” the girl replied.  “Well, Elizabeth,” Margaret said, “you can lodge with me.”

Margaret led Elizabeth to the house in Victoria Road, where she gave her a room with a bed and a cupboard.  She observed her closely as she stowed her parcels in the cupboard.  Then, struck by her poor physical condition, Margaret put it to Elizabeth that she must have recently given birth.  She was met with flat denials, which bothered her, as did the girl’s curious habit over the next few days of taking the parcels out of the cupboard when night fell, and sleeping with them under her head.  On the Thursday, when there was a sickly smell in the room, Margaret demanded to know what was in the cupboard.  “There is nothing there that belongs to you,” Elizabeth said, standing in the way.

On the Friday a further bizarre incident upset Margaret, when in the evening Elizabeth went out without saying where she was going, and stayed out all night.  On the Saturday she did the same.  And on the Sunday, when she did not return, and with the smell in the room now becoming intolerable, Margaret opened the cupboard.  With thumping heart she untied the two parcels, and peered inside. 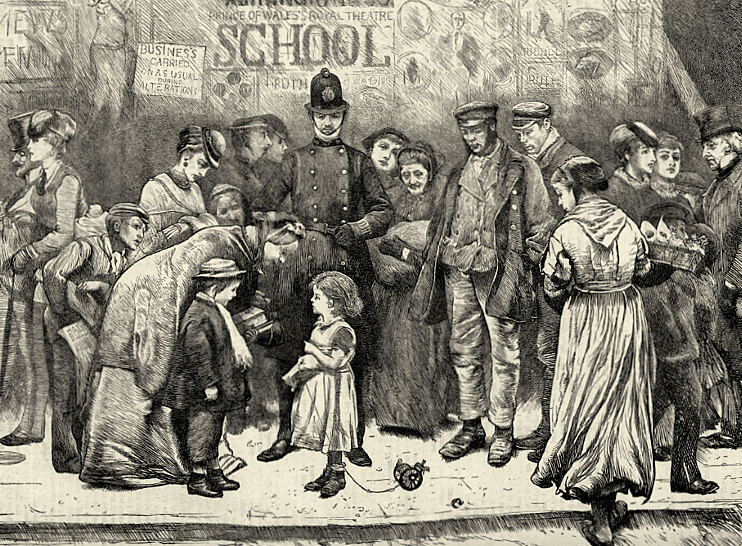 A policemen takes a sympathetic interest in the plight of a child lost in a city street.  Image in The Graphic 8 January 1870.

WILLIAM NICHOLAS
On the night of Sunday the 14th of November a Stepney Division police constable by the name of William Nicholas was on duty in Philpot Street when he heard excited voices.  He hurried down into the Commercial Road, where people were staring at a young girl who, clutching a parcel, was walking through their midst with a dazed and distracted look on her face.  When Nicholas asked her where she lived, the girl said that she had been living in Victoria Road, but had been ordered to leave.  “And what is that in there?” he asked as he reached out to open the parcel.  Elizabeth stared up at him, tears filling her eyes.

With the awful truth of the matter now apparent, a sombre silence settled over the crowd of horrified but sympathetic onlookers.  However, the constable was obliged to take Elizabeth to the police station in Arbour Square, and, because she was on her last legs, he sent for a cab.  When they got there, Nicholas called for Dr James Horton, a police surgeon, who verified that Elizabeth had indeed recently been delivered of a child, and that the child in the parcel was therefore in all likelihood hers.  Elizabeth told Horton her story, beginning with her brief stay at the White Swan Hotel.  She went on to explain that when her labour started she had been in the Commercial Road.  She had been in great pain, and then, in a matter of a minute or two, the business had been done. 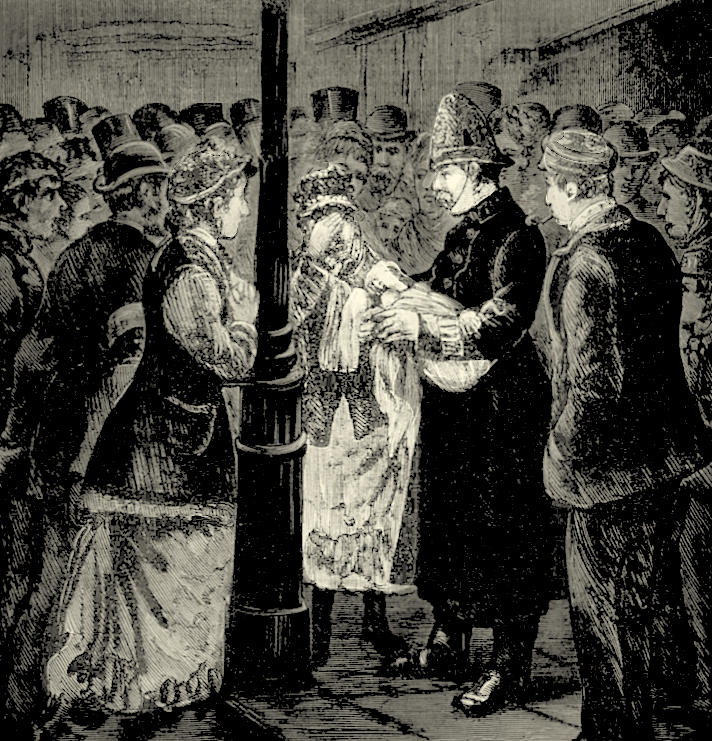 The story of Elizabeth Brewer appeared in The Illustrated Police News on 27 November 1880.  The accompanying report left it unclear whether William Nicholas unwrapped the child’s body in the Commercial Road, as shown here, or at the police station in Arbour Square.  But the image powerfully conveys the despair of the girl and the sombre concern of the crowd.

ELIZABETH BREWER
On Thursday the 18th of November an inquest was held in Mile End under the auspices of John Humphreys, the coroner for the Eastern District of the County of Middlesex.  The witnesses were John Kersten and Margaret Kelly and William Nicholas.  The jury, guided by the police surgeon’s medical evidence, concluded that Elizabeth’s child had been stillborn.  And there one might think that the sorry matter must come to an end.

But the law saw it differently, for concealing a birth was, and still is, a crime.  Elizabeth would be charged, and would have to explain to the police court in Arbour Square what she had done, and why.  Even so, justice would have to wait, for Elizabeth was very ill.  The surgeon had sent her to the Mile End Infirmary, where, quite possibly, she died.

If there is nothing to say that she did die, equally there is nothing to say that she did not.  So much about her—the befores and the afters—is wrapped in silence.  The facts are few.  She was the daughter of a gamekeeper, Joseph Brewer.  She had many brothers and sisters.  She came from Bramfield in Hertfordshire, and went to the National School there before moving down to London.  She was pregnant at fifteen, a mother at sixteen.  And she carried the body of her child in a parcel—at once a cradle and a coffin—until she was discovered late one night alone in the Commercial Road.

The Girl in the Dolly Varden Hat, or, The Suicide of Alice Blanche Oswald

The Poor Little Dear, or, The Sad Story of Sarah Gough