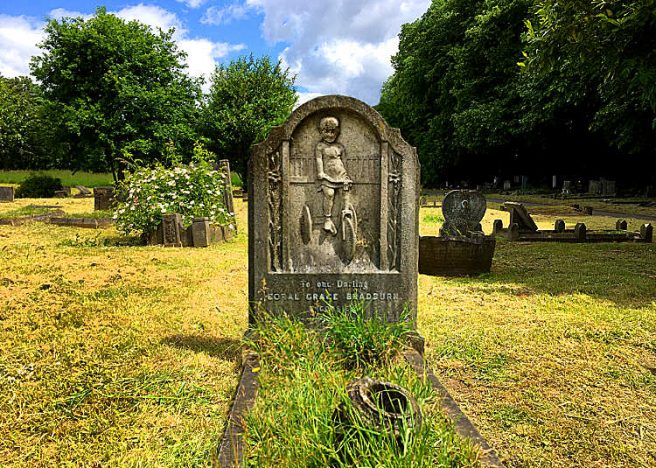 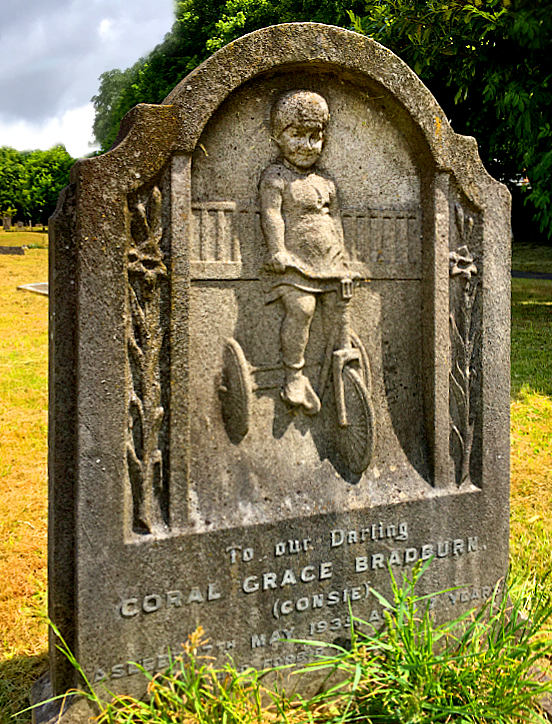 The grave of Coral Grace Bradburn in Streatham Cemetery in Tooting.  © William Ellis-Rees

It was while hunting for another grave in Streatham Cemetery in Tooting that I came across a gravestone bearing a relief carving of a little girl riding a tricycle.  The child smiles proudly.  She wears a short-sleeved summer dress, ankle socks and T-bar shoes.  Wavy or curly hair peeps out from under what is either a peaked cap or a cloche hat with a band—I do not think it is a cycle helmet.  The individuality of the image and the personality of the child suggest that the stone mason worked from a photograph taken when the little girl was still alive.

Even in bright sunshine a visit to a cemetery can be a melancholy occasion.  But a child’s grave is always particularly poignant, evoking thoughts of time cut short and the what-might-have-beens.  My initial assumption was that a seven-year-old dying in 1935 may have succumbed to one of the childhood illnesses prevalent at the time.  Although penicillin was discovered in 1928, the first civilian use was not until 1942.  Most of the vaccines for common childhood illnesses—measles, mumps, polio—were not developed until the 1950s and 1960s, and even the TB vaccine, which had been discovered in the 1920s, was not widely available until after the Second World War.  But there was something about this smiling child, merrily pedalling her smart tricycle, that made me want to know more.

To our Darling
CORAL GRACE BRADBURN.
(CONSIE)
AGED 7 ASLEEP 7TH MAY 1935 AT REST.
AND FORBID THEM NOT. 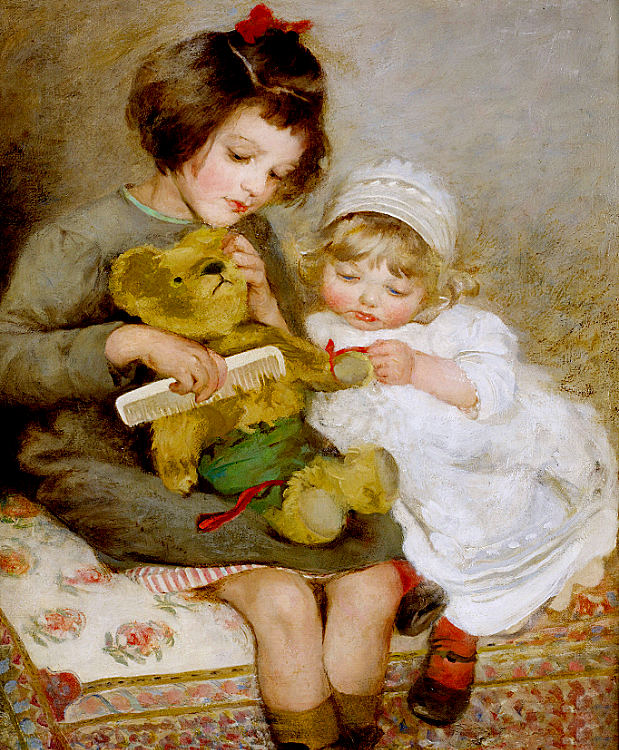 “Forbid them not” is taken from chapter 19 verse 14 of Matthew’s gospel in the King James Bible: “But Jesus said, Suffer little children, and forbid them not, to come unto me: for of such is the kingdom of heaven.”

A search in the newspaper archives for a child rarely reveals much.  In this case an initial search by name came up blank: optical character recognition of newsprint can be problematic.  Another reason why little Coral was hard to find was that syndicated newspaper stories repeated an incorrect shorthand transcription of her name as Carrella rather than Coral Grace.  But finding her father’s name through another source led to a slew of articles that gave full details of the tragic story.

IN CLAIRVIEW ROAD
It was Tuesday the 7th of May 1935—the day after the May Bank Holiday—and Mrs Emily Ada Bradburn, who was thirty-four years old, was at home at 21 Clairview Road in Streatham Park.  The Bradburn family had lived in this charming Edwardian semi for the past two years.  It was well situated within reach of the shops and facilities of Streatham, Tooting and Balham, the only slight downside being the looming presence of the nearby Tooting Bec Mental Hospital behind its high brick walls.  I have not been able to find out where the Bradburn children went to school, but as an educated guess I think it was probably Furzedown School in Welham Road. 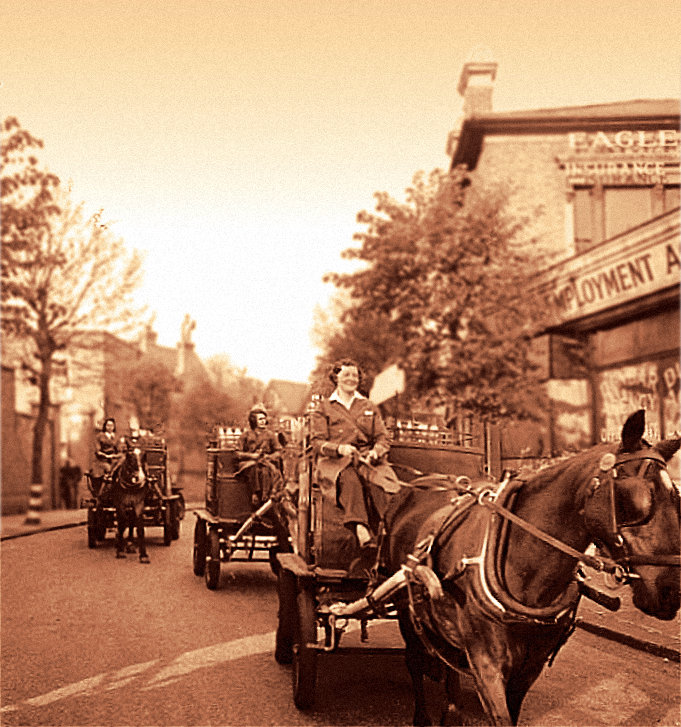 At home with Emily were her children: a baby under the age of one, seven-year-old Coral Grace, and others whose names I have omitted for reasons of privacy.  Now Consie, as Coral was known to her family, may have been outside playing in the street with her siblings or friends, for this was a time when there were relatively few motorised vehicles on the roads, and children would spend all day outside.  At some point a horse-drawn milk cart driven by John Harold Dennison—commonly known as Jack—appeared in Clairview Road.  He too lived locally, at 43 Fallsbrook Road in Streatham.

Putting the brake part on, Jack hopped down and went to no. 21 to do business with Mrs Bradburn.  Meanwhile Coral and two other small girls made a fuss of the horse, who was known to be docile creature.  Balancing a sugar lump on a tennis racquet she offered it to the horse, something she had done every morning since she had moved to Streatham Park with her family. 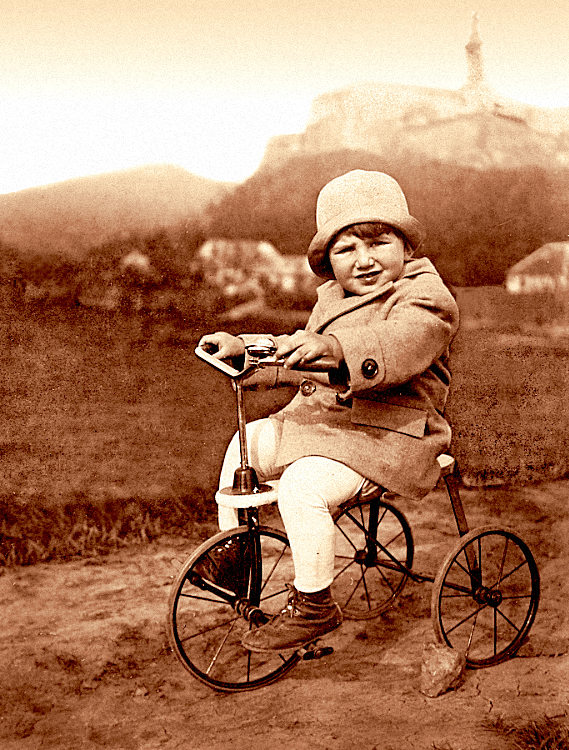 A little girl on a tricycle.  Photograph dated c.1929.

A TRAGIC ACCIDENT
Much of what happened next comes from an account given by an eyewitness, who was cycling from Thrale Road along Clairview Road.  His name was Clifford Ninian Davies, and he lived at 69 Calbourne Road in Streatham, and was himself a milkman.  He saw the three little girls near the milk cart, and he remembered noticing Coral offering Jack Dennison’s horse the sugar lump.  But before the horse could eat the sugar lump it fell off the racquet and landed on the ground.  Coral bent down to pick it up, and in doing so she accidentally nudged the horse.

The horse took fright and shot his head up, jostling the milk cart and making the glass bottles clatter together.  It is likely that he was wearing blinkers and was unable to see what was happening, and the resulting noise frightened him more.  He moved forward, kicking Coral at the base of her skull, and then, as he bolted, the cart ran her over.  While others hurried to help the stricken child, Clifford Davies jettisoned his bicycle and sprinted to catch the horse, who, still dragging the milk cart, was now out of control.

What time the accident happened is unclear, but at one forty-five in the afternoon Coral was admitted to St James’ Hospital, which stood nearby in Sarsfeld Road in Balham.  William Leonard Maccormac, the hospital Medical Superintendent, announced that the child had suffered a fractured skull.  Her father, Harry Llewellyn Bradburn, who was at work as night editor of the Daily Express, was only informed of the accident at twenty past one.  He hurried to the hospital, where Coral lay unconscious. 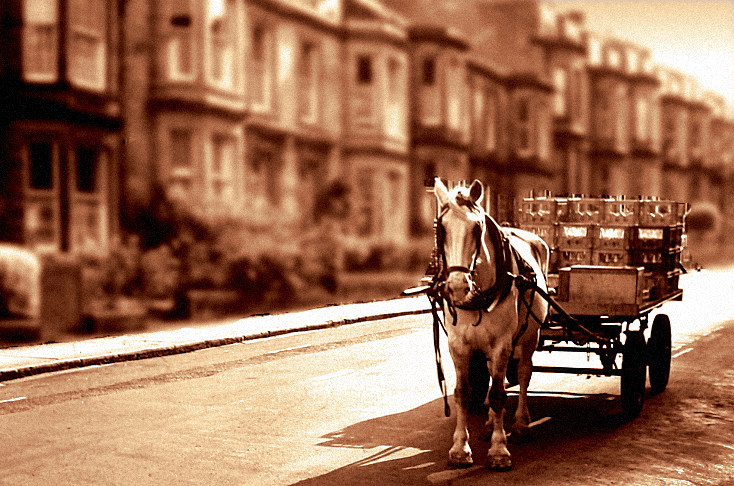 Photograph of a horse-drawn milk cart taken in Edinburgh in 1981 and “aged” by London Overlooked to suggest a 1930s scene.  © Kim Traynor

To the surprise of the medical staff, the little girl briefly regained consciousness, which enabled her to tell her father about the accident.  Tragically, she lapsed back into unconsciousness, and expired at seven fifty that same evening.  How poignant it is that in a photograph on Lambeth archives’ website the children of Furzedown School can be seen celebrating the Silver Jubilee of King George V on the 8th of May, which was the day after Coral’s death.

NOT TO BLAME
Coral Grace Bradburn was buried in Streatham Cemetery on Saturday the 11th of May at two thirty in the afternoon.  The funeral was organised by the local firm of undertakers, Alfred Smith, with the Reverend Ernest Henson, the vicar of St Paul’s Church in Chillerton Road, conducting the service.  A sad side note.  Another child, Basil Norman Johnson, who was six years old, was buried in the cemetery on the same day.

An inquest was held on Friday the 10th at the Battersea Coroner’s Court in Sheepcote Lane before the local coroner, Dr Edwin Smith.  After giving evidence the humane Harry Bradburn stated that the driver was in no way to blame and that the horse was a quiet animal.  The coroner agreed, saying that “No-one could be blamed for the tragedy, which was lamentable and deplorable”. 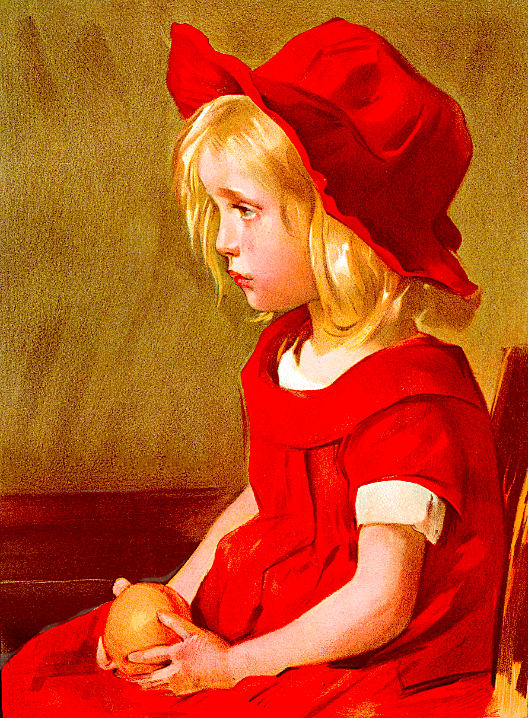 Girl with an orange.  Lithograph by Louise Catherine Breslau in L’Estampe Moderne volume 2 (May 1898 to April 1899).

As one might expect, the newspapers said nothing directly about the little girl’s character in accounts of the tragedy, nor for that matter in reports on the inquest.  But I think that we can surmise that Coral was fond of animals, as she regularly gave the milkman’s horse treats, that she was a sociable child who liked to play tennis with her friends in the road, and that she enjoyed cycling on her trike.  I also think that we are on safe ground in assuming that she was much missed by her parents and siblings.

IN STREATHAM CEMETERY
Unfortunately, less than five months later, death would once again visit 21 Clairview Road.  On Saturday the 5th of October Harry Bradburn died at home.  He was thirty-five and died of cirrhosis of the liver, a condition which may have been aggravated by the death of his daughter.  His obituary states that he had been ill for some time, but if this is true the severity of his illness was not recognised, for he failed to make a will.  Hailing from Barnsley in Yorkshire he was a successful newspaper man: having progressed from tape room boy to editor he worked for the Sunday Express, the Globe and the Daily Express.  He was buried in Streatham Cemetery on Tuesday the 8th of October 1935.  Again, the firm of Alfred Smith organised the funeral, and the service was conducted by the Reverend Reginald Philip Ernest Cheesman of Christ Church Streatham.  Harry’s grave is close to Coral’s, but no gravestone is visible—it may have fallen over or be hidden by vegetation.  Emily, of course, may not have been able to afford one. 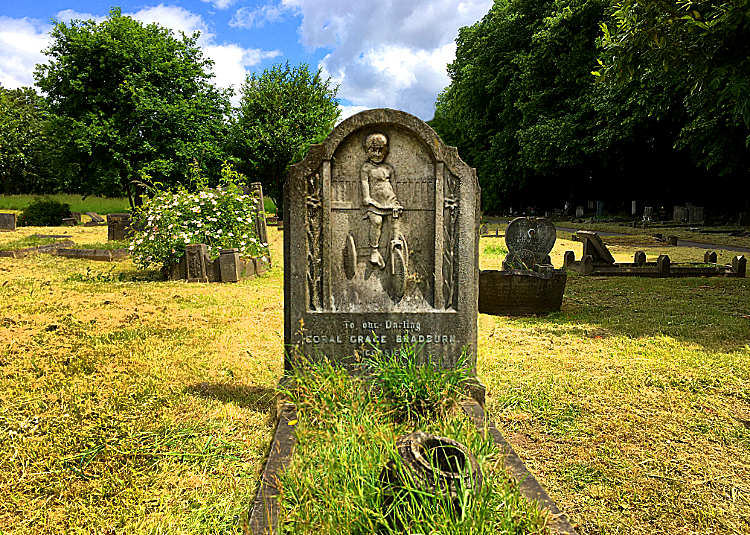 The grave of Coral Grace Bradburn in its setting in Streatham Cemetery in Tooting.  © William Ellis-Rees.

The impact of Coral’s fatal accident, so closely followed by the death of Harry, must have been terrible for Emily and her children.  They appear to have moved soon after from Streatham Park to Luton.  One hopes that life there treated them more kindly.  As for Jack Dennison, the milkman, he too must have been deeply affected by what had happened: he was the father of two boys under the age of five at the time.  It is not known if he was able to keep his job, for he admitted that the brake of the milk cart had been only half-on, although, as this may well have been common practice on a milk round, there is no suggestion that he had been negligent.  Maybe he decided quite simply that it was time to move on, for by 1939 he was working as a trolley bus driver.  He too has a sad link with Streatham Cemetery: his young wife was buried there in 1938.  Ingrid Dennison was a native of Norway, and was only twenty-eight when she died.  Her grave, like that of little Coral’s father, has not been identified.

A House in Wandsworth, or, The Life and Death of Henry Stowe Bell