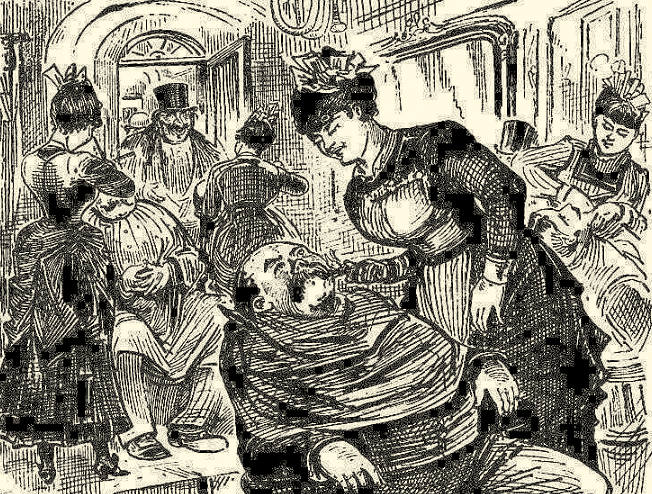 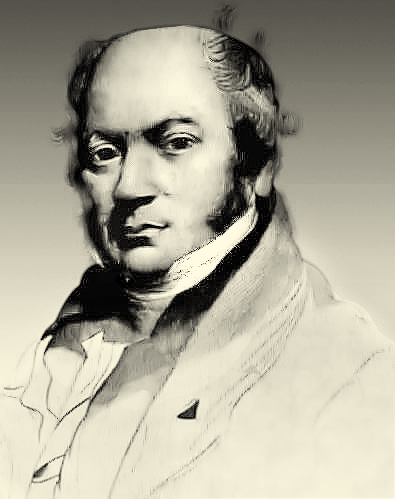 A clean-shaven John Thomas Smith.  Engraving by William Skelton from a drawing by John Jackson.

On the 28th of February 1894 a case was brought before Court no. 9 of the Queen’s Bench Division of the High Court of Justice in the Strand.  The plaintiff, Charlotte “Lottie” Chettle, a young woman in her early twenties from Swansea, was bringing a claim against Arthur Wicks, a self-styled barrister, for breach of a promise of marriage.  She was hoping to recover damages.

When Lottie identified herself to the court, and gave her occupation as “barber”, a rather astonishing thing happened.  People laughed.  And the urgent question—Why did they laugh?—is the subject of this post.

RAISING EYEBROWS
Before the Victorian era the female barber did in fact feature in London lore.  Her image, though, was not especially flattering, at least not if the popular seventeenth-century ballad of the five “mad Shavers” of Drury Lane—all women, and all guilty of violent and disorderly conduct—is anything to go by.  And although girls of respectable families are known to have been apprenticed to barbers, it is likely that they were hoping to find husbands by freely consorting with their gentlemen customers. 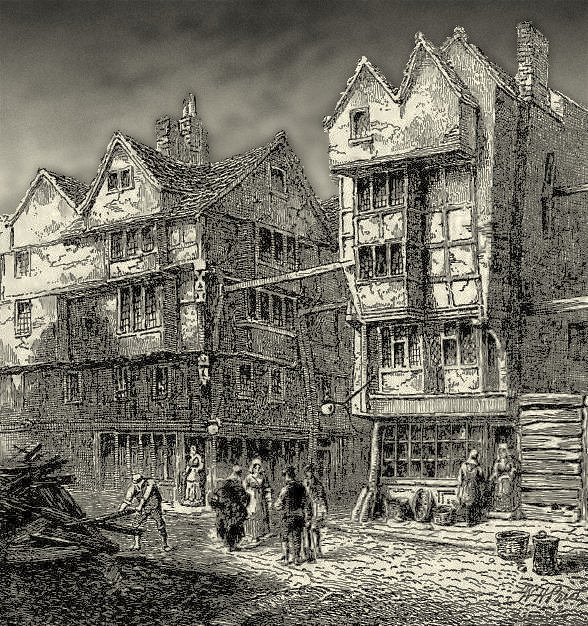 Certainly in the early years of the nineteenth century the woman who shaved for money was a lowly and disreputable figure, and using her services tended to raise eyebrows.  The antiquarian John Thomas Smith, in his 1815 work on the sights of the capital, relates how he had once crept into the dark interior of Seven Dials in order to be shaved by a woman who plied her trade in Great St Andrew Street.  The experience obviously made quite an impression on him, as he recalled a “slender” woman with a “strapping soldier” of a husband, who sat smoking a pipe and keeping a watchful eye on what was going on.  The writer definitely felt that he had taken a walk on the wild side!

Conservative Victorian tastes must have found the whole business fraught with suggestions of indelicacy.  More robust sensibilities probably worried less, which is why the female barber was a common sight on the stage.  No doubt Miss Fitzwilliam—who played the pretty Barbara Sharp at the Lyceum in Wellington Street, and was dubbed a “Figaro in petticoats” by a Daily News theatre critic—and Miss Cooper—who played a similar role at St George’s Hall in Langham Place—had the men in their respective audiences in raptures. 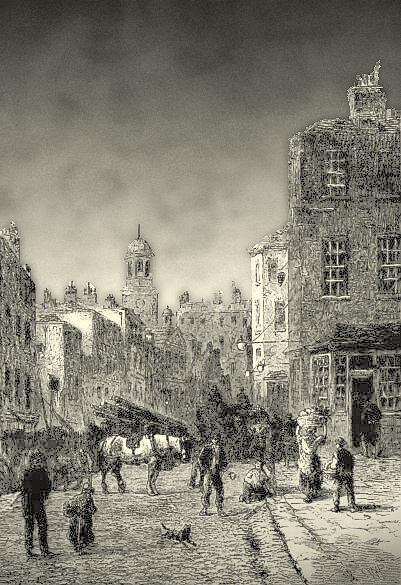 Swallow Street, off Piccadilly, during its demolition in 1815.  Illustration in Edward Walford Old and New London volume 4 (1897) p.247.

BACK TO COURT NO. 9
And so it was that when Lottie Chettle announced in court that she was employed in a barber’s shop, there was laughter.  Women like Lottie, even as late in the century as 1894, were still regarded with amusement, as if only a man was even capable of shaving another man.  The attitude is well illustrated by the anecdote of Edward Cleathing Bell, a solicitor who, finding himself about to be shaved by the widow of a recently deceased barber, spluttered in protest that “he would never submit to be taken by the nose”—a technique for raising a face to meet the razor—“by a woman”.  Later a close-shaven Mr Bell was forced to concede that his tormentor had in fact “discharged the office uncommonly well”.  How condescending!  Other examples of Victorian men surprised by the dexterity of women with razors abound.

Arriving in London from her native Wales in the early 1890s, Lottie had been employed by a Louisa Grosse, the proprietress of the Lady Barbers’ Association at 65 Chancery Lane.  This late Victorian salon enjoyed a degree of celebrity.  The original owner, a man by the name of William Thornton, had started the business by advertising for respectable young women willing to learn a trade that would earn them between 17s and a guinea a week.  He received over a hundred applications, and whittled these down to three.  Along the way he had to deal with an outraged mother who “would allow her daughter to be a barmaid” but “couldn’t see the morality of her getting her living as a barber”! 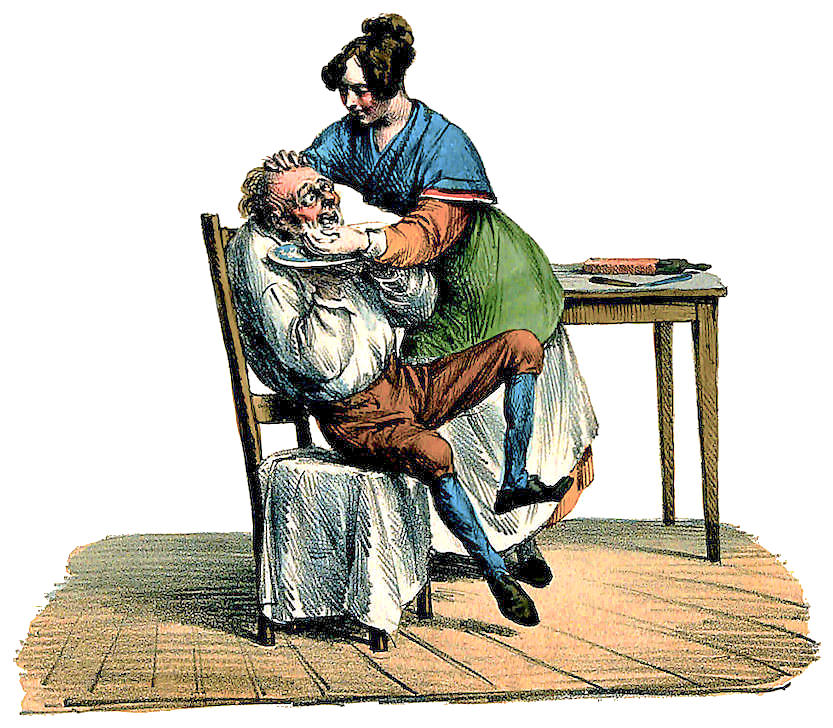 A female barber lathering the face of a nervous man.  Coloured lithograph by Pierre Langlumé after Edme-Jean Pigal.  Credit: Wellcome Collection  CC BY

Mrs Grosse’s establishment was in a tenement, New Stone Buildings, which comprised business premises and solicitors’ offices.  Located in the heart of legal London, the address sounds decidedly grand.  In fact it was rather dreary, and we know this because when Karl Marx’s daughter Eleanor was living there in a top-floor flat, a Russian writer-friend described the “dim gaslight of the endless staircase” which had “entirely preserved the Dickens spirit of commercial slums”.  Working in this unprepossessing building, poor Lottie Chettle became entangled with the unscrupulous Arthur Wicks.  At this point we could tell an interesting story of cynical deception and empty promises of marriage that ultimately cost Wicks £300 in damages.  However, the real point is that nobody other than Lottie’s prosecuting counsel, Edward Abinger, took her seriously.  Such was the fate of the Victorian female barber.

AND NOW NELLIE WICK
But an even sadder story is that of little Nellie Wick.  (No connection with Lottie Chettle’s seducer—his name ends with an “s”.)  Born Ellen, she was the daughter of a professional barber, Edward, who made a name as a public performer.  Calling himself Professor Teddy he entertained audiences with his prodigious speed and dexterity.  In 1887 at the Royal Aquarium in Westminster, which was a music hall of sorts, he won £100 by shaving eleven bold individuals in three minutes thirty seconds, seeing off a rival by a margin of only five seconds.  Then in a bravura solo display he shaved another three wearing a blindfold.  In later years he would go one stage further by shaving with a blindfold and with one hand behind his back.

Nellie had two brothers, and really one wonders what sort of childhood Professor Teddy allowed his offspring to have.  They worked alongside their father—and their mother, who was also a shaver—at his Globe Toilet Saloon at 418 King’s Road in Chelsea.  Even the youngest, a three-year-old boy, was employed lathering the customers.  But it was Nellie who was most readily exploited, for, in addition to her precocious technical skill, she had a childish feminine appeal.  Certainly the reporter for The Pall Mall Gazette who was sent to write a piece on the Professor found himself spellbound:

Little Nellie is a sweet-faced mischievous-eyed little bird of four, with hair the colour of old gold and eyes as blue as the Neapolitan sky, and with a joyous laugh that charms the heart of all her acquaintances.

But other details are more obviously disturbing.  Nellie’s fingers—the tools, as it were, of her trade—were tiny and plump.  She had to stand on a chair to reach the face she was shaving.  She had a favourite pair of razors with tortoise-shell handles.  She had been taught such professional phrases as “Hold your head over, sir, please” and “That’s right, sir, thank you”. 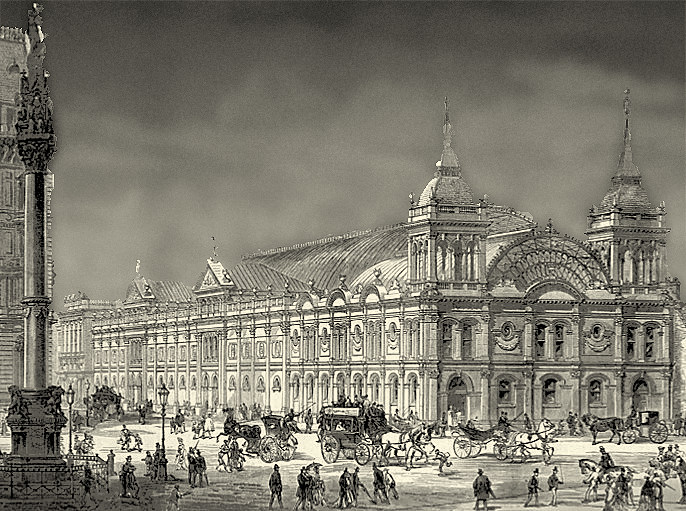 The Royal Aquarium in Westminster.  Image in The Illustrated London News 9 October 1875.

The Gazette published its article in August 1889, by which time Nellie had already stunned London by shaving five men in twelve minutes at the Globe Toilet Saloon.  But the bigger stage was the Royal Aquarium, and, alongside assorted adult entertainers, she wielded her razors to the accompaniment of a band playing “The Voice that Breathed o’er Eden”, which, as The Leeds Times pointed out with ill-concealed irony, was “a hymn for marriage” and “not for shaving”.  Interestingly, in order for Nellie to perform at the Aquarium, her father had to get a permit from a local magistrate.

THE END OF NELLIE AND EDWARD
The years went by, and Nellie continued to perform.  She travelled if not the world then certainly England and Wales.  Inevitably she was used to endorse products, as the following advertisement, printed in The Illustrated Sporting and Dramatic News in 1920, demonstrates:

RAPID SHAVING.  Some years ago, lit’le Nellie Wick shaved 10 men in ten minutes with a “Mab.”  This remarkable feat would have been impossible with any other razor.  For safe, rapid and easy shaving, try the little keen-bladed “Mab.”  25 years’ Reputation.  Black Handles 4/6.  Ivory 8/-  Of all good Ironmongers and Stores.  “MAB” Co. 73J Newhall St., BIRMINGHAM.

Her young life was an odd blend of stage-hall fantasy and mundane reality.  Another reporter, hoping for an interview, found the “chatty little” father but not “the young lady” herself, for the very good reason that she was at school.  The Professor had nothing to say about his daughter’s education.  But he proudly told the reporter that she was in the shop every evening, shaving her regulars.  There was a future for her in shaving, he said.  “Many a barber with a good connection would give me three pounds a week for her services now,” he went on.  “And as for tips—well, there!”

But in fact the wretched Nellie had no future.  For in 1907 her career came to an abrupt end.  The family business had moved to Wellington Street in St Pancras, and Nellie lived round the corner in Arlington Road.  And there she succumbed to pulmonary tuberculosis.  She died in hospital one winter’s day, or night, in January, and was buried in the parish cemetery in a common grave.  She was twenty-one, and had been shaving men for the best part of her short life.