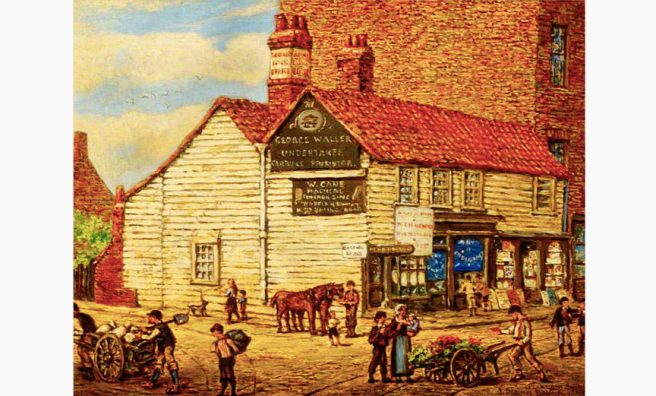 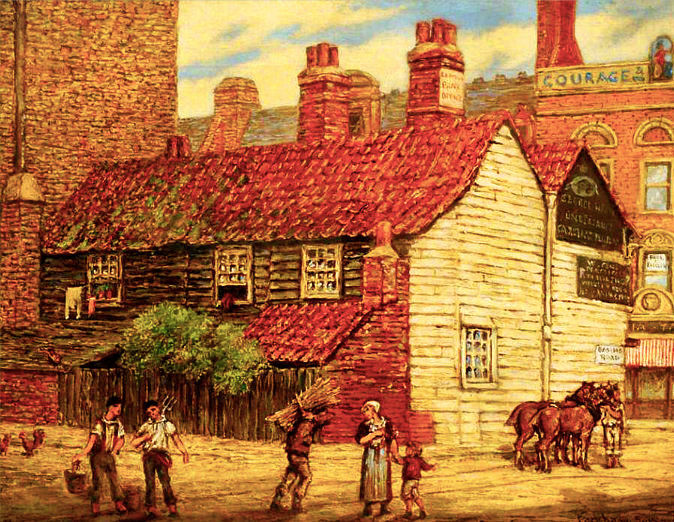 Among the hidden treasures of the British art world are two small oil paintings of South London by John Staines Babb dated 1896.  They are in fact a pair, showing the same scene from two different viewpoints.  Babb, who died in the early years of the twentieth century, is not an artist one is likely to hear about in the normal course of things.  He is a good example of what it is to be overlooked, and this, I think, is a shame. 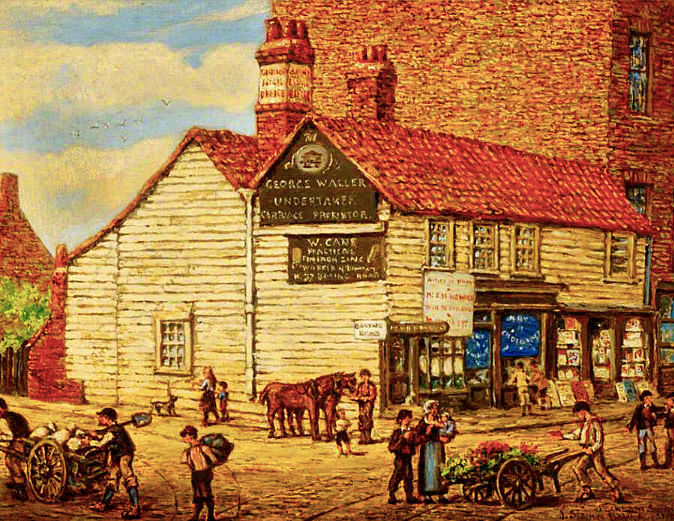 The houses were in Basing Yard in Peckham, just off the south side of the High Street, and close to Rye Lane.  Basing Yard has now gone, but it had a curious little history.  A Basing Manor once stood there, and was at one point owned by Sir Thomas Gardyner, who came from a Bermondsey family, and who died in the reign of Charles I.  Gardyner was a man of some consequence, and influential enough to have the ear of Dudley Carleton, the Secretary of State, on the subject of England’s tricky relations with Spain. 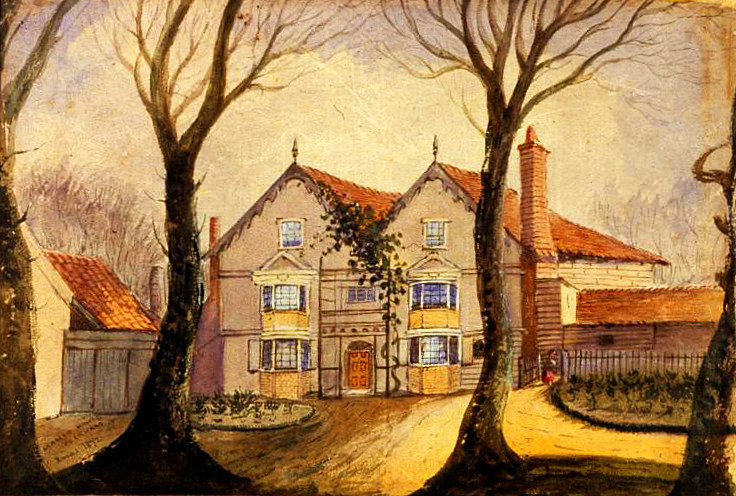 In 1630 he told Carleton that he was thinking of writing a book on the subject, but he was making no promises because his time was fully taken up with his real passion, which was cultivating fruit.  Little trace of Gardyner’s estate remains.  There is still a Melon Road, though, on the north side of the High Street, where once there had been fruit gardens, and later a Victorian educational establishment known rather charmingly as The Melon Ground Sunday School. 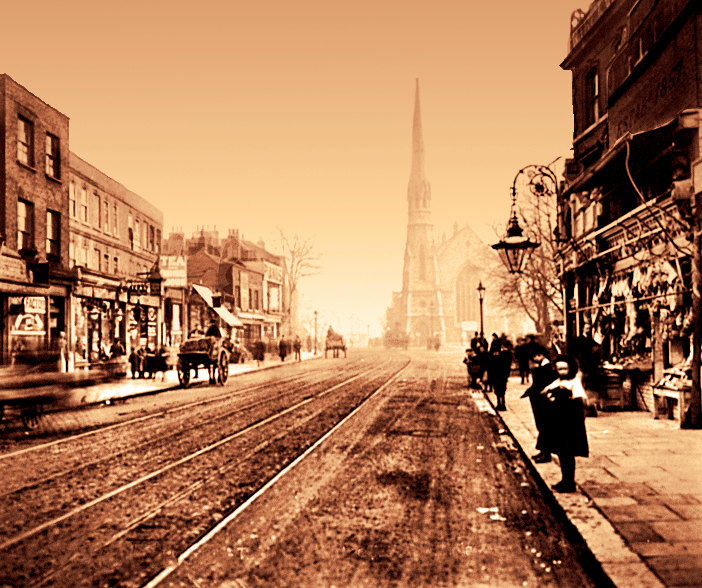 In order to paint his two views Babb stationed himself at the point where what was then Basing Road issued into Peckham High Street.  At the corner are two weatherboarded houses, now gone, which Babb has memorialised with a realism that gives the lie to the apparent simplicity of his style.  The names of two tradesmen, George Waller and William Gane, one an undertaker and the other a metal worker, can be made out on signboards.  And there are other delightful details: the shop windows at the front of one of the two houses; the plant pots and washing line at the rear of the other; a substantial brick edifice on the north side of the High Street, which was a public house, the “Britannia”, tied to the Courage brewery; a pair of horses in harness; hens scratching in the yard; and people, real Peckham people, pushing this and carrying that and generally going about their business without a thought for the artist painting a snapshot of their lives.

AN IDLE DOG
John Staines Babb was born in 1838 in, yes, Peckham.  His father, John Stevens Babb, was a saddler and harness maker.  His mother, Mary, had already given birth to three girls, one of whom, Charlotte, will become the focus of our attention later.  At the time the family was living in the High Street looking across the junction with Basing Road, and we might say that when Babb painted his two little oils of the weatherboarded houses, in his late fifties, he had in a sense returned home. 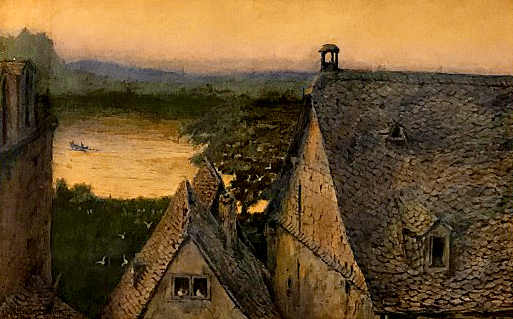 View over the Rhine at sunset.  Watercolour by John Staines Babb.

When he was still a small boy the family moved up from Peckham to Hackney, where Mary Babb died, aged fifty-four.  Her husband was by now living off the proceeds of a number of properties that he owned and rented out.  But before very long, in 1851, he too died.  He was in his late fifties—he was already a widower when he married Mary—and at the time of his death he was living in Clapham.  Both he and Mary were laid to rest in the churchyard of St Giles, not far from what had once been the family home in Peckham. 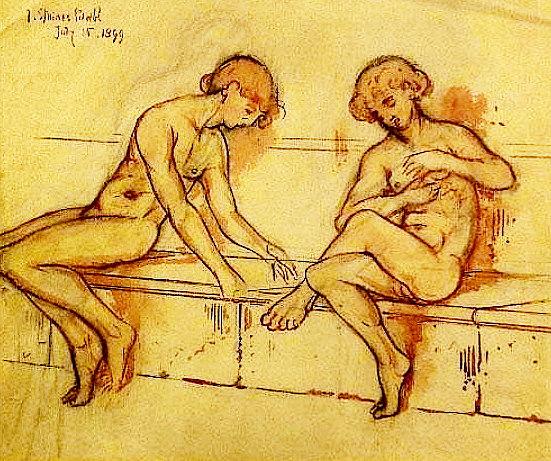 As a young man John studied at Trinity College, Cambridge, where he was admitted as a “pensioner” in December 1860.  As a “pensioner” he would have paid for his tuition and accommodation, and, if this indicates that he was well-provided for, then it is worth noting that at this time his sister Charlotte was living on independent means.  His tutor at Trinity was Joseph Barber Lightfoot, a distinguished theologian, but for reasons unknown he did not graduate.  A brief entry in the diary of one of the Trinity fellows—a man by the name of Joseph Romilly—rather suggests that he left under a cloud.  He and another undergraduate were called up before the college authorities—“they had both been idle dogs”—and that seems to have been that!

Watercolour frieze The Maker of the Song by John Staines Babb.  Image in The Builder 7 January 1905.

SHARING THEIR PASSION
But all the while Babb’s strong artistic leanings were beginning to emerge.  In the year of his admission to Trinity he painted a Gothic church interior in which the skilful foreshortening leads the eye to the stained glass window at the far end.  As time went on he was able to place his work in important exhibitions, and his name crops up in various catalogues.  He was capable of fine landscapes in both oil and watercolour, and a study of two young male models reveals a sensitive understanding of academic technique, which finds its fullest expression in the designs for classical friezes painted towards the end of his life. 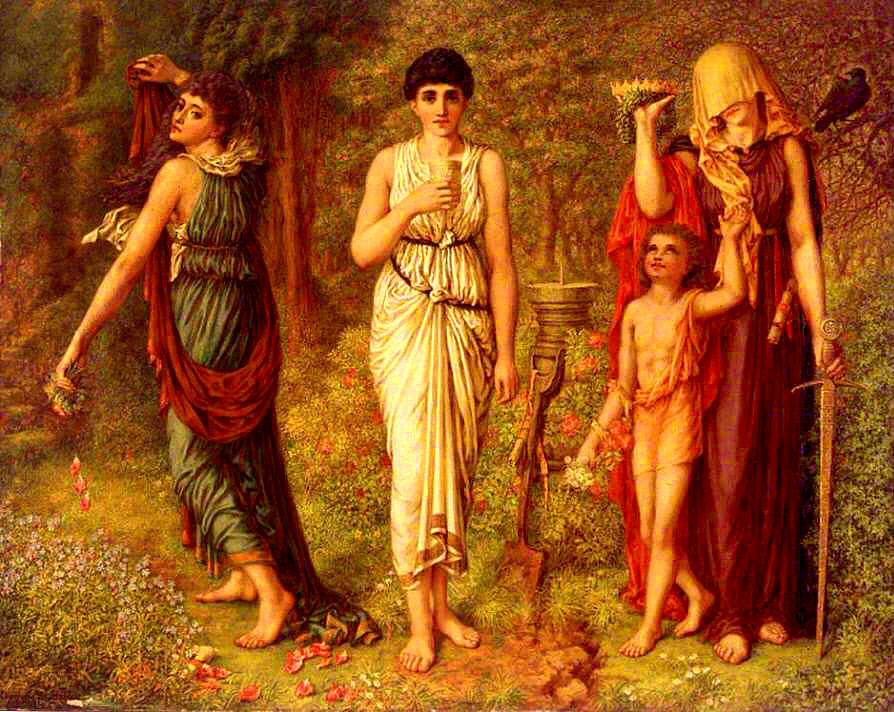 He did not marry, and neither did Charlotte, who, born in 1830, was the oldest of his three sisters.  They lived together—we know of addresses in Regent’s Park and Kentish Town—with a servant to keep house.  One imagines that they cultivated a refined sort of solitariness, the chief ornament of which was a shared passion for art.  For Charlotte too was a painter with exhibition credits, and there is evidence of her talent in her Yesterday, Today, Tomorrow, a charming exercise in rendering classical drapery in the manner of the Pre-Raphaelites.  Both worked as ceramic decorators, and we still have designs executed by John for Mintons and by Charlotte for Royal Doulton. 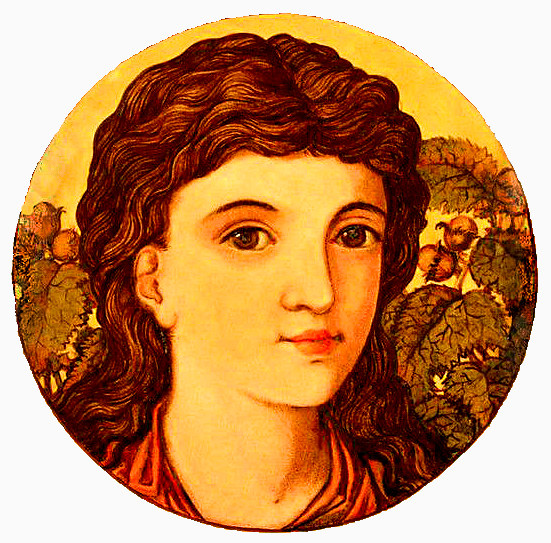 TAKING A STAND
Far from being an unworldly artist, remote from the realities of life in the nineteenth century, Charlotte was a committed advocate of women’s suffrage.  She even achieved a synthesis of these two driving passions by campaigning for the admission of women to the Schools of the Royal Academy.  Gaining access to these hallowed halls in Piccadilly in 1861—and she was in the first group of women to do so—was of signal importance. 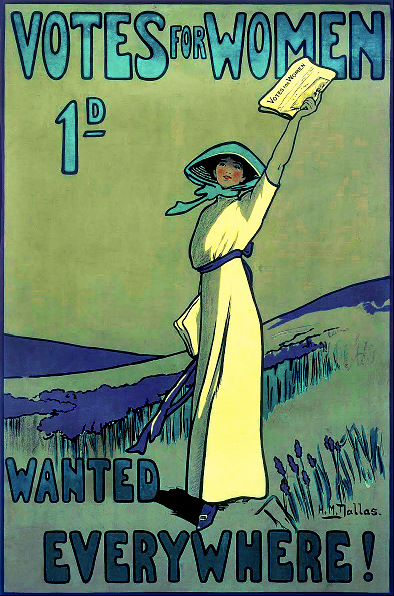 She had begun her training at the Heatherley School of Art and elsewhere—the British Museum, the National Gallery—and from the outset she demonstrated remarkable talent.  She worked indefatigably, and even when she sustained a serious accident to her right arm in her mid-forties, which forced her to undergo surgery, she resumed painting as soon as she was able to.  Her fond and admiring brother noted in the obituary he published in the Englishwoman’s Review in 1907 that Charlotte was working “at her easel” almost to the day she died.

The death of their twice-widowed father in 1851 effectively left Charlotte as the head of the family.  She had just turned twenty-one.  She was named an executor in her father’s will, along with a brother-in-law, Thomas Ferris, and she became guardian to John, who at the time was only thirteen.  Later in life John believed that these early responsibilities had encouraged Charlotte to develop her views on women’s independence.  She petitioned and leafleted endlessly on behalf of the suffrage movement.  But when she realised that nothing was going to change she took a stand by refusing to pay her taxes.  Her argument was that women had no moral obligation to pay dues to a system that denied them the right of participation.  She allowed furniture and engravings to be seized equal in value to the payments she declined to submit to the state, and she repeated this act of defiance many times over, desisting only when she went abroad for a time when she was in her mid-fifties.

NEVER TO LEAVE
Charlotte died in the autumn of 1906, with John at her side.  She had been suffering from bronchitis.  She was cremated at Golders Green, on the other side of London from her home in Brixton, possibly because cremation was not yet widely available.  But her ashes were deposited more locally in Nunhead Cemetery.  Having been born in South London seventy-six years previously, she had come back, as it were, never to leave again. 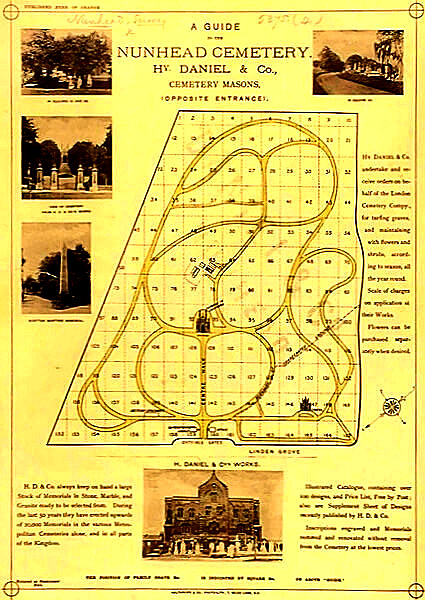 Charlotte’s brother survived her by only three years, dying in the late summer of 1909.  He was living at the same address in Brixton—Calthorpe House at 31 Gresham Road—and a nephew sat at his bedside as the sun went down on him for the last time.  As a child he had suffered from rheumatism, which led to a condition known as endocarditis, or inflammation of the inner layer of the heart.  The immediate cause of death was a debilitating bout of pneumonia.

A brief notice appeared in the Englishwoman’s Review in which John was acknowledged as a valued contributor as well as a loyal support of his sister.  He was buried with her at Nunhead.  And that is how it should be.  They had kept each other company for so many years as fellow artists, and it is fitting that they continue to do so.

Peckham Past, or, Images of Basing Manor