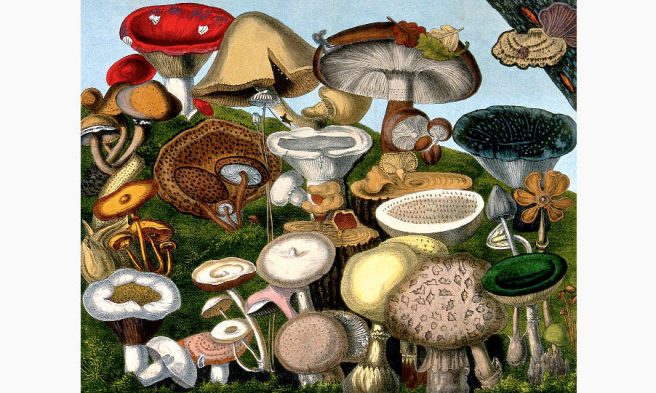 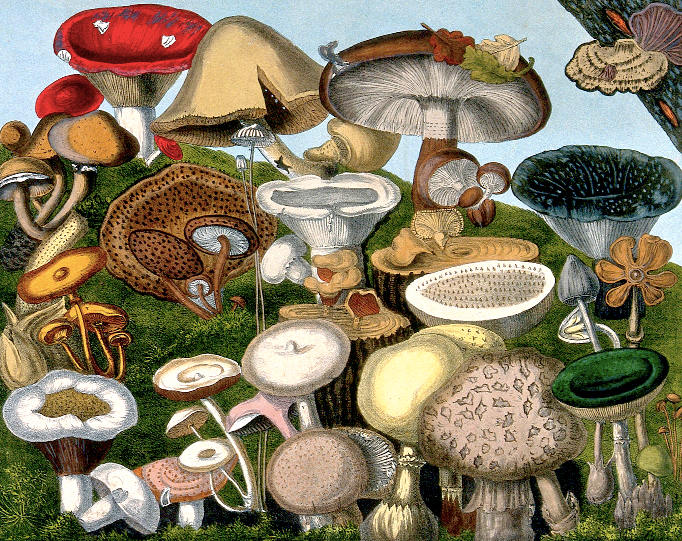 On Monday the 10th of October 1808 William Atwood headed off early to Mitcham Common to forage for mushrooms.  William worked as a wood block cutter for one of the many calico printers along the River Wandle, and he lived with his wife Elizabeth and their four young daughters just outside the village of Mitcham, which is now in the London Borough of Merton but was then in Surrey.  William was pleased with his haul, for the family were poor, and any food that could be obtained for free was a godsend.  What is more, it was lucky for him that no one had got there first, as mushrooms were eagerly sought after and sold in London markets, where they were snapped up to be made into “catsup” or “ketchup”. 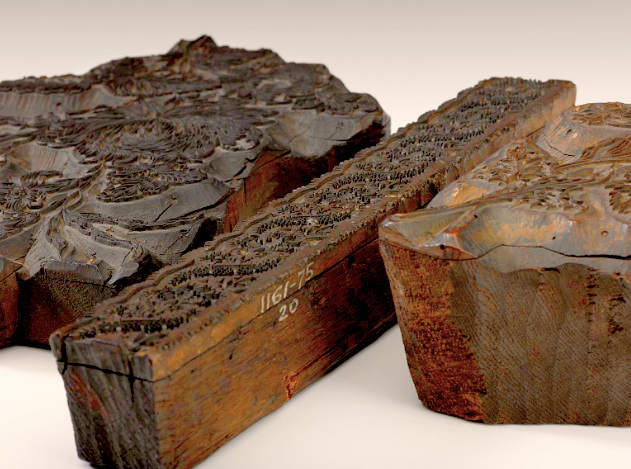 Wood blocks dating from the Georgian era with English designs for printing chintz and calico.  © Victorian and Albert Museum

When William returned home, Elizabeth cooked the fungi in a large iron pot, adding butter, water, salt and pepper.  By one o’clock the Atwoods were sitting down to a generous bowl of mushroom stew, which, it should be pointed out, was the main meal of the day.  Eleven-year-old Hannah reluctantly ate a spoonful or two but left the rest, complaining that she did not like the taste.  However, her fussiness did not spoil the good mood of the rest of the family.  Indeed, the oldest child, fourteen-year-old Mary, remarked how cheerful they all were.  “Oh, mother,” she laughed, “how funny you look!”  A report on the incident noted that the family seemed intoxicated after their meal.

Nothing else seemed out of the ordinary.  The table was cleared, and the scraps were given to the family dog, cat and hens.  By six o’clock it was getting dark, and the family took tea.  Their unexpected high spirits had dissipated, and they sank into a strange stupor that made it difficult for them to rouse themselves for the evening chores.  Before long the Atwoods had all become violently ill, experiencing excruciating headaches, and vomiting, and diarrhoea accompanied by dreadful bowel pains.  This continued throughout the night, and on Tuesday morning, much to the family’s alarm, the cat and the hens were all dead. 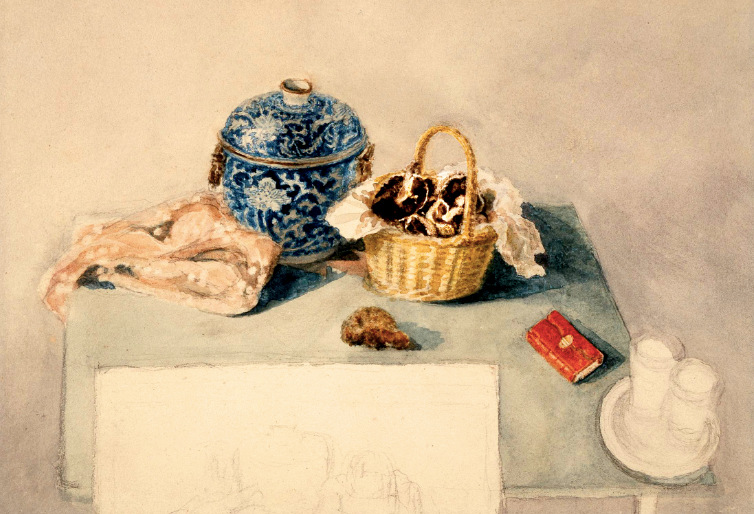 LAXATIVES AND LAUDANUM
That afternoon William called for the local surgeon, John Parrott, and, given that a visit by a doctor had to be paid for, and that the Atwoods were poor, it is clear that the situation was now desperate.  Parrott left a detailed account of events in the Medical and Physical Journal, warning that he did not have the leisure to respond to every request for information about the case.  He quickly ascertained that the family were suffering from what he described as a “vegetable poison” caused by the mushrooms they had eaten.  Although at the time there were no effective treatments for mushroom poisoning, Parrott did what he could to treat the family’s gruesome symptoms. 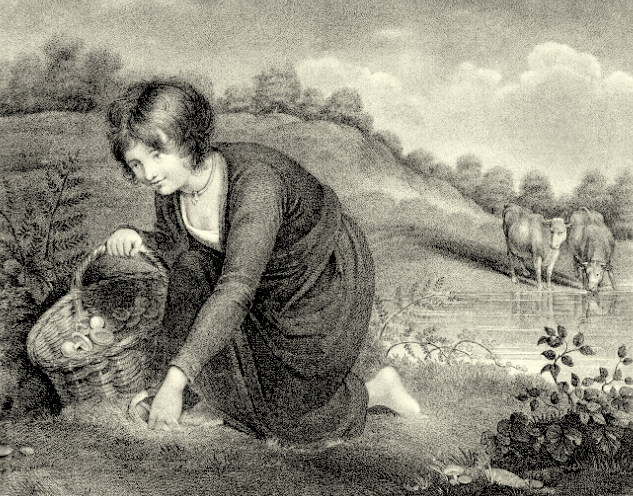 In spite of the copious vomiting and purging, the surgeon’s initial aim was to expel the poison, to which end he administered “oily opening medicines”, a type of unpleasant laxative delivered by “emollient glysters” or soft suppositories.  But in due course he adopted the opposite approach, and prescribed small doses of laudanum to quell the diarrhoea, which proved inefficacious.  Then he tried to stop the vomiting by means of “effervescent draughts”.  The draughts, for all their effervescence, only increased the pain in the patients’ bowels.

The dog is unlikely to have received any treatment: he died in agony on the Wednesday.  But Mary seemed to be making some progress, and felt well enough to walk the quarter of a mile into Mitcham village.  Unfortunately she suffered a relapse on her return.

Very early on Friday morning Mrs Atwood, who was in the early stages of pregnancy, miscarried.  But her unhappiness did not end there, for at two in the afternoon Mary died, having previously appeared to be on the road to recovery.  Only thirty minutes later seven-year-old Eliza also expired.  And then, while the parents were beginning to recover, along with Hannah, who had rejected the stew, five-year-old Sarah collapsed.  She suffered terrible convulsions, which persisted until her death at half-past four on Saturday morning. 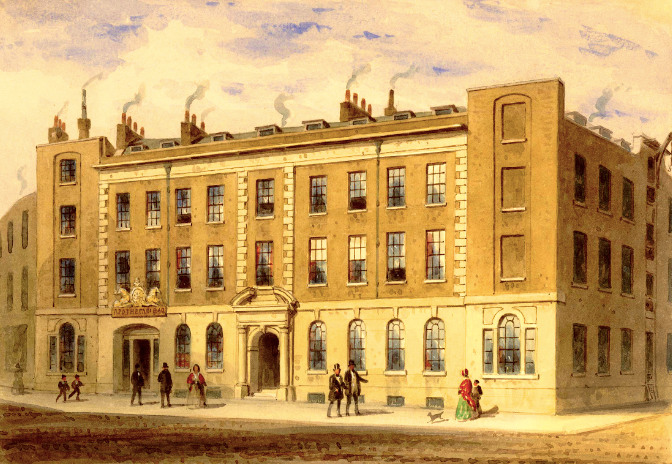 View of Water Lane in Blackfriars with the entrance to Apothecaries Hall on the left.  Watercolour by Thomas Hosmer Shepherd dated 1855.  © British Museum

MIXING THEIR MUSHROOMS
On Monday the 17th of October an inquest was initiated by Charles Jemmett, the Surrey coroner, but then adjourned.  To assist with the investigation permission was sought and granted to conduct an autopsy on one of the unfortunate victims, who turned out to be poor Sarah.  Little evidence was found in the body, and John Parrott posited that the poison had very quickly acted on the brain and nerves.  Consequently an expert in the person of Thomas Wheeler, the Botanic Professor of the Apothecaries’ Company, and apothecary at St Bartholomew’s Hospital, promptly came down to Mitcham, bringing with him some sample mushrooms gathered on Mitcham Common to show the Atwoods. 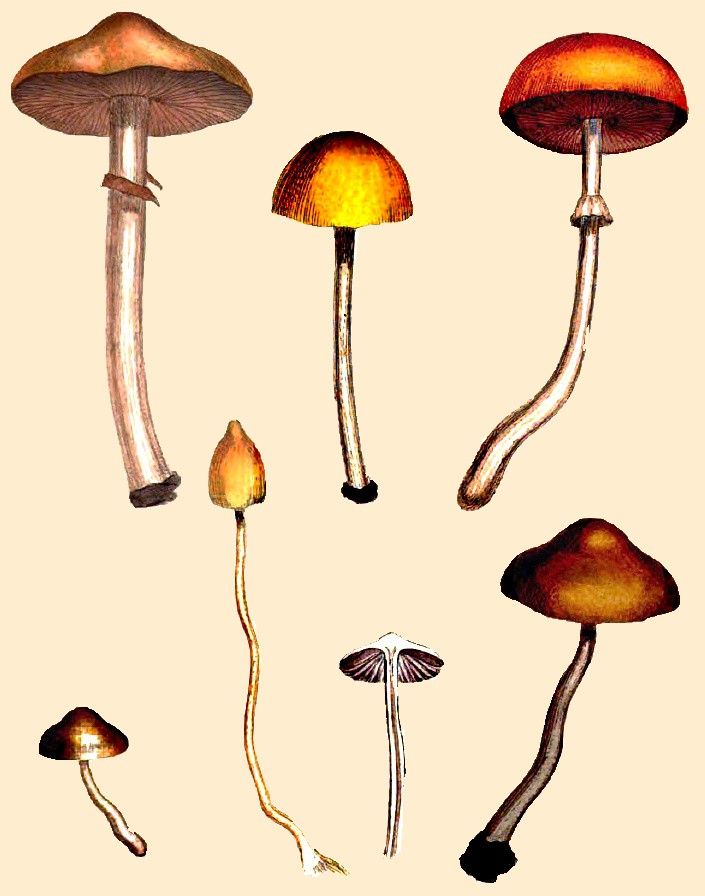 Varieties of the poisonous agaric.  Image in James Sowerby, jun., The Mushroom and Champignon illustrated, compared with, and distinguished from the poisonous fungi that resemble them (1832) plate 5.

What Wheeler had found was believed to be the Agaricus semiglobatus, which has now been renamed Protostropharia semiglobata, and is also known as the dung roundhead in honour of its preferred growing medium.  Unfortunately it resembles the champignons that William Atwood had meant to collect, and it is perfectly possible that the family ate harmful as well as harmless mushrooms, which would explain their “intoxication” and hilarity.  One of the Atwood children described eating mushrooms that looked like umbrellas with a knob on the top, which might have been the psychoactive liberty cap.  An earlier case involving hallucinogenic fungi was reported in 1799 by a Dr Everard Brande, and is likely to have been the result of an unfortunate man inadvertently eating magic mushrooms collected in Green Park.

AN AWFUL CAUTION
On Tuesday the 18th of October—the day after the inquest—the three girls were buried in the churchyard of St Peter and St Paul in Mitcham.  A Mr Moore—possibly of the Potter and Moore company—proposed that a subscription should be set up to support the family.  The money raised probably also paid for the headstone, which can still be seen today, and which memorialised the tragedy with the following rather admonitory inscription: 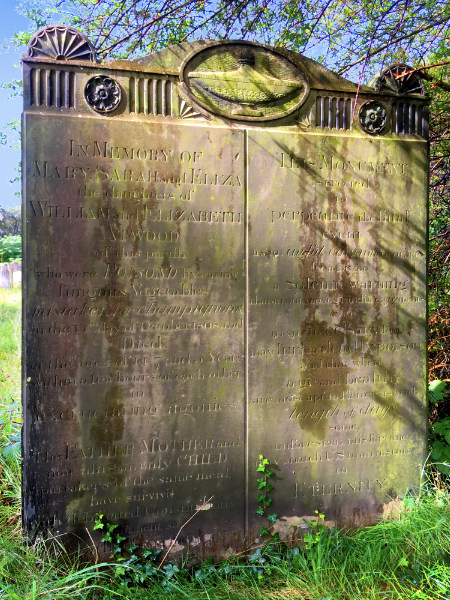 The grave of Mary, Sarah and Eliza Atwood in the churchyard of St Peter and St Paul in Mitcham.  © Karen Ellis-Rees 2021

IN MEMORY OF MARY, SARAH and ELIZA the daughters of WILLIAM and ELIZABETH ATWOOD of this parish who were POISOND (sic) by eating fungous Vegetables mistaken for champignons on the 11th day of October 1808 and Died at the ages of 14, 7 and 5 Years within a few hours of each other in excruciating agonies.  The FATHER, MOTHER and now alas an only CHILD partakers of the same meal have survived with debilitated Constitutions to lament so dreadful a calamity.  THIS MONUMENT is erected to perpetuate the fatal event as an awful caution to others.  Let it be too a Solemn warning that in our most grateful enjoyments even in our necessary food may lurk a deadly poison and then when age and health are most apt to flatter us with length of days some unforeseen misfortune may snatch US in an instant to ETERNITY.

THE PRICE OF SURVIVAL
I cannot imagine that these words provided much comfort to the surviving Atwoods, least of all to William, who had been responsible for collecting the mushrooms.  If the family had owned a copy of Dr Buchan’s Domestic Medicine; or a Treatise on the Prevention and Cure of Diseases—published in twenty-eight parts at sixpence a part—the poor fellow might have seen the plate illustrating edible and poisonous mushrooms, and averted disaster.  But it is highly unlikely that someone who relied on foraging free food in the wild would have spent the equivalent of three days wages on such a publication—even if they could read. 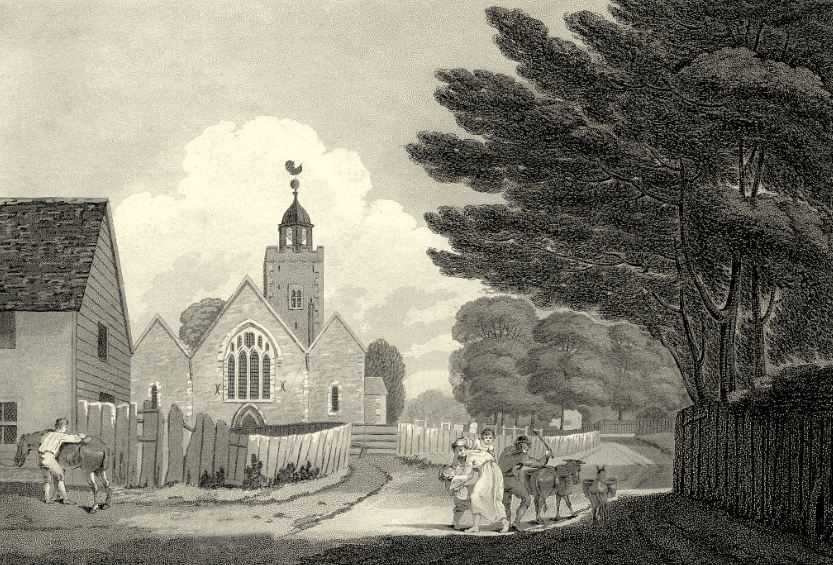 View of the church of St Peter and St Paul in Mitcham.  Aquatic by William Ellis dated 1791.  © British Museum

A further foray into the churchyard will be called for, as the Atwoods who survived the 1808 tragedy have proved elusive.  Theirs is not a particularly common name in Mitcham parish records, although a slew of infant Atwood deaths was recorded from 1795 until 1812, seemingly those of William’s and Elizabeth’s children.  An Elizabeth Atwood, who died aged 60 in 1830 and is buried in the churchyard, could be our Elizabeth.  A William Atwood appears in Mitcham rent records paying increasing amounts of rent from the 1800s to significant amounts for a house and land in the 1810s.  And a physic gardener and farmer who was declared bankrupt in 1827 was also called William Atwood.  Could it be the case that the subscription organised by Mr Moore was enough to set our William up, or are we dealing with a different man?  Hannah Atwood has also been hard to trace.  Maybe she was the servant working at the Nine Elms watermill in 1815 who was cheated out of a £1 note.  And then again, maybe not.

The Strange Story of Walter Stephen Thompson: Part One