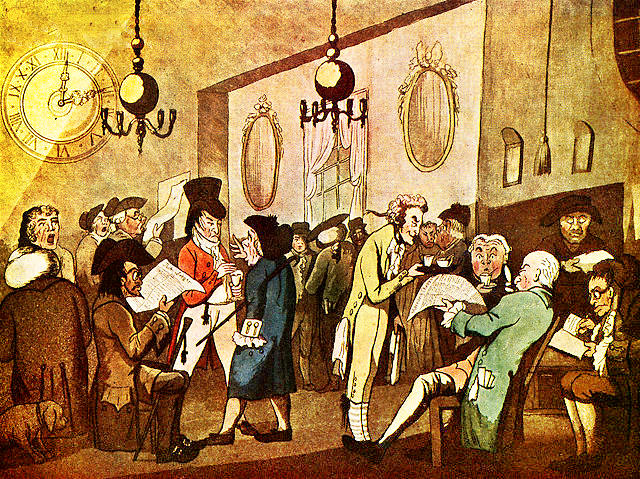 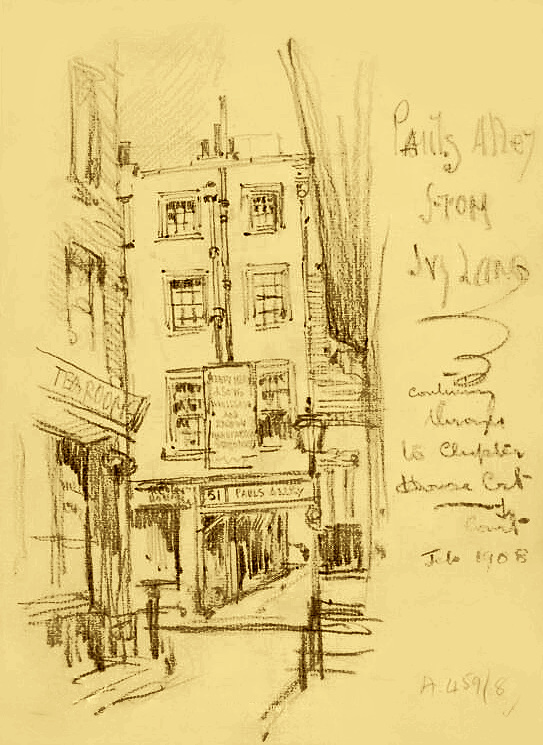 This is the story of a strange incident involving a coffee house that operated in the London of George the Third.  The story has two principal characters—not including the coffee house!—and the fact of the matter is that neither is known to us by name.  Well, one is known by his initials, but even they are a matter of dispute.

So there is not much to go on.  What is more, the source of the story is a single paragraph, and not a very long one, which was published in the newspapers in the year 1762.  But it is a very human story, and your reward for persevering with it will be the growing realisation that not all in it is necessarily what it appears to be at first glance!

A SOLEMN SILENCE
Coffee houses were an important feature of the social and intellectual life of eighteenth-century London.  As well as making available the stimulus of caffeine, they provided comfortable surroundings in which to pursue the pleasures of the mind.  Here business deals were struck.  Sales and auctions were advertised on notice boards.  Pamphlets and newsletters were distributed, and topical issues discussed and debated. 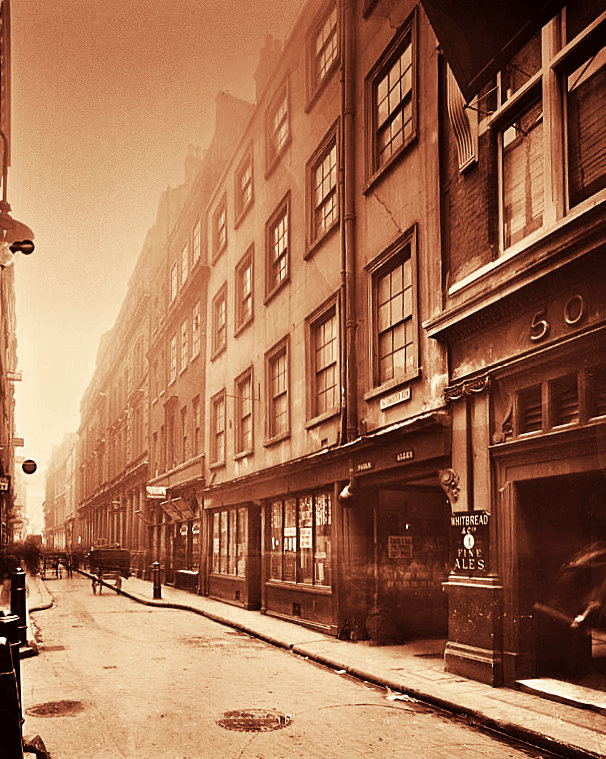 The coffee house in question was the Chapter, and it stood a short distance from St Paul’s Cathedral in a narrow alley running north from the churchyard up into Paternoster Row.  The name was acquired by virtue of its proximity to the Chapter House, the administrative hub of the cathedral.  Anne and Charlotte Brontë once stayed there, enjoying the view of the cathedral, and the sound of its bells.  Mrs Gaskell in her 1857 biography of the sisters described the alley with its dreary stationers’ shops.  Both ends had been blocked off to carriages to preserve the “solemn silence” of the precinct, which it did so successfully that, although the noise of the city was all around “like the sound of an unseen ocean”, yet the footsteps of the passers-by could be heard quite distinctly.  The coffee house itself had a look of the seventeenth century, for

the ceilings of the small rooms were low, and had heavy beams running across them; the walls were wainscoted breast-high; the staircase was shallow, broad, and dark, taking up much space in the centre of the house.

The windows were high and narrow, and those at the front of the building, which looked out over Paternoster Row, afforded a view of a gloomy street of grim and shadowy dwellings. 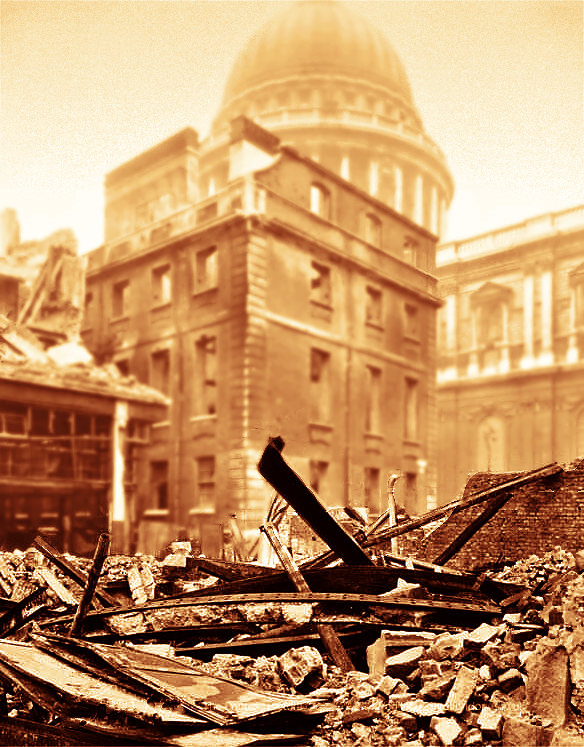 This may well be how it all ended.  Photograph of wartime bomb damage around St Paul’s Cathedral dated 1941.  © London Picture Archive

The more prominent coffee houses attracted individual crowds—marine insurers at Lloyd’s, doctors at Batson’s, scientists at the Grecian—and the Chapter was no exception.  Mrs Gaskell described its eighteenth-century clientele as a mix of literary hacks, critics and wits, which may explain its generous provision of reading material.  “All the London and Country newspapers,” declared an 1802 guide to the capital, “as also Magazines and Reviews are taken in.”  The more voracious readers, who pounced on the newspapers the moment they were brought in, and read them before the ink had dried, were known as the Wet Paper Club.

But in the autumn of 1853, on the death of Charles Faithfull, the proprietor, the coffee house was knocked down.  In its place The Chapter Wine House—a tavern—was built.  The residents were only ever men—Mrs Gaskell thought that the only woman in the establishment was one of the servants—and they were mainly there to discuss what was going in the world of letters.  Booksellers held meetings in the upstairs room, which was long and low and dingy, and which in later years, and certainly after the time of Mrs Gaskell, was used by a local drapery establishment.

A LONG WAIT
And it was in the Chapter Coffee House—which has now disappeared without trace—that a young man with an interesting story might have been seen from time to time in the winter of 1762.  Alas, we do not know his name.  We only know his initials, and these are either “I. E.” or “T. E.”, depending on which newspaper of the time you refer to. 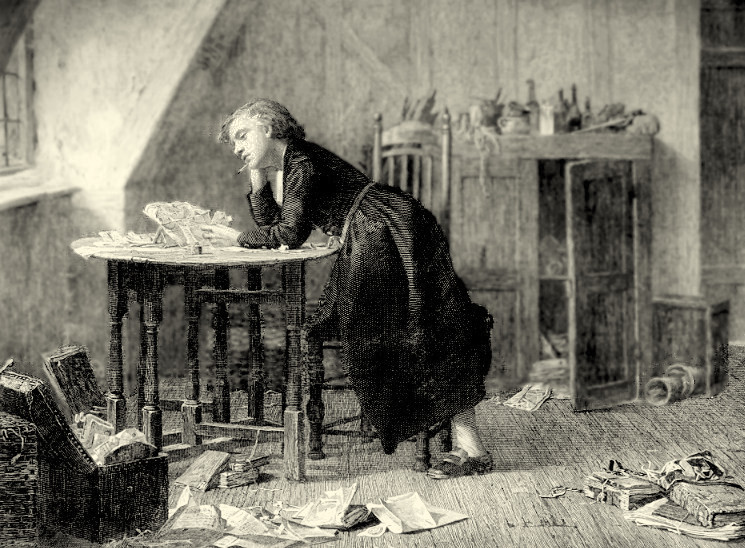 And newspapers are really the point, because our young man had placed an advertisement in which he announced himself as “I. E.”, or “T. E.”, and in which he gave the Chapter as his postal address.  Morning after morning in that chilly February he sat in the snug warmth of the coffee house, listening to the literary chit-chat, and waiting for a letter to arrive.

And, as he waited, he might have seen some interesting characters.  Samuel Johnson, a regular patron of the Chapter, was working on his edition of Shakespeare, which would not see the light of day for another three years.  Oliver Goldsmith, who always sat in the same seat, was penning his memoir of Richard “Beau” Nash, who had died in 1761.  Another habitué of the coffee house was Thomas Chatterton.  At the time of our story the nine-year-old was still a schoolboy in Bristol.  But in the weeks before his death in 1770 he was living in London. “I am quite familiar at the Chapter Coffee-house,” he wrote to his mother, “and know all the geniuses there.” 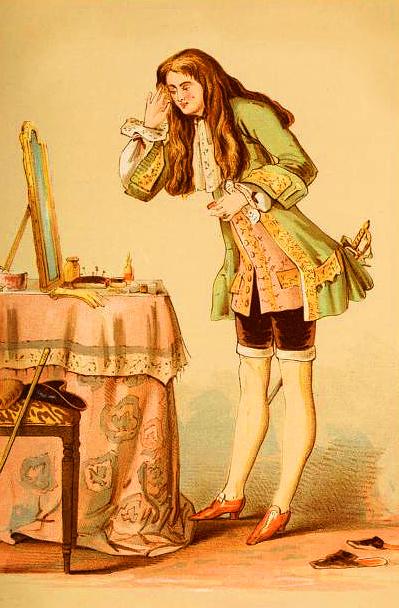 A VILLAGE NEAR BATH
But before we turn to the advertisement itself, a word or two about the early life of its young author, who, to keep matters simple, will be “I.E.” from this point on.  At the time of the story—and you will find out in due course how we know this—“I.E.” was about twenty-two years old.  He had been born in 1740, with some Irish blood in his veins, in a village near Bath.

Bath in the 1740s was not yet the showpiece of Georgian architecture that it would later become, and if “I.E.” spent any time in his formative years in the city his memories of it would have been pretty unremarkable.  But he might have caught a glimpse of Beau Nash, who has already been mentioned in connection with Goldsmith, and he certainly would have been aware of Nash’s reputation as Master of Ceremonies at Bath and dandy extraordinaire.

Well, whether “I.E.” ever went into Bath or not, this much is clear.  He grew up, in the village where he had been born, not with his mother and father but with one of the villagers.  He had not even the slightest knowledge of his father.  However, he learnt a certain amount about his mother, namely that she came from Ireland, and that she had lived in the village for a time.  She also had money, some of which she handed over to her child’s carer to pay for his upkeep.  And having paid for his upkeep, she left, promising that she would return one day, when he was older.  But she never did return.

AN OPEN WINDOW
Twenty-two years later “I.E.” was still thinking about his mother.  By now he had come up to London—it is anybody’s guess what he was doing there—and had installed himself in the Chapter Coffee House.  And, as he watched his fellow patrons reading the notices pinned up on the board, an idea came to him.  His idea was, quite simply, to put an advertisement in a newspaper.  In that advertisement he gave a brief account of his early life—his Irish mother, the village near Bath, his abandonment—before explaining that his purpose was

to desire the lady, if living, and this should be so fortunate as to be seen by her, to send a letter, directed to I.E. to be left at the Chapter coffee-house, St Paul’s church-yard, London; wherein she is desired to give an account of herself, and her reasons for concealing this affair.

Assuming that his mother had returned to her native land, he sent the advertisement to Faulkner’s Dublin Journal.  But he was clearly prepared for the worst, for he had added that

if the lady should be dead, and any person is privy to the affair, they are likewise desired to direct as above. 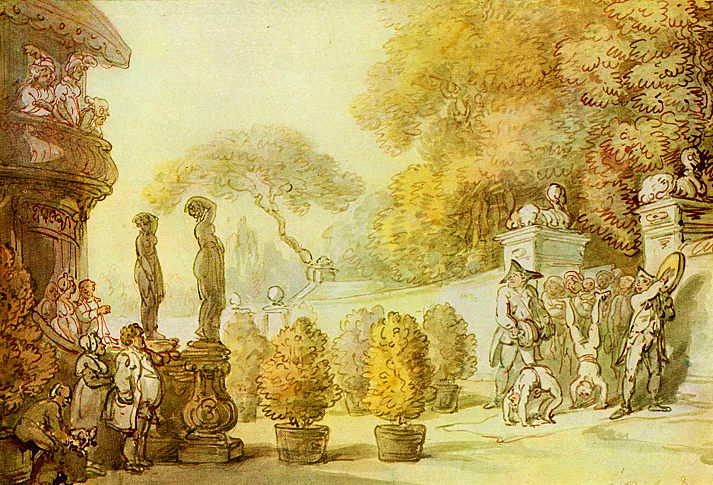 The entrance to Vauxhall Gardens.  Watercolour by Thomas Rowlandson.

The remarkable fact is that newspapers frequently opened a window on life’s sadnesses.  In 1776 a gentleman of considerable means, who was turning sixty but had no children, submitted a request in the Public Advertiser for a wife—any wife—“any Widow or single Lady”—provided that she was at least five months pregnant.  A chance encounter—in the street, in the theatre, anywhere—might compel those inhibited by good manners or a modest disposition to air their feelings in print.  In 1758 a young man who had caught sight of a young woman in Vauxhall Gardens—“in company with two Gentlemen”—reached out to her in the pages of the London Chronicle.  He asked that her response be sent to “A.D.” at the Temple Exchange Coffee House—all eighteenth-century life seems to have been lived in coffee houses—and he assured her of his honourable intentions.  Then in a moment of touching openness he

begs she will pardon the method he has taken to let her know the situation of his Mind, as, being a Stranger, he despaired of doing it any other way, or even of seeing her more. 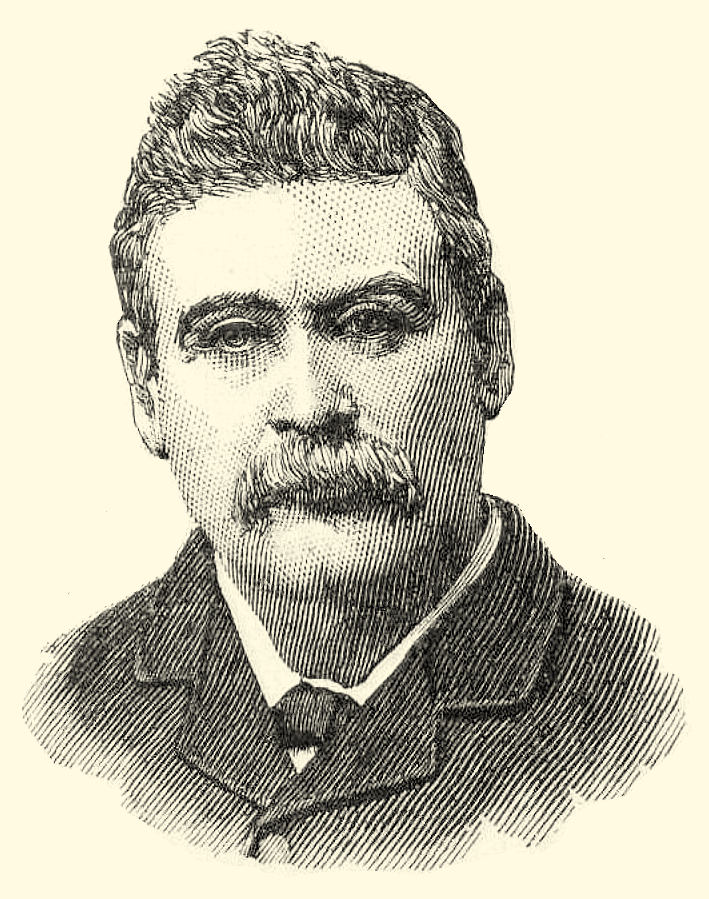 Henry Sampson.  Image in The Illustrated London News 23 May 1891.

A MATTER OF DEBATE
Henry Sampson, a nineteenth-century newspaper proprietor, and author of a history of advertising, makes an interesting observation about the young man at Vauxhall Gardens.  Sampson points out that the young woman was not alone—there were two men with her—and that her silent admirer had no way of knowing what connection she had with her companions.  To approach her in the way he did, Sampson argues, was thoroughly underhand.  His claim to have only honourable intentions suddenly seems hollow.

Well, maybe Sampson is judging the young paramour rather harshly.  I’ll let you decide!   However, we may now catch ourselves having second thoughts about “I.E.”.  Was he too being insincere?  Possibly he invented the story of his abandonment in the hope of financial gain, playing on the sympathies of a woman of substance with a kind heart, and a soft spot for foundlings, who might be prepared to “remember” her Irish roots, and an infant son, and a village near Bath.  Now that would be an interesting debate for the regulars at the Chapter or any other coffee house.