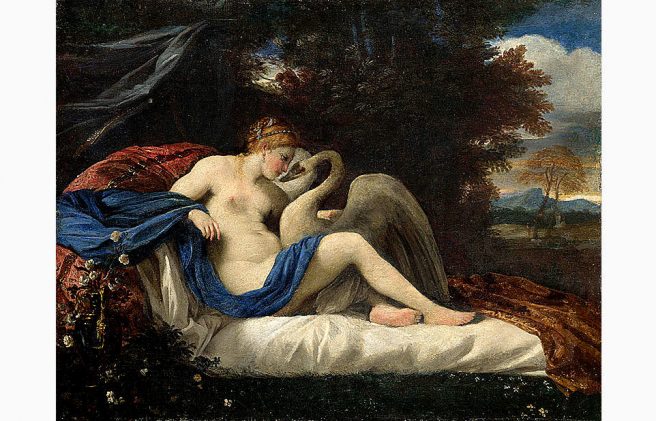 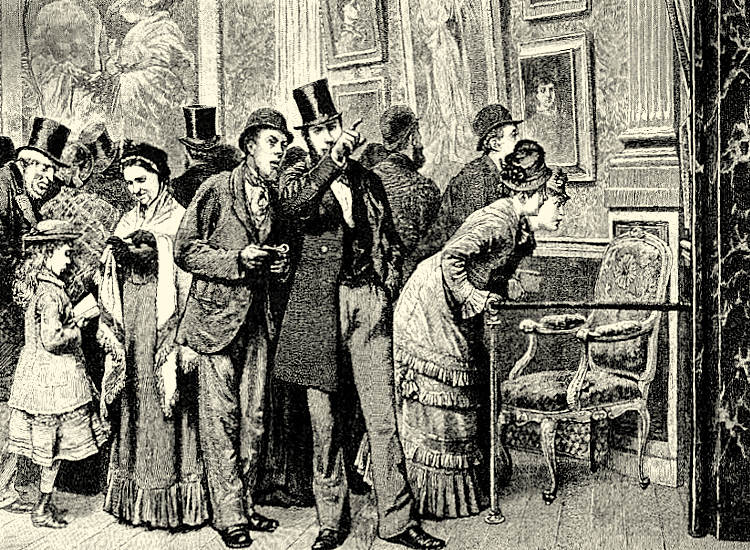 Visitors admiring the paintings in the National Gallery.  Image in The Graphic 3 June 1871.

On Tuesday the 23rd of January 1844 Mr Edward Grant—a belt, braces and breeches maker of 23 Piccadilly—was enjoying an afternoon of art appreciation in the Great Room of London’s National Gallery.  Although some might have criticised the appearance of the building designed by William Wilkins, Grant enjoyed the privilege of free admission to see great art, as did many Londoners.  In fact earlier in the month two hundred boys from the Marylebone workhouse had come on an outing to see the paintings.

At about three o’clock the gallery was quiet: there were only three or four visitors.  All the same, Grant was aware of one of their number.  He was a young man, and he was disabled.  Whereas Grant had been relieved of his umbrella at the entrance to the building, this poor young chap had been allowed to keep his crutches.  But what made him noticeable was not so much the crutches as he way he was staring at a certain painting with obvious fascination.  He had been standing in front of it for over forty-five minutes, and Grant, somewhat wryly, thought that he knew why. 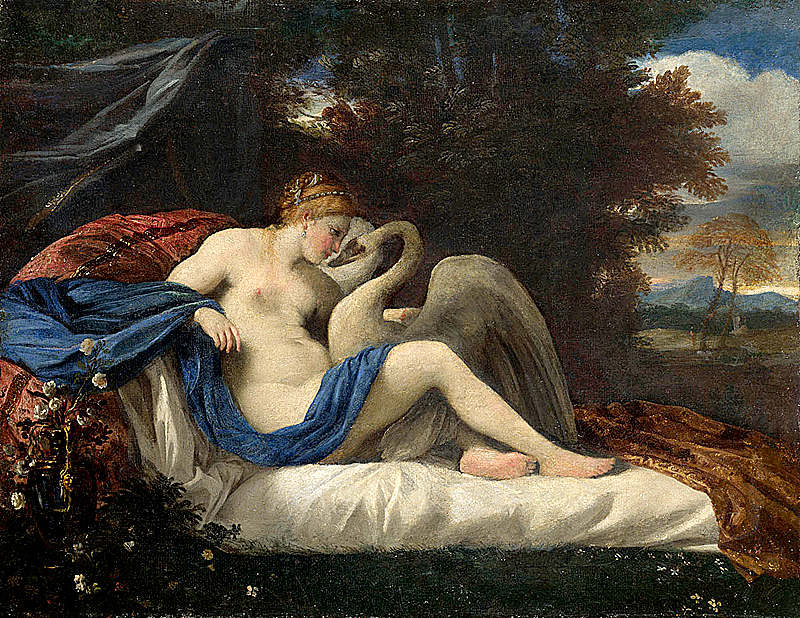 The painting was not very large—fifty centimetres wide, thirty-seven centimetres high—which might explain why the man was standing as close to the guard rail as possible.  Perhaps he liked the works of Pier Francesco Mola, the reputed artist.  Perhaps he was an aficionado of baroque painting, or a student of classical mythology.

THE HORROR OF IT
At the time the painting had the title Jupiter and Leda, but now it is called Leda and the Swan.  Leda, wife of King Tyndareus of Sparta, is depicted as a voluptuous creamy-skinned young woman, who is being seduced by the King of the Gods in the form of a beady-eyed swan.  Her soft belly, fashionably small breasts and bare legs were no doubt painted for the private enjoyment of the picture’s owner—it is unlikely that the painting would have been on show in a patron’s public rooms.

While one or two of the visitors might simply have smirked at the man’s fixation with the beautiful Leda, the others might have been more concerned at seeing a woman in a state of undress in a public setting.  In the first place, the workhouse boys could ogle her nakedness.  Then again, members of the gentler sex might be corrupted.  (Never mind that members of the gentler sex just might have seen their own unclothed bodies.) 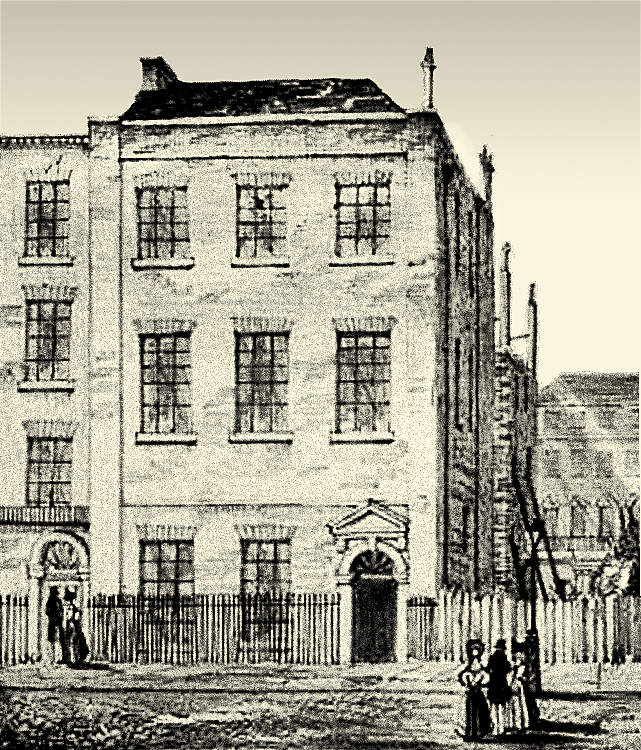 Whatever their views on the display of female flesh, the visitors must have shared a frisson of horror when the man lifted his crutch and furiously thrust its end into the painting, doing terrible damage.  Almost immediately the violent art connoisseur was apprehended by Francis Morris, the gallery attendant who was on duty at the time.  He was then taken to Marlborough Street Police Court.

FOR THE NATION
Throughout the preceding century pressure had been put on the British government to form a national art collection.  France had one: so should we.  But it was not until 1824 that the first National Gallery opened at 100 Pall Mall, its collection consisting of thirty-eight paintings bought for sixty thousand pounds from the estate of John Julius Angerstein, a wealthy banker.

The initial site was Angerstein’s former townhouse, but problems with subsidence suggested that it was unsuitable as a venue, and the collection was temporarily moved to 105 Pall Mall while a purpose-built gallery was constructed.  The new National Gallery was squeezed on to a curiously narrow strip of land, which had once been the site of the King’s Mews, with a workhouse and army barracks to the north.  It would be some years before Trafalgar Square was laid out to show the building to greater advantage. 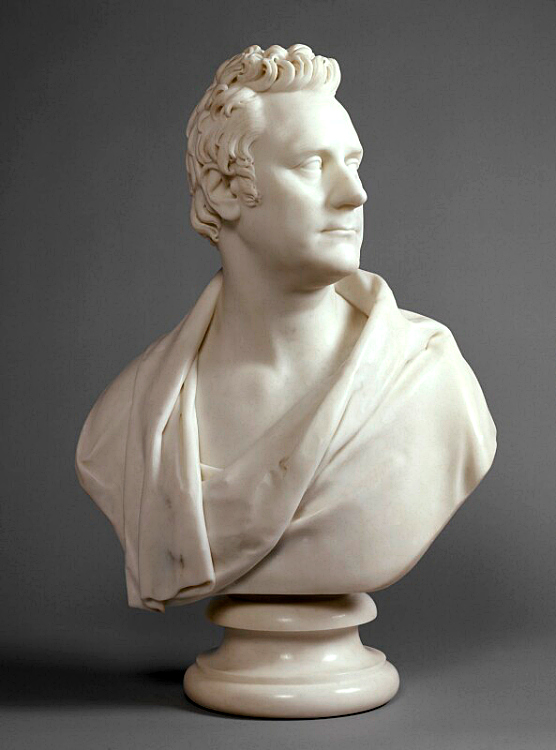 One of the people involved in the negotiations to acquire Angerstein’s paintings for the nation was Charles Long, the eventual donor of Leda and the Swan.  Long was the fourth surviving son of a West Indies merchant, and, although there appears to be no evidence that he personally owned enslaved people, their exploitation would have contributed to his inherited wealth.  In 1786 at the age of twenty-six Long went on an educational grand tour of Europe—the eighteenth-century equivalent of the gap year—as did many wealthy young men of the time.  On his return he became a member of parliament, rising in the government to become Paymaster General.  Even so his real enthusiasm seems to have been art: he was a Fellow of both the Royal Society and the Royal Society of Arts, he negotiated the purchase of Angerstein’s collection, and he was even consulted by the royal family on matters relating to the purchase of art.  When he retired from politics in 1826 he was rewarded with the title of Baron Farnborough of Bromley.

Long had married Amelia Hume, the daughter of a fellow connoisseur, and lived with her at Bromley Hill Place in Kent.  There she designed a famous garden, and was herself an artist of some ability.  She died in 1837, and it was said that Long never recovered from his grief, expiring himself only a year later.  Having no children, he left some of his collection of paintings to the British Museum, and in time they came to the newly opened National Gallery.  His bequest included Leda and the Swan, which was then said to be the work of the Baroque Italian artist Pier Francesco Mola.  It has now been reattributed as a painting not by Mola but in his style.

The new National Gallery, viewed from Trafalgar Square.  Image by Thomas Hosmer Shepherd in Jones’s Series of Engraving from the Pictures in the National Gallery (c.1830) title page.

MY NAME IS WILLIAM ADAMS
Back to the art vandal.  When he appeared in court the young man said that he was William Adams.  He had once been in the bacon line—thus the newspapers, and more of this later—but was now a watchmaker.  Although he resided in Paradise Street in Westminster his life was not good.  Work was scarce, and he was tormented by the pain of a diseased leg, which was why he used crutches.

On the day of the incident witnessed by Edward Grant—the gentleman, you will remember, who had his business in Piccadilly—Adams had been in so much pain that he had resolved to see Mr John Painter Vincent, surgeon at St Bartholomew’s Hospital, and to enquire about having his leg amputated in the hope of gaining some relief. Amputations in the first half of the nineteenth century carried with them at least a twenty-five percent chance of death, either from trauma or from blood poisoning that set in as a result of the operation.  It would be some two years before the first use of an anaesthetic—ether—in England.  That Adams was considering such a drastic measure gives a clear indication of the pain he was suffering.  He described how he wandered around for hours while considering his options, and finally entered the gallery for succour. 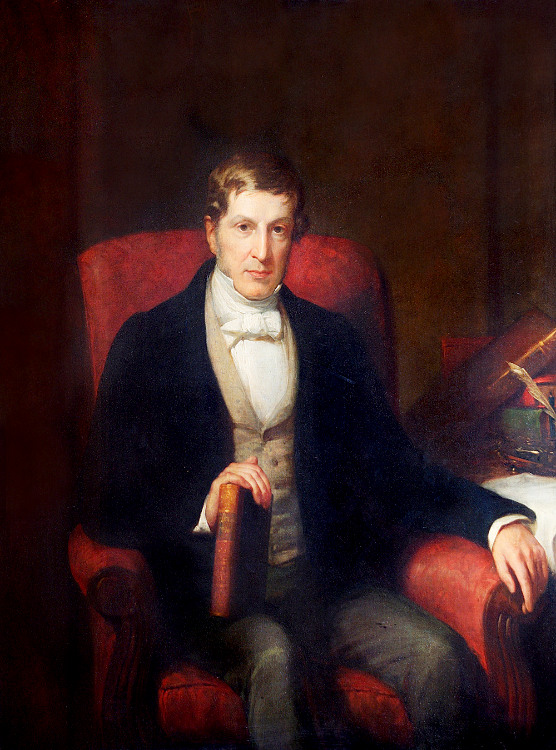 I CANNOT EXPLAIN IT
When he was asked why he had damaged such a valuable painting—it was said to be worth about a hundred and fifty pounds—Adams said that he had no idea.  Given that he did not use what might appear an obvious defence, namely that he regarded the picture as indecent, one might hazard a guess that the sight of Leda’s plump and perfect leg combined with his suffering to drive him to a temporary pain-filled rage or insanity.  Another possibility is that, after staring at the seductive nude for three-quarters of an hour, Adams feared that he might never get to see a real naked woman.  Whatever the reason—if Adams really knew it himself—he was not letting on.

There was some legal discussion about whether this case could even be tried in the magistrates’ court.  Cases involving goods worth more than fifteen pounds had to be sent to a higher court, where sentences might be more severe.  After much discussion, involving a consultation with the Prime Minister, Sir Robert Peel, it was resolved to value the painting at five pounds—it was considered almost valueless and beyond repair.  Adams said that he was sorry, but he was duly fined five pounds for his vandalism.  He was warned that if he was unable to pay he would have to spend two months in prison.

LOOKING FOR WILLIAM ADAMS
Hunting for reliable signs of William Adams in official records has been unsatisfactory.  My best guess is that he was the Samuel William Adams who at the time of the 1841 census was living at 15 Paradise Row in Palmer’s Village in Westminster.  The address ties in with the newspaper reports, as does the fact that Samuel William worked as a watchmaker.  Furthermore his father, who he lived with, was a baker, and it is quite possible that newspapers incorrectly reported him as saying that he had been brought up “in the bacon line” when really what he said was “in the baking line”

Pleasing Decay, or, Another Look at the Art of Algernon Newton

The Quality of Light, or, The Art of Karl Heffner

Anonymous Letters from an Artist’s Model