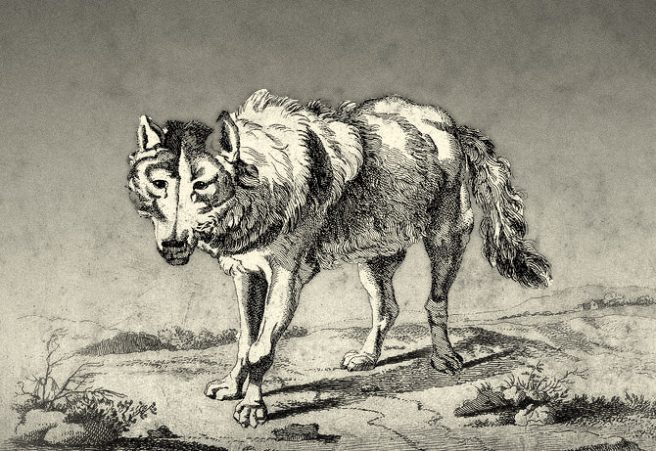 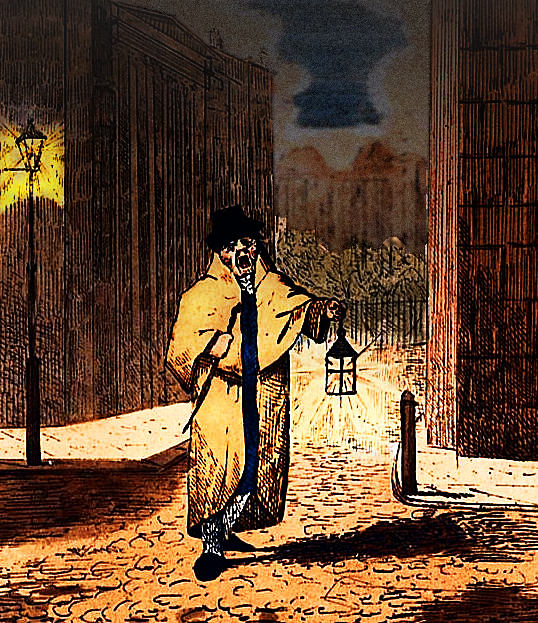 The morning herald, or, a night watchman with cudgel and lantern, by James Henry Lynch.  Etching dated 1826.  © London Picture Archive

The morning of the 2nd of March in the year 1820—a Thursday just weeks into the reign of George IV—was a stormy one in London.  Between five and six o’clock in the morning the wind began to blow with great violence from the north west.  As darkness lifted the wind grew stronger, until it was gusting enough to inflict damage on humans and on their habitations.  And it gusted without letting up for a further two to three hours.

The newspapers gave dramatic accounts of the storm.  A journalist residing in Clerkenwell wrote that every room of his house

was sensibly agitated, as with a slight shock of an earthquake.  One gust, in particular, was truly terrific, and could scarcely be surpassed for the moment, by any tropical tornado.  We tremble to anticipate the effects of this hurricane.

The streets of the metropolis bore ample witness to the destruction.  Bricks and tiles blown from the roofs of houses lay everywhere, and it was reported that an entire stack of chimneys had been sent tumbling to the pavement that ran along the south side of Lincoln’s Inn Fields.  Several trees in St James’s Park were uprooted.  On the river vessels were torn from their moorings and drifted down with the tide.  At Deptford and Woolwich ships floating free in this way got foul of each other—it was too dangerous for men to try to board them from boats—and they were badly damaged.  A boy who had been working on a corn barge was reported missing, and was presumed to have drowned in the atrocious conditions.

One man who had a particularly lucky escape—and he was certainly luckier than the poor young bargee—was a night watchman—a “Charley”—stationed in Petticoat Lane in Spitalfields.  Lying between Bishopsgate and Aldgate, this was a rough part of town, described by one writer as a “wretched neighbourhood” of dismal cellars and courts and alleys.  Doubtless our watchman had his work cut out at all times, but in the tempestuous early hours of the 2nd of March the biggest danger he faced was not the footpad or the ruffian but the chimney-pot that fell on his head.  And it would certainly have been the worse for him had he not been well-hatted, the thickness of his hat protecting him, miraculously, from serious injury. 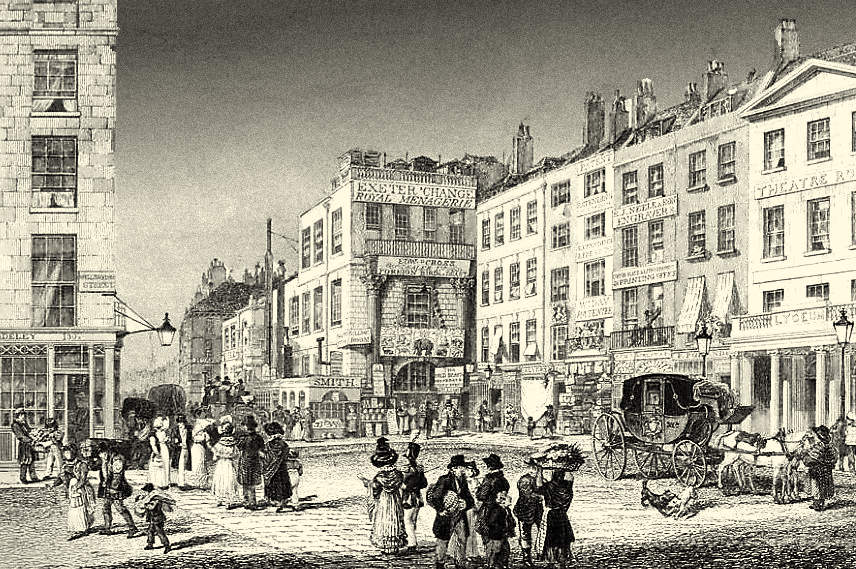 He also did well to be keeping watch in Petticoat Lane and not in the Strand.  For at some point in the course of that memorably blustery morning a wolf appeared outside a window of Exeter Change, a ramshackle building that at street level was an arcade of shops but higher up a menagerie of wild and dangerous animals.  The wolf was, I suppose, a Londoner of sorts, and, until I came across a brief paragraph in a contemporary newspaper, a forgotten Londoner at that.  Here, then, is its story. 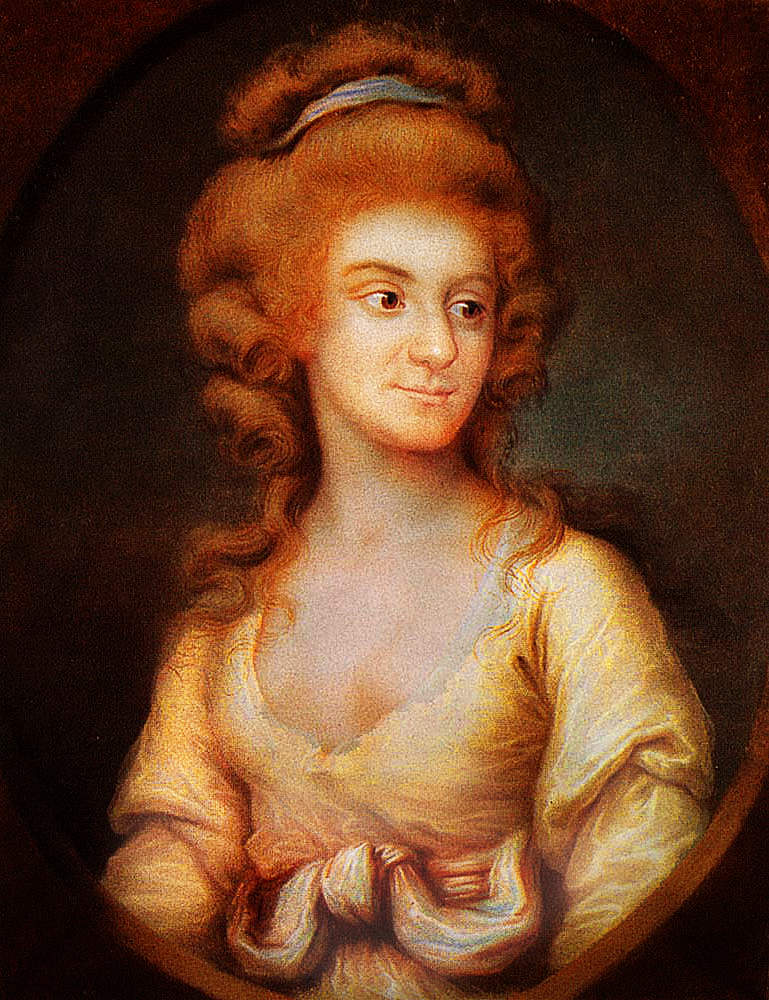 Portrait of the Duchess of York by Joseph Friedrich August Darbes.  Date unknown.

EXIT THE WOLF
The wolf in question had come to London from Oatlands Park in Surrey, the residence of Frederica Charlotte, Duchess of York.  The Duchess was, well, eccentric.  For one thing, she hardly slept, and would go out for walks in the small hours.  She had a large menagerie in the flower-garden at Oatlands, filled with eagles and macaws.  Monkeys played on the lawn—she was very devoted to her monkeys—and she would watch them from the window of her boudoir.  Kangaroos hopped, and ostriches strutted, in the paddock.

More than any other animal, the Duchess loved dogs.  A guest at Oatlands counted between twenty and thirty, and he remembered his annoyance at being woken by them as they tore along the gallery outside to his bedroom, with Dawe the footman calling them to their morning meal.  If ever one died it was buried in the park, its final resting place marked by a gravestone bearing an epitaph. 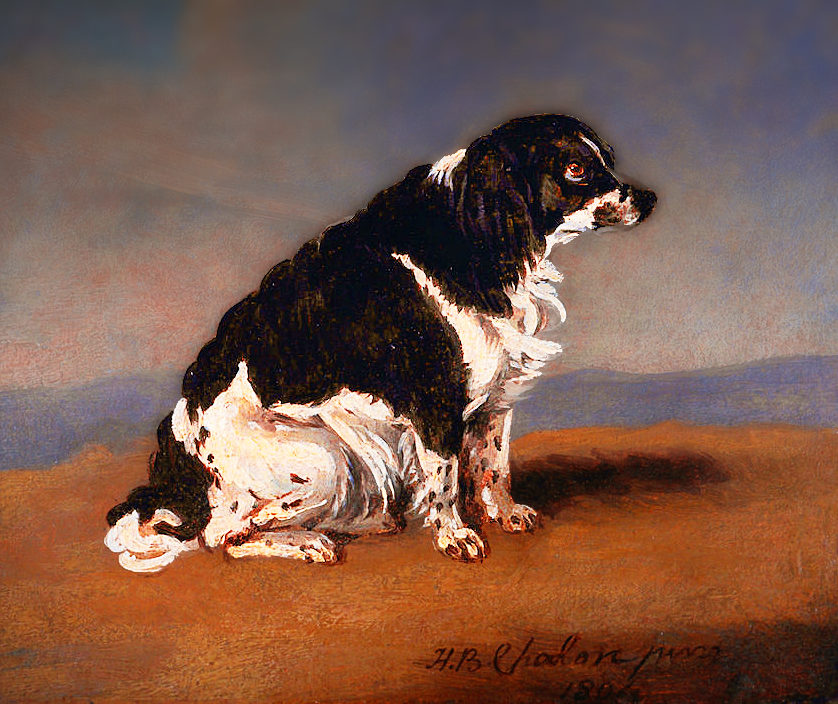 A spaniel belonging to Frederica Charlotte, the Duchess of York.  Painted in 1904 by Henry Bernard Chalon.

Given Frederica’s passionate attachments to dogs, it perhaps makes sense that she had once been the owner of the wolf.  Why and when she sent it to Exeter Change is a mystery.  But the proprietor of the menagerie, Edward Cross, is known to have had many distinguished clients, including several crowned heads of Europe.

Cross was also, by necessity, a veterinarian.  Some years after the events described here he would be entrusted with five royal cygnets that had been hatched on the river in St James’s Park: he scissored and cauterized their pinion joints, and dispatched three to the grounds of Buckingham Palace and two to Virginia Water.  Indeed, at the time of the great storm of 1820, the Duchess of York’s wolf had been undergoing treatment for an unspecified illness.  But by the time our story began, on the Thursday morning, it had escaped. 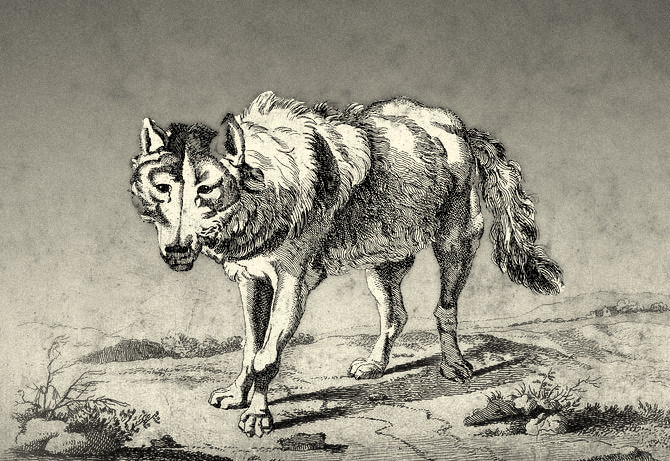 A wolf on the prowl.  Etching dated 1659.”  Credit: Wellcome Collection  CC BY

ALONG THE ROOFTOPS
Emerging from the window of the veterinary room, the wolf leapt up on to the roof of the building.  It still had the chain that been used to tether it attached to its collar.  Either the chain had been wrenched free from its anchor-point by the struggling creature, or it had been left unfastened by a negligent keeper.

Anyone passing Exeter Change who happened to look up—although now that the winds had abated there was perhaps less reason than before to clasp one’s hat and tip one’s head back to inspect the state of the sky—would have seen at a glance that the matter was serious.  If the wolf dropped down from the roof—say on to the second-floor balcony—it had only to leap once to gain the Strand.  Even if the keepers inside Exeter Change had known what was happening, would they have had time to snatch spears and pikes and avert disaster?  The Strand was a busy street, and, in spite of the wet and windy start to the day, the shops that lined the arcade inside the Change had many customers.  Their thoughts were much more likely to have been on cutlery and umbrellas than on the chances of an encounter with a fugitive wolf.

ENTER THE WOLF
Such a delicately poised emergency must have been Edward Cross’s abiding nightmare.  But the wolf, rather than jumping down into the street, did something entirely unexpected.  Master at last of its own movements after breaking free of the tether, and free to wander at will unshackled and unrestrained, it had loped across two rooftops.  Now it was perched on a third rooftop, that of 353 Strand, the five-storey premises of William Day, trunk-maker and holder of a royal warrant and of a patent for an expanding and contracting design.  There were signboards above and below the windows on every floor, and it was on to one of these signboards, just beneath the sill of the fourth-floor window, that the wolf would eventually emerge.  But first it pulled another nasty surprise, by going through an open skylight that led directly into Mr Day’s premises. 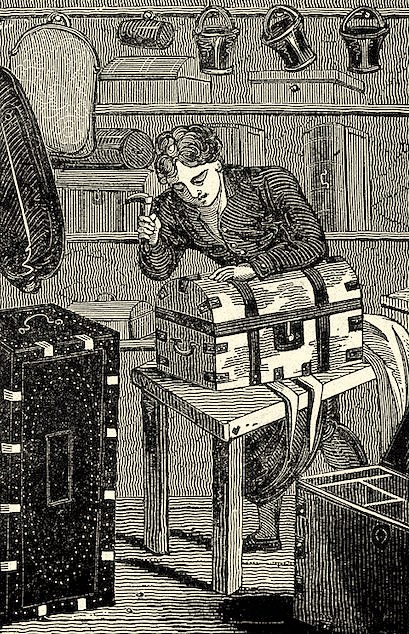 A man is hammering metal strips on to a trunk he is making.  Credit: Wellcome Collection  CC BY

Several men, employees of the royal trunk-maker, were working in the room beneath the skylight, patiently carpentering the wooden carcasses, engineering the moving parts, covering the wood with leather, and decorating and protecting the leather with rows of brass studs.  Although they were absorbed in what they were doing, the clank of the chain that the wolf was dragging behind it made them look up.  Fleeing from the room in terror they closed the door firmly behind them.

ALL OVER NOW
The wolf was momentarily trapped, and, being unable to spring back up to the skylight, it nosed its way round the room until it reached the window, which was open wide enough for it to push its way through.  Teetering on the signboard, and eyeing another window that was open wide on the fourth floor of the adjoining building, it jumped.

But the jump was futile: the chain round the wolf’s collar had become entangled in the brace supporting the signboard, and it fell fatally short of the window.  Plummeting down towards the street, it hit the pavement with sickening force.  For a while it gasped and writhed.  Then it ceased to move.

No doubt the citizens in the crowd that had gathered in the Strand were mightily relieved.  But the newspapers saw the pathos in the creature’s demise.  “The blood flowed from his mouth,” reported The Morning Post,  “and after a few gasps the poor wolf expired.”  As for Edward Cross, he may well have wondered how on earth he was going to explain all this to the Duchess of York.  How would a woman who flew into a rage if anyone hurt one of her dogs take the news of the death by misadventure of her wolf?

SOURCES
This post is based on a story published in newspapers on the 3rd of March 1820.